Global wealth and power are shifting eastwards. In parallel, we are moving from an open and consensual international order to one defined more by competition and zero sum politics. The fevered geopolitics of our times will define the course of war and peace in the 21st century.

Against this backdrop, and for the second year running, my colleagues and I have assessed 25 countries and territories in terms of what they have, and what they do with what they have – reaching as far west as Pakistan, as far north as Russia, and as far into the Pacific as Australia, New Zealand and the United States.

The 2019 Asia Power Index – which will be launched today in Singapore at the Lee Kuan Yew School of Public Policy – has been expanded to 126 indicators across eight thematic measures of power. It features over 30,000 data points through a specially designed digital platform. One of the benefits of repeating this painstaking exercise annually is that we can start to track the nature, speed and extent of shifting relativities over time.

Our 2019 findings make clear that the balance of power will be determined by more than the sum of economic resources alone. It is equally, if not more, a matter of choice, initiative, networks and influence among countries contending with shifting relativities. 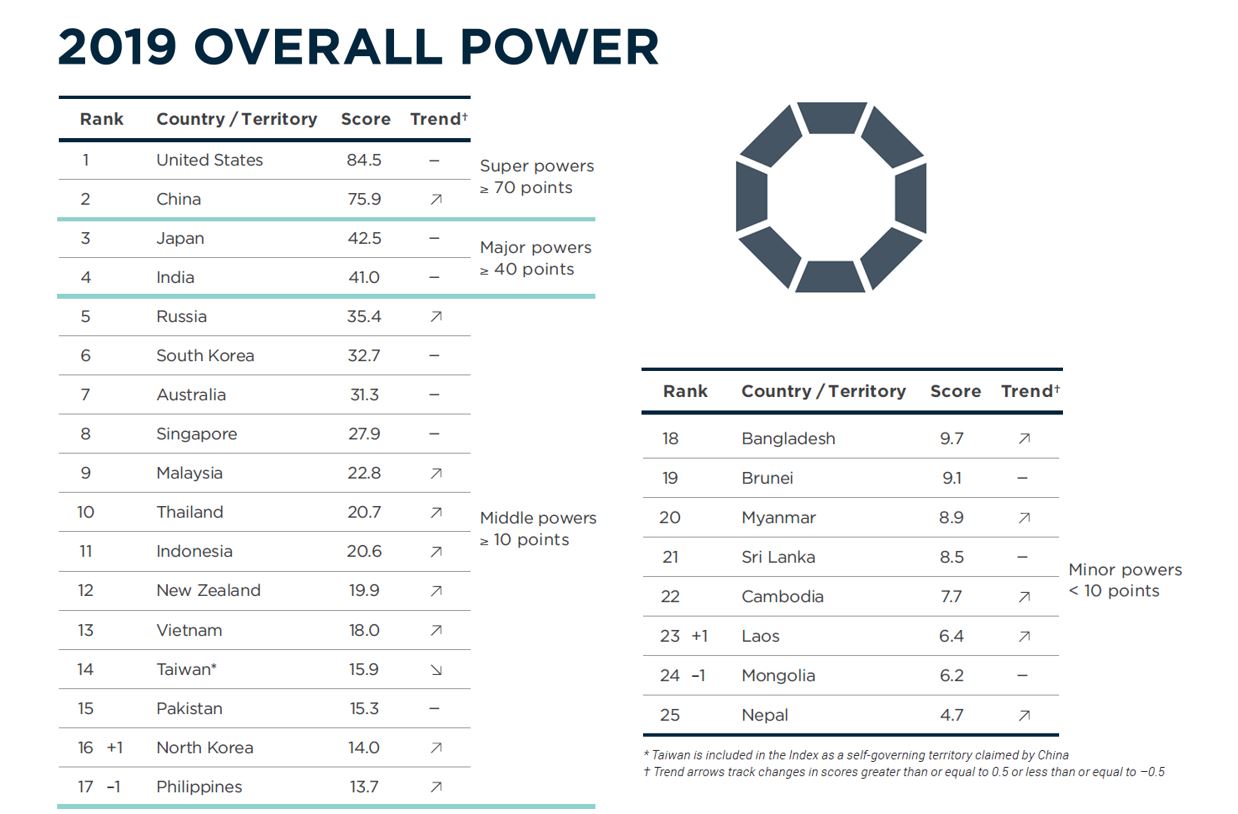 Here are five big takeaways gathered from a year of research:

1. The United States remains the pre-eminent power but has become a net underachiever in 2019

The United States claims the top spot in four of the eight Index measures and its overall power score – the only country to top 80 points – remains unchanged from last year. Yet under most scenarios, short of war, the United States is unlikely to halt the narrowing power differential between itself and China.

America is still the dominant military power – reflected in the depth of its regional defence networks – as well as the most culturally influential power, as the leading study destination and source of foreign media in the region. Combined with strong demographic and geographic fundamentals, these results go some way to dispelling the notion that US power is in absolute decline.

Nevertheless, the United States faces relative decline. A 10-point lead over China in 2018 has narrowed to 8.6 points in 2019. Current US foreign policy may be accelerating this trend. The Trump administration’s focus on trade wars and balancing trade flows one country at a time has done little to improve the glaring weakness of US influence, its economic relationships. The obvious contradictions between Washington’s revisionist economic agenda and its role, as a status quo power, of providing consensus-based leadership have contributed to its third place ranking, behind Beijing and Tokyo, for diplomatic influence in Asia.

The United States has moved from a positive to a negative Power Gap in 2019, indicating it has become less effective at converting its resources into broad-based influence in Asia. 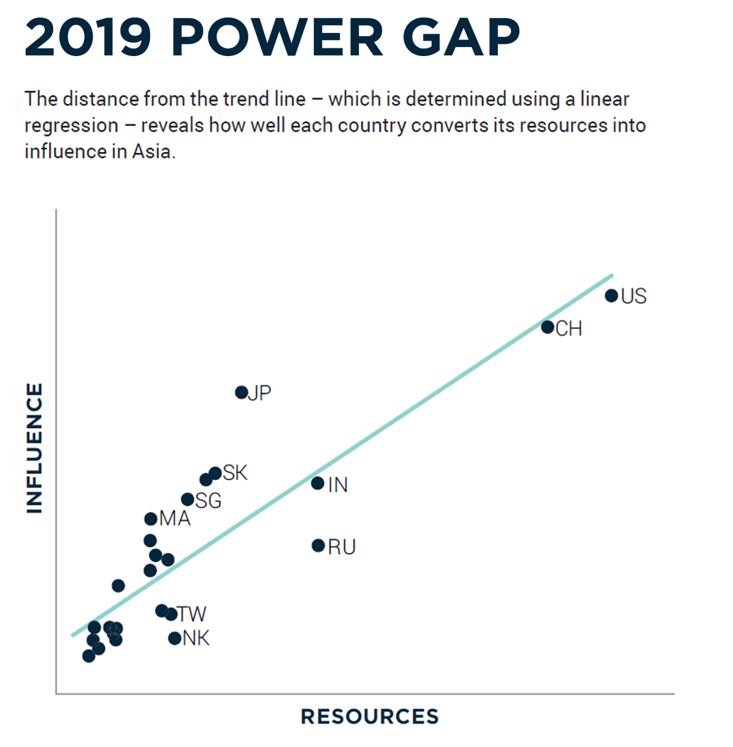 2. The biggest challenger to China’s rise is not the United States but itself

China, the emerging superpower, netted the highest gains in overall power in 2019, ranking first in half of the eight Index measures.

For the first time, China narrowly edged out the United States in the Index’s assessment of economic resources. In absolute terms China’s economy grew by more than the total size of Australia’s economy in 2018. The world’s largest trading nation has also paradoxically seen its GDP become less dependent on exports. This makes China less vulnerable to an escalating trade war than most other Asian economies.

Access to Western markets will likely prove increasingly marginal to the global ascendancy of Chinese tech. The country’s consumer base is making large-scale implementation of new technologies such as 5G easier to achieve at home, before being rolled out into emerging markets.

Beijing has chosen to concentrate its resources and modernisation efforts on its near abroad in contrast to America’s global military posture and security commitments. Within its region, China’s defence budget is 56% larger than those of all 10 ASEAN economies, Japan and India combined.

Despite steady advances, however, Beijing faces political and structural challenges that will make it difficult to establish undisputed primacy in the region.

Beijing’s hard power remains hobbled in key respects. China’s ninth place for defence networks – up three places from 2018 – still constitutes its weakest performance across the measures of power. As the People’s Liberation Army’s presence in contested spaces grows, so too do efforts by other powers to create a military and strategic counterweight in response.President Xi Jinping’s flagship Belt and Road Initiative faces growing degrees of opposition. In many cases – from Malaysia to Myanmar – this has resulted in renegotiations resolved in favour of the borrower.

Beijing also faces growing internal hurdles: China’s workforce is projected to decline by 158 million people from current levels in less than 30 years. This likely presages societal and economic challenges. By mid-century, China’s total population will also be approximately 20% smaller than that of India, a growing potential regional rival. 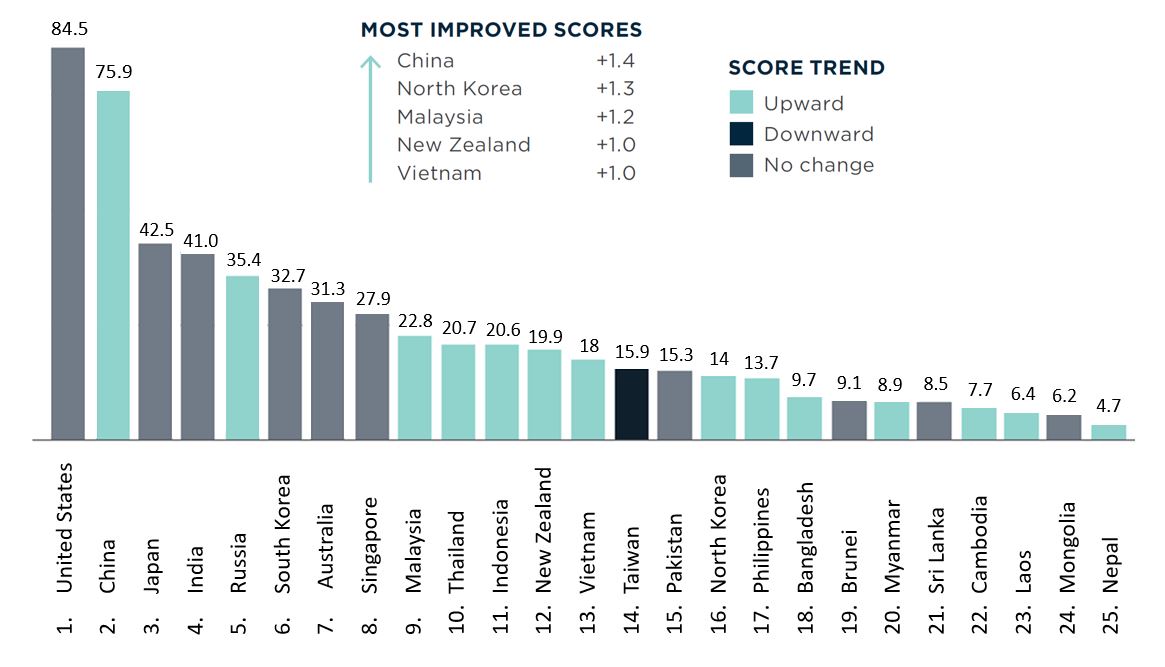 3. Japan has become the leader of the liberal order in Asia, while India will not be the next China

There is often a temptation to reduce the complexity of Asia’s international order to a two player game. In reality the Indo-Pacific ecosystem is sustained by a much wider array of actors.

Japan and India, the third and fourth ranked powers, are separated by oceans, distinct geopolitical contests and legacies, and vast demographic differentials representing young and old Asia. However, both major powers must contend with fading US strategic predominance and the sharpening ambition of China.

Japan is the quintessential smart power, using the country’s limited resources to wield a top-four ranking across the four influence measures. It finishes in the top two, only six points behind China, for diplomatic influence. Maintaining a liberal order has become a key organising principle under the premiership of Shinzo Abe. Tokyo successfully resuscitated the Trans-Pacific Partnership (TPP) in 2018, which became the TPP-11 together with 10 other economies minus the United States.

Japan has also proven a capable rival to China for infrastructure investment in South and Southeast Asia. Over the past decade, Japan has been the dominant foreign investor in strategically pivotal countries as varied as Mongolia, Myanmar, the Philippines and Thailand. 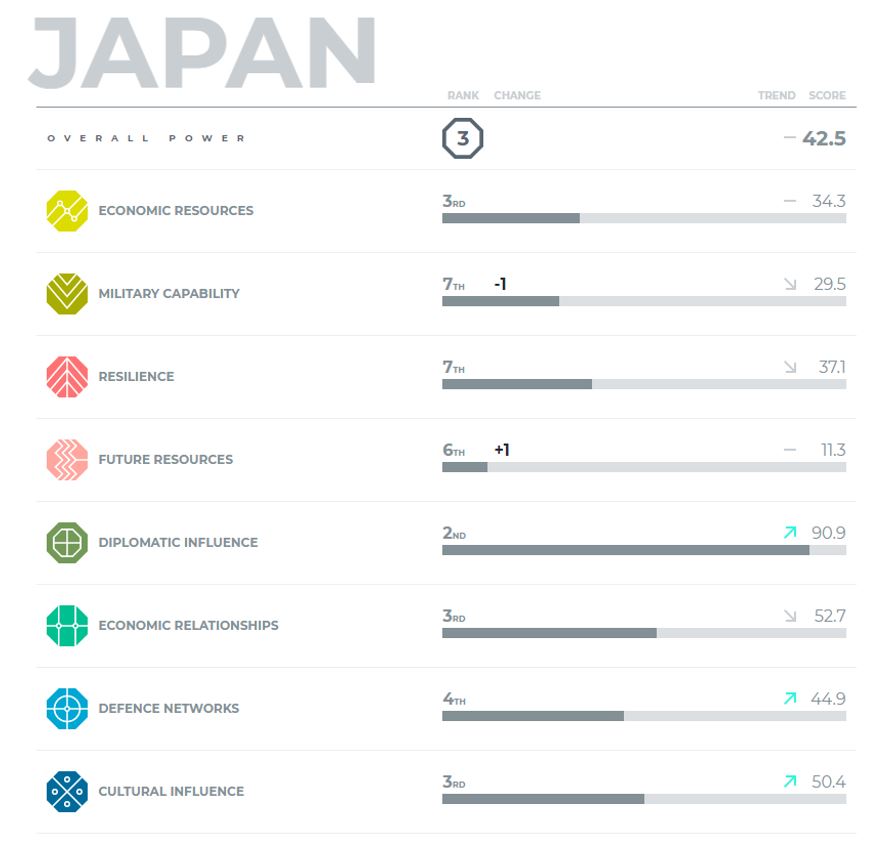 Whereas Japan is an overachiever in long-term decline, India is an underachiever relative to both its size and potential. Despite Prime Minister Narendra Modi’s Act East Policy, New Delhi trails in sixth and eighth place for economic relationships and defence networks, and is down two places in diplomatic influence in 2019.

What India lacks in influence it makes up for in scale. India’s economy is predicted to double in size and reach approximate parity with the United States by 2030.

Tokyo has cultivated strategic ties with New Delhi. Yet they are unlikely bedfellows. Unlike Japan which operates within a US-dominated alliance system, India will continue to cherish its strategic autonomy.

Moreover, India will not be the next China. New Delhi lacks the control over the allocation of economic resources, which has been intrinsic to China’s rise. Yet as the giant grows in uneven and incremental steps, so too will its ambitions. 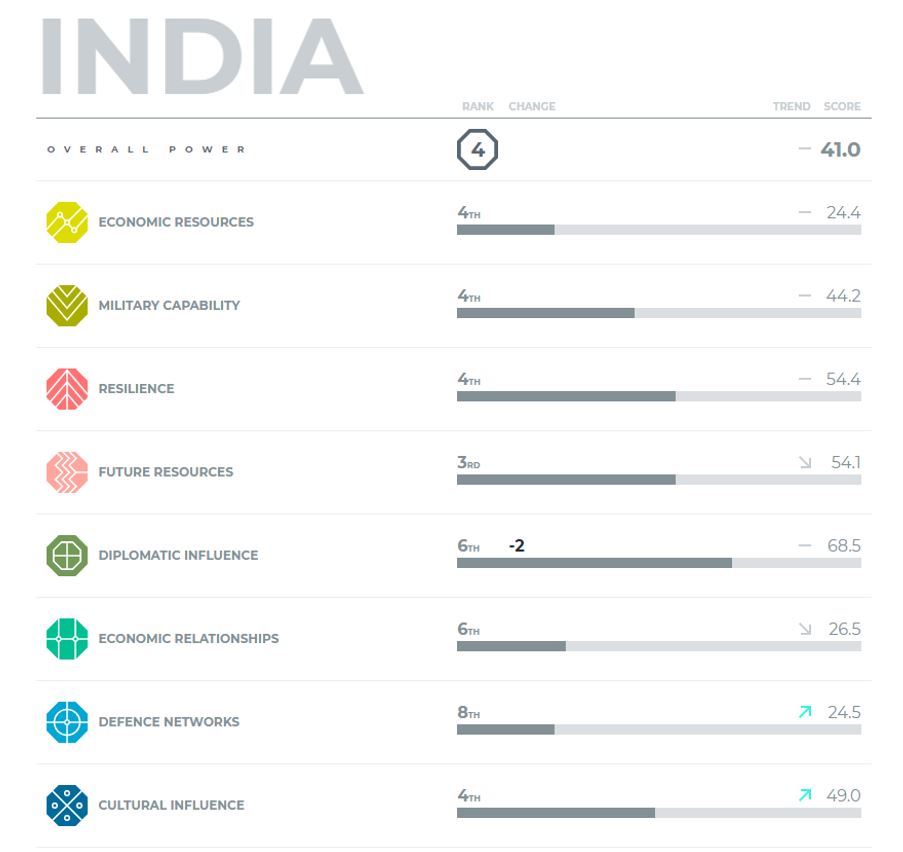 4. North Korea’s high-stakes power game pays off in 2019 but is far from complete

A diverse set of middle powers have made gains in their overall power in 2019. North Korea overtook the Philippines, now relegated to 17th place, registering the largest increase in its overall power score after China. The nuclear power jumped five rankings in diplomatic influence, albeit starting from a low twenty-first place, in the year following the first-ever meeting between the leaders of North Korea and the United States.

Summit diplomacy in Singapore and Vietnam – ostensibly on equal terms with the United States – has elevated and partly normalised North Korea’s regional standing and ties. However, Pyongyang remains a brittle power preoccupied by its survival. The risk of a lapse into further crises is high.

In a dynamic part of the world, North Korea’s economy is estimated to be smaller than that of Laos. Pyongyang’s nuclear weapons and intercontinental ballistic missile capabilities are one of the few credible sources of leverage it has to compete with larger powers. This raises questions about what can realistically be achieved on denuclearisation. The country has moved up one ranking in military capability, with the sixth most powerful conventional military force in Asia. Only China and India have larger standing armies.

If the risk of renewed conflict on the Korean Peninsula has receded it is in large part due to the creative diplomacy of South Korea’s President Moon Jae-in. The larger, more democratic and prosperous Korea has moved up two places to fourth for diplomatic influence. However, the suspension of joint military training exercises announced by the United States as a concession to North Korea in 2018 has also seen South Korea drop one ranking for the depth of its alliance under defence networks.

5. Malaysia, Vietnam and New Zealand are the most improved middle powers after North Korea. Australia’s power is flat while Taiwan’s is down

Malaysia has fared better in the last year across the Index’s influence measures, where it has resumed its standing among the top 10 most diplomatically influential powers in Asia.

The re-elected Prime Minister Mahathir Mohamad has refocussed his attention on the geoeconomic security and bargaining power of middle powers faced with great power rivalry and turbulence in the Trump–Xi era. He has succeeded in obtaining more favourable terms for foreign-funded infrastructure projects while maintaining close ties to Beijing.

New Zealand’s improvement in diplomatic influence to 11th place in 2019 stands in marked contrast to a fall in Australia’s diplomatic standing – to eighth place, behind Indonesia –following political infighting and a leadership change in 2018. NZ Prime Minister Jacinda Ardern is ranked fourth among leaders in the region in terms of ability to advance her country’s diplomatic interests globally. With a fresh electoral mandate, Australian Prime Minister Scott Morrison will first need to prove his durability if he wants to form lasting partnerships with his regional counterparts. 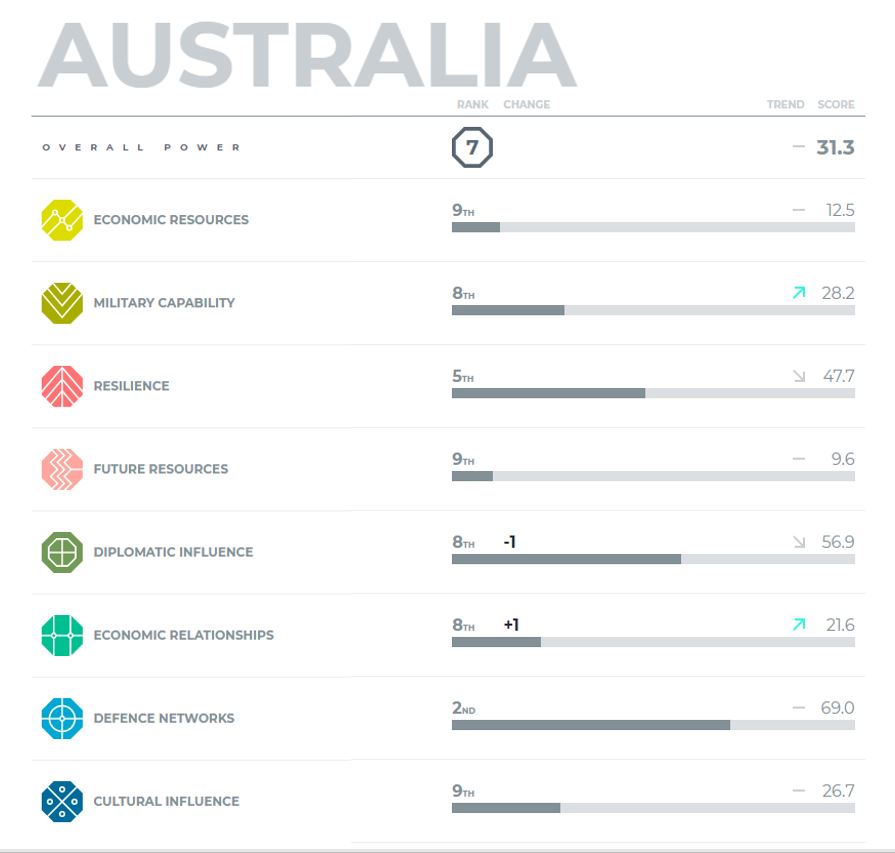 Australia and New Zealand retain the most favourable strategic geography in the region: the same cannot be said of Vietnam or Taiwan whose locations in contested waters south of China play directly into their strategic vulnerability. Vietnam has made rapid progress in strategic and economic spheres. Current trend projections place it tenth for future resources.

By contrast, Taiwan has become the only middle power in the Index to register a significant downward shift in overall power from 2018. The island – ranked 14th for overall power – is crucially important to the regional balance of power.  Taipei’s fall in power betrays its geopolitical significance but reflects its position as a political outsider.