The Lowy Institute’s Multiculturalism, Identity and Influence Project looks at the efforts of foreign governments to influence and possibly interfere in Australian society, and the impact of these efforts on Australian democracy and multiculturalism.

Australia’s Multicultural Statement states that Australia is the most successful multicultural country in the world. Further research is needed about the way in which foreign governments may work through foreign language media or culturally and linguistically diverse communities to further their own objectives. Government responses to these efforts should be informed by evidence directly from affected communities.

The Multiculturalism, Identity and Influence Project, supported by the Australian Department of Home Affairs, will draw on quantitative and qualitative analysis to provide evidence-based policy options and fill some of these gaps in the discourse around multiculturalism and foreign policy. Responsibility for the views, information or advice expressed in this project are those of the author/s, and do not necessarily reflect the views of the Lowy Institute or the Australian government.

Conversations: Being Chinese in Australia - Public Opinion of Chinese Communities

In this episode of Conversations, Jennifer Hsu talks with Natasha Kassam and Richard McGregor about the results of the second Lowy Institute’s Being Chinese in Australia survey report and contextualises these findings in Australia’s federal election campaign of 2022.

The Shanghai lockdown following a Covid-19 outbreak last month saw the most stringent restrictions placed upon a Chinese city since the pandemic began. Although Chinese civil society may be heavily circumscribed, a stituation exacerbated by Covid, civic action and protests have continued to occur throughout the country over the last two years.

Voices of April, an online video that has gone viral, documents the current reality in Shanghai. It contains a collection of audio snippets of official government announcements interspersed with the voices of Shanghai residents describing their ordeal during the lockdown. It documents the human suffering caused by China’s harsh zero-Covid policy, where the cry of a baby can be heard as it is separated from its parents under strict quarantine rules.

Since its initial posting on Chinese social media platforms on 22 April, the video has been shared widely across WeChat and Weibo. But as with all things viral and seemingly critical of government policies, the video was swiftly taken down and references to it, such as “April” were censored. An online backlash ensued and Chinese netizens found creative ways around the censorship, for example, posting the video upside down or embedding it in cartoons. However, the author of the video has now apparently urged people to stop re-sharing it as he doesn’t want it distributed in directions he never intended.

As one man in the Voices of April noted, “The virus won’t kill us, but hunger can.”

The very act of reformatting the video to dodge censors, along with posting and sharing are indicative of the vibrancy of collective action in China today, albeit online. These online collective actions are not unique to Shanghai. The death of Dr Li Wenliang, one of the whistle-blowers at the onset of the pandemic, and the censuring of his social media posts as he tried to warn the public about the virus, generated similar online mobilisation. Images of doctors Li Wenliang and fellow whistle-blower Ai Feng, along with accompanying stories and posts, have been reformatted and shared in various ways by millions of netizens.

Wuhan’s April 2020 lockdown might have shown greater national resolve and support for harsh government policies, but in the two years since then, China and the world have learnt something about the virus and that knowledge – however limited – may very well sow division. As one man in the Voices of April noted, “The virus won’t kill us, but hunger can.”

It might be easy to assume that China has been devoid of civil society activity since the onset of Covid-19 or even since President Xi Jinping came to power, but that is not the case. Under Xi’s turn to authoritarianism over the past decade, collective action has continued to grow, and certainly hasn’t been confined to online. In 2020, the number of labour strikes across all sectors of China’s workforce totalled 801. By the end of 2021, this number had increased to 1,093.

Nevertheless, the confluence of Covid-19, zero-Covid policy and existing restrictions on Chinese civil society presents a bleak picture. With the 20th National Party Congress around the corner, any activism will be stamped out quickly. If there is a silver lining, it may be that the nature in which Voices of April has been shared shows just how connected Chinese citizens are to global online civil society, despite the Great Firewall.

Five key findings from the Being Chinese in Australia survey

Australia is home to more than 1.2 million Chinese-Australians, some five per cent of the Australian population. Their experiences are as diverse as their views: many were born in Australia, with lineages that span generations of Australian history. Others have migrated more recently from China, Hong Kong, Taiwan and Southeast Asia.

Many Chinese-Australians report being uniquely affected by Australia’s fraught relationship with China, the foreign interference debate and the Covid-19 pandemic. The second year of the Lowy Institute’s Being Chinese in Australia survey continues to show a broad diversity of opinion within these communities. 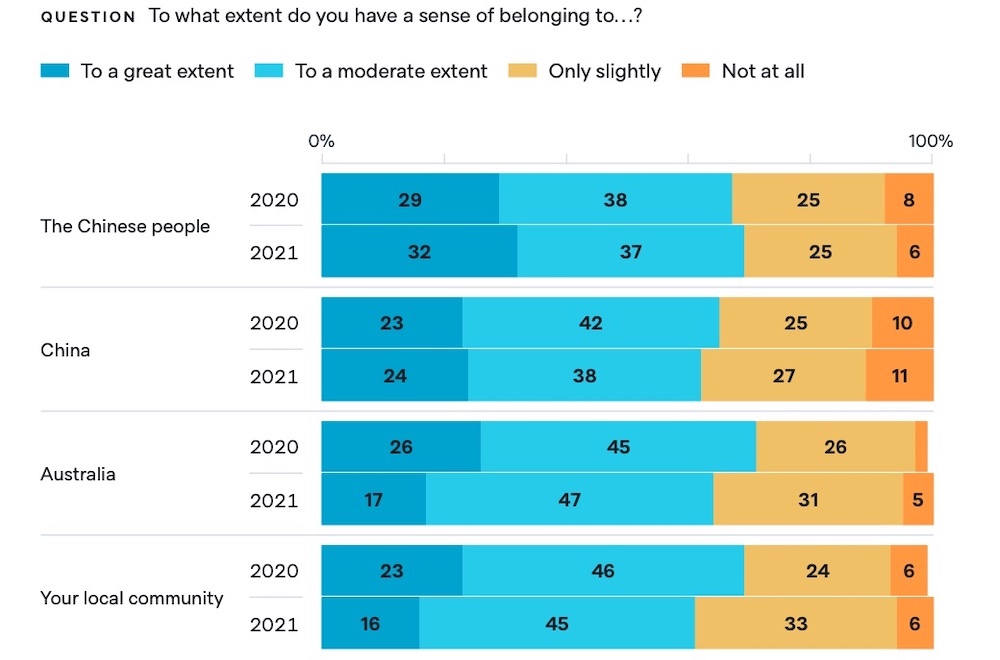 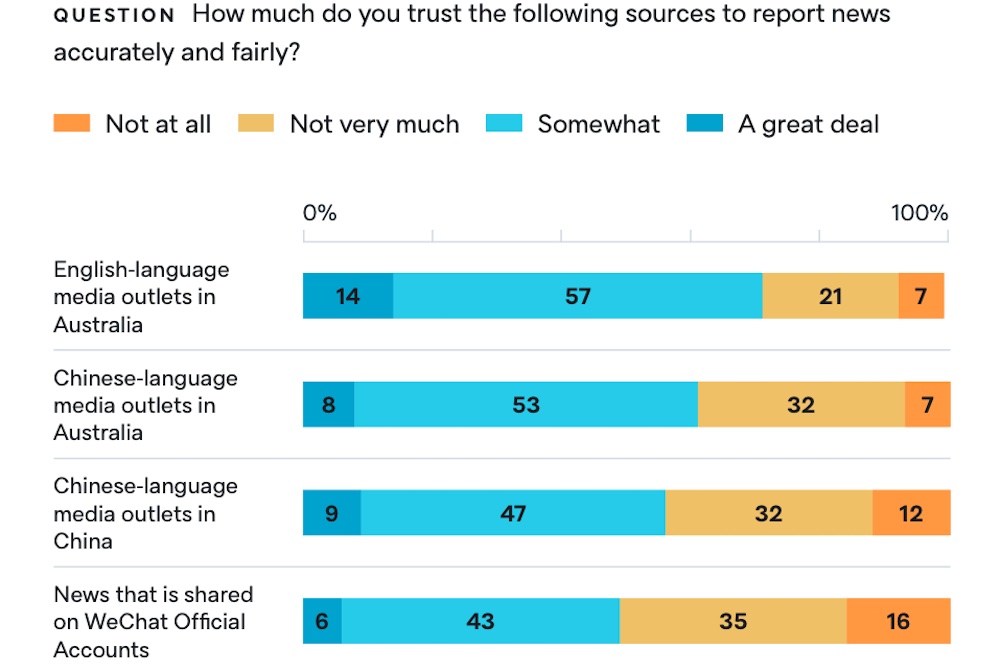 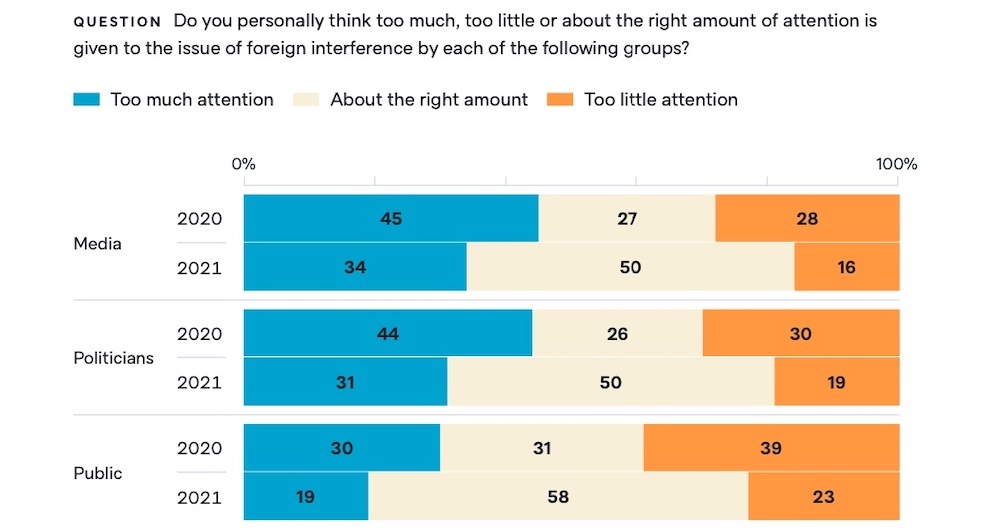 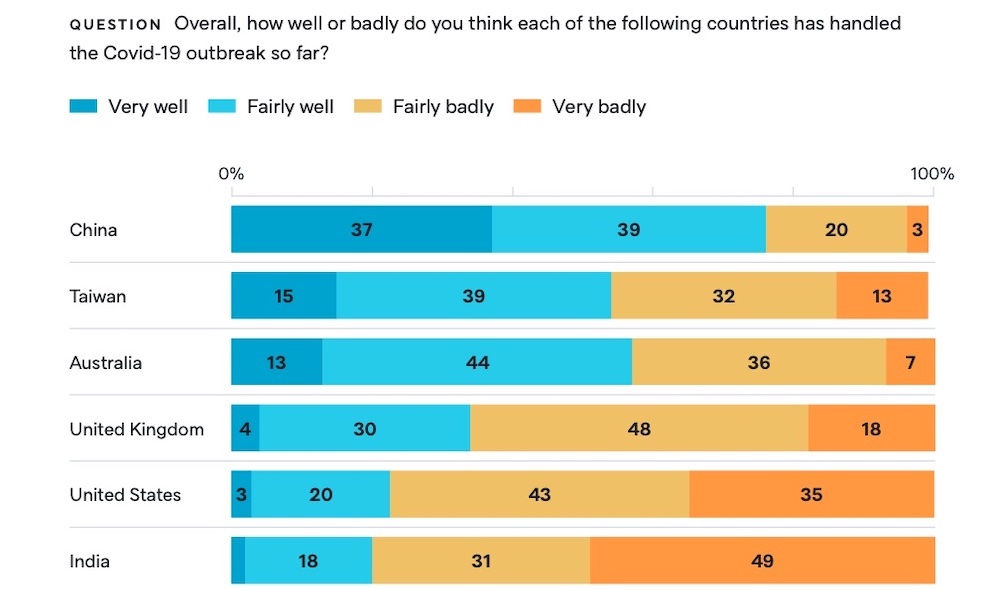 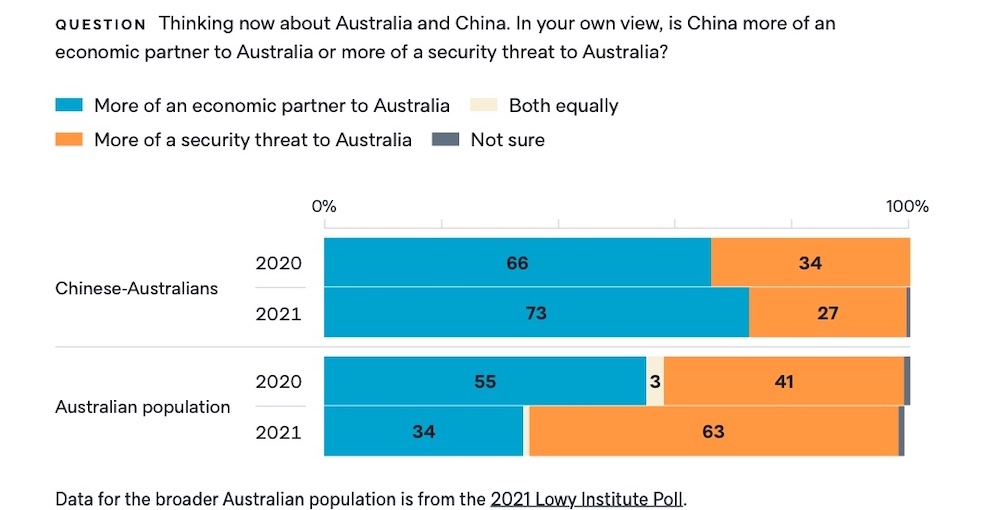 Being Chinese in Australia: Public Opinion in Chinese Communities reports the results of a national survey of 1002 adults in Australia who self-identify as of Chinese heritage. The survey was conducted between 16 September and 24 October 2021. The Social Research Centre (SRC) conducted the non-probability online survey using the Multicultural Marketing and Management (MMM) panel.

Being Chinese in Australia Poll

The release of the second annual Being Chinese in Australia: Public Opinion in Chinese Communities survey is one of the largest studies of attitudes among Chinese-Australians ever undertaken. The poll adds much needed context and understanding of an important, but often misinterpreted, part of Australian society.

Polling by Russian Field at the end of February indicated that a majority of Russians (59 per cent) supported Vladimir Putin’s “special military operations” in Ukraine. Yet, the longer the war goes on in Ukraine, and the more restrictive international economic sanctions become, factors from outside Russia will not only dent his popularity but ultimately his grip on power.

With Russia and China now linked together as an “arc of autocracy”, in Australian Prime Minister Scott Morrison’s phrase, just how similar are Putin’s and Xi Jinping’s regimes and their ability to withstand challenges to their grip on power?

Personalist regimes such as Putin’s sustain the loyalty of their supporters by granting access to material goods and rewards. Such leaders become vulnerable during periods of economic uncertainty. Levada Center’s Denis Volkov has noted that Putin will go to great lengths to engineer gravity-defying favourability ratings, to distract attention from domestic economic woes and repression. Immediately after the annexation of Crimea in March 2014, for example, Putin’s approval rating jumped to stratospheric levels, finally reaching a record high of 88 per cent in October (allowing the challenges of polling in a country such as Russia). Volkov has also shown how Putin similarly boosted his popularity following the Second Chechen War in 1999 (before he became president) and Russian-Georgian War in 2008. These conflicts occurred against the backdrop of Russia’s declining economy and the devaluation of the rouble, all of which would hurt Russians’ everyday living standards, and ultimately Putin’s popularity.

Now economic trouble looms again. In December 2021, World Bank forecasts for the Russian economy was one of caution. Economic growth rebounded to 4.3 per cent in 2021 but is expected to slow to 2.5 per cent in 2022 and to 1.8 per cent in 2023. Throw in international economic sanctions and the cost of war, the risk to Putin’s popularity become plain. The rouble has already lost 40 per cent of its value. Russians are anxious and are dashing to banks and ATMs to withdraw their money. Middle-class Russians who have come to rely on the same modern conveniences found in the West, such as using Apple Pay or Google Pay, suddenly find themselves cut off.

China can offer Russia a lifeline to in part circumvent these sanctions. However, Levada Center’s polling in December 2021 indicates 51 per cent of Russians say that Russia and Ukraine should be independent, yet friendly, countries. Putin’s durability is obvious, given his record of coercive tactics against domestic opponents and the significant resources dedicated to propaganda. But an economic crisis is likely to destabilise the material foundations of Putin’s rule. With ever fewer resources to hand out, Putin will face a growing problem of how to maintain control of his allies and supporters.

The CCP’s control over the allocation of government jobs, educational opportunities and party positions, ensure the loyalty or at least the compliance of China’s best and brightest.

China holds different lessons. Single-party regimes, like that of the Chinese Communist Party, are generally more resilient than personalist regimes. Even after Xi removed the two-term limits to the presidency in 2018, shifting China to a more personalist regime, the institution that buttresses China (i.e. the CCP) make it relatively easier for political participation, as incongruous as that may sound. Legalised opposition parties are possible in single-party governments, and China is no exception with eight minor parties holding seats in the National People’s Congress (NPC) and the NPC Standing Committee.

The CCP’s control over the allocation of government jobs, educational opportunities and party positions, ensure the loyalty or at least the compliance of China’s best and brightest. This control and distribution of resources by the CCP contribute to the high levels of satisfaction felt towards the central government, as Harvard researchers found in their longitudinal study of Chinese citizens’ satisfaction.

There is no seemingly imminent threat to the CCP or Xi. However, neither the Party nor Xi should take that for granted. Measurable changes in an individual’s material well-being are ultimately what gives the Chinese Party-state high approval ratings. For citizens who have grown used to year-on-year improvement in their material well-being, when policy failures affect their quality of life, the Party-state will be directly in the firing line of citizens’ discontent.

So amid talk of the potential for China to learn from the Russia invasion of Ukraine for its own desires over Taiwan, it appears a hostile take-over of Taiwan will not only be unpalatable but potentially disastrous given what is unfolding in Russia.

The potential effect of sanctions and the cost of war in Ukraine are factors that will undermine the material foundations of Putin’s rule in Russia. Without such foundations supporting his personalist regime, Putin may find it difficult to hold on to power in the medium to long term. Whereas for Xi who still relies on the institutional structures of the CCP to legitimise his rule, the danger for him is to deviate too much into a personalist regime like that of Putin’s thereby significantly altering the political balance from party to the leader.

Can China win back global opinion before the Winter Olympics? Does it even want to?

Originally published in The Conversation.

In this episode of Conversations, Jennifer Hsu talks with Fan Yang and Fergus Ryan about the media representation of Australia-China relations, WeChat, self-censorship and the pressures faced by Chinese-language media outlets in Australia.

A new report into Australia’s Chinese-language media content examines the news landscape of one of the country’s largest diaspora communities.

What to read, watch and listen to in November

"I am not your model minority": Atlanta shootings highlight fears in Asian-American communities

Australian Chinese support for democracy is over 80%, the source of information is WeChat

Nearly one in five Chinese-Australians threatened or attacked in past year, survey finds

Chinese Australians must not be blamed for China’s policies