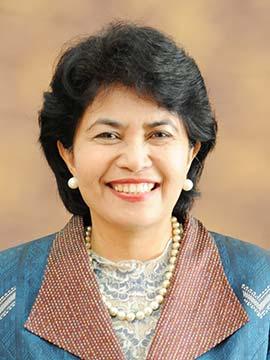 Dewi Fortuna Anwar straddles the world of academia, political activism and government. She is a Research Professor at the Research Center for Politics-Indonesian Institute of Sciences (P2P-LIPI) and was the Deputy Chairman for Social Sciences and Humanities-LIPI (IPSK-LIPI) from 2001 to 2010. Dewi is also the Chairman of the Institute for Democracy and Human Rights, The Habibie Center, a private think-tank based in Jakarta. From August 2017 to August 2018 she is Distinguished Visiting Professor at the S. Rajaratnam School of International Studies, Nanyang Technological University, Singapore. Between October 2010 and May 2015 Dewi served as Deputy Secretary for Political Affairs, and from May 2015 to February 2017 as Deputy for Government Policy Support to Vice President Boediono and Vice President M. Jusuf Kalla of the Republic of Indonesia respectively. In 1998-99 Dewi served as Assistant Minister of State Secretariat for Foreign Affairs during the Habibie Presidency. In 2015 Dewi was appointed a member of the Indonesian Academy of Sciences (AIPI).  She has written widely on Indonesia’s foreign policy, Indonesia’s democratization as well as on ASEAN and regional political and security issues. Dewi was a Visiting Fellow at CSEAS, Kyoto University in early 2010, a Visiting Professor at SAIS, Johns Hopkins University in 2007, and a Visiting Fellow at ISEAS, Singapore in 1989.  Dewi sits and has sat in a number of national and international advisory boards. She is currently a member of the Governing Board of SIPRI and a Board Member of Shift, based in New York. She served as a member of the Weapons of Mass Destruction Commission (WMDC) in 2004-2006, and a member of the UN Secretary General’s Advisory Board on Disarmament Matters in 2008-2012. Dewi was an APSA Congressional Fellow at the U.S. Congress in 1990-1991. She obtained her PhD from Monash University, Melbourne in 1990, while her M.A. and B.A. (Hons) were from the School of Oriental and African Studies (SOAS), University of London in 1982 and 1981 respectively.