The war of the cold words: Russia, the West and propaganda 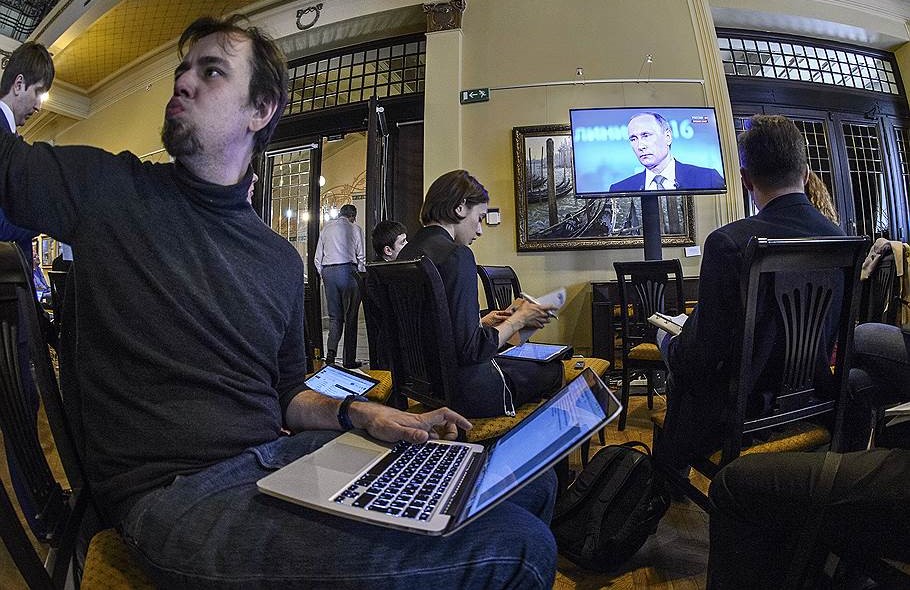 Superficially, Russian Culture Minister Vladimir Medinsky’s recent claim that Netflix was a CIA plot resembles another excitable pronouncement from a Kremlin hierarchy increasingly out of touch with reality. The same goes for the regularly inflammatory comments of Dmitry Rogozin, the possible successor to Vladimir Putin, who famously warned the West in 2015 that ‘tanks don’t need visas’, and that the West would crumble ‘under pressure from ISIS and gays’.

Russia’s accusations against the West are often bizarre, and not always the product of a Soviet-style misinformation monolith. But many are also carefully calculated. For one thing, a great many Russians earnestly believe the anti-Western line emanating from the Kremlin. That includes leading members of the academic intelligentsia, who are often cast as progressives or moderates in internal debates. Moreover, Russia’s confected anguish sometimes overshadows legitimate grievances, like its claim that the US reneged on its promise not to expand NATO following the USSR’s breakup.

These factors — widespread domestic acceptance and a kernel of truth — are two markers of effective propaganda. Beginning in the mid-1990s, and reinforced later by Putin, Russia has constructed a narrative offering its people hope in the face of declining national capacity, and an alternative worldview for international consumption.

The Russian ‘story’ is simple. The West is declining, and waging an information war against Russia. The EU is bankrupt, both economically and spiritually, and will soon collapse. Its member nations will realise that taking control of their national affairs through sovereignty is the only way to avoid communal disaster from a failed supranational experiment. Tellingly, ‘Brexit’ is proof positive that this is beginning to occur.

On the other side of the Atlantic, or so the narrative goes, America is overstretched. Its pivot East shows its attempts to maintain global hegemony have led to exhaustion. Public pressure will lead to internal demands for retrenchment, an abandonment of liberal trading regimes, new protectionism, the weakening of security alliances and the fragmenting of the current ‘rules-based’ order (and interestingly, these views are also starting to circulate in the West as well).

Amid this turmoil, Asia will be the engine room of economic globalisation and the refocusing of global laws and norms around the principle of non-intervention. And, due to its Euro-Pacific geopolitical footprint, its energy reserves and large military machine, Russia will be a ‘natural’ major player in the new global power configuration.

This is — of course — hugely hypocritical. Even under Putin, Russia earnestly wanted to join the EU, and NATO as well. But being left out of what the Kremlin sees as sclerotic organisations propping up Western primacy also gives Russia another essential component of propaganda: someone to blame.

For Putin, if domestic publics and well-respected figures within them buy into such ideas, they can become self-reinforcing. And if enough doubt can be introduced into the minds of publics in the West — as well as places where Western influence is diminishing like the Middle East — then this links propaganda to a country’s capabilities.

In other words, propaganda can be an instrument of national power. That isn’t new, of course. Propaganda leaflets have been used since their distribution by air became technologically feasible. Radio broadcasts by Nazi Germany’s William Joyce (nicknamed ‘Lord Haw Haw’) and Japan’s ‘Tokyo Rose’ were deployed to sow futility in the minds of citizens and soldiers. During the Cold War, both sides earnestly engaged in information campaigns using an array of sophisticated techniques. The samizdat dissident networks in the Warsaw Pact countries owed much to covert Western assistance, and the information they distributed — in both directions, thanks to penetration by Soviet intelligence services — was frequently inaccurate. That the West also uses propaganda today is undeniable. But what generally differentiates democracies from authoritarian systems is the distance between the state and the disseminator.

Hence, while the intentions behind using propaganda have not changed, globalisation has ensured that the context of its employment certainly has. National power is changing. Conventional measures, like how big one’s army is, the size of a nation’s economy and the extent of its natural resource base are all still important. But power is increasingly about what you do with it in respect to others, and above all how it is perceived. In other words, power is relational. And the best way to affect perceptions is through the use of information. Where we go wrong is in automatically believing that information needs to be truthful. Actually, it has no such requirement. What is necessary is that it is disseminated effectively, to the right audiences and with just enough plausibility to make the marketplace for ideas more congested.

This speaks to an apparent weakness of so-called ‘soft’ power. Joseph Nye famously defined it as the ability to get others to ‘want what you want’, although it is equally about getting others to reject what they have. Previously it has been difficult for a state to actually use it in a meaningful, directed sense to yield swift measureable outcomes. The strength of one’s culture, one’s ideas, its prosperity and ability to provide the ‘good life’ is tricky to deploy as a goal-oriented foreign policy instrument.

As Russian propaganda demonstrates, globalisation is changing that calculation. A reliance on technology and rapid information flows allows the modern propagandist to achieve three general objectives much more quickly than before:

Cyberspace has proven an excellent incubator for these techniques. These techniques are increasingly sophisticated and able to be targeted to the browsing habits of individuals. News stories can be populated with bots offering a variety of ideational nudges in the comments sections. One of the commonest involves the use of a stereotypical profile picture of a woman in a bikini with a gently critical comment designed to appeal to a particular audience (‘My grandfather fought in the war alongside Americans. Why can’t we get along? If only your leaders were less mistrustful’). Others might include a picture of a Bible (‘Russians and Americans both love God. We should be friends’). Fake news reports often appear on Russia Today and Sputnik, and often make their way into Western media sources through lax fact-checking. At the sharper end, cyberspace is also an enabler of hybrid warfare. Russia’s conflict with Ukraine continues to combine military operations with offensive cyber capabilities through DDOS attacks against Ukrainian communications and power infrastructure, the installation of malware to hijack IT systems and the planting of fake reports.

The trouble with contemporary propaganda is that it is very difficult to tell which are genuine state-sponsored disinformation campaigns. Some news stories are dubious, some are simply oddities and some seem to fall somewhere in between. This can be the case in the West too, like the report in The Australian in January 2016 claiming Vladimir Putin was a pedophile. With little to distinguish reliable sources from unreliable ones, it is little wonder that democratic publics are confused about where information comes from, and increasingly apathetic about it as well.

The political scientist Randall Schweller summed this up nicely when he wrote gloomily about the coming of global ennui. At the heart of this is the ‘infosphere’: an interconnected, yet heterogenous cornucopia of truths, half-truths and outright falsehoods, all circulating with great rapidity. Previously, the West has not really needed to engage much in the Cold War of words with Russia beyond official statements. One suspects, however, that the infosphere is about to get even more crowded and confusing than before.