This week in Jakarta: Censorship, polls, and rain at last 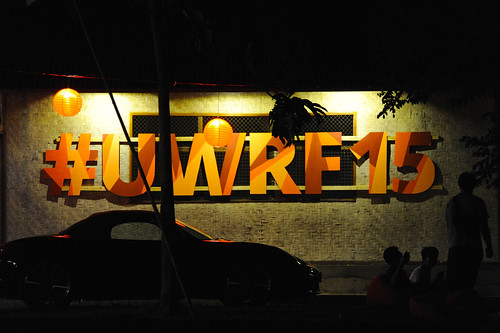 Censorship in Indonesia became a topic of public debate this week after local authorities moved to silence discussions on the 1965 anti-communist killings. Meanwhile, polls weighed in on Jokowi's first year as president, and the first rains of the season offered some relief to areas affected by haze.

Authorities in Bali declared the 1965 anti-communist killings in Indonesia off-topic for the Ubud Writers and Readers Festival, which wrapped up on Sunday. A film screening, book launch, panel discussions and other events were removed from the progra by organisers under pressure from local police, who claimed that the festival's permit did not extend to hosting political content. The festival is licensed as an arts, culture and tourism promotion event. By the same reasoning, events on a controversial land reclamation project in Bali and a coming-of-age novel set in reformasi-era Indonesia were also later scrapped from the line-up.

Organisers and presenters were surprised by the reaction from police, since political content in previous years had not raised any concerns. One of this year's cancelled events was the screening of Joshua Oppenheimer's film on 1965 survivors titled The Look of Silence, a follow-up to his film The Act of Killing, which was screened without incident at the festival in 2013. It's possible that the timing of this year's festival, coinciding with sensitivities surrounding the 50th anniversary of the killings and taking place in the weeks preceding nationwide regional elections, could have spurred pressure from local authorities to minimise political tensions.

Pressure on the festival came from local authorities, and there's no indication of a nationwide ban on speaking openly about the 1965-66 massacres, in which at least half a million civilians were killed. President Jokowi disappointed rights advocates by refusing to issue an apology to victims and survivors on last month's anniversary of the start of the killings, but his government has vowed to work towards establishing truth and reconciliation.

Nonetheless, at the local level authorities have in several cases moved to silence discussion on the tragedy. In recent weeks, a student magazine was recalled under pressure by police for investigating 1965 massacre sites in the small city of Salatiga in Central Java. In West Sumatra, a former Indonesian citizen was deported after visiting a mass grave where he believed his father, a victim of the killings, was buried. In both cases, authorities cited security and community harmony as reasons for the restrictions. The emphasis on collective harmony over individual rights is a recurring theme in decentralised local politics in Indonesia, and one that President Jokowi will have to handle during his term to resolve tensions not only around past human rights abuses, but also current-day problems of religious intolerance.

Meanwhile, as Jokowi marked his first year in office on 20 October, polls and pundits began weighing in on his performance so far as president. General opinion appeared to be that Jokowi experienced a steep learning curve in his first year, but was still capable of fulfilling campaign promises during his five-year term.

A survey launched by the Centre for Strategic and International Studies (CSIS) at the end of October found that a majority (50.6%) are generally satisfied with the government's performance. More popular aspects of performance include the introduction of strategic programs on health and education, as well as policies to combat illegal fishing by burning seized boats (83.3% approval), and to tackle drug smuggling by enforcing the death penalty (85.9% approval). Concerns were revealed on economic performance, with a rating of 69.1% dissatisfaction. Another survey released in October by Saiful Mujani Research and Consulting (SMRC) confirmed that despite doubts surrounding Jokowi's performance as president, the public remains hopeful that he can and will do better, with around 62% placing trust in his abilities as a leader.

One big challenge for Jokowi's leadership in the coming year will be preventing a repeat of this year's severe haze crisis. Rain spells this week have helped clear air pollution and dampen the fires burning in forest, peat and agricultural land in Indonesia, which have sparked emergency conditions in areas across Southeast Asia. But this year's dry season, prolonged by El Nino weather patterns, is expected to continue until early December, and will be followed soon after by the next dry season. While this year's fires may be blamed on inherited problems from previous administrations, next year will be a test for the Jokowi Administration to show its capacity to enforce the law and prevent another crisis.