This week we continued our delightful new series on foreign correspondents to mark the imminent awarding of the annual Lowy Institute Media Award. 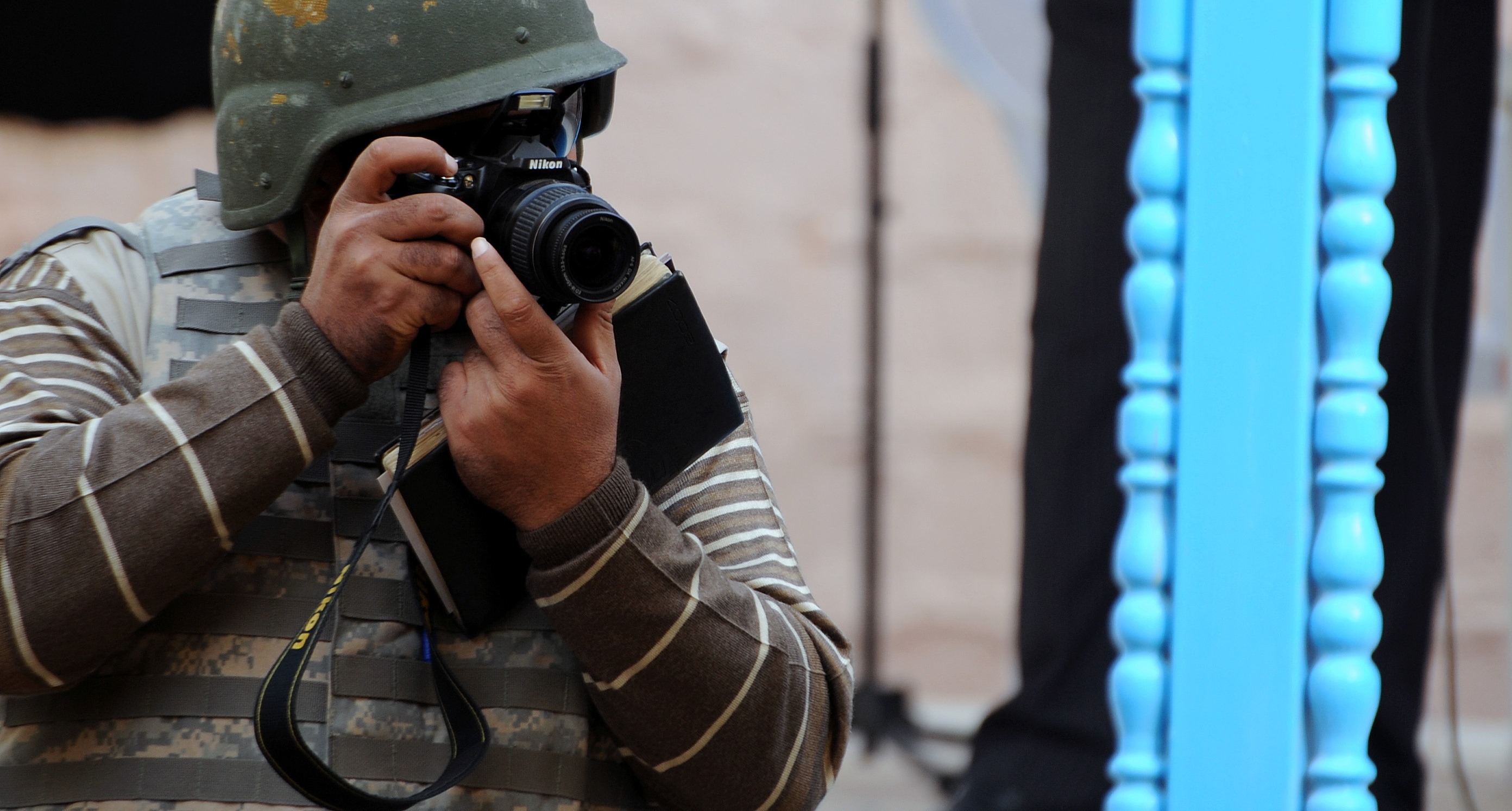 This week we continued our delightful new series on foreign correspondents to mark the imminent awarding of the annual Lowy Institute Media Award. Here's David Crowe on his time in Silicon Valley:

One day I had lunch with Google founders Sergey Brin and Larry Page in the staff cafeteria of their run-down office park, decorated with lava lamps. It was 1999 and they had 50 staff. Now they have 57,000. 'The ideal search engine should do everything, answer any question,' Page told me. I smiled at this naïve hope as we swapped opinions on the food – Page and Brin were testing a different chef every day and planned to pay with stock options when they found the right one. Maybe I should have asked for a job as a kitchenhand.

Matthew Abbott on his time in the Middle East:

Nothing prepared me for the sight of kids with phosphorus burns and bullet wounds. I was homesick but the seasoned practitioners with me lapped it up. It was then I realised covering wars was not for me. There might be the danger of death but the constant travel, loneliness and dislocation would, I sensed, wear me down. War reporters do an important job but the toll can be high – everyone I met had broken relationships and an unhealthy addiction to the adrenalin of battle. My mate from Philadelphia bought a Syrian painting but then realised, as he traveled full time, he would never really get to enjoy it.

Bruce Phillips spent part of the 1980s as an ABC correspondent in London:

Technologically we were at the cutting edge: a ticker tape machine called Bertha sent the written word to Sydney, we edited audio tapes with scissors and sticky-tape, and all our stories were poured down to Sydney each evening on a connection not much better than a phone line. You can imagine the amazement with which we witnessed the operation of our first fax machine.

Myanmar, and the plight of the Rohingya, was another prominent theme on The Interpreter this week. And no foreigner knows Myanmar better than Andrew Selth:

Given current attitudes in Myanmar, the Rohingya tragedy could drag on for years. ARSA will not achieve its aims, but Muslim anger both within Myanmar and overseas will remain. Religious divisions in the country will harden. Hundreds of thousands of refugees will be left in squalid camps in Bangladesh, unwanted by anyone and facing a bleak future. The Tatmadaw will consolidate its political gains, while Aung San Suu Kyi and her government will find it even harder to implement much-needed reforms. The democratic transition process in Myanmar, such as it was, has been set back years, possibly decades.

After a series of coordinated attacks against police on 25 August, the government's Anti-Terrorism Committee declared the Arakan Rohingya Salvation Army (ARSA) to be a terrorist organisation. While this is the first time a group has been declared a terrorist organisation under the nation's new Anti-Terrorism Law, branding an armed group as ‘terrorist’ appears to be a new trend in Myanmar. On 20 November 2016, the Northern Alliance - a coalition supported by the Kachin, Talaung, Arakan and Kokang ethnic armed groups - began planned attacks on military and police in northern Shan State. In response, on 3 December, the Defence Minister raised a call to brand the Northern Alliance as a ‘terrorist organisation’ in the lower house of national parliament. The same proposal was then raised in the Shan State Hluttaw by the military members of parliament and the Union Solidarity and Development Party (USDP) where it succeeded, 61 votes to 45.

'The Lady”'so embodied her nation’s interests in the minds of Western policy-makers that her personal approval was seen as necessary for ending Myanmar’s isolation and lifting the final Western sanctions against the country. Inevitably, the Suu Kyi backlash has given rise to calls that she be stripped of her Nobel Prize and other baubles of international recognition. This is a bad idea. In the first instance, it would be to invest more importance than is warranted in this often dubious and meretricious accolade. In the second, it would do nothing constructive to stop the blood-letting in Rakhine State, and would only deflect attention away from the truly guilty party: Myanmar’s military.

Another prominent theme on The Interpreter this week was India. We had Chietigj Bajpaee on Sino-Indian relations and Michael Kugelman on Narendra Modi's Make in India campaign. And Shashank Joshi wrote on the booming ties between India and Japan:

This extraordinary improvement in relations, sustained across three Indian premierships and ten Japanese, has been driven, above all, by what both sides view as China’s aggressive, 'expansionist' behaviour in Asia over the past decade.

Little Bhutan has been caught in the middle of Sino-Indian tensions of late, but needs to speak up, wrote Olivia Shen:

Bhutan has an opportunity to speak up for its own interests and assert that its sovereignty is no more negotiable than China’s or India’s. This could help put Bhutan on a firmer footing for boundary talks with China (held annually since 1984) and at the same time assuage India’s fears that it will trade off Doklam (as China had proposed during the 1996 talks). In short, Bhutan could adopt more of the hedging behaviour used by other small countries who find themselves in the middle of great-power competition.

As always, The Interpreter maintained an economic focus too, with Stephen Grenville writing on US quantitative easing, Alan Oxley completing his three-part series on the future of world trade, and Richard Moore writing on the uncertain future of the Asian Development Bank.

Olivia Shen argues that the crisis in Marawi forces Australia to think long-term about security in Mindanao:

Prime Minister Malcolm Turnbull and Foreign Minister Julie Bishop have both declared that Marawi is 'in our region' and Australia has a vital vested interest in denying ISIS a foothold in Southeast Asia. But the strategic importance of Marawi is not just about the direct threat of terrorism. More broadly, Marawi is a tactical opportunity to deepen key regional relationships and meet global alliance commitments. Often for Australia these two imperatives conflict, but in Marawi they converge.

The BBC's Nick Bryant said digital diplomacy had been oversold:

Perhaps we all underestimated the extent to which international leaders would use Twitter diplomacy not to promote international relations but rather to shore up domestic support. Whether it's threatening to pull out of NAFTA or chiding China on trade, Donald Trump's foreign policy tweets seem directed more at his electoral base rather than foreign ministries. Social media is a more effective tool of politics than diplomacy, which, again, has had a deleterious effect. What many e-diplomacy advocates thought would become platforms promoting openness and goodwill have in fact become forums to air grievances, settle scores and stoke nationalistic impulses.

The way in which Xi deals with the age question in the make-up of the PSC will be a good indicator of the nature of his power and the extent of his success. It will indicate if and when Xi is willing to compromise, his future policy priorities and perhaps even his political insecurities.

Two months after its election, Timor Leste finally formed a government this week. This is good news, says Michael Leach:

The 2017 election cycle represents a turning point for Timor-Leste in several respects. Though technically the seventh government since 2002, and the fourth parliament, it is only the second change in government leadership, with the other being the 2007 shift from Fretilin majority government to a CNRT-led coalition. It therefore represents the ‘double turnover’ moment since independence, in which the fundamental composition of the government changes for the second time. This is considered a key measure of democratic consolidation.