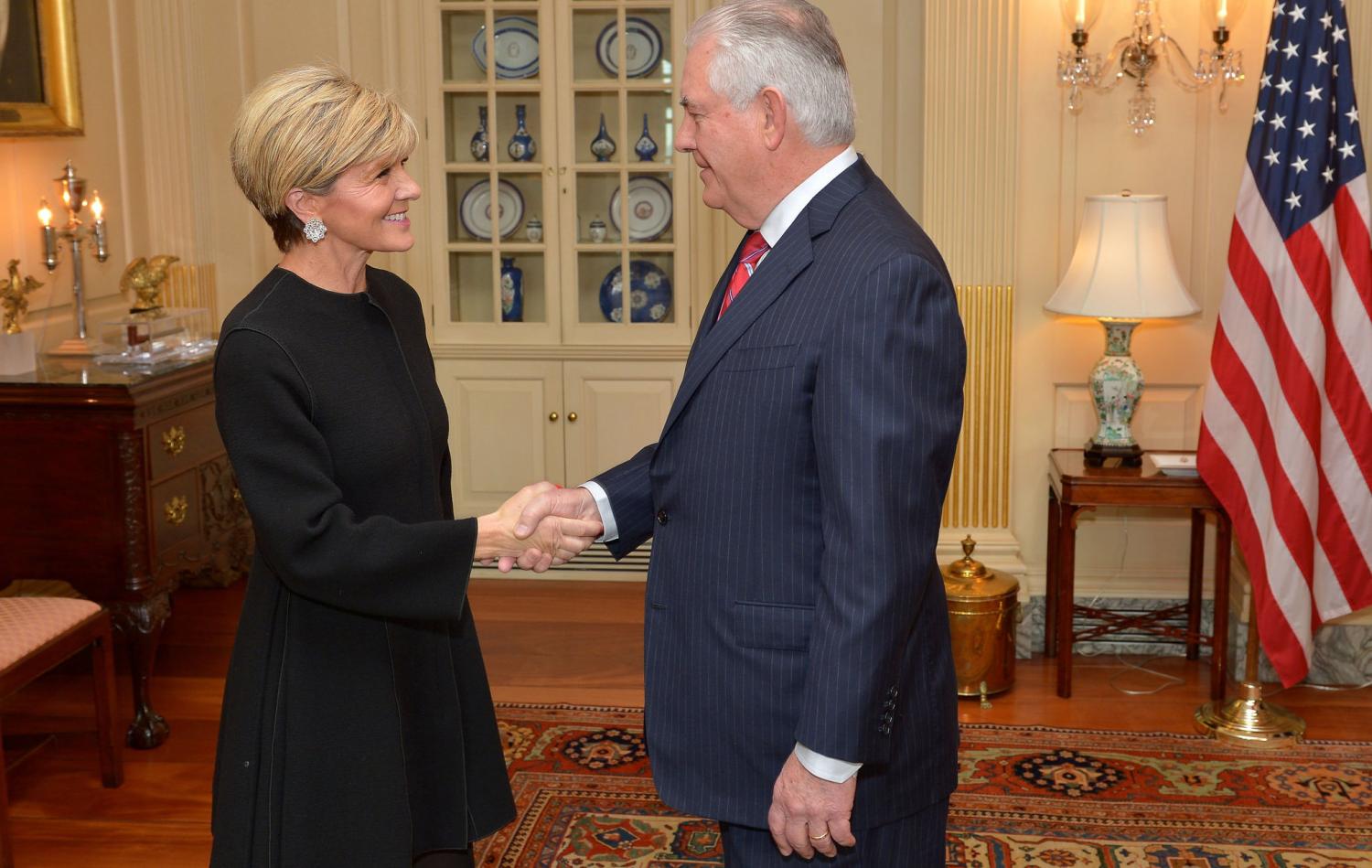 This week Foreign Minister Julie Bishop flew to Washington, DC to meet with her US counterpart Rex Tillerson after what could generously be called a tumultuous month of US-Australia relations. Her main mission in America, according to Nick Bisley, is to find out who's actually calling the shots:

The question for Bishop, which only first-hand experience can help answer, is whether the ‘grown-ups’ will be in charge or whether the wild-eyed revolutionaries will remain at the centre of power. A great deal depends on this for Australia and indeed the world.

Back in Australia, Sir Angus Houston and Rory Medcalf discussed the future of the US alliance at the National Press Club in Canberra. First, Houston:

Australia should endeavour to continue to quietly engage and influence the Trump administration as to the success of US strategy in the Indo-Pacific and the importance of the ANZUS alliance to Australia’s security.

Finding a way to manage the tension between the interests of our major strategic partner - the US - and our primary economic partner - China - surely has to be at the very heart of Australian foreign policy over the coming decade, yet our political leaders seem far from ready to even acknowlege the tension.

Hugh White concurred, and formulated his own response to the dilemma:

Sam Roggeveen is right. The new DFAT White Paper cannot ignore the big questions about America, China and the strategic future of Asia, because those big questions will do more than anything to frame Australia’s international situation over the decades ahead. But what can the White Paper say? There are no well-honed talking points on all this, because for a decade now our political leaders – with one notable and lamented exception - have been in denial, unwilling even to acknowledge the problem, let alone discuss how we should respond to it.

Earlier this month Australia's Ambassador to the US Joe Hockey delivered a speech in Chicago on the value of mateship in the US-Australia alliance; another 'apparent triumph of stale thinking', wrote James Curran:

In this new context, Australia and Japan would do well to hedge with a Plan B, argued Michael Heazle and Andrew O'Neil:

A major White Paper takeout from the Dialogue is that increased security cooperation between US allies with support from US security partners in the region (e.g., Vietnam, Singapore, Indonesia and India) could be very effective not only in satisfying demands from Trump and future administrations for a bigger contribution from allies (and therefore encouraging ongoing US support), but also as a hedge against a possible drawdown of US strategic engagement in Asia.

So how is the US President coping with resistance to his agenda from US institutions? Aaron Connelly:

The story of 2017, and perhaps of the next four years, will be of a struggle between the American institutions acting in defence of fundamental liberal values, and a President hostile to them. The field of foreign policy will be shaped by these standoffs as well. The leadership and the vast majority of the United States’ foreign policy institutions — the military, the intelligence community, the Foreign Service, and the civil service — have it in their DNA to support allies, democracy, and a rules-based international order.

Israeli Prime Minister Benjamin Netanyahu was in Australia this week - for the past decade the bilateral relationship has idled in neutral, argued William Stoltz:

Israel has assumed Australia’s ongoing support based on our historical kinship and Australia’s strategic dependence on Israel’s great patron, the United States. As a result, Australia has been taken for granted and Israel’s envoys have done little to consolidate the friendship.

Also visiting Australia will be Indonesian President Joko Widodo, due this weekend. Aaron Connelly on prospects for the relationship:

Given the unprecedented goodwill between the Australia and Indonesia, and the likelihood that another crisis will emerge in time, it is worth asking what more can be done to take advantage of this moment. Though there are a variety of opportunities for further cooperation in specific fields, two broad areas dominate the bulk of the discussion: trade and investment, and the strategic situation in the region.

Last week saw dozens of local elections held across the Indonesian archipelago. The most-watched race was for the governership of Jakarta - a run-off vote is due to be held this April. Max Walden on the election's positive signs for pluralism:

April's runoff election in Jakarta and the 2019 presidential elections will likely prove even greater tests of Indonesia's 19-year-old democracy. Yet, in demonstrating the nation's institutional ability to conduct 101 simultaneous polls across a vast and diverse country, these elections should ultimately be cause for celebration.

In Papua New Guinea, Catherine Wilson examined the hot topics for prospective voters ahead of this year's elections:

Five years ago, intense candidate rivalry, carnival showmanship and controversy about electoral roll discrepancies were the hallmarks of a drawn-out contest between veteran post-Independence leader Michael Somare and the People’s National Congress leader Peter O’Neill, who was eventually declared the winner.

Kadira Pethiyagoda on how Sri Lanka is handling the transition to Asian multipolarity:

Last weekend authorities in Xinjiang, China, held an antiterror rally in response to an uptick in ethnic tensions and local violence. Michael Clarke on the failings of this strategy:

Deputy Xinjiang CCP Secretary Zhu Halian's remark that measures such as last weekend's rallies have forced Uyghur terrorists 'to end of the road, like a cornered beast driven to desperate action' are tragically ironic.

There’s no doubt that contemporary civil society is in some strife, and Facebook could potentially play a role in rectifying the situation. But as I’ve argued before, there’s no reason to have faith it will all work out and leave Facebook to its mission. Facebook is transforming into a global, monopolistic utility. It’s time for the world to treat it like one.

Two recent cases show how rising intolerance and intimidation has a legal cost for minorities in the archipelago nation.
Natasha Jha Bhaskar 31 Jul 2019 10:00

The WTO fight over India’s sugar subsidies is a chance for New Delhi to encourage farmers into more profitable crops.
Sam Roggeveen 21 Feb 2017 09:10

Managing the tension between the interests of our major strategic partner - the US - and our primary economic partner - China - has to be at the very heart of Australian foreign policy.