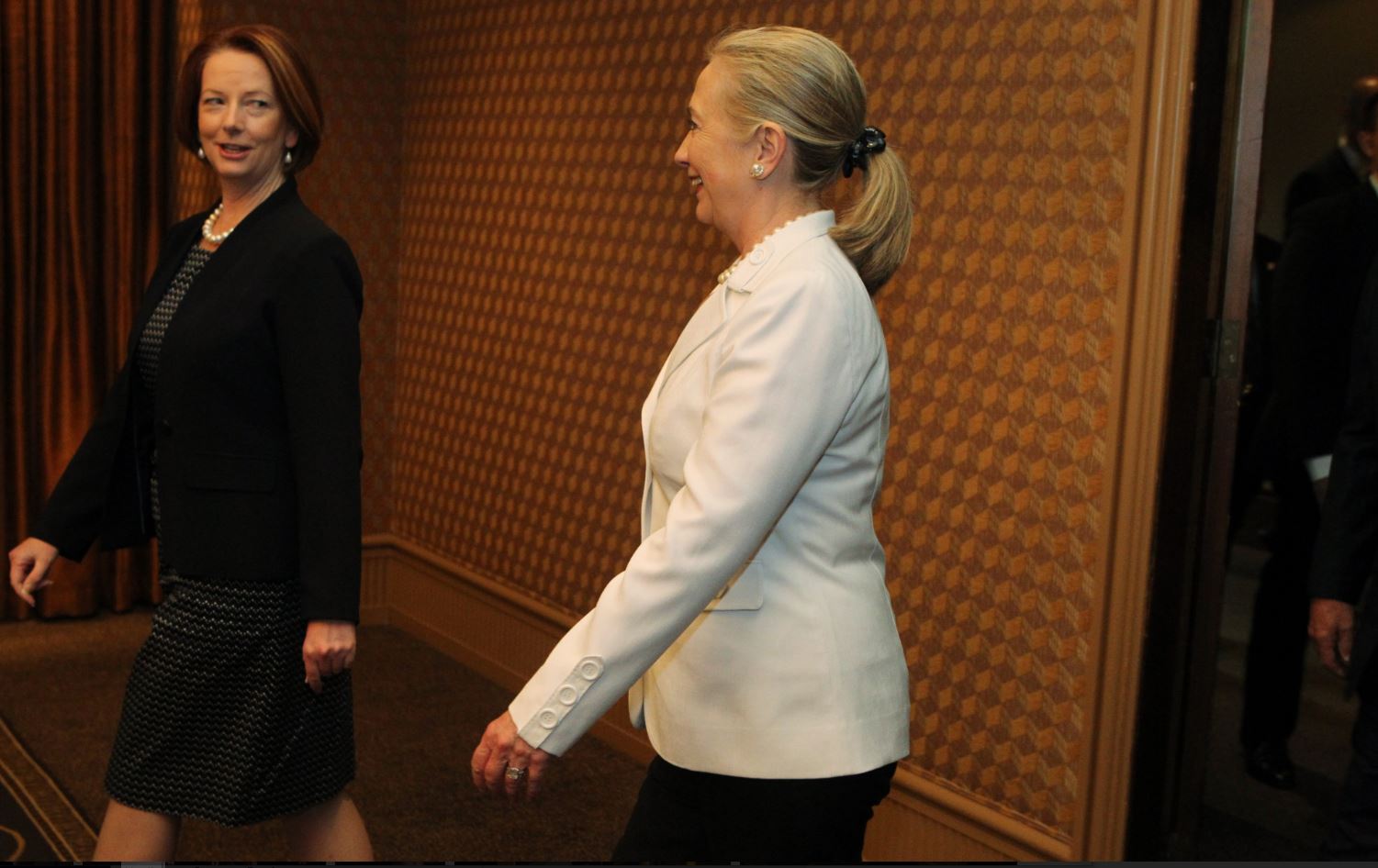 As you've probably noticed, this week the Lowy Institute launched its new website as well as a new-look Interpreter. The change reflects both the Institute's aim to be a world-leading digital think tank and The Interpreter's progression from blog to magazine. The new website structure will enable us to more effectiely embed interactives and other multimedia into our research, and presents this research in a far more readable way.

But foreign affairs stops for no-one, and throughout the website transition the Interpreter's coverage continued more or less unabated.

If/when Hillary Clinton ascends to the US presidency, could there be room in her circles for Julia Gillard? Geoff Kitney:

It got off to a rocky start, but the relationship between Hillary Clinton and former Australian Prime Minister Julia Gillard has become a warm and respectful one that is likely to grow in importance if Clinton becomes President of the United States. A Clinton victory may see Gillard take on new responsibilities in plans by the new US president to use her presidency to help improve the lives of women and girls, especially in the developing world. But beyond what formal work she may do for these Clinton causes, Gillard could also become an informal confidante to the new US President on wider issues, including the challenges in the Asia Pacific region that will face the new administration.

Meanwhile, Emma Connors took a look at down-ticket troubles for the Republicans in Nevada:

Nevada is one of the battleground states where polling suggests Hillary Clinton has consolidated her position in the presidential race, and is now ahead of Trump by 4.7 points, according to RealClearPolitics. Republicans are starting to panic, not just about a Trump defeat, which many (except the candidate) now concede is the most likely outcome, but also about the down-ballot contests which could cost the GOP control of the Senate, and, most fundamentally, the future of their party.

This week Australia's Deputy Prime Minister Barnaby Joyce told an audience featuring China's ambassador that some Opposition policies amounted to communism and (in reference to foreign investment) that the Australian people wouldn't 'die for a rented country'. James Laurenceson:

Joyce is right about one thing: communism usually means a dud deal for Australian farmers, and the community. Chinese capitalists understand that too.

Joyce wasn't the only one criticising Labor policy; Crispin Rovere argued that the Opposition should adopt a more distinctive approach national security:

Now that the election is over, it's incumbent on the Opposition to stop being craven and challenge the government on national security with reasoned argument and a clear grand strategy. The Australian people are not foolish. Greater electoral credibility will be afforded to the those who prove most credible, not whomever is fastest at hoisting a flag.

Some observers of Thailand’s politics are attracted to the theory that the Crown Prince may have been 'blocked' from assuming the throne by his enemies in the Thai royalist establishment. Such a view is particularly influential among some sections of the Red Shirts movement, who believe that succession instability may provide an opportunity for an uprising against the royalist establishment that have repeatedly destabilised and overthrown pro-Thaksin governments (former PM Thaksin Shinawatra was overthrown by a military coup in 2006) in  the last decade. The international media focus on the Crown Prince’s unorthodox and colourful private life tends to convey the impression that he may not be 'up to the job' – or even interested in it. But based on what we actually know at this time, such speculation is almost certainly wrong, for the following reasons...

Daniel Woker argued that Trumpism has made an impact on Europe's far right:

Much as a landslide for Hillary Clinton on 8 November would be the best put down of Donald Trump, the first line of defence in Europe would be elections that end in comprehensive defeat of his fellow populists. But such defeats are far from assured.

The French-speaking Wallonia region of Belgium objects, leaving the EU 'not capable' of signing an agreement. If Europe can't agree a trade deal with Canada, what hope is there for the Trans-Atlantic Trade and Investment Partnership (TTPI), Australia's negotiations with Europe or, for that matter, of a 'soft' Brexit which would leave the UK economy still closely integrated with Europe?

What can the US do to prevent civilian deaths in Yemen? Rodger Shanahan:

The focus on civilian deaths in Yemen resulting from the actions of a close American ally is also challenging for those in Washington trying to advocate for military intervention in Syria to stop civilians being killed in Aleppo. If the justification for establishing a no-fly zone or safe zones in Syria under US protection is to stop Washington’s enemies from targeting Syrian civilians, isn’t then there an equally compelling case for establishing the same to protect Yemeni civilians from the incompetent actions of Washington’s allies?

How afraid should Hollywood be of China's Wang Jianlin? Not very, wrote Marie-Alice McLean-Dreyfus:

Indonesa's two new power industry ministers face a hefty set of challenges and a limited amount of time in which to tackle them, argued Ian Satchwell:

Despite the challenges, the experience of Jonan in reforming organisations and in private sector investment, plus Vice Minister Arcandra’s oil and gas knowledge, may help them to advocate and adopt packages of policies and legislation that deliver energy and minerals development objectives and contribute substantially to Indonesia’s economic goals. The ministers don’t have much time, however. While there is almost three years left of the first Jokowi Presidency, reforms are unlikely to be passed by parliament or implemented in the 10 months leading up to the 2019 elections, meaning that Jonan and Arcandra have just two years to use their skills to turn the energy and minerals sector around.

While it’s unlikely Duterte, who is unabashedly uninterested in what the international community has to say about his leadership, will cower to the Hague, this feud is an important one. Polling and coverage both show overwhelming support for Duterte’s stance on crime but there is sizable dissent among human rights activists. The attacks on de Lima, both directly through Duterte and other government officials and indirectly through their supporters, demonstrate the frightening lengths the president will go to in order to stifle opposition and settle old scores. Earlier this month, Duterte said he was 'tempted' to declare martial law, echoing an earlier threat. These are ominous signs so early on in his six-year term.