The dream projects of Japan’s longest serving PM appear under threat as his political capital evaporates. 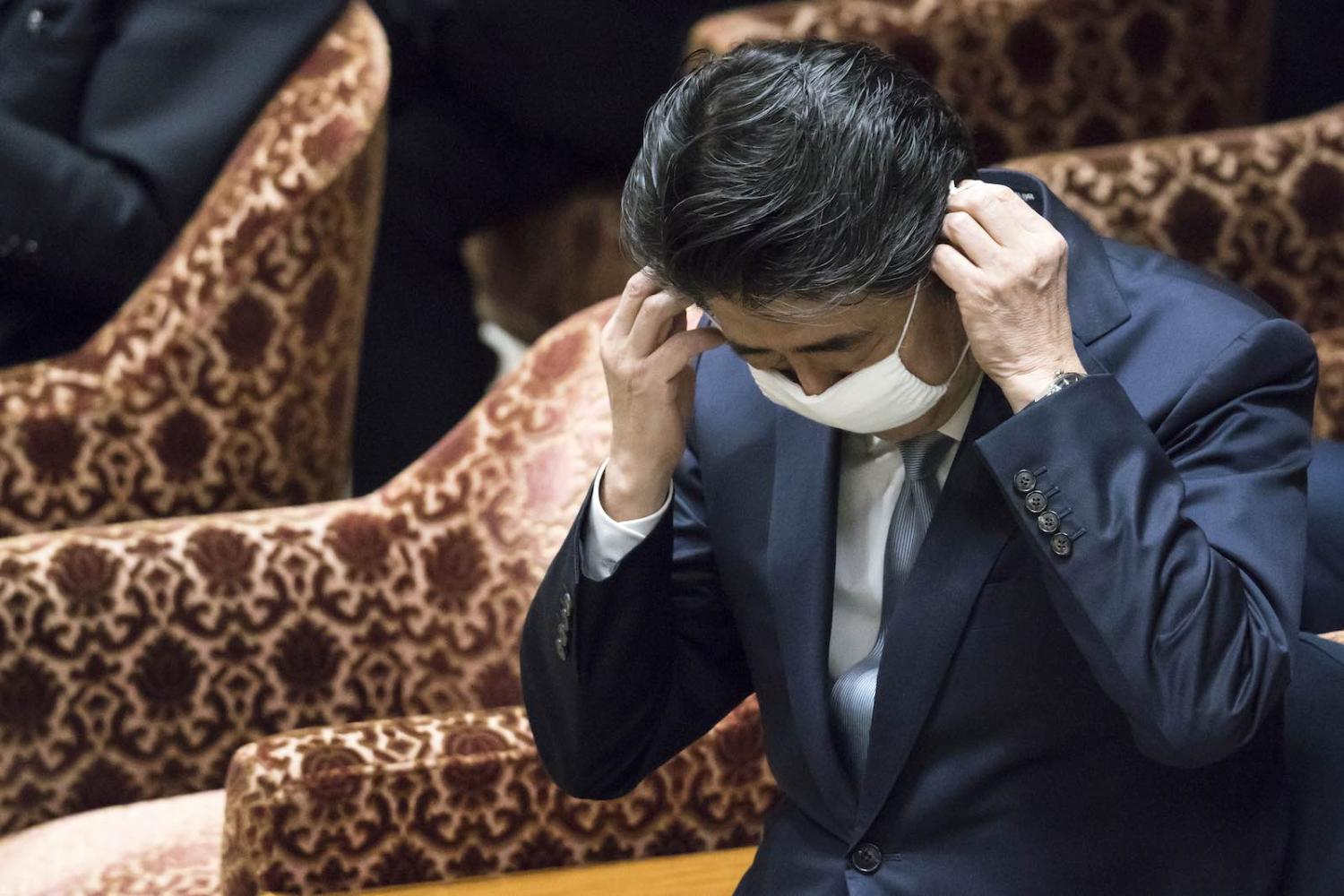 Japan’s longest-serving Prime Minister Abe Shinzo is facing tough political challenges while dealing with Covid-19, which he has called “the biggest crisis” since the Second World War. The Abe government’s response to the crisis has been slow and dissatisfying to many Japanese voters, leading to a decline in Abe’s popularity and the emergence of cracks within the ruling coalition. Though weakened, Abe looks secure in his position for now, thanks to a divided and weak opposition, and the lack of a serious contender within his Liberal Democratic Party to challenge him as he struggles to arrest rising cases of coronavirus in Japan.

Japan faced the crisis first in February when the Diamond Princess cruise ship docked at Yokohama port. Coronavirus infections on board resulted in a dozen deaths. The government did not seem to grasp the seriousness of the virus. Instead of a political response based on medical advice, it was left to the bureaucrats of the Ministry of Health to handle what became a stand-off over the sick passengers on the cruise ship.

While the cruise ship crisis was unfolding, Abe paid little attention to its deadly consequences, perhaps over-confident that disease would not spread in Japan. A panel of experts was not established until before mid-February. Abe preferred to make announcements based on his own political judgement. His abrupt announcement to close all schools for several weeks despite the expert view that such a move had little value was one such example.

Covid-19 has once again shown a lack of strong leadership in Japan in crisis management, as was the case with the 1995 Kobe earthquake and the 2011 triple disaster.

At that stage, Abe was focused on preparing for the visit of China’s President Xi Jinping in April to showcase his diplomatic acumen in improving Japan’s troubled relations with China. This made Abe hesitant to impose international travel restrictions, especially to and from China, where the virus had originated. It was not until Xi’s trip was postponed that Japan imposed travel restrictions on international arrivals, including from those of China.

Abe’s hesitation to impose strict restrictions, not only on international travel but also for social distancing, particularly for commuting in packed local trains, arose from his conviction that the Olympics would go ahead as scheduled. Only after some key countries including Australia said they would not send teams was Abe forced to announce that the Olympics would be postponed until July 2021.

Reluctantly Abe declared a state of emergency in early April covering only seven of 47 prefectures. But as virus cases continued to be reported across Japan, he extended it nationwide in mid-April which many Japanese felt came too late. The state of emergency does not give Abe the power to impose national lockdowns, ban gatherings, or close night clubs, but only allows him to issue guidelines for people to voluntarily follow to limit social contact and work from home where possible.

As of this week, Japan has reported 14000 cases of Covid-19, with 400 deaths and about 3000 recovered. Although these figures compare favourably with many countries in Europe, as well as the US, quicker, decisive action and more stringent rules based on advice from medical experts could have seen much lower numbers in Japan.

Covid-19 has once again shown a lack of strong leadership in Japan in crisis management, as was the case with the 1995 Kobe earthquake and the 2011 triple disaster of tsunami, earthquake and nuclear meltdown. This means Japan’s domestic politics has also become challenging.

Under the Abe administration decision-making has been centralised in the Prime Minister Office, or the Kantei, with some key advisors and party officials such as chief cabinet secretary Yoshihide Suga calling the shots. This style might have worked effectively in foreign policy and to some extent in economic revitalization, yet it seems to be largely ineffective in the current public health crisis. People are privately suggesting that even Suga, long considered possible prime ministerial material, has lost his shine in this crisis.

Furthermore, it seems political decisions are not made in consultation with the junior partner in the ruling coalition. Komeito’s chief Natsuo Yamaguchi was not happy with Abe’s stimulus package of almost US$1 trillion, especially the provision to handout 300,000 yen (A$4030) to families in economic distress. He insisted that each individual be paid 100,000 yen. Abe had little choice but to accept the Komeito proposal in order to maintain his coalition government.

Although Japan operates under a unitary system, local leaders in the past have demonstrated leadership by introducing innovative policies ahead of the national government. In the case of the coronavirus crisis, too, some local leaders have acted fast with effective policy response. Tokyo’s Governor Koike Yuriko, for example, has introduced stringent policies with good care arrangements for the infected ahead of the national government. She has also communicated more clearly and firmly with Tokyo residents on the need for social distancing and for businesses to close than has the Abe government. Abe announced the nationwide emergency only after the insistence of many prefectural governors.

Abe’s political capital seems to be depleting fast and most of his dream projects –constitutional revision, settling territorial disputes with Russia, and hosting the 2020 Olympics ­– remain unrealised. Even his renowned “Abenomics” program designed to stimulate Japan’s sagging economy is now under stress. Abe’s current and extended third consecutive term runs out in September 2021 and it remains unclear what will be his legacy as the longest serving prime minister of Japan.

The legacy of a complex nuclear history weighs heavily on a country torn between deterrence and disarmament.
Elaine Pearson 31 Aug 2018 06:00

On his trip to Jakarta, Scott Morrison should raise the disturbing trend to repress religious minorities in Indonesia.
Melissa Crouch 9 May 2019 06:00