Indonesia’s police, military and prisons were altered by the 2002 attack. Democratic backsliding may signal an undoing. 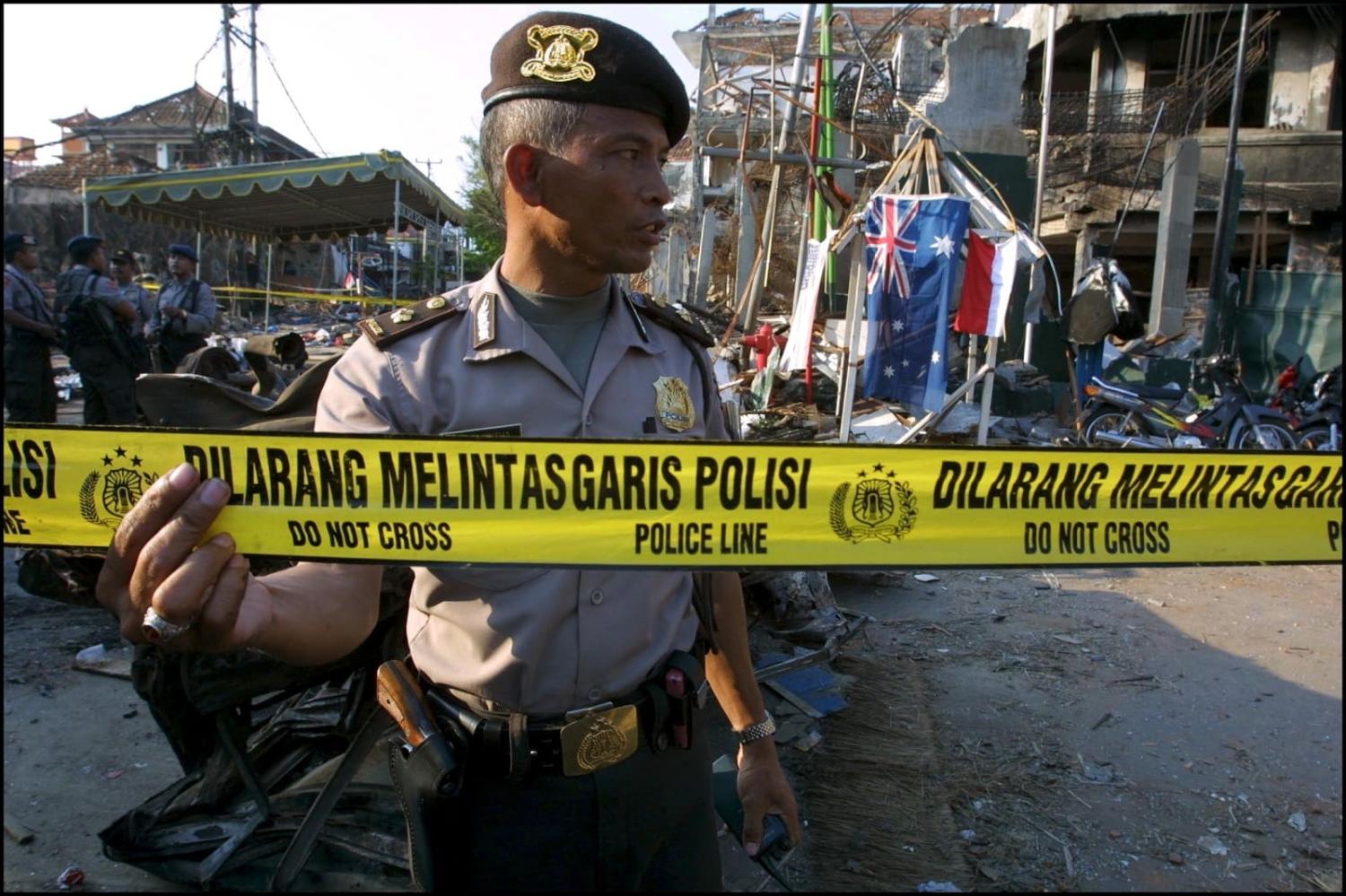 The Sari Club In Kuta, Bali, was destroyed by a car bomb attack in which 202 people died on 12 October 2002 (Patrick Aventurier/Gamma-Rapho via Getty Images)
Published 6 Jan 2023     Follow @sidneyIPAC

Over summer in Australia we’re featuring selected articles from the past year. This was originally published 14 September 2022.

The horrified reaction of many Australians to the planned early release of Bali bomber Umar Patek demonstrates the lasting traumatic impact of the 12 October 2002 bombing, but the political impact in Indonesia has been lasting as well. The bombing served to strengthen the power and capacity of the police at a critical time, underscore Indonesia’s then strong commitment to democratic norms, and add an important new dimension to the Australia–Indonesia relationship.

When the bombing happened, the police had been separated from the military for only three years and had taken over the latter’s internal security function, not without resistance. The army saw itself as more experienced, better trained and better prepared to handle terrorism, often pointing to its role in a 1981 hijacking in which commandos from the army special forces (Kopassus) stormed the plane and rescued all the passengers. But the army was still stigmatised for its role in suppressing dissent during the Soeharto years, and in 2002 there was little likelihood that it would be allowed to take the lead in anti-terrorism, let alone in a role that carried with it the possibility of additional repressive powers.

Strengthening the police vis-à-vis the military was a critical step in Indonesia’s democratic consolidation.

Instead, Indonesian police worked closely with Australian Federal Police (AFP) counterparts in the Bali investigation, received assistance from the United States to set up Detachment 88, a counter-terrorism force, and subsequently received the funding, training and technology that allowed it to expand and professionalise. Strengthening the police vis-à-vis the military was a critical step in Indonesia’s democratic consolidation, even if the old police problems of corruption, abuse and lack of accountability continued.

Indonesia’s desire to move beyond its authoritarian past also influenced another key decision made in direct response to the Bali bombings – to reject draconian measures in its emergency anti-terrorism law that would be reminiscent of the Soeharto-era anti-subversion law. Neither lawmakers nor the public were in favour of a return to preventive detention – a 2003 proposal for a Singapore-style Internal Security Act was quickly quashed. Instead, officials ensured that all suspects were quickly brought to court in open trials with full access for the media. The result was that much of the Indonesian public began to be convinced that Bali really had been the work of homegrown terrorists and was not a CIA-Mossad conspiracy.

The huge interest – domestic and international – in the trials also helped draw attention to the woeful state of Indonesian prisons, beginning a glacial process of reform but one with a clear impact. Donors, including Australia, were also key here. Prison administration and data-keeping improved. Controls over visitors and communications grew tighter, if slowly. Police and prison authorities paid more attention to the risk of radicalisation of ordinary criminal offenders by committed ideologues with access to outside funding. New super-max facilities were constructed, with single cells for the hardcore unrepentant instead of the multi-person cells of traditional prisons.

The Bali bombing also served to provide a new common bond in the always fraught Australian–Indonesian relationship. The Indonesian police needed help in the initial investigation, and the AFP provided it through on-the-job training. A year later, after the 2003 Marriott hotel bombing in Jakarta, Indonesian police made clear they did not need the same kind of guidance, but the relationship remained strong, exemplified by the joint Australian–Indonesian leadership of the flagship anti-terrorism training institute, the Jakarta Center for Law Enforcement Cooperation (JCLEC), which opened in 2004.

The battle against terrorism was treated as a law enforcement issue, not a war, and the military was kept on the sidelines.

All of these were positive developments, but it is important to keep the timing in mind. The Bali attack took place when the restoration of democracy after more than three decades of strongman rule was still fresh. It meant that many Indonesians resisted draconian measures in response. There was no state of emergency, no indiscriminate round-up of suspects, no widespread arbitrary detention. The battle against terrorism was treated as a law enforcement issue, not a war, and the military was kept on the sidelines. If an attack of similar magnitude happened today, amid steady democratic backsliding, Indonesian officials would likely show far less concern about protecting civil liberties or keeping the military in check. (Indeed, the military has proved adept at improving its tarnished image and regularly appears in public opinion polls as one of the most trusted institutions in the country.) A strengthened anti-terrorism law, adopted after the 2018 Surabaya bombings, already allows for preventive detention. The number of suspects arrested annually has increased dramatically as a result, though trials are still open and relatively speedy, and most of those arrested as part of “preventive strikes" receive relatively lenient sentences. This is in part because the police from the beginning have tended to see Islamist terrorists more as devout Muslims gone astray than as evil incarnate.

This brings us back to the release of Umar Patek. While Australian anger is understandable, neither Indonesia nor Australia is in danger from this man who has repeatedly expressed sorrow for his actions, helped the police with information on the Abu Sayyaf Group after his long association with them in Mindanao, and counselled other prisoners. The far bigger danger comes from Indonesia’s democratic regression, which could eventually undo some of the useful reforms that came out of the Bali tragedy.

Populism, globalisation and the failure of elites

The challenge is not to patch the old model of globalisation with bits of string and gum. It is to construct a new model.
Dave Sharma 25 Oct 2022 14:00

Far from advancing the cause of peace, the government risks separating Australia’s position from its closest friends.
John Edwards 4 Sep 2017 13:52