If the economy is already back to full capacity, what hope is there for the many Trump voters who find themselves without satisfying jobs?

After the painfully slow recovery from the 2008 great Recession, US unemployment is now 4.4%, well below the level commonly regarded as 'full employment'. This would suggest that the economy has reached capacity, with some arguing that the current lacklustre rate of growth is in fact faster than the long-term sustainable rate.

This raises important policy issues. On the immediate policy agenda, should monetary policy be moved more decisively away from the very accommodative stance of the past decade, even though inflation is still below the Federal Reserve's target? In the medium term, if full capacity has been reached after such a limp recovery, what does this say about the economy's underlying trend rate of sustainable growth? What does this mean for President Donald Trump's confident hope for 4% growth in the longer term, and his budget assumption of 3% growth? If the economy is already back to full capacity, what hope is there for the many Trump voters who find themselves without satisfying jobs? The interpretation of 'full employment' is central to these issues.

Of course, this 4.4% unemployment rate is not the only measure of the state of the labour market. Many commentators also look at the 'U6' measure, which includes part-time workers who would like to work more hours and some discouraged workers who are not actively seeking work. This measure is double the headline rate and not quite back to its pre-2008 level. The moderate rise in wages (around 2.5% over the past year) is perhaps a sign that the labour market is close to capacity.

Others focus on the fall in participation – the proportion of the population that is either employed or actively looking for a job. This suggests that there might be more slack in the labour market. The overall figure is now 4.5 percentage points below its peak in 2000, falling sharply during the recession and rebounding only slightly more recently. This overall ratio is affected by a variety of factors, such as demography and the aging of the population.

For a sharper focus, it is more useful to look at participation by prime-age workers (15-64 year-olds), and to disaggregate into men and women. Prime-age male participation has fallen consistently since World War II – in the immediate post-war period, almost all US men were counted as participants in the labour force, either working or seeking work. By 2000 this prime-age participation rate had fallen to 83.9% and was 81.7% at the start of the recession in 2007. By 2015 it was 78.5%: one in five of this prime-age group had dropped out, neither employed nor looking for a job. 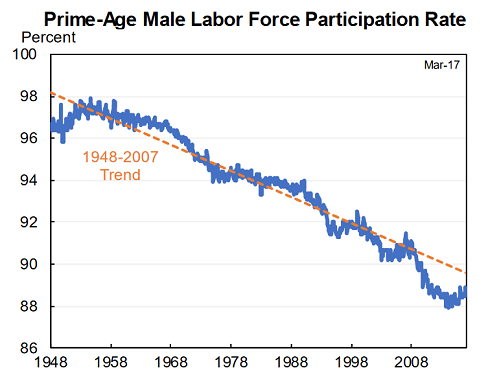 Some of the sharp fall since 2007 reflected the drawn-out recovery – with jobs hard to find, some unemployed stopped looking actively for work. Spending too long in this category means that they won't join the labour force again – they lose skills, motivation and contact with the workplace. This 'hysteresis' effect would explain part of the current low participation.

But the longer-term trend demands a fuller explanation. While it is not unique, most other countries show increased participation or, at most, small falls. Distinguishing between men and women just deepens the US paradox. For most of the post-war period, female participation increased just about everywhere, including in the US. But since 1990 US female participation has fallen, while it has continued to rise elsewhere.

The impact of lower participation is big. If the US now had the same participation as it had in 2000 (which would, coincidentally, make it the same as Australia's current participation) combined with its current level of unemployment, GDP would be around 10% higher, using a traditional rule of thumb linking employment and GDP. Think how many of America's problems could be addressed with production one-tenth higher! Think also of the societal advantages of taking seven million people out of the unhappy state of idleness (where surveys show they spend increased time watching day-time television and playing computer games). The shocking mortality increase of US white men (while just about everyone else in the world is living longer) can't be just a result of joblessness, but there clearly is a major link.

Thus participation may be a dry statistic, but behind the US trend lies an alarming story that cries out for remedial action. It would be wrong to think that these damaging trends are immutable – Japan has dramatically increased female participation, so that it is now higher than in America.

It goes without saying that this has been the focus of serious analysis, and the diagnosis and prescription vary. Cutting through these differences, the following seem to be important factors:

There is clearly great potential here to address the blue-collar discontent that swept Trump to victory and to get many more back to work, with all the societal benefits involved. But there are no quick fixes here. More to the point, Trump's mindset is fundamentally antithetical to the policy options this parlous situation demands. 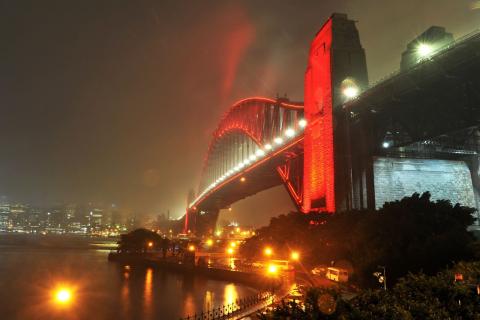 The tide is turning against US financial regulation

Despite the hype, there are serious questions whether the benefits of the TPP really outweigh its costs.
Alexandre Dayant 28 Nov 2017 16:30

Aid and development links: Britain, NGOs and the search for evidence

Aid and development links from The Interpreter team.