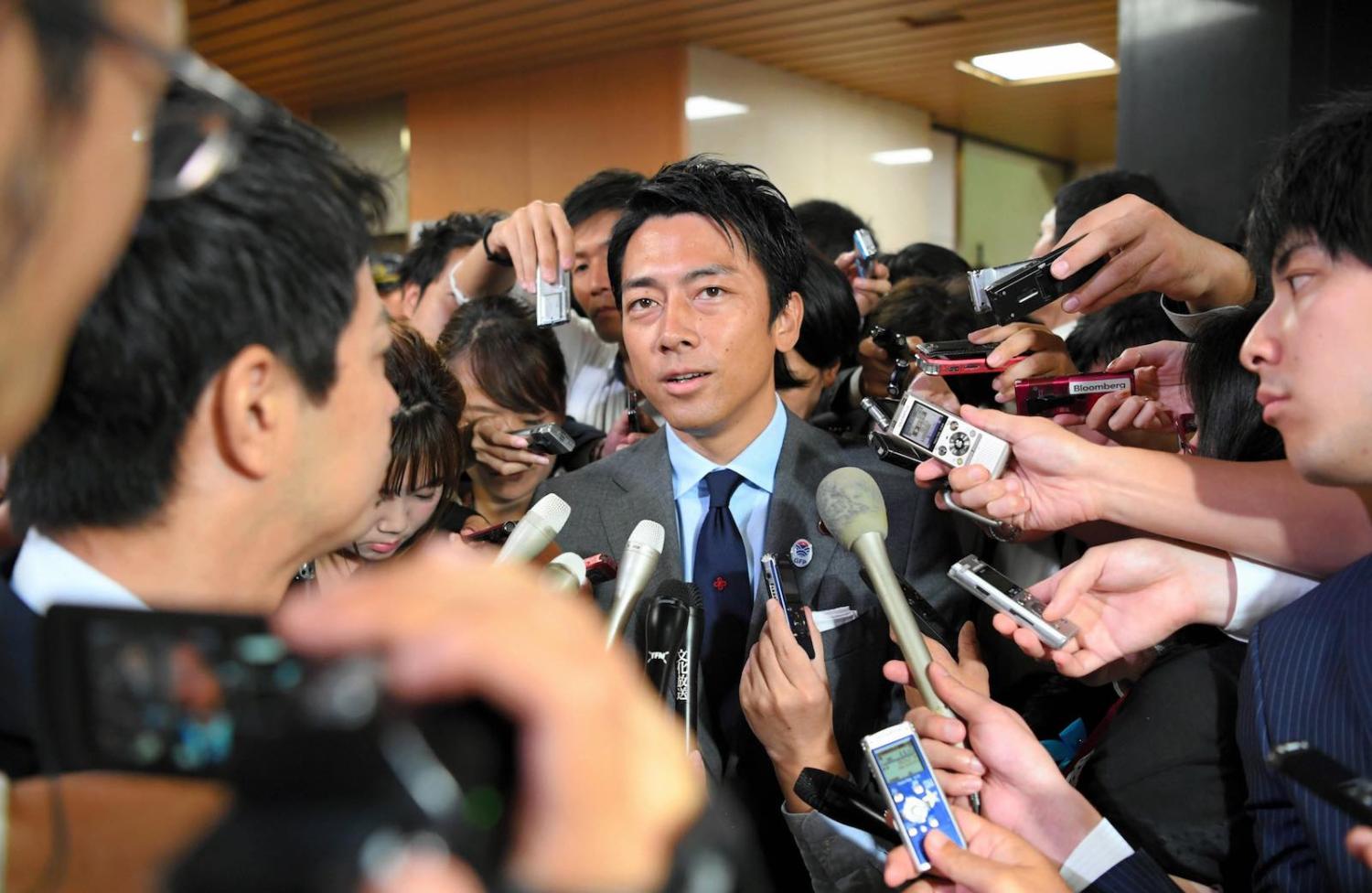 Politics is in the family - Shinjiro Koizumi (Photo: The Asahi Shimbun via Getty Images)
Published 18 Sep 2019

Last week, Japan’s Prime Minister Shinzo Abe reshuffled his cabinet after his Liberal Democratic Party’s healthy electoral success in the July upper house election. Abe said he wanted to ensure “stability” as well as tackle “challenges”, and to that end he retained some key allies and political heavyweights, while appointing 13 new ministers in a cabinet of 19.

Deputy Prime Minister and Finance Minister Taro Aso and Chief Cabinet Secretary Yoshihide Suga, two of Abe’s most trusted and long-time lieutenants, continue in their posts. Toshimitsu Motegi has been appointed foreign minister after Taro Kono was moved from foreign affairs to defence.

Both Motegi and Kono are touted as future contestants for the prime ministership. Motegi has served in different ministerial portfolios over the years and was rewarded this prized post for his negotiating skills as minister in charge of the Trans-Pacific Partnership and a Japan-US trade deal. Kono, as foreign minister, took an extraordinarily hard-line approach to South Korea on the issue of wartime labour, and in his new role as defence minister, he is expected to develop closer defence ties with the United States and other like-minded nations, while maintaining a tough stance on North Korean missile and nuclear issues.

Among the 13 new ministers in Abe’s reshuffled cabinet, the standout is 38-year-old Shinjiro Koizumi, son of the former Prime Minister Junichiro Koizumi, a popular and reformist prime minister from 2001­ to 2006. Shinjiro Koizumi is the new environment minister and minister of state for nuclear emergency preparedness. This is his first cabinet-rank appointment, although he has served in junior ministerial positions in the past. He is also the third-youngest minister in Japan’s parliamentary history (the youngest being Yuko Obuchi, appointed minister at age 34), in a country where seniority is generally preferred over merit.

While coming from a well-recognised political family, Koizumi’s political strengths are not simply derived from his family background. Elected to the lower house four times from his father’s electoral district in Kanagawa, a neighbouring prefecture of Tokyo, Koizumi was educated at Columbia University and was affiliated with the Centre for Strategic and International Studies, a high-profile US think tank based in Washington. Koizumi is a fluent English speaker and can interact with many world leaders without an interpreter.

Koizumi is a highly popular and charismatic politician, a rarity in Japan, and pulls in a crowd whenever he speaks at public gatherings. He is often invited by fellow LDP politicians to give speeches during election campaigns because of his powerful and persuasive speaking style. He has also acquired significant policy expertise in areas such as agriculture and social security issues through forming “policy study groups” for brain storming sessions, which include Japan’s top academics, thinkers and practitioners.

Koizumi’s inclusion in the new Abe cabinet, although expected, may not seem to be a perfect fit, as prime ministers distribute ministerial portfolios to close party friends, allies, and faction leaders ­– which Koizumi is not. In the 2018 LDP presidential race, Koizumi openly supported Abe’s rival Shigeru Ishiba for the party presidency, which carried with it the premiership, as the party had a majority in the lower house.

On policy matters, like his father, Koizumi is essentially anti-nuclear and wants dismantling of nuclear facilities in Japan, while the LDP and Abe want to continue with the nuclear power plants under new safety rules and regulations. Also, one of Abe’s dreams is to amend the constitution during his term, which is likely to end in 2021 (if not extended). But Koizumi has not openly supported Abe’s constitutional amendment proposal.

It remains a puzzle why Koizumi got such an important cabinet position, even though he is not a supporter of Abe or his political agenda. Koizumi does not belong to a powerful LDP faction, a key factor in deciding cabinet posts, nor is he even a seasoned politician with a large following of LDP parliamentarians. Koizumi’s popularity is a factor. He often comes very close to Abe in leadership popularity rankings, and even surpassed Abe recently. With his appointment, the popularity of Abe’s cabinet received a significant boost.

Koizumi as environment minister faces difficult challenges, such as climate change, along with lingering issues from the 2011 Fukushima nuclear disaster. He has vowed to tackle both, and wants to see Japan as a global leader on environmental issues and for the UN Sustainable Development Goals, as outlined at the Osaka G-20.

This means no longer will Koizumi’s ready media engagement and star-like looks count – he will now be judged on his performance. One test would be whether he sticks to his plans on nuclear reactors or buckles under party pressure. Will he also be the first cabinet minister to take paternity leave, as he announced recently, and how will this be seen?

For Koizumi the road to ultimately taking on the prime ministership may prove to be a long and winding one. He will need to prove that he has the ability to implement his policy agenda and tackle some of the most pressing environmental issues that Japan and indeed the world confront today.

Shinjiro Koizumi will be a most watched Japanese politician for many years to come.

Previous Article
A White House dinner for two: A tell-tale of tweets and transcripts
Next Article
Afghanistan – what’s next?

Satellite imagery reveals the transformation of an Indian Ocean island into a strategic outpost. Many questions remain.
Elliot Brennan 16 Apr 2020 12:00