Since the beginning of Germany's election campaign a few months ago, Christian Lindner has demanded his role on centre stage. His slightly dishevelled face stared out in black and white from every brochure, billboard and advert for the Free Democratic Party (FDP), shamelessly transforming the proud liberal party into the domain of one man. So it was only fitting that it was Lindner who dramatically walked out of coalition negotiations with Angela Merkel last week, telling the public his party had refused to compromise on its principles.

The FDP's termination of the coalition talks triggered a cavalcade of hysterical headlines. 'Stunde Null' declared the cover of Der Spiegel on Thursday: 'Zero Hour', a facile reference to the devastated, bomb-swept Germany of 1945. 'Him or her?' questioned Die Zeit, depicting Lindner and Merkel tensely seeking to stare the other down. For a country that has relentlessly (and often arrogantly) promoted itself as a bastion of stability in a landscape of political chaos, the embarrassment was sharp and acute.

But the hurried schadenfreude of Germany's neighbours is surely misplaced. The saga represents neither crisis nor collapse. Albeit with great caution, the opposition Social Democrat Party (SPD) has again opened itself to the possibility of supporting a Merkel-led government. Martin Schulz, its Chancellor candidate from September, has been wrenched from his resolute opposition by worried MPs who fear a continued fall in SPD support in any premature election. And of course the spectre of the Alternative für Deutschland (AfD) haunts these discussions at every turn; at no cost do the major parties want to risk galvanising support for the far right. In this sense, a Grand Coalition is inherently dangerous: it would elevate the AfD to the status of official opposition while replicating the very political conditions that allowed it to flourish in the first place.

At the time of writing, it is unclear whether a formal coalition will emerge, or if Merkel will, against her wishes, be forced to rule a minority government dependent on Social Democrat support to pass legislation through the Bundestag. But the stakes are high. Should a new Grand Coalition (or 'GroKo' for short) emerge from this morass, it would represent a fundamental change in the character of the German government. Fearful of repeating its 2013-17 experience, the junior partner would be more assertive, while a weakened Chancellor will face ongoing internal troubles, energised by the prospect of a post-Merkel era.

This would be a change of particular importance in relation to Europe and Germany's place within it. Europe policy was central to the breakdown in Berlin, in particular the European stability mechanism, to which the FDP is uncompromisingly opposed. Where liberals demanded stasis on Europe, the Social Democrats will demand movement. This will be a critical internal test for Merkel, who struggled during the failed coalition negotiations to synthesise her own approach to Europe with that of the conservative wing of her party.

Her pragmatic Europeanism, driven by the pursuit of German interests, contrasts sharply to the idealism of Emmanuel Macron. In his book Revolution, as in his Sorbonne speech, the French President has urged a rapid reinvigoration of the European idea, jointly led by France and Germany. It would be difficult to understate the significance of Macron's Sorbonne speech. Macron is an audacious politician, but to speak with conviction of 'European sovereignty' bespeaks something historic. Should he fail, he will cut a quixotic figure. But without German support, his vision is impotent.

There are many in Germany, especially on the centre-left, who share the French President's vision. And there are very few who are opposed to the European project altogether (these days even the AfD rarely condemns the EU wholesale). Where German politicians differ is in the degree to which the EU is viewed as an instrument for German interests. This is a problem that years of French paralysis have eliminated for Macron: the dream of directing Europe from Paris is no more. Instead, French success is expressed through European success.

Macron wanted to hit the ground running with his reform program as soon as the German elections were over. Now he may have to wait until spring of next year, after fresh elections and coalition talks, and at which point long-neglected domestic issues will be of much more pressing concern than turning into practice a grand European vision. Worse still, it is utterly unclear what result a new election would produce.

But this is very much a worst-case scenario. According to opinion polls, the German public favours new elections over the alternatives; unfortunately for them, the political leadership does not. Regardless, the uncertainty in Berlin will linger for months. Coalition arrangements are tense affairs, and the SPD will leave no stone unturned in exploiting Merkel's political vulnerability. But she will limp on. Nobody doubts that her chancellorship is in its twilight. Her party's election platform was insipid; its performance poor. Still, a deal with the left-wing parties could in fact help hold her in the Chancellorship. The SPD and the Greens, after all, are much more amenable to working with a centrist like her than the conservative alternatives of her own party.

So what might we expect from fresh German elections? The hope for the CDU will be that voters who deserted them for the AfD will now favour strong government over protest, and that many FDP voters will return after being disappointed by the failures of the coalition talks (unlike other smaller parties, FDP voters often vote in the expectation that their party will join government). If some initial polling figures can be believed, however, both FDP and AfD voters overwhelmingly support Lindner's move. An election would be a last resort, and would bring untold uncertainty to the political centre of Europe. Meanwhile, Macron waits impatiently. 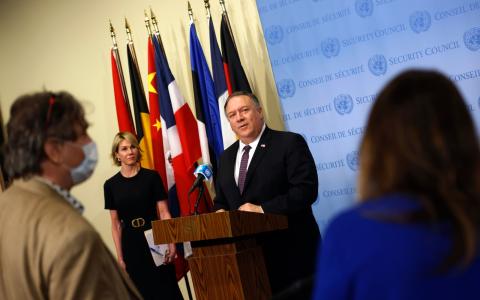 Show Comments
Previous Article
Keep Calm and Step Up: The White Paper's message on the Pacific
Next Article
Foreign Policy White Paper sees a new Asia but pleads for the old