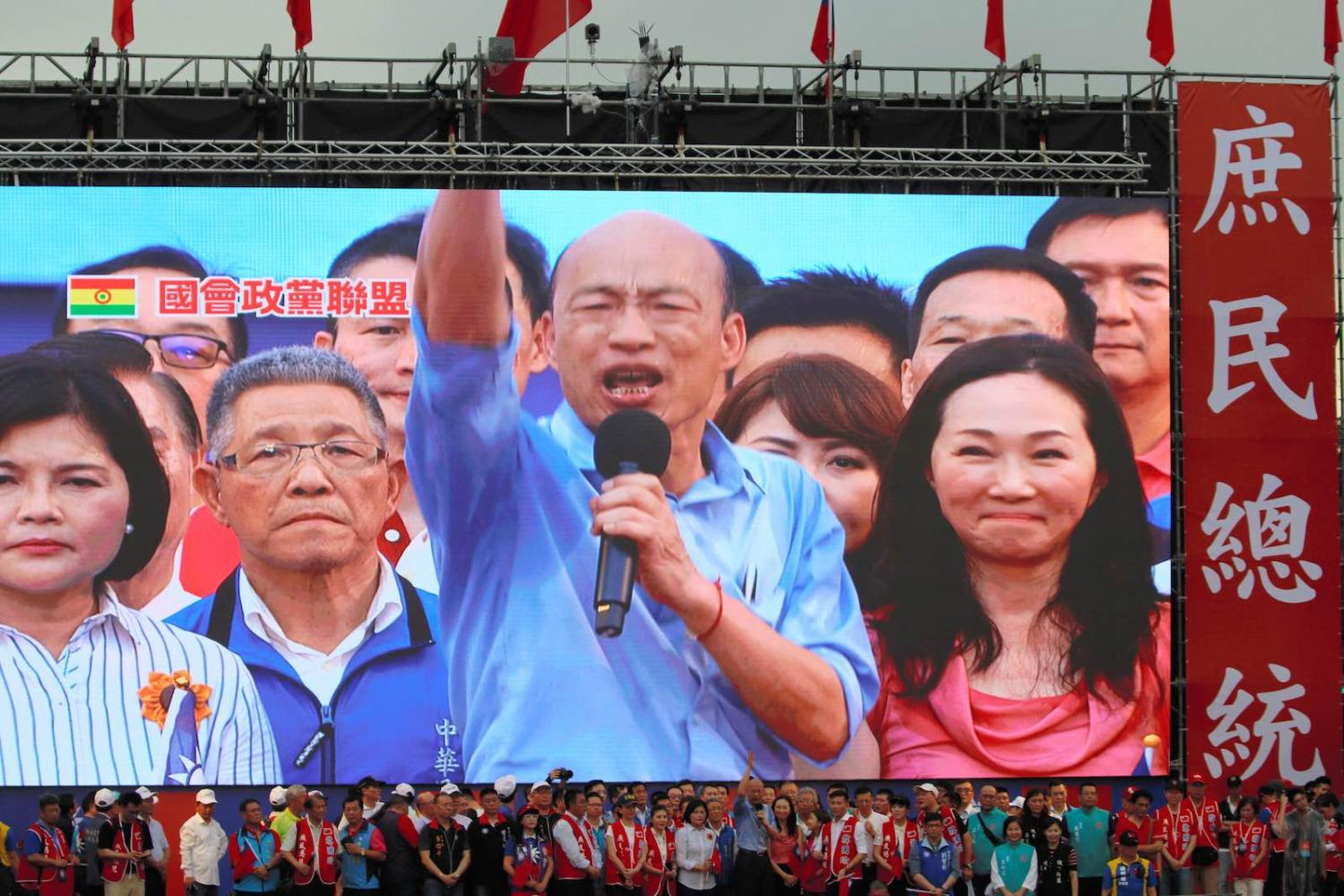 It was Han’s classically eccentric approach to countering an outbreak of dengue fever in the southern Taiwanese city Kaohsiung where he serves as mayor and to answer to the resulting criticism he has faced for a lax response to the problem. Han, with his customary rolled-up sleeves, yelled down from the tree to onlookers and assembled press that mosquitoes could breed in holes of water, then ordered health personnel to fill them.

Han Kuo-yu has decided in order to show progress on resolving the outbreak of dengue fever in #Kaohsiung (a matter he has shown utter incompetence in) is to climb atop a tree to "check" the outbreak.
He is the KMT candidate running for president. #Taiwanhttps://t.co/OtiYfGtRgz pic.twitter.com/BWbG53GqXP

Images of Han in the banyan tree drew adoration from his supporters, ridicule from his critics, and an array of memes (one portrays Han as King Kong climbing the famed skyscraper Taipei 101). It’s a cocktail of attention – nearly equal parts love and scorn – that follows Han everywhere he goes. The populist upstart presidential candidate is the indisputable id of a presidential campaign defined by deepening divides among voters and an external tug-of-war between China and the United States.

To supporters of Han, who recently won a primary battle against Foxconn founder Terry Gou, his promises of prosperity via increased trade with China are the answer to a sluggish economy under President Tsai Ing-wen of the ruling Democratic Progressive Party (DPP). To supporters of Tsai, Han’s promises are not only empty, they are a Trojan horse for an increased Chinese incursion into Taiwan’s economy and, by association, its sovereignty.

Tsai tends not to draw huge crowds to rambunctious rallies, but June protests denouncing pro-China “red media” and in solidarity with Hong Kong protestors also brought out thousands to the streets of Taipei.

Tsai recently told voters next January’s election will be “a choice between value systems and ways of life”. The Taiwanese President, pragmatic to a fault and never known for being a strong public speaker, has recently rebounded from a lull in popular support by opposing Beijing’s “one country, two systems” framework for Taiwan and supporting protestors in Hong Kong – in the process, presenting herself as the only candidate fully devoted to preserving Taiwan’s sovereignty, which is something most Taiwanese voters want.

Han has retained ardent support from a base of older, more conservative voters who turn up by the tens of thousands to rallies around the country. The “Han wave” – the devoted following he commands – has been attributed by many to pro-Beijing Taiwanese media outlets showering him with around-the-clock positive coverage. However, even major DPP-leaning outlets have covered Han more than any other political figure, albeit more critically. Han remains a magnet for the country’s attention.

Tsai tends not to draw huge crowds to rambunctious rallies, but June protests denouncing pro-China “red media” and in solidarity with Hong Kong protestors also brought out thousands to the streets of Taipei, coalescing with her recent spike in domestic support. Even there, the name on most lips was Han Kuo-yu: the prime beneficiary of “red media” reports and the man who notoriously claimed not to know about the Hong Kong protests.

Tsai is determined to portray herself as the adult in the room. Her reelection campaign began with an English-language announcement in an interview with CNN, a clear indication of her intention to emphasise her administration’s strong ties with the US and its push to gain support for Taiwan from the wider international community. In the process, she has forced Han to defend himself from allegations of his closeness to pro-Beijing forces – he has stated his opposition to “one country, two systems,” but to his critics, his willingness to cozy up to Chinese party officials is a pretext to a dangerous level of cross-strait enmeshment to which Han is, at best, naïve and, at worst, complicit.

If Taiwan’s party primaries told us one thing, it’s that the general election campaign will hinge on an existential reading of the China question that will leave little room for compromise among a divided populace.

Tsai will attempt to rally the country behind her vow to balance a resistance to Chinese interference with a commitment to the cross-strait status quo, even as a pro-independence sect of her party attempts to potentially challenge her. But her main obstacle will come from Han’s insurgency – a force Tsai may not be equipped to fend off.

This election has unsurprisingly drawn parallels between the 2016 contest between Hillary Clinton and Donald Trump – like Clinton, Tsai is being challenged by a populist pitching overtones of prosperity and welcoming in voices of sexism, racism and intolerance, buoyed by a stubborn and easily misunderstood support base seemingly acceptant of a campaign driven by emotion rather than reason.

The election could yet be altered by more variables – Gou, the KMT runner-up, has not ruled out his own run, and independent Taipei Mayor Ko Wen-je is widely expected to join the race. Analysts believe they would be more likely to siphon votes from Han, handing Tsai an easier-than-expected victory.

But it is far too early to tell. Taiwan, longtime observer Shelley Rigger wrote in May, could be headed on a “plausible path to disaster” for the first time in decades. And a bitterly divided political climate like Taiwan’s is the ideal environment for a populist, attention grabbing eccentric like Han Kuo-yu – no matter how potentially disastrous his policies may be to Taiwan’s future sovereignty.

A rapid response with cash, immediate and unconditional, is often most effective aid in the wake of natural disaster.