The author’s imagining of how climate change might transform the US is as unsettling as it is convincingly imagined. 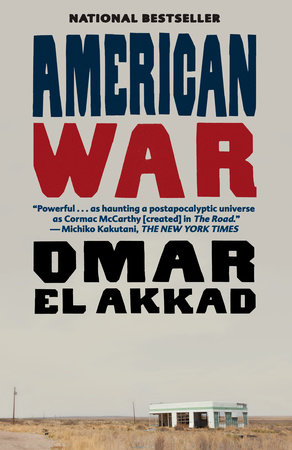 American War by Omar El Akkad is a remarkable book. Set in an America ravaged by climate change – Florida is gone, the Mississippi’s mouth a yawning chasm, much of the west coast submerged – it tells the story of a second American civil war.

While the underlying premise of the conflict, where a small group of southern states refuse to give up fossil fuels, is not especially believable, the book is most compelling in the way it tells the story of human conflict in an America that is barely recognizable. The US has been eclipsed by the Bouazizi empire and as the war begins Mexico seizes much of what remains of the American southwest, while northern California, Oregon and Washington seem likely to secede.

The novel’s intent is less to convince you how war may come to the US, but rather to put the conditions of the world’s benighted people onto an American canvass. Drawing on his experience as a war reporter, El Akkad’s rendering of an imagined US in decay is utterly compelling, with refugee camps in Alabama where people live for years, drone strikes, terrorism and radicalisation. The author’s imagining of how climate change might transform the US is as unsettling as it is convincingly imagined. The telling use of detail and subtle weaving of backstories only partially glimpsed creates a texture to this imagined world.

While readers may quibble with the overall plot and the dialogue can be clunky, as an account of a horrifyingly plausible future, the book had no peer this year.