Two heavyweight commentators duked it out on relations with China – and The Interpreter was there to watch. 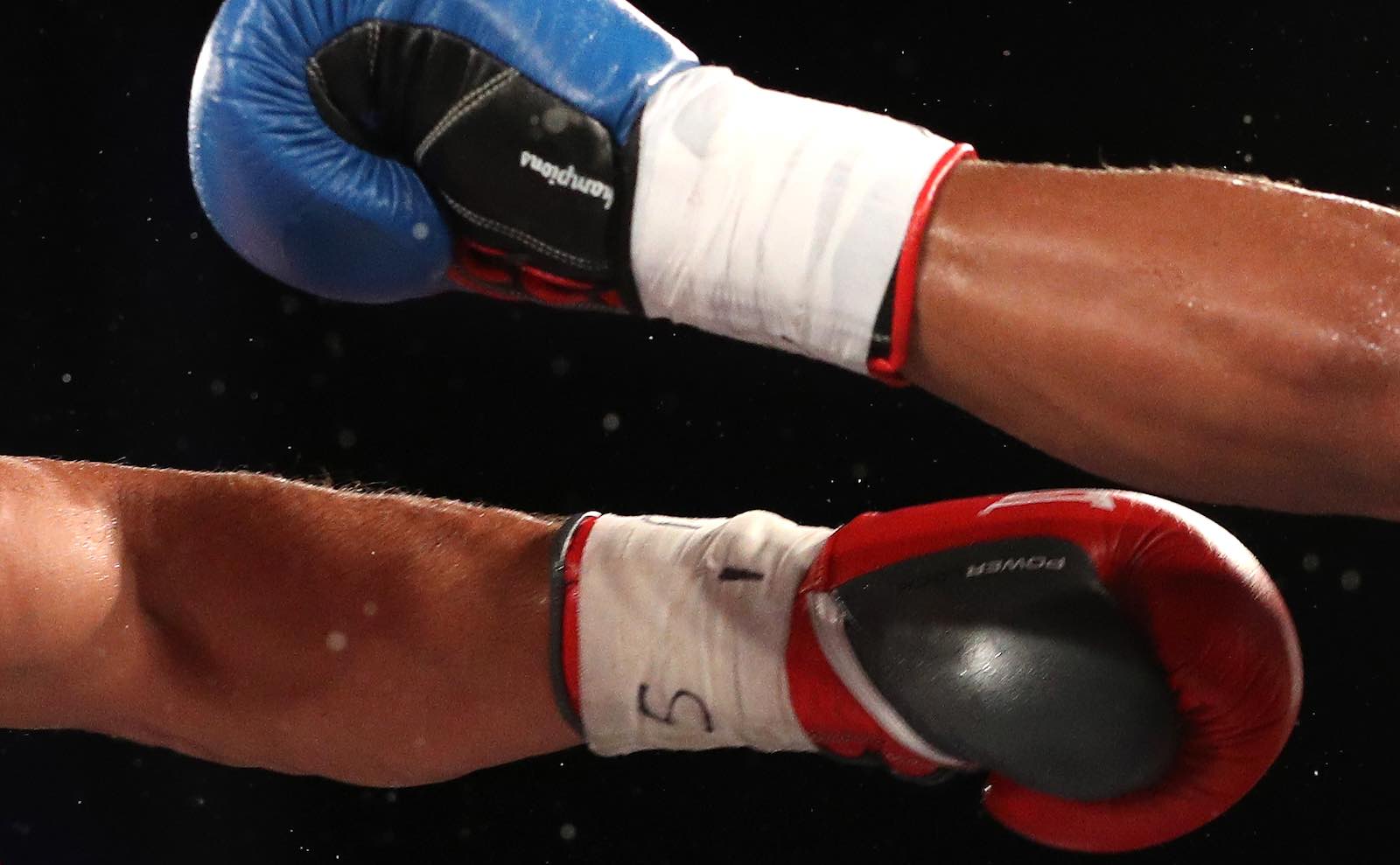 It had the billing of a heavyweight bout. A rumble in the jungle, Ali versus Foreman. During the Q&A, someone thanked the organisers for what he said it was the most anticipated fight since Mayweather and McGregor – which implied more of a scraping cage match.

This boxing match was of the intellectual kind, a near two hour debate about serious business, how Australia should manage ties with China.

There was uniform, of sorts. No silk trunks in sight, but both contenders did wear a stripped blue and white shirt – or maybe one of them was white and blue, it was hard to tell from seats in the packed crowd at the Victorian State Library and hosted by La Trobe University. Yet surely the wire-rimmed spectacles perched on the face of the two men sitting opposite had been worn without expecting an actual physical blow.

So let’s leave the theatrics in the theatre – this boxing match was of the intellectual kind, a debate about serious business, how Australia should manage ties with China.

Sure, a couple of jabs and jibes were thrown. Yet those hoping for a punch-up on Wednesday night as Clive Hamilton appeared on stage with Hugh White, two of the most prominent and influential commentators about Australia and China of recent times, will need to sate a blood lust elsewhere.

We differ on some important issues. But it is important to start by being clear about what we agree on.

White set out broad areas he believed he shared with Hamilton as common ground: the importance of the question about managing China, and recognising the scale of China’s ambition, both as an Asian power and to exercise influence over Australia.

At times – Clive might say more than that – the Chinese ambition to exercise influence over Australia could easily be malign. And I think we agree that one reason why it is reasonable for us to fear that is the nature of the Chinese political system, and some aspects of its governing party.

And White said the pair shared a view that the Australian political system, politicians and public servants alike, had been far too complacent about the consequences of China’s rise. Later, White criticised what he saw as a consensus view among the 100 or so senior policy makers in the foreign policy and security realm for believing Australia should be willing to go to war with China, and encourage its US ally down path to conflict.

But to the differences. How to handle China’s growing power and what it means for Australia was the difference between the two White said he mostly wanted to explore.

Clive’s argument is that the present challenge we face from China is more dire than I think it is, but that’s it’s easy to deal with. I think it’s not so bad, yet, but that it is much, much harder to deal with than his arguments suggest.

This, he said, leads to different views about what Australia should do about it.

Now, anyone who has followed White’s commentary (and Hamilton noted White has been prominent in these debates a long time) will be familiar with the analysis and prescriptions he went on to outline. Australia must be willing to make tough choices, choices that will carry a cost, and confront the complacency inherent in a belief the US will preserve the “rules based order” as an Anglo Saxon power to “make Asia safe for us”. As he summed up later with a pithy line:

The wolf won’t go away if we wave our arms away and shout at it. We have to be prepared to live with the wolf. But also not panic. We don’t have to surrender everything, but we do have to choose our battles wisely.

The prospect of a war between the US and China had a high likelihood of crossing a nuclear threshold and “the worst war in history ... [and] make World War I look like a picnic.” Yet the good news was this won’t happen, because the US will back from Asia. “In the end, this is not America’s backyard, it’s China’s backyard.”

A bit reluctantly, I have to say, but it’s been very good to be drawn out of one’s comfort zone … And to Hugh, for presenting such a compelling argument as he typically does, and of course his arguments have been very influential in the public debate, which is why it’s a bit daunting to take him on.

Yet Hamilton said a critique of White was needed, with the basis for the debate requiring an accurate understanding of the Chinese Communist Party regime, its objectives and modus operandi. He later argued a “be friendly to Beijing” attitude had permeated the Department of Foreign Affairs and Trade.

I’ll argue that Hugh’s analysis of the situation Australia faces is so wrong because he doesn’t understand the nature of the CCP regime.

And Hamilton had his own pithy analogy to describe what he saw as mistaken in White’s perspective.

Australia is just a boulder, sitting on one tectonic plate, which is being pushed back by another, and we’d be better off rolling across to the advancing one.

But such “counsel of defeat”, as he later put it, a view of Australia as a victim of great power politics, robbed the country of its own agency. Besides, Hamilton said, US officials had not surrendered its place in Asia or believe “a new Cold War with China will be easy to win – in fact, they all think, if you talk to them, precisely the opposite“. He argued it was still early days, and in time Washington’s approach to China would become clear.

Instead of traditional theories of great power rivalry, drawing on misplaced lessons of Thucydides, Westphalian traditions and notions of a balance of power, Hamilton said a different understanding was required, to understand the CCP’s view of “political warfare”.

Some of us, watching the CCP’s frightening internal suppression, and the spread across the world of its mechanisms of censorship, interference, suppression of dissidents and generalised bullying, we think living in a CCP-dominated sphere of influence would be very unpleasant indeed.

Xi Jinping had changed China far more than Donald Trump has changed the United States, he went on to say, and understanding the “pressure cooker” in China was crucial. The tactics employed by CCP, seeing itself at war with the West – and in this war “is not a metaphor but a different understanding of war as a means of subduing adversaries”. This “political warfare” was complemented by economic coercion as well as efforts to target elites inside other countries and influence them to argue Beijing’s case.

It is a very different way of conducting a strategic contest, Hamilton said.

Put simply, while Hugh is preoccupied by with how states use their strengths to impose their will on each other, I am arguing that Beijing is playing a very different game. Rather than applying pressure from without, it is attempting with considerable success, to undermine resistance from within … that’s what’s happened, I’m suggesting, when he suggests we must accept Beijing’s hegemony – he’s been psyched out by the CCP’s political warfare.

Around this point, the ref, La Trobe University’s and The Interpreter regular Bec Strating, called for audience questions. They came thick, on topics involving public opinion, cyber attacks, the reliance on fees from foreign students in Australian universities, and measuring economic benefits.

Former journalist and former official John Garnaut stood and asked whether the views of the men had shifted in the past year (White said not, Hamilton said deeper and refined).

And then to final words and the search for a knockout blow.

White: “I do not share his confidence that America is going to get its act together.”

Hamilton: “The great ship of state, even if the captain at the moment is bonkers, isn’t turned around so easily.”

Out of this is confirmation of the thought that did emerge in the last couple of pages of Clive’s book, that he is amongst those who believe we should be willing to go to war with China in order to defend the existing regional order and contain China’s challenge.

We’re leading the world in the push back in terms of how to protect domestic institutions and democratic practices from PRC interference and the rest of the world is coming to us to see what we’re doing, how we’re doing it … that’s why I’m critical, Hugh, and despite your rejoinder will continue to be critical because of how you frame it.

As a final, final note, this one from me, when Strating asked for “another Round”, this was actually in reference to another round of questions. And you can bet this particular fight over China will produce plenty yet.