If Duterte likes his human rights record, he can let others look

An international investigation is the best way to address concern about the “war on drugs” in the Philippines. 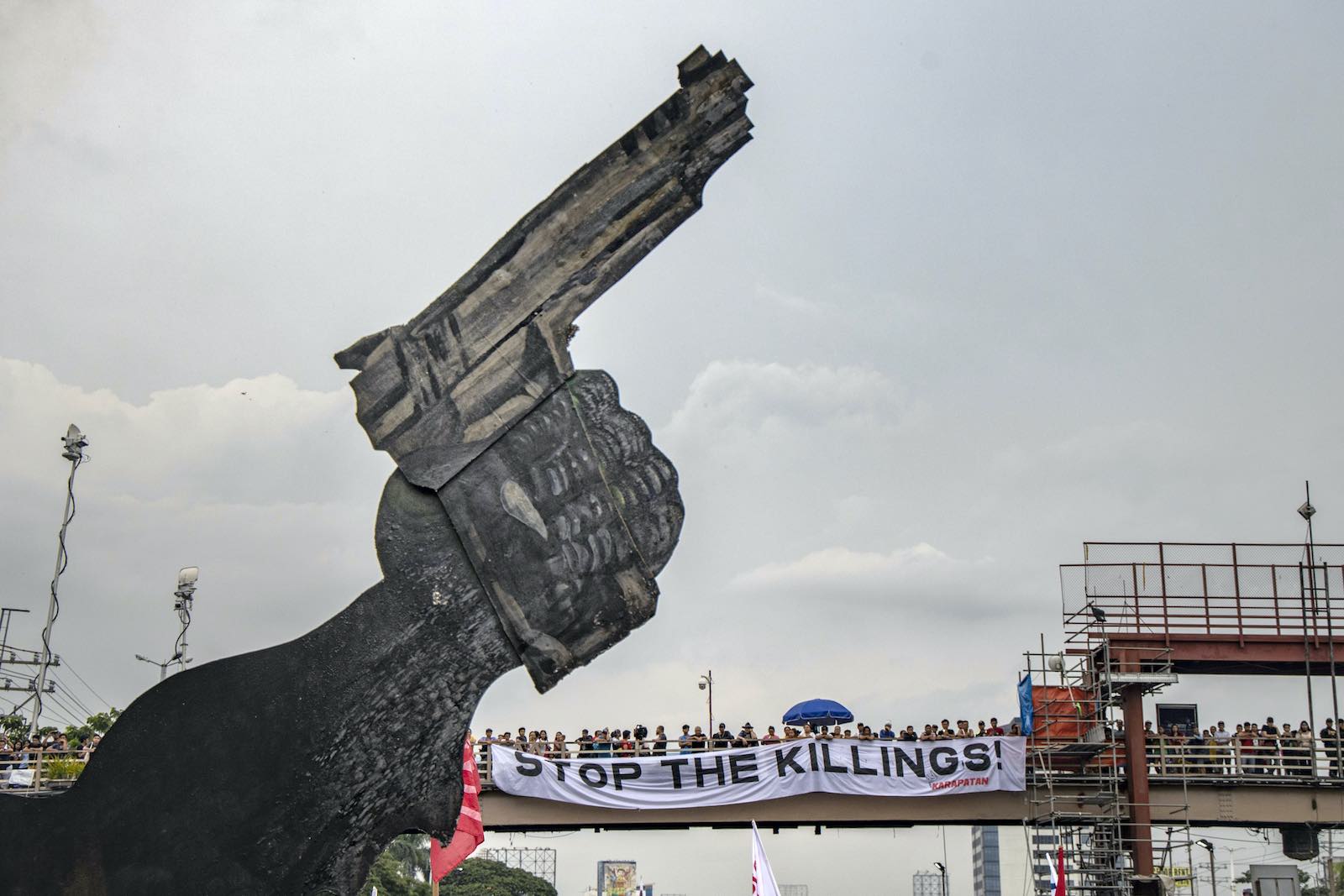 Demonstrations in July 2019 outside the Philippine congress in Manila demanding an end to the so-called “war on drugs” (Ezra Acayan/Getty Images)
Published 15 Oct 2020 07:00   0 Comments       Follow @shannonmtorrens

President Rodrigo Duterte of the Philippines addressed the United Nations General Assembly last month, the first time he has done so since he assumed office in 2016. During his speech, Duterte said that the “Philippines will continue to protect the human rights of its people”. Alluding to the allegations of human rights and international law violations that have been made against his government, Duterte claimed that “interest groups have weaponised human rights” to discredit his government.

There is clearly something amiss between the words of Duterte and what is occurring on the ground in the Philippines. The week prior to Duterte’s speech, Agnès Callamard, the UN special rapporteur on extrajudicial, summary or arbitrary executions, reiterated calls from human rights experts for the UN Human Rights Council to establish an independent investigation into the situation in the Philippines. That same week, UN High Commissioner for Human Rights Michelle Bachelet, speaking at the 45th Session of the Human Rights Council, said that the Duterte government must halt its violent policies and rhetoric which leads to killings and human rights violations.

Duterte has long had a tense relationship with the UN, threatening to withdraw the country from the organisation at the start of his presidency, after a UN human rights expert said that Duterte had violated international law through his “war on drugs”.

And yet his speech comes amidst an alarming period in the history of human rights in the Philippines. There have been a number of particularly concerning developments in the country during the Covid-19 pandemic, compounding long-term human rights and international law violations. Earlier in the year, Duterte warned that he had ordered the police and military to shoot dead anyone who did not comply with Covid-19 restrictions. In other comments, Duterte said, “I might declare martial law, and there will be no turning back”. The situation between the government and civilians became increasingly tense, with Philippines Senator Bong Go announcing he had body bags for “drug addicts or peddlers of fake news”.

The threats are bad enough. But it has also been reported by human rights groups that not only adults, but also children are facing abuse and degrading treatment for violating Covid-19 restrictions, with allegations that children were confined to dog cages, locked in coffins, had their hair cut off and have been stripped naked before being forced to walk home. By only March, 17,000 people had been arrested for violating Covid-19 measures.

What is needed is an independent investigation, as well as the swift conclusion of the International Criminal Court’s preliminary examination into international crimes committed in the country.

The ICC inquiry stems from earlier instances where Duterte’s threats and incitement to violence have raised international criticism and prompted responses. There have been previous allegations of human rights violations and international crimes in the Philippines, including extrajudicial killings, arbitrary detention, torture, inhuman and degrading treatment.

It has been estimated that tens of thousands of people have been killed as part of this operation since 2016, most of them from poor and marginalised communities.

In February 2018, the Prosecutor of the International Criminal Court, Fatou Bensouda, announced that she intended to conduct a preliminary examination into alleged crimes, including extrajudicial killings committed in the Philippines as part of Duterte’s “war on drugs”. The Philippines subsequently withdrew from the ICC, but the preliminary examination is still ongoing.

It has been estimated that tens of thousands of people have been killed as part of this operation since 2016, most of them from poor and marginalised communities. Human rights groups have said that deaths due to the “war on drugs” increased during the Covid-19 lockdown, with police killing 50% more people between April and July 2020 than in the previous four months.

In emergency situations, such as the current Covid-19 pandemic, governments take increased measures to enforce restrictions on the lives of their country’s citizens that at other times would be scrutinised and opposed far more readily. This raises questions as to how much restriction infringes to an unnecessary degree on the civil liberties and rights of a population. There is a difference between measures that will protect people and those that are merely an extension of the already authoritarian policies of a government seeking to gain further power and control.

Protecting the health of a country’s citizens is important, but it is equally important to respect international law, including human rights and the right to life. This is an issue of concern right now, not just in the Philippines but in numerous countries with authoritarian regimes and leaders who purposefully infringe on the rights of their citizens. The rule of law is as important during times of peace as it is during times of crisis – arguably even more so.

That Duterte even spoke at the UN General Assembly is a start, but he must address the significant human rights and international law violations in his country in earnest, which he did not do in his speech – and in practice. An international investigation into the “war on drugs” in the Philippines would be a positive development, and the ICC for its part should conclude the preliminary examination into the situation in the Philippines as soon as possible and open a formal investigation.