A pluck of courage, the brashness of youth, and a little ingenuity – when authorities are slow to act, people step up. 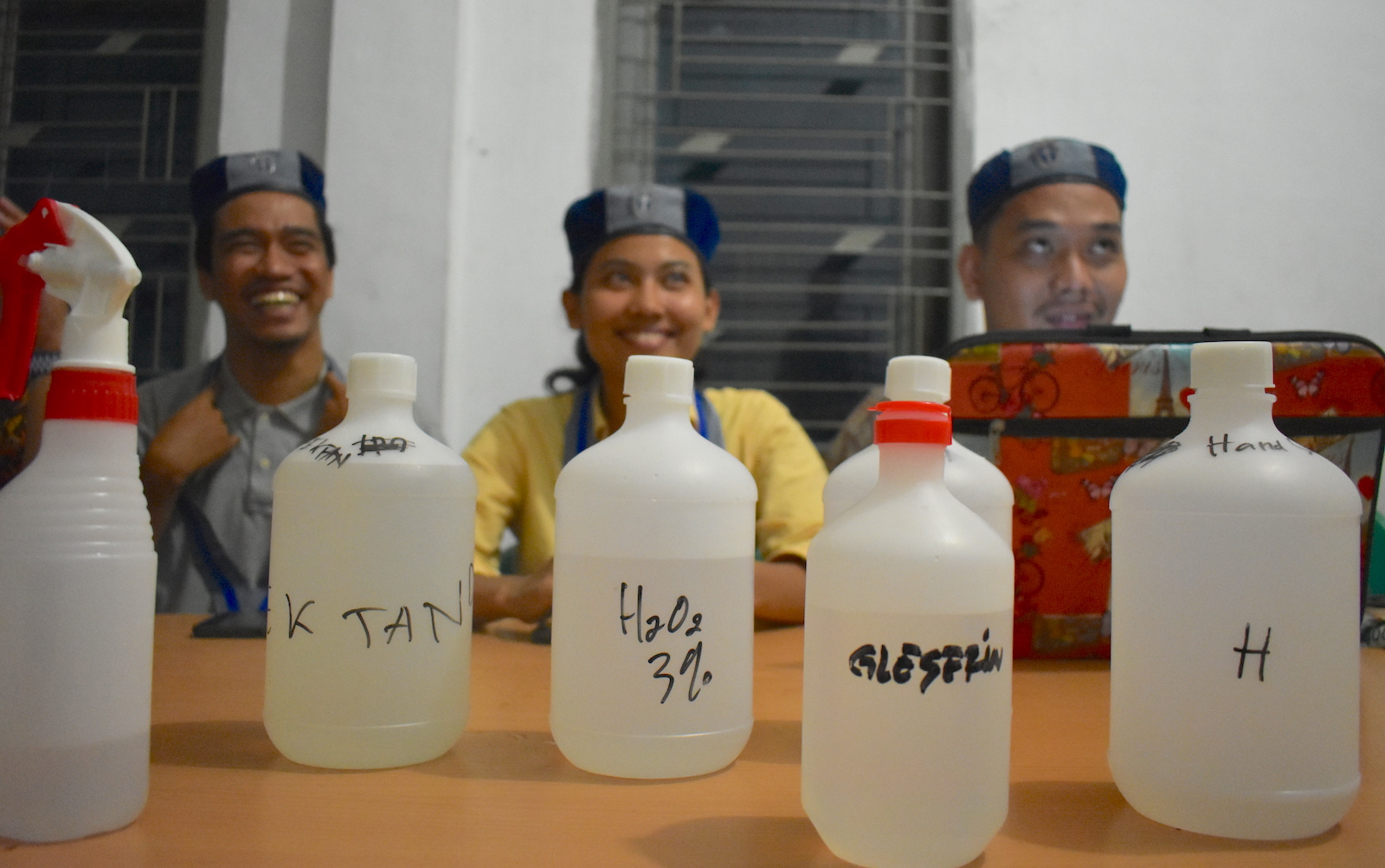 Indonesians are brilliant in a crisis. In many ways, they have to be, in a country that unfortunately experiences more than its fair share of tragedy. Sitting on the “Ring of Fire”, Indonesia is no stranger to earthquakes, tsunamis, volcanic eruptions, and floods. Its transportation safety record is similarly bleak, with plane, train, bus, and ferry disasters all too common. Sprawled across the thousands of islands that make up the archipelago, it is the “rakyat”, or the general population, who immediately rally in Indonesia, while the central administration often dithers.

The response to the coronavirus pandemic has been no different.

In Medan, North Sumatra, a plucky team of students from GMKI, or the Indonesian Students’ Christian Movement, have stepped in to fill a gap in the city’s crisis response. They have started making their own hand sanitiser.

Meliana Gultom is the head of the Medan chapter of GMKI and an education administration student. “Coronavirus has already infiltrated Medan,” she says. “We need to raise awareness about good hygiene practices, as the price of hand sanitiser has risen so sharply in the past few weeks. Making our own was something concrete that we could do to help now. We don’t just want words.”

Asked if they are not worried they might poison someone if they get the hand sanitiser formula wrong, they burst into giggles.

The students decided to make their own sanitiser using a formula from the World Health Organization that they found online. The ingredients and the equipment such as bottles and syringes were all donated by GMKI members, and on the first day of production the students made roughly five litres. They then took to the streets of Medan, spritzing members of the public with a coin sized amount of liquid to remind them to keep their hands clean. They plan to distribute larger amounts of the hand sanitiser to churches and mosques, as well as refugee settlements sheltering people from Afghanistan, Iran, Myanmar and other countries. 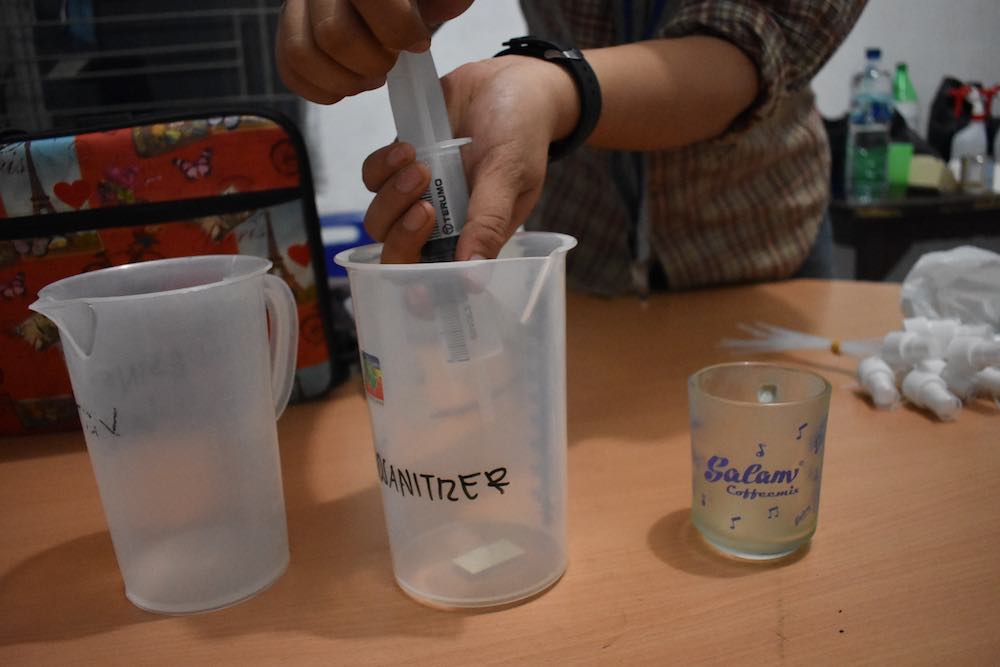 “It’s important for us to do this,” says Jaya Sinaga, Deputy Secretary of GMKI Medan. “The government doesn’t seem to have the resources to do something similar, so we are helping them. There hasn’t been a fast response from the provincial administration, so hopefully they will see what we have done and get moving.”

The Indonesian government has been widely criticised both locally and internationally for bungling its initial response to the outbreak of Covid-19. In the early days before a pandemic was declared, Indonesia’s Health Minister Terawan attributed the lack of local Covid-19 cases to the “power of prayer” and urged the public to “keep praying” in order to stay safe.

Faced with bungling from the administration, the public often takes it on itself to act. As Murdoch University’s Ian Wilson describes it, “Indonesia has long been a DIY society, largely in part due to the relative absence of reliable or equitable government services.” Religious organisations and even patronage networks often become doubly important when things go wrong, and can mobilise far quicker than the government, unfettered by bureaucracy, and often free of the red tape that government or NGOs may face.

The GMKI students are a good example. The students have the confidence of youth and the community spirit to just get it done.

Asked if they are not worried they might poison someone if they get the hand sanitiser formula wrong, they burst into giggles and point out that they have followed the WHO recipe closely. They’ve also been working with pharmaceutical students, who have supervised production. 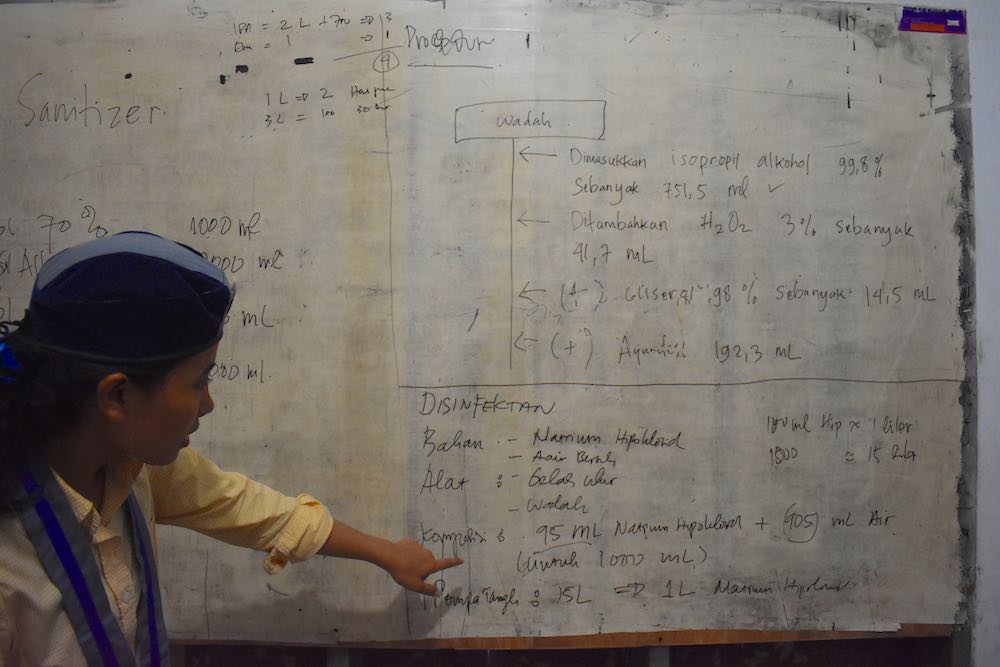 And while they may have started work quickly, their strategy is impressively well thought out. It’s not just about raising awareness about good hygiene. The students are worried that the price of the materials used to make the sanitiser will also increase in the coming months. It currently costs them IDR7,000 (0.43 cents) to make 100 millilitres of the sanitiser. “We wanted to show that it doesn’t have to be expensive,” says Gultom. “We hope the government is watching, so that they don’t let price gouging become a problem.”

“With all our resources, we will try to prevent the spread of Coronavirus in Medan. We hope everyone will follow us. We can defeat this. We’re all in this together.”

Show Comments
Previous Article
BBC Dad has learned a thing or two about working from home
Next Article
Covid-19 responses: Why feminist leadership matters in a crisis