The UN's nuclear weapon ban is a landmark treaty, but there are some serious problems with the text.

On 7 July 2017 a UN negotiating conference adopted a draft treaty banning nuclear weapons – specifically, their development, production, possession, stationing and deployment, use, threat of use, testing, and so on. The treaty will be open for signature on 20 September 2017, and will enter into force after it has 50 ratifications. The treaty will be legally binding only on those states that join it.

Some 130 states, comprising almost two-thirds of the membership of the Nuclear Non-Proliferation Treaty (NPT), participated in the negotiating conference. These states feel strongly that the NPT nuclear-weapon states are not taking seriously the commitment under the NPT to pursue nuclear arms reductions and disarmament. Although the Cold War ended almost 30 years ago, the world still has 15,000 nuclear weapons and the risk of nuclear war is increasing. A ban treaty is needed to re-energise disarmament efforts. The treaty will help to stigmatise nuclear weapons and change mindsets about retaining them.

The negotiations were boycotted by all nine nuclear-armed states (those in the NPT – the US, Russia, UK, France and China – as well as India, Pakistan, Israel and North Korea) and their allies, including Australia; around 30 states in all. These states argue that a ban treaty is unrealistic when, for the foreseeable future, nuclear weapons will remain essential to their national security. They maintain that nuclear reductions are possible only through a step-by-step approach, and can't be forced by a ban treaty. I have argued previously that the boycott was a mistake and that Australia and the others should have participated in the negotiations to ensure their views were presented and to seek to influence the text.

The nuclear weapon ban is a landmark treaty, of great political and historical importance. It should rank with the 1968 NPT which, despite some criticism about the lack of specificity on disarmament, remains a remarkable achievement after almost 50 years. The NPT was drafted with great effort and farsightedness. Unfortunately, this has not been the case with the ban treaty and there are some serious problems with the text. These problems reflect the fact that negotiations took only four weeks, an unprecedented pace for a treaty of such importance, and that the treaty was adopted without the usual practice of consensus. It would have been far better to have taken the time to resolve the problems and achieve consensus. The Netherlands voted against the treaty, and Singapore abstained. Others expressed concern about the text, but finally acquiesced. I expect we will hear more in coming months from those participants unhappy with the text.

States that join the treaty with nuclear weapons are required to remove them from operational status immediately, to negotiate time-bound plans for eliminating the nuclear weapons, and to destroy them within a deadline to be determined by the first Meeting of States Parties under the treaty (it could be some time before this meeting takes place and the deadline is set).

The main problems in the treaty relate to safeguards aspects:

1. The ban treaty sets out two different safeguards standards – a higher standard for parties that had nuclear weapons and a lower standard for all other parties. This discrimination is counterproductive to the treaty's objective. Strong safeguards against clandestine nuclear weapon programs are absolutely essential for disarmament to proceed. States will not disarm when other states seen as potential (or actual!) proliferators (such as Algeria, Argentina, Brazil, Egypt, Iran, Saudi Arabia, Syria and Venezuela) have not committed to the strongest form of safeguards.

While the issue of safeguards standards primarily needs to be resolved within the NPT or the International Atomic Energy Agency, the ban treaty should have avoided setting a lower standard. As the NPT makes clear, the achievement of nuclear disarmament requires the collaboration of all parties, not just the nuclear-weapon states. Parties that insist on lower standards for themselves are not serious about supporting disarmament.

2. A state that joins the treaty while still possessing nuclear weapons is not required to accept any safeguards until after it has eliminated its weapons. This is a major weakness – elimination could take years, during which time the state could be producing new weapons to replace those it is eliminating.

Unfortunately, the states that boycotted the negotiations will be able to point to these problems and say 'we told you so'. The problems might have been avoided if those states had participated, though no doubt they would say consensus was never going to be possible and their concerns would have been ignored.

It would be open for the UN General Assembly to direct that further negotiations be held on the text, but considering that the states supporting the text have a majority in the General Assembly, this seems unlikely. So now states that want a ban treaty will have to sign this text, despite its flaws.

The Turnbull Government has made it clear it will not sign the ban treaty. The other nuclear-weapon state allies that boycotted the negotiations will also likely not sign. It would be difficult for members of an alliance like NATO to sign, as the treaty prohibits a party from allowing stationing or deployment of nuclear weapons in its territory, and also prohibits 'encouragement' of an activity prohibited under the treaty. The stationing provision would not affect Australia, since this is already prohibited for us by the South Pacific Nuclear Free Zone Treaty. As for the 'encouraging' provision, the scope of this is uncertain.

Considering that the impetus for the ban treaty is the widely shared concern at the lack of any current action on nuclear arms reductions and disarmament, the least Australia should do is to actively encourage the commencement of negotiations to this end. Extolling a 'step-by-step' approach to disarmament lacks credibility when there are no such steps under way, or even being contemplated. An outline of the many risk reduction steps that could be taken in the near term is set out in the 2009 report of the Australia/Japan International Commission on Nuclear Non-Proliferation and Disarmament. The Government would do well to dust off this report and promote its findings. 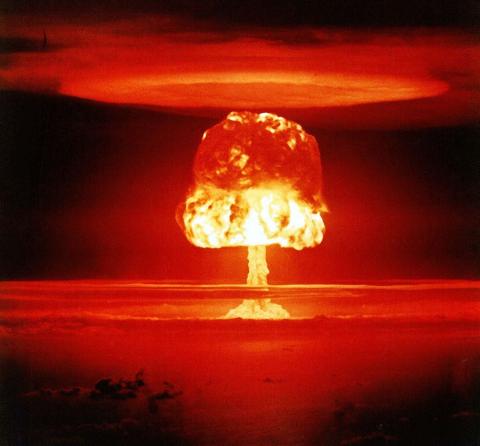 Previous Article
A new era of leadership by the G19?
Next Article
How to complicate North Korea’s nuclear weapons plans

Israel’s elections: many messiahs, but only one king

Benjamin Netanyahu survived a scare, and why should anyone be surprised when a noble amateur loses to the ruthless pro?
Miranda Booth 1 Jun 2022 16:00

Competing with China in the Pacific will backfire