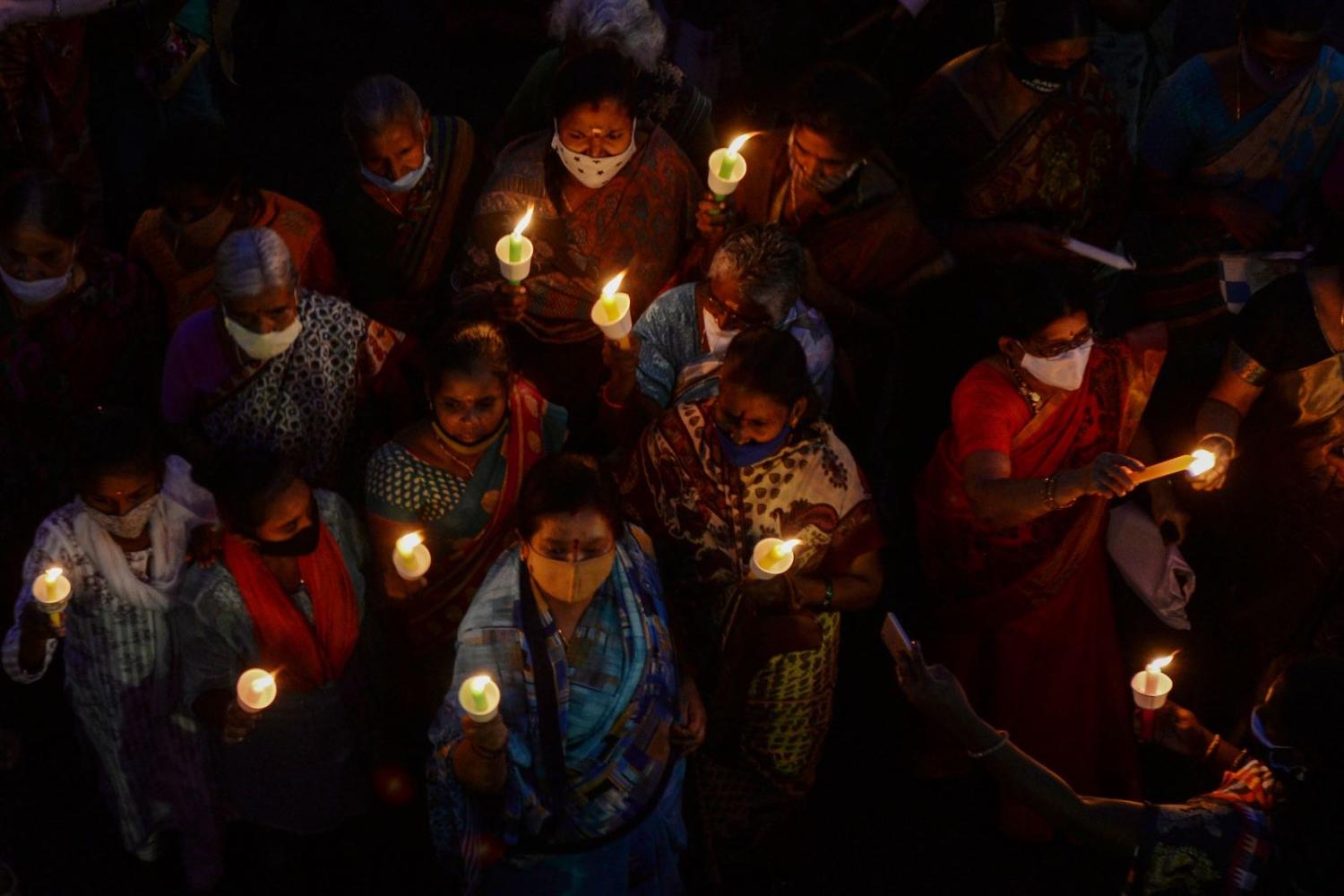 A protest to condemn the gang rape and murder of a 19-year-old Dalit woman in Bool Garhi village of Uttar Pradesh state, in Chennai on 5 October 2020 (Photo by Arun Sankar/AFP via Getty Images)
Published 18 Nov 2020     Follow @pomegranitaa

Watchers of the Netflix show Indian Matchmaking might have missed it, but for Indian viewers attuned to what goes unsaid between the lines, there was a subtext to the program that has turned out to be incredibly portentous: caste.

In the wake of the Netflix docuseries – alongside this year’s Black Lives Matter protests, a heinous rape-murder in rural India, the release of an Oprah-sanctioned book, and a Silicon Valley discrimination suit – the vexed issue of caste is having its moment.

What is caste? With its origins in Hindu society, it is a 2000-year-old system of categorising people at birth and slotting them into an entrenched hierarchy they cannot escape. US scholar Isabel Wilkerson describes it as an artificial hierarchy that helps determine standing and respect – more precise than race, getting at “the underlying infrastructure that we often cannot see, but that is there, undergirding much of the inequality and injustices and disparities that we live with”.

Much like in the case of race relations in the US, those at the top of the pile are deeply privileged, while those at the bottom find it extraordinarily difficult to escape or circumvent. Caste discrimination is meant to be illegal in India, yet permeates every facet of society, from what jobs you can do, to whether you are permitted inside temples to worship, to what food you can eat.

Various and disconnected strands have coalesced into a newfound discourse on caste, and how deeply it continues to scar modern India.

How has it lately become the topic of the moment?

Let’s start with Indian Matchmaking. The show, which follows the adventures of Mumbai-based travelling matchmaker Sima Taparia, was an unlikely hit for Netflix, stimulating a renewed understanding of the knotty methods and priorities of young Indians (or, often, their mothers’ priorities) looking to partner up. Caste was never explicitly mentioned, yet it was a glaring omission to many viewers, as it is front and centre of any talk of marriage: it is through marriage that hierarchies are reinforced and continued. Many viewers took it as a sign of upper-caste obliviousness to the issue that lower-caste members struggle against daily.

An example is that of the New Jersey model-dancer Nadia, who struggled to find interest once she revealed her family had settled in Guyana 150 years ago. “We’re Indian … we just left a little earlier than everyone else,” she tells the camera. What no one is telling her, however, is that prospective grooms – or more likely their families – are conscious that Indians who settled in Guyana all those years ago were probably low-caste, meaning Nadia, despite her seemingly high status in the US, is not an option for them.

To her credit, producer Smriti Mundhra actively listened to criticisms, even squirming through a long and sometimes uncomfortable discussion by the US group Equality Labs about the program’s representations of caste.

Indian Matchmaking was emotionally triggering for many Dalits (one name for the so-called “untouchable” caste who occupy the lowest rung on the social ladder), who saw things happen onscreen that they experience in real life: painful reinforcers and reminders of the systemic discrimination they too often face.

Yet Indian Matchmaking was a mere whistle-stop on this year’s tour of caste privilege and prejudice, as the train had already left the station. The rumblings started in May or June, as the US was wracked by Black Lives Matter protests, with which many Indians expressed their solidarity online – yet failed to acknowledge their own complicity in maintaining caste structures at home. Social media filled up with outrage over Bollywood stars voicing their outrage (but working hard to lighten their skin, so as to appear high caste).

The issue of caste is also making its way back into the mainstream consciousness in the US. Earlier this year, Wilkerson published her latest book, Caste: The Lies That Divide Us, which posits that the caste system, although born in India, is exactly the same one used against minorities in Nazi Germany and African-Americans.

Martin Luther King made the connection long ago, when on a 1959 visit to India he was introduced to school students as “untouchable” by their principal. Already having drawn on the Gandhian principles of non-violence for his civil rights activism, King drew a line between the experiences of low-caste Hindus and his own people. “Yes, I am an untouchable, and every Negro in the United States of America is an untouchable,” he said.

Martin Luther King drew a line between the experiences of low-caste Hindus and his own people. “Yes, I am an untouchable, and every Negro in the United States of America is an untouchable,” he said.

Wilkerson’s book draws a distinction between racism and the entrenched discrimination suffered by low-ranked groups through itemising “eight pillars of caste”, including “endogamy and the control of marriage and mating” (Indian Matchmaking again), “terror as enforcement”, and “inherent superiority versus inherent inferiority”.

The book, surprisingly for an academic-leaning work of non-fiction, has been hailed in reviews, described as an instant American classic, and was even an Oprah book club pick.

The next item putting caste on the agenda was a July lawsuit involving tech giant Cisco, in which an Indian immigrant engineer at the company’s San Jose, California headquarters claimed that colleagues – also Indian immigrants – were denigrating him due to caste. The “higher-caste supervisors and co-workers imported the discriminatory system’s practices into their team and Cisco’s workplace,” the lawsuit said. It was a rare lawsuit based on caste outside India; after all, caste issues are not widely familiar outside the subcontinent. “How can I tell my manager, when he can’t even find India on a map?” a complainant told NPR.

The case made headlines across the country, alongside in-depth explainers on caste, and brought home the realisation to many, Indian-Americans and non-Indian-Americans alike, that sometimes people from the same ethnicity or nationality abroad are not a homogenous immigrant bloc.

Caste violence is endemic in India, particularly in parts of the north, but a recent case was so shocking that it left the country reeling. A gang rape left a 19-year-old woman paralysed and she died in a hospital in Delhi two weeks later. The woman was a Dalit, and her four abusers from a higher caste from her village. Such attacks are fairly common, aimed at reinforcing the hierarchy, reminding untouchables of their place – and simply because the offenders know they will get away with it. Amid rising public anger, police took possession of her body and cremated it, barring family members from attending. The incident was a stark reminder of just how deep caste divisions remain, and how casually brutal caste violence can be meted out.

These various and disconnected strands have coalesced into a newfound discourse on caste, and how deeply it continues to scar modern India. In recent months, Indian magazines have devoted cover stories to caste, and in one case, an entire issue of the influential current affairs weekly Outlook was devoted to it.

Elsewhere, vocal Dalit rights activist movements are gaining traction, such as the aforementioned Equality Labs in the US, launched by the Indian-American artist and activist Thenmozhi Soundararajan. Another is Radhika Vemula, whose son made headlines nationally when he took his own life after claiming systemic caste discrimination while studying medicine at the University of Hyderabad in 2016.

Dalit activism is not without its dangers, however, with the current administration cracking down on activism of any sort and a number of protesters arrested in recent years.

This renewed lens on caste, however, might help reinforce the notion that casteism is a retrograde, derogatory and deeply prejudiced practice – and may help to move the needle on its acceptability. I’m not hopeful, though – 2000 years of entrenched prejudice is hard to shift.

The US is in a defensive crouch rather than in an expansionary mood. But bring on debate.
Kirsten Han 9 Aug 2018 15:00

Beijing’s attempts to appeal to young Chinese Singaporeans may fall on deaf ears.