For real peace, Afghanistan needs a Plan B

A US exit opens the way to complete takeover by the Taliban, precisely what they – and Pakistan – have long wished for. 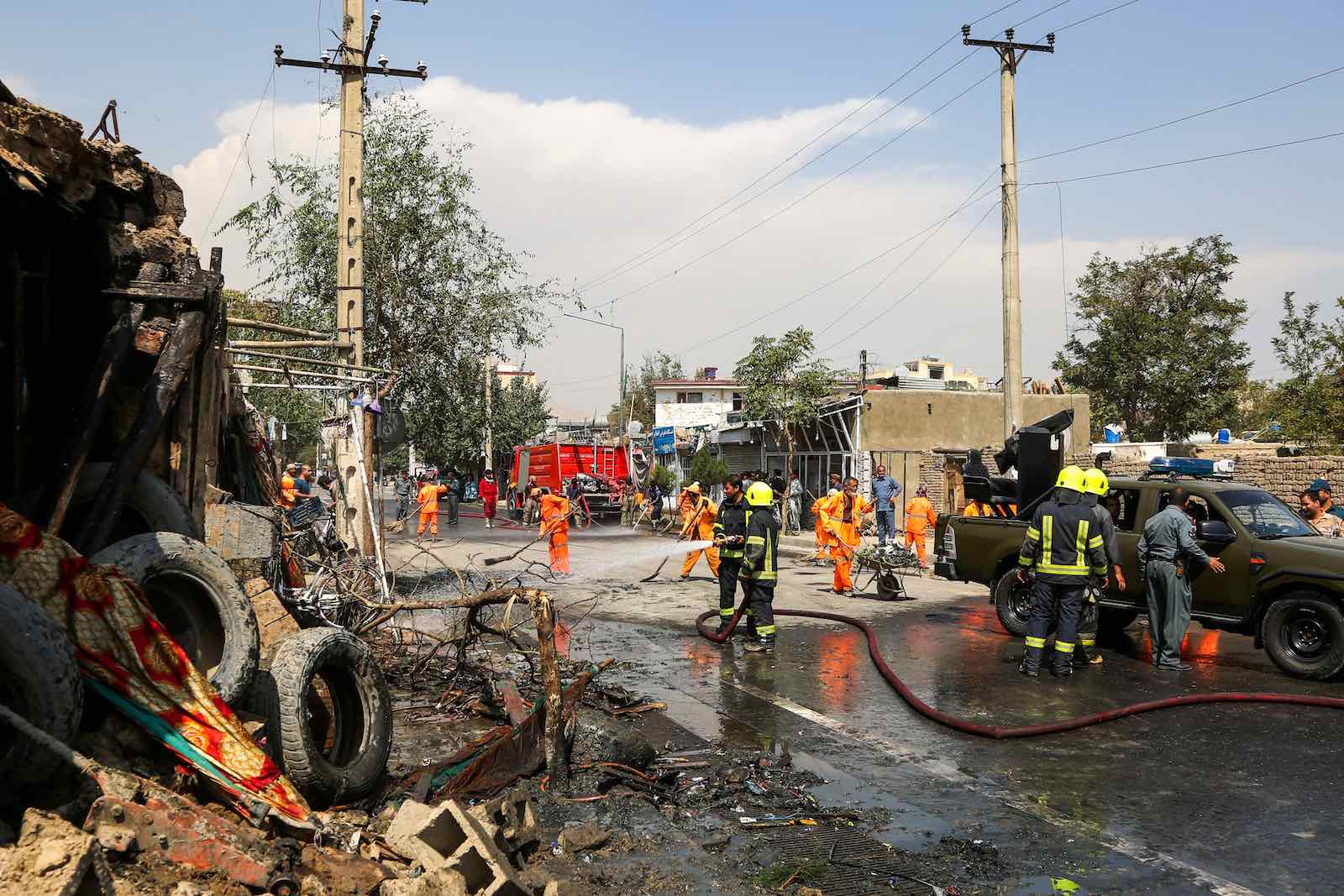 In a recent op-ed in the Washington Post, Afghan President Ashraf Ghani outlined what he saw as the objective for his country: “a sovereign, united, democratic Afghanistan at peace with itself, the region and world, capable of preserving and expanding the gains of the past two decades”. For a nation that has seen so many years of conflict and suffering, it is a goal that can’t come soon enough. And his government’s efforts to make good on the US-Taliban peace agreement signed earlier this year by releasing more than 5000 Taliban prisoners shows the lengths to which Ghani will go to prove his commitment.

The Taliban have made no comparable concessions. The Taliban’s consistent position has been to capture state power in Afghanistan. The patronage the group receives from Pakistan demonstrates their common end goal is in direct contrast to Kabul’s objectives. This kinship is unsurprising, given Pakistan’s desire for Islamist rather than nationalist rule to consolidate its influence over Afghanistan, and the Taliban’s aim to impose a puritanical Islamic state to outlaw all other forms of ideological or political competition.

If there is to be any chance of realising the vision Ghani describes, Afghanistan desperately needs a Plan B, a strategy to protect the fragile democracy the country has built over the last two decades. Otherwise, a regression to the dark days of the past is practically inevitable.

The Taliban today remain reliant on Pakistan for their existence, while Islamabad maintains its commitment to establishing a client state. The mutual alignment of their ends meant that Pakistan provided the Taliban with strategic military, economic and political support that enabled them to grow as a movement and eventually to seize Kabul in September 1996. For the Taliban to fit in with the vision of a “united, democratic Afghanistan” would require a fundamental reorientation of the movement, and a complete jettisoning of their malign character, together with a seismic shift in Pakistan’s treatment of Afghanistan as a client state.

Speaking at a recent event in Kabul, Afghanistan’s First Vice President and former head of intelligence Amrullah Saleh remarked, “What have the Taliban contributed or brought except for destruction?”

For the Taliban to fit in with the vision of a “united, democratic Afghanistan” would require a fundamental reorientation of the movement, and a complete jettisoning of their malign character.

On Wednesday this week, Saleh, a fierce opponent of the Taliban, survived a targeted attack in Kabul that killed 10 people. In predictable fashion, no one claimed responsibility, and the Taliban denied any involvement. But such attacks bear the hallmarks of the Taliban's playbook, which is to attack, then to deny, and to still get everyone to ride on the peace train.

The US desire to withdraw from Afghanistan has given the Taliban a free hand to execute attacks with impunity, as the Americans have demonstrated that they have no desire to pressure the Taliban in any way at all.

The memory of the Taliban’s brutality against ordinary Afghans when they ruled until October 2001 runs deep across the country and elicits a mix of a “never again” sentiment with a fear of revenge if they return as victors. An Afghan member of parliament with whom I spoke cautioned, “There is no guarantee about an end to the insurgency, regardless of any peace agreement. Taliban are still calling for an emirate.”

It is a fantasy to think the Taliban have changed their ways, despite being out of power for almost 20 years. Not a single Taliban statement indicates change. Reports of the Taliban’s brutality are plenty, including when their fighters overran the northern city of Kunduz in October 2016, committing extrajudicial killings, gang rapes, torture, looting and house-to-house searches by death squads. Such practices are common in areas under Taliban control or influence, and their claims of holding members of their ranks to account for abuses are fictitious, because Taliban officials do not consider such acts unlawful. The Taliban’s interpretation and application of Sharia law provides them with a permanent cover to violate human rights and still justify them, no matter their brutality.

The Taliban have never believed in elections or accountability. Taliban Emir Hibatullah Akhundzada has repeatedly called for a “pure Islamic government” but has never explained what “pure” means. What we do know is that Akhundzada and his predecessors have consistently and violently opposed elections to deter voters and to undermine the Afghan government. Voters I spoke to in the September 2019 presidential elections in Kabul stated it was their “duty” to vote, while others stressed it was an act of “defiance” against the Taliban, showing that Afghans prefer to choose their leaders rather than have them imposed.

Afghan voters expressed similar views in the 2018 and 2014 elections, for which I was an observer. Many posted pictures to social media of their fingers marked with indelible ink after casting their ballot, to reject the Taliban’s threats and acts of violence.

Electoral democracy is fundamentally at odds with the Taliban’s vision of an Islamic Emirate or state, further underlining the incompatibility of their value system with Afghan society.

The opposing strategic and security goals of the Afghan government and the Taliban – and by extension, Pakistan – mean that the space for genuine talks in the current format is virtually non-existent. In the short to medium term, intra-Afghan talks may begin, but not for bringing peace. From the Taliban’s perspective, the purpose of these talks is to facilitate a US exit from Afghanistan in a way that will present them the opportunity to push for total power.

The intra-Afghan talks will become less relevant as events on the ground overtake the negotiating positions of either party. By that time, it will be too late to rescue an overwhelmed partner.

American troop numbers in Afghanistan will drop below 5000 by November this year. Simultaneously, the Taliban will likely push for US pressure to dissolve the current Afghan government and put in its place an interim administration under the guise of a power-sharing agreement in exchange for a ceasefire. Dispatching the current establishment would precipitate a strategic vacuum that would elevate the Taliban to the status of the most powerful actor in the country.

Such a position would likely induce other strongmen to join their ranks, not because those powerholders like the Taliban, but because they want to survive. Again, it is vital to bear in mind that the Taliban have a fundamentally different idea of peace – namely peace on their terms – and that very definition translates to compelling others to submit to their rule.

The US-Taliban peace deal has built a bridge that will help the Taliban lay siege to the Afghan government, with the aim of precipitating its collapse. This sense of siege is already being felt in Kabul and also came through in a statement by Pakistan’s Prime Minister Imran Khan when he said in an interview last year that the Afghan government “was a hurdle in [the] peace process that was insisting the Taliban should talk to it”.

Commenting on Pakistan’s approach to Afghanistan, a European diplomat with whom I spoke in Kabul noted, “The Taliban will not agree to disband, because that is their guarantee to military and political survival. Pakistan has no reason to pressure the Taliban on changing its goals, because it benefits from them.”

This observation underscores Pakistan’s consistent aim with regard to Afghanistan – a weak and pliant government of its choice that it can control. Pakistan’s continued effort to seek a regime of its choice in Kabul demonstrates that it is pursuing goals that have less to do with security and more to with being a revisionist actor.

There are no easy options on the table for Afghanistan. The entry of the Taliban into the Afghan political system poses an existential challenge for the Afghan government, in that it would fundamentally and irreversibly alter the nature of the state, entrench the Taliban in Afghanistan, and cement Pakistan’s influence over its neighbour, a sovereign state.

The current peace process is skewed in favour of the Taliban, and it is in their interest to remain engaged until April 2021 to ensure the US meets the withdrawal obligations outlined in the Doha agreement. President Ghani’s negotiating team would want the Taliban to recognise the administration, accept the 2004 constitution, uphold the social, political and economic gains of the past two decades, protect women's rights, declare a ceasefire, and participate in government through national elections – all of which is wishful thinking.

In the end, the intra-Afghan talks will become less relevant as events on the ground overtake the negotiating positions of either party. By that time, it will be too late to rescue an overwhelmed partner.

So what can allies do as a “Plan B” to safeguard Afghanistan?

Contingency planning needs to focus on reassuring Kabul that it is worth protecting, which should involve certain steps. First, freeze the implementation of the US-Taliban peace deal, because the Taliban have proved unwilling to meet their sole obligation – namely, to sever ties with terrorist organisations.

A serious breakdown of the state could result in a protracted civil war that would nullify all the gains of the past two decades, which cost tens of thousands of military and civilian lives and hundreds of billions of dollars to achieve.

As I have written elsewhere, suspending talks has precedent, including by President Trump when he refused to sign a bad deal and walked out of talks with North Korean leader Kim Jong-un; and more recently in September 2019, when he aborted an earlier phase of negotiation with the Taliban. The Taliban also previously suspended talks with the US in 2012 over the issue of prisoner releases.

Second, revisit the Doha agreement after the US elections in November, because a peace deal that was rushed into place for electoral advantage is doomed to fail. Whoever wins the US presidential election will have a fresh mandate to redraw it, should they see value in Afghanistan beyond their personal electoral benefits.

Third, sustain international military pressure on the Taliban and maintain a residual force that can impose significant costs, because the Taliban have only ratcheted up their attacks. A peace agreement lacking the means to impose costs on the Taliban for noncompliance is meaningless and only serves to embolden them.

What are the likely strategic costs if the US exits Afghanistan, as per the Doha deal?

First, the flow-on effect of an American withdrawal will likely energise radical Islamist terrorist groups in Afghanistan, the region and more broadly around the globe. Such terrorist organisations would view the US exit as another defeat of a superpower in Afghanistan, convinced it was their strident ideology and brand of religion that delivered the capitulation.

The consequences of this lesson for violent terrorist groups could play out with disastrous consequences for generations, including fuelling far-right groups.

Second, an American exit is highly likely to trigger a mass refugee exodus, wherein millions of Afghans, fearful for their safety, will flee – not to Central Asia or Iran, but to Europe.

Third, a serious breakdown of the state could result in a protracted civil war that would nullify all the gains of the past two decades, which cost tens of thousands of military and civilian lives and hundreds of billions of dollars to achieve.

If the US exits and removes its political, military and financial support, Afghanistan will remain, but its 40-year war will continue until the Taliban have taken over completely or have been defeated. No external power is likely to intervene in Afghanistan unless they are compelled by major events to do so. It is not worth losing everything that has been won to a terrorist organisation that is likely to strike back one day in the name of self-defence.

Why Australia should send more military advisers to Afghanistan