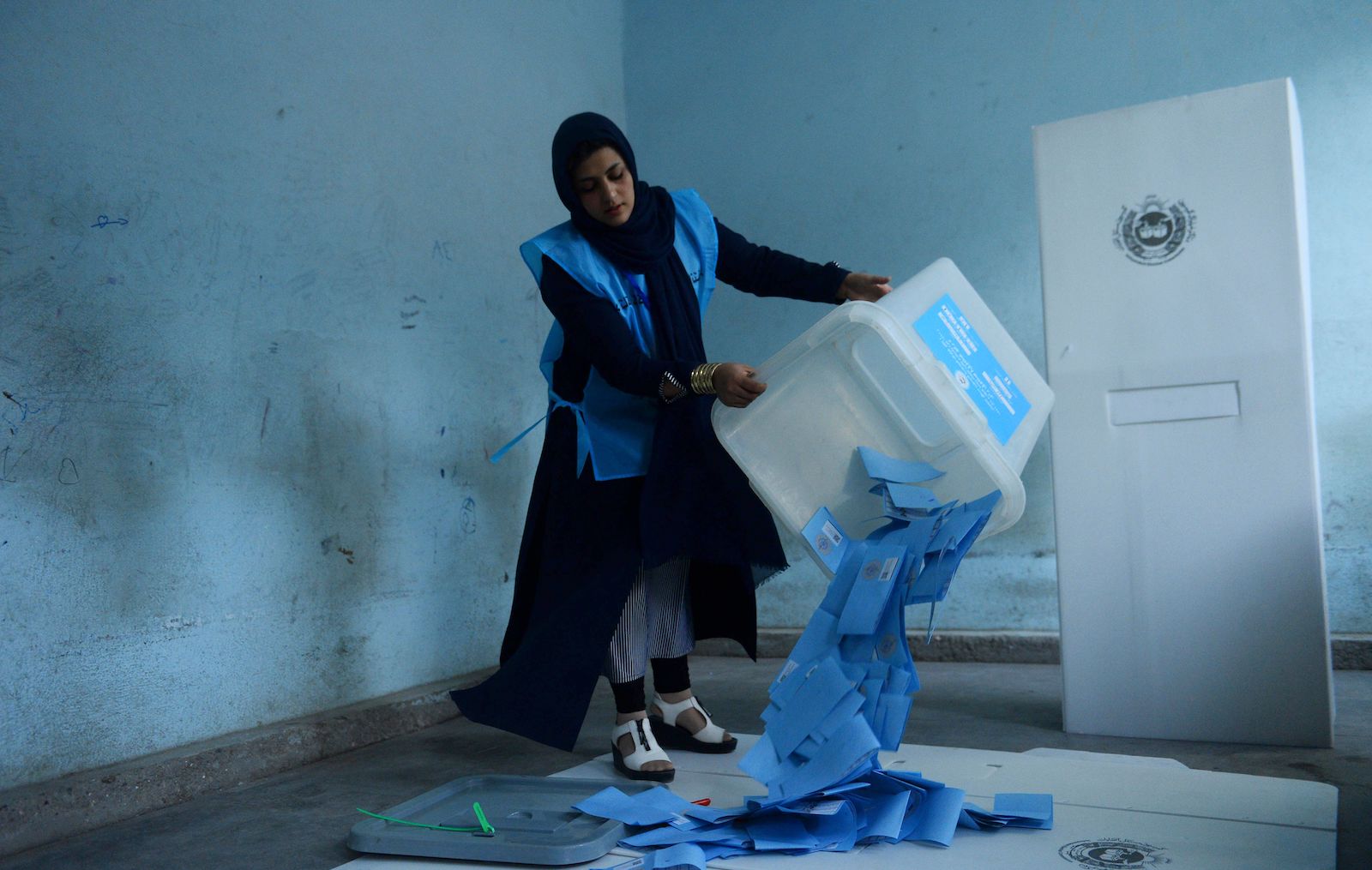 On 28 September 2019, Afghans again exercised their democratic right to vote in free and fair elections. The September presidential election was the fourth since the toppling of the Taliban regime in 2001. It was contested by 15 candidates including the incumbent, President Ashraf Ghani, and his main challenger, Abdullah Abdullah.

But voter turnout was the lowest since the first presidential election, in 2004, and it is estimated only 28% of registered voters voted. Afghanistan’s Independent Election Commission (IEC) has said that 2.7 million Afghans cast their votes (revised upward from an initial count of 2.1 million).

The leading irregularities of 2019 appear not to be ballot stuffing, as seen in prior elections, but rather voter suppression and inflated voter registration numbers.

There are three reasons that help explain this: first, the election was delayed twice since the start of 2019. Right up to the week before the election, it was not certain it would actually be held on the day.

Second, Afghans are struggling with election fatigue. Many are exhausted with polls, and the repeated fraud allegations (in 2009, 2014, and 2018) give the impression that their votes are hijacked and do not count. So why bother voting?

Third, the Taliban threatened attacks on polling day, and they made it known they would disrupt the election and target voters. Approximately 2500 polling centres were closed due to insecurity (out of a possible 7366 polling centres country-wide) and only 4905 were operational on election day.

The low turnout could potentially add to political instability. People on the ground can be heard asking, “How can this election be legitimate when 70% of the country did not vote? How can the (eventual) administration be considered legitimate?”

Irregularities and logistical shortcomings compound the problem of low turnout. In this election, instead of using voter ID cards to establish voters’ identity, the IEC relied on technology to weed out irregularities. They used biometric devices to record voter's fingerprints and took pictures of their faces. The hope was that this technology, along with the use of voter lists, would prevent large-scale and “industrial-scale” fraud. This has led some such as Michael Semple, an Afghanistan specialist, to claim that this election may be the first free and fair election ever in Afghanistan. But updated information suggests this optimism might be premature – irregularities and logistical failures were commonplace.

The leading irregularities of 2019 appear not to be ballot stuffing, as seen in prior elections, but rather voter suppression (i.e., names missing from voter lists and biometric devices) and inflated voter registration numbers (i.e., “ghost voters”). On polling day, scores of voters from around the country were unable to vote because their names did not appear on voter registration lists. The majority of such individuals were registered to vote in the earlier 2018 parliamentary elections (using the same biometric devices). Why, then, were their names missing in 2019?

There is growing concern that voter registration was tampered with, and voter suppression took place to intentionally disenfranchise voters. Names of those who were likely to vote for the “wrong” candidate were missing from the voter registration lists. Interestingly, voter turnout was severely depressed in the north and west (viewed as Abdullah strongholds) and numbers seemingly inflated in the south and south-east (viewed as Ghani strongholds). There is indication, therefore, that the preliminary figures of results or turnout being announced by the IEC do not correspond with actual vote totals.

What explains these trends? Why were names missing from lists? Was it a systems failure? Or were names removed from lists deliberately? These are questions that deserves a precise answer and explanation from the IEC ­– and the international community, including donors, must press for clear answers.

With regard to logistical shortcomings, election experts informed the authors of this report that biometric devices and lists are often unhelpful and create more problems than they resolve. (The notion that technology should not be equated with democracy is backed up by important, recent scholarship.) Is the system capable of preventing fraud?

One view is that even if the answer is no, such a system may dissuade would-be fraudsters from committing fraud. But this theory is extremely hard to test.

There is another view that the biometric system (and lists) helped to check “industrial-scale” levels of fraud. But, again, how do we test this when the number of voters was so low? In this author’s view, the biometric system has merely deluded people into thinking that it has solved the problem of irregularities.

Irregularities and logistical shortcomings can potentially impact the legitimacy of the elections. From citizens’ viewpoint, the disenfranchisement of voters requires an urgent and immediate remedy. When voters go to the polls in the face of grave security threats, they are entitled to expect that their commitment will not be undermined by irregularities.

For presidential hopefuls, the disenfranchisement of voters will prove costly. But what costs one candidate will likely benefit opponents. Hence, the losing candidate may paint the eventual winner as lacking political legitimacy, calling into question the legitimacy of the electoral process, even if large-scale fraud – ballot stuffing – was not committed. This explains why both Ghani and Abdullah are inflating the total number of votes cast to legitimise the poll and have also declared themselves the winner. The candidates are claiming victory to position themselves in the post-election negotiations that are almost certain to follow once the IEC releases the preliminary results on 18 October and the official count on 7 November.

This is political posturing. By claiming victory, the candidates are ensuring that the eventual winner will be forced to fend off fraud allegations, and perhaps even negotiate power with the losing candidate. It is the beginning of a likely drawn-out “bargaining” process between the presidential hopefuls to share power, reminiscent of 2014. Anthropologist and Afghanistan specialist Noah Coburn has argued elsewhere that in recent years, Afghanistan’s political elite “have used disputed election results to negotiate power-sharing arrangements.”

One of the author’s own research (here and here) shows that candidates mobilise their ethnic support base and undermine the reputations of rivals (through accusations of corruption and electoral fraud). This strategy nearly brought the country to the brink of civil war in 2014. Political Scientist and Afghanistan specialist Dipali Mukhpadhyay fears intra-elite conflict risks instability – again – and does not rule out the possibility of violence. Such a scenario would benefit the Taliban, affording them leverage at any future peace negotiations with the eventual Afghan administration. The international community must act decisively to ensure stability.