The affluent city-state gained independence over a half-century ago, but a deeper past is still present. 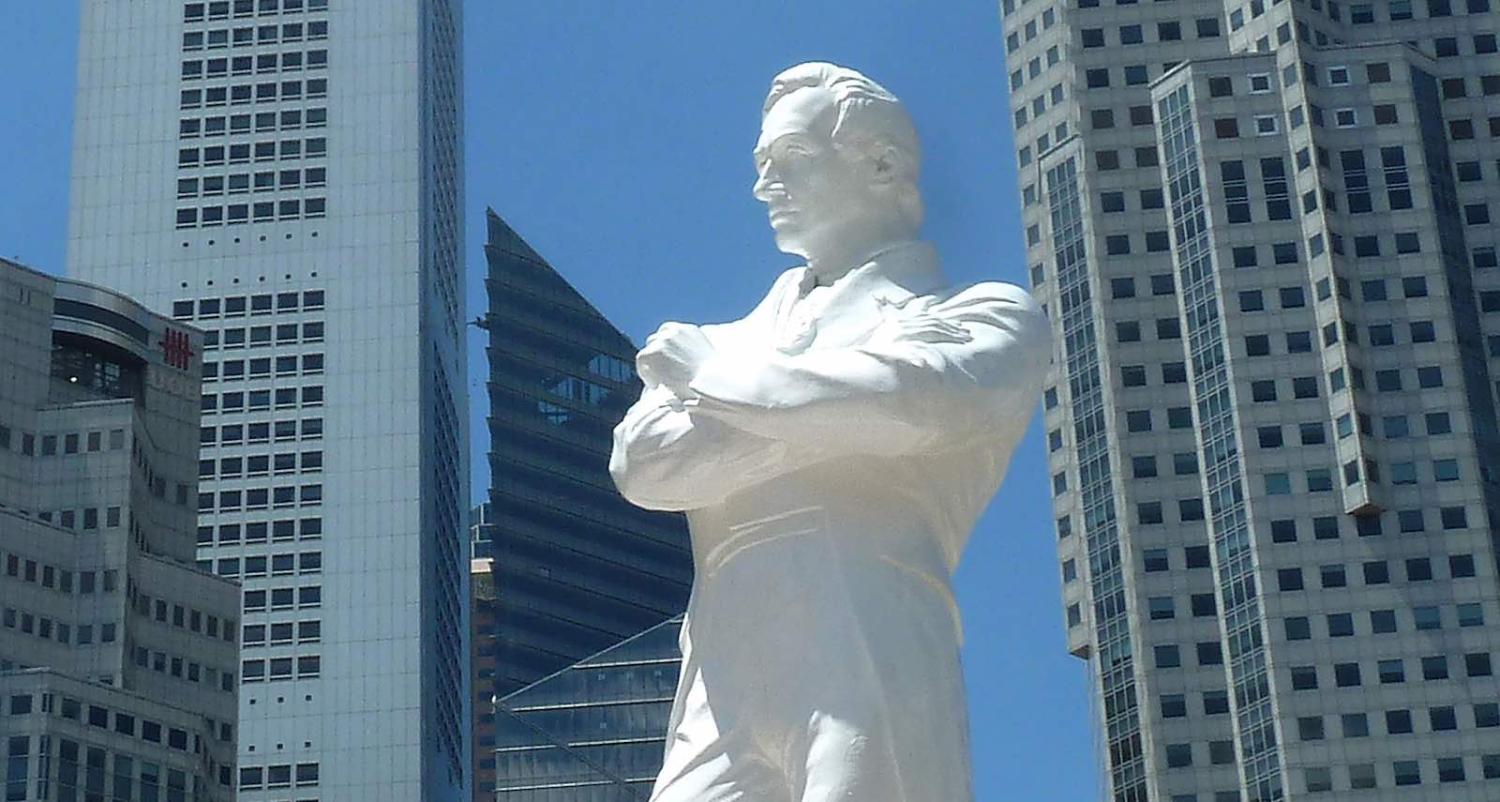 A statue of Sir Stamford Raffles marks the spot where he is believed to have first landed in 1819, on the north bank of the Singapore River (Photo: Jim Dyson/Getty Images)
Published 12 Feb 2020     Follow @stephendziedzic

If you take an early evening stroll through Singapore’s old civic heart, the ghosts of Empire loom all around.

You might start your walk at the celebrated Raffles Hotel, where – as tourists are endlessly reminded – English literary giants like Rudyard Kipling and Noel Coward once languidly sipped cocktails.

From there, it’s only a short walk to the manicured green expanse of the Padang, where men decked out in whites still play cricket under the imperious dome of the old Supreme Court and the vast neoclassical colonnade of colonial Singapore’s City Hall.

These stone edifices are now dwarfed by the shimmering towers of steel and glass across the river in the Central Business District. While the colonial district is well-visited and immaculately preserved (the old Supreme Court and City Hall were brilliantly fused into one building, which now houses the National Gallery), the currents of power and capital which animate contemporary Singapore no longer course through here, but instead run through the luxury malls on Orchard Road, the corporate boardrooms perched on skyscraper eyries, and the immaculate offices where Singapore’s politicians and civil servants hammer out policy decisions.

Singapore’s first prime minister, Lee Kuan Yew, said that before the British arrived, “there was no organised human society in Singapore, unless a fishing village can be called a society”.

Still, the grand old buildings are hard to ignore, and no one here disputes that Britain’s legacy runs much deeper than its architectural endowment. Last year, Singapore marked two centuries since Stamford Raffles and William Farquhar arrived to establish a trading station for the British East India Company. And, unsurprisingly, Singaporeans are still wrestling with exactly how the city-state was shaped by Britain and how this history guides its trajectory today.

The People’s Action Party (PAP), which has ruled Singapore since independence in 1965, has no interest in tearing down statues of Raffles or his successors. In 1969, Singapore’s first prime minister, Lee Kuan Yew, said that before the British arrived, “there was no organised human society in Singapore, unless a fishing village can be called a society”.

Of course, he conceded, Britain’s list of sins was long. The colonial regime was racist. It promoted opium smoking, which ravaged countless lives in Singapore. Unemployment levels were high, and working conditions were often horrendous. And in the Second World War, Britain utterly failed to defend the colony against invasion by Japan, which subsequently killed countless Singaporeans.

And yet, and yet. “Unlike other colonial masters in Southeast Asia”, Koh wrote in the Straits Times, “the British did leave us with a positive legacy”.

“This includes the English language, the free port, free trade, open economy, good infrastructure, the rule of law, a good civil service and police force, town planning, public hygiene and modern medicine, a belief in science and modernity and an appreciation of nature and natural history.”

This is a familiar list. Many PAP leaders argue that British rule, for all its flaws, laid the foundations for the city-state’s remarkable economic success today. They also believe some former British colonies squandered the legacy left to them by their erstwhile rulers, rather than building and improving on it, as Singapore has.

But some Singaporean academics and writers, intent on challenging this orthodoxy, argue that not only was the colonial regime more rapacious than usually portrayed, but it also left a poisonous intellectual legacy which reinforces racial discrimination and cements authoritarian politics in Singapore today.

One of the most well-known critics is Singaporean historian Thum Ping Tjin, who has argued that the PAP inherited the deeply illiberal instincts of the colonial government. Both the British and the PAP fostered a mythological image of a meritocratic Singapore “beset by potential enemies within and without.” The PAP’s restrictions on protest and free speech, and the steady growth of executive power, are simply an extension of this ideology. Even Singapore’s laws prohibiting sex between men (no longer enforced, but still on the books) are a colonial hangover.

“In some important respects Singapore remains fundamentally colonial in nature,” Thum Ping Tjin wrote. “While the country is physically independent, decolonisation of our intellectual and psychological sphere has yet to take place.”

The debate over the colonial period also intersects with an even more fraught subject – racial privilege. Under the British, there was a clear racial hierarchy in Singapore, with Europeans at the top, Chinese merchants underneath, and Malay Singaporeans relegated to the margins. The city was also divided into separate districts for different races (Little India is still a hub for many Bangladeshi and Indian migrant workers today). Liberal critics argue these divisions and hierarchies are now imprinted – unconsciously, but ineradicably – on the minds of many Singaporeans.

Recently the young Singaporean writer Gregory Ng Yong He has attacked upscale “colonial chic” restaurants and clubs across the city, arguing they “venerate the aesthetics of a colonial era tightly yoked to the disenfranchisement and erasure of Malay people.”

“If Singaporeans revere colonialism, then they celebrate an ideology based on dangerous rhetoric about the Malay community’s racial and cultural shortcomings, which is still mobilised today to explain contemporary Malay socioeconomic and political disenfranchisement,” he wrote.

And while many Singaporeans tread carefully around the subject of race, public controversies can still erupt with sudden ferocity. Last year, two Indian Singaporeans created headlines (and were warned by police) after they responded to a brownface advertising scandal by releasing an online rap video mocking Chinese Singaporeans and accusing them of racism towards minorities.

Of course, this isn’t happening in isolation. Singaporean elites are keenly aware that many developed countries are currently grappling with increasingly rancorous debates about race, identity, and privilege, and they are anxious about the way such language could bleed into local discourse.

When asked about the rap video, Singapore’s Home Affairs and Law Minister K Shanmugam warned against the incursion of aggressive identity politics, seeming to frame it as a foreign import.

“If everyone starts discussing race and religion in the way [the rappers] did, then you will in fact get more racism, not less,” he told a gaggle of reporters.

“They have used the language of resistance in America, but we thankfully are in a very different situation.”

Shanmugam added that if the state allowed racial abuse to be aired, then Singapore’s ethnic minority groups would also be exposed to hatred.

One thing seems clear – Stamford Raffles still casts a long shadow over the island state. The debate over his legacy may sit at the margins of public life for now, but it shows no signs of fading away. Even if Singapore is done with colonialism, colonialism is not yet done with Singapore.

Proposed changes to a school textbook have sparked a public debate that goes to the heart of national identity.
Alexandre Dayant 7 May 2018 16:45

Links and stories from the aid and development sector.
Sara E Davies, Sophie Harman 1 May 2020 06:00

A winding back of hard-won women’s rights in Europe has implications for us all.