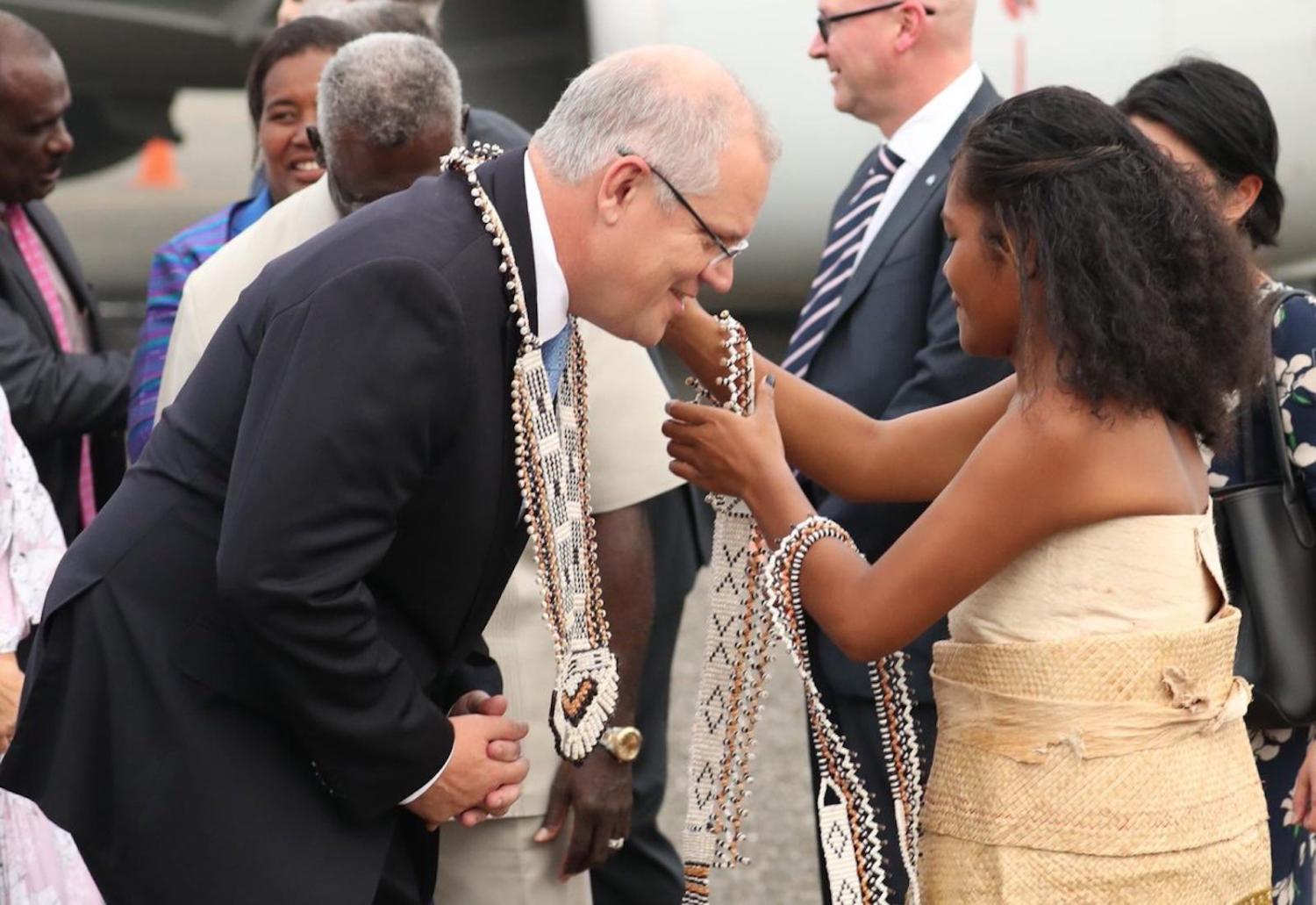 Scott and Jenny Morrison stepped out into the humidity of Solomon Islands historic Henderson airport earlier this week to a legacy Pacific welcome, a mix of indigenous traditions and colonial pomp.

Being decked in finely wrought shell necklaces by young island maidens before inspecting the tiny if gallant guard of honour of the Royal Solomon Islands Police Force, their white ceremonial uniforms dazzling in the tropical light, would not have fazed either of the Morrisons.

Solomon Islands is one of the closest members of our Pacific family. After serious civil unrest, Australia and other regional friends helped reestablish law and order through the RAMSI operation that has seen their country restore their democracy and get their debt under control. pic.twitter.com/8FgCx3gqIb

Veterans over the past couple of decades of many church-related trips to the Pacific (mostly Fiji), the Morrisons, frequently privileged to be house guests of their Pacific Island hosts, are more than familiar with the legendary and very genuine warmth of island hospitality. Such intimate exposure to the ebb and flow of ordinary Pacific life over nearly half a lifetime, also renders Australia’s 30th Prime Minister somewhat unique.

Australia’s constitution while epically failing to recognise our own first nation’s people, more than a century ago made specific provision for “the relations of the Commonwealth with the islands of the Pacific”.

Yet nearly 120 year’s later, it is safe to say that Morrison is likely the first prime minister since Federation to bring to the office such personal insight and real affinity for our island neighbours. When Scott Morrison speaks of the Pacific being family he actually means it.

In truth, despite our shared destiny, Australia’s relations with the region have always been a hot mess. Waxing in times of natural disasters – often dangerously late in times of man-made ones – and waning whenever the mess has been cleaned up or the heat appears to be off.

Climate change, cyber vulnerabilities and the juggernaut that is China, to name just three of the more current threats to stability in the region, mean Australia, let alone the Pacific, can no longer afford such an ad hoc, inconsistent approach.

It would seem that as is usual in the Pacific, in the least predictable way, the stars have aligned to create a long overdue opportunity for a new, more mature era in Australia’s relations with the region.

Indeed, the original step-up in engagement with the Pacific was conceived some time before Morrison’s ascendancy, the result of some long-overdue strategic analysis by the Department of Foreign Affairs and Trade’s Pacific division. The aim: to design a more dynamic and strategic set of goals for our relationship with the region that could move beyond Julie Bishop’s tired mantra of a “prosperous and stable” region.

Elegantly simple in its priorities of stronger people to people relationships, and enhanced economic and security partnerships, like most things Pacific, it received scant media attention in Australia until Morrison took office, began espousing his love of the Pacific, and announced moves to turbo-charge the step-up.

For as DFAT was daring to be more ambitious in its thinking, so too had China’s increasingly savvy and aggressive push into the region caught the attention of Australia’s intelligence agencies and the Department of Defence.

Just a year shy of its unveiling, a considerable expansion of the Pacific step-up was announced. Morrison declared it a “new chapter in our relations with our Pacific family”. The fruits of this leap of faith can be seen in the latest budget with aid to the Pacific reaching a record $1.3 billion this year, despite the continued cuts to the overall aid budget.

Yet one of the most significant initiatives of Morrison’s step-up is not even traditional aid. The uncapping of the Pacific Labour Scheme and its expansion to all Pacific countries will literally be a game changer for many in the island nations.

The creation of the new Office of National Intelligence (ONI) and appointment of Nick Warner as its inaugural Director-General last year means the Prime Minister now receives his security briefings from an agency run by an official who also knows the Pacific well.

Warner has held two of the most challenging and delicate roles for an Australian bureaucrat in the region. The first from 1999–2003 as High Commissioner to Papua New Guinea in the dying days of the Bougainville crisis and early days of a fragile peace process. The second as the inaugural Special Coordinator in 2003–2004 of what remains Australia’s most ambitious, expensive and successful foreign policy initiative to date, the Australian-led and funded Regional Assistance Mission to Solomon Islands.

Leading a 2000-strong intervention force in mid-2003 into what essentially was a failing state and literally unchartered territory for Australian policy makers, Warner demonstrated an impeccable instinct for dealing with Solomons’ less than predicable personalities including armed rebel leaders, a great capacity for building trust and collaboration with the heads of other agencies involved in the mission, particularly the AFP which presumably helped support his willingness to take a calculated risk to get the job done. But most importantly for the success of the mission, Warner has the human touch. Solomon Islanders, the majority of whom possess built-in BS detectors, saw instantly that he was genuine and got behind the effort to restore the rule of law.

It would seem that as is usual in the Pacific, in the least predictable way, the stars have aligned to create a long overdue opportunity for a new, more mature era in Australia’s relations with the region and with it the chance on all sides to steady a course that reflects the mutual benefits in the long term of working together.

All such opportunities require leadership and compromise. Both Morrison and Opposition leader Anthony Albanese have got off to a good start appointing credible MPs to their portfolios of International Development and the Pacific with both men also having some linkage and responsibility for defence. It would behove both the new minister, Alex Hawke and his Opposition counterpart, Pat Conroy to cultivate an aggressively bilateral approach that ensures real development outcomes in health, education and governance aren’t completely subverted to the geopolitical drivers of the step up.

Concrete action on climate change is not negotiable for many of the Pacific states who were at least encouraged that Australia was willing to sign on to the Pacific Islands Forum’s Boe Declaration last year reaffirming “that climate change remains the single greatest threat to the livelihoods, security and wellbeing of the peoples of the Pacific and our commitment to progress the implementation of the Paris Agreement”.

The scourge of indefinite detention of our unwanted refugees on Manus and Nauru and the leverage this has allowed someone such as former Papua New Guinea prime minister Peter O’Neil over Australia’s development programs in the country needs to end. Morrison should certainly be seeking divine intervention when it comes to dealing with the long-term challenges PNG faces, but in a region that runs on personal relationships it has to count that our guy gets the connection.

The anti-communist purge in Indonesia in the 1960s is retold in a compelling examination of US Cold War policy.
Alexandre Dayant 22 Jan 2020 11:00

Weekend catch-up: PMs in PNG and Pakistan, DFAT at 30, the NBN and more

The future of Polish politics, a new Defence Secretary, the North Korean travel ban and more.