In Vietnam, Castro receives his dues

Even now the old comrade commands respect in Vietnam.

Vietnam is to hold a national day of mourning for Fidel Castro this Sunday, 4 December. Even now the old comrade commands respect in Vietnam.

The country has been cultivating a varied network of foreign relationships in recent years, lately strengthening its ties with India and dismantling the last hurdles to normalisation with the US. But old friends are not forgotten, and Castro's death has provoked an unusual outpouring of grief for an increasingly market-driven nation.

The current prime minister, president and general secretary of Vietnam are all old enough to remember when Cuba sent aid to Vietnam, and the communist world was still united against the West.

Cuba and (North) Vietnam established diplomatic relations in 1960, and Castro visited Vietnam three times. His famed 1973 wartime visit can be read about here. He even apparently said in 1973 that ‘for Vietnam, Cuba is willing to donate blood’. This wasn't entirely accurate, as they sold it rather than donating it; a Wall Street Journal article quotes a 1967 report from the InterAmerican Human Rights Commission saying that the blood of Cuban political dissidents was extracted before they were shot. The blood was then sold to Vietnam at ‘fifty dollars per pint with the dual purpose of obtaining hard currency in dollars and contributing to the Vietcong communist aggression’. A lengthier account can be read here.

Cubans also apparently assisted in the brutal interrogation of US POWs in Vietnam. Altogether this paints a less benign picture of Cuba than that of its famed doctors, operating out of caves in Laos.

There are plenty of remnants of the old Soviet friendship in Vietnam, and a good number of Russian speakers. Anomalies such as Czech beer halls are common (conversely, Vietnamese food in Prague is reportedly outstanding). But there is less of an obvious Cuban influence outside of a hospital in the city centre on Hai Ba Trung street. I also recall a Che Guevara/Cuban cafe on Hao Nam street in Hanoi’s Dong Da (though in Vietnam, if you can think of a theme, there’s a cafe).

And yet, come Sunday, ‘all institutions across Vietnam (and representative agencies of the country in foreign nations) will fly flags at half-mast and wear mourning bands. Public entertainment activities will also be restricted, officials said in a statement.

The last such public mourning was for General Vo Nguyen Giap, architect of the Dien Bien Phu defeat of the French, who remained a hero in Vietnam despite being somewhat sidelined during the American War. Giap died in October 2013 aged 102, and received a two-day state funeral.

‘Fidel Castro was a great and close friend, a comrade and brother of the Party, State leaders and people of Vietnam during the past 50 years,’ wrote President Tran Dai Quang in the condolences book at the Cuban embassy. All three members of the troika, president, prime minister and Communist Party general secretary, were there. All week, plenty of Vietnamese have laid wreaths at the gates of the embassy, where pictures of a younger Castro are on show out the front.

Vietnamese Journalist and activist Doan Trang, who was prevented from meeting with Obama in May, has written a piece at Vietnam Right Now as a counter to the prevailing narrative of Castro as hero, pointing out that many find the national day of mourning inconvenient (especially for those forced to unexpectedly cancel their weddings) and that it may not even be technically legal for a foreign head of state to receive such an honour.

And for democracy activists it is galling. ‘It was their defiance, and even humiliation, of the United States at the height of its powers, that endeared them (Castro and Ho Chi Minh) to the global Left, regardless of the incalculable sacrifices demanded of their own people,’ Trang wrote.

[Fidel Castro] turned out to be a far more stubborn ideologue than the more pragmatic heirs of Ho....Both, however, resisted any hint of political liberalisation.... It is Castro’s repression of freedom that so antagonises his Vietnamese critics.

Vietnam's rapprochement with the US has taken a long time, but it also began a long time ago. Bill Clinton, George W Bush and Barack Obama have all visited, and trade is high (even the US weapons sales ban has been lifted). Vietnam began opening up its economy in 1986 onwards; since then, its view of the world has been one of engagement. The Communist Party keeps in contact with other parties across the world, but ideology remains mostly focused inward (aspects of the relationship with China, and to a lesser extent Laos, are obvious exceptions).

But still, Vietnam does not like to forget its friends, especially those it believes assisted the struggle for national liberation. So even now, with a growing market economy, one of the last old guard Marxist-Leninists is getting his dues. 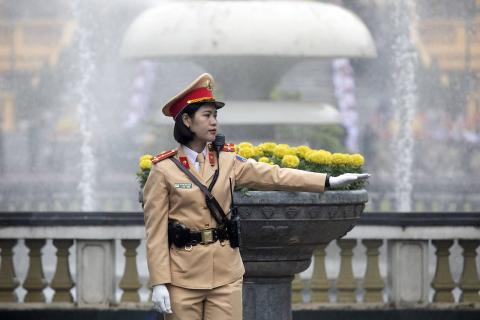 Show Comments
Previous Article
Quick comment: Rodger Shanahan on Neil Prakash
Next Article
Is there a global wave of populism?