Violence in Papua could get worse

A province now awash in cash has spurred a migrant influx and given new sources of income to the independence movement. 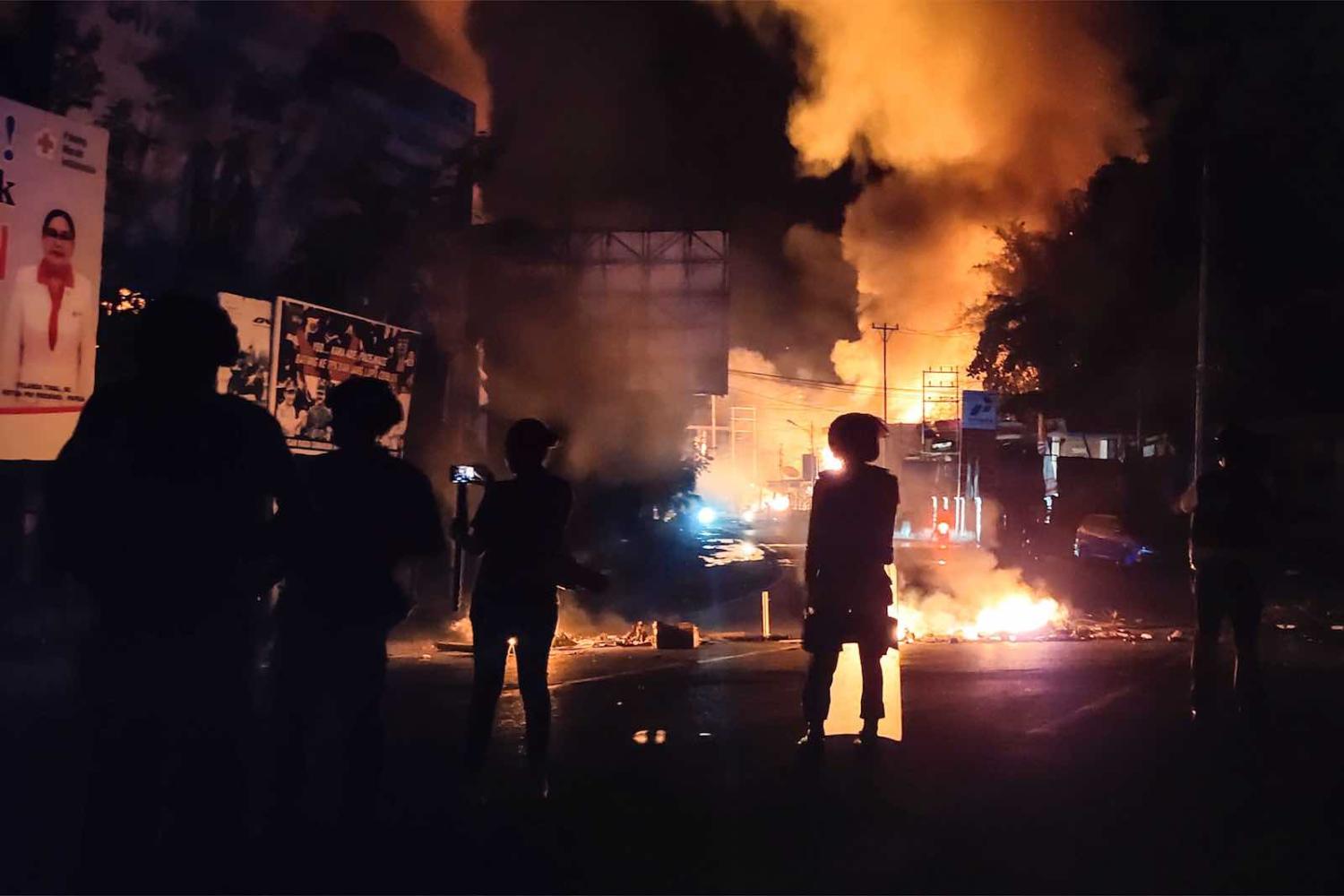 Violence has swept across Indonesian Papua in the last six weeks, starting with racist taunts against Papuan students in East Java, and moving back to Papua where protests against racism turned into larger pro-independence demonstrations.

On 28 August, police opened fire on demonstrators in Deiyai, a remote district in the central highlands, after an Indonesian soldier was killed by an arrow. Eight Papuans died from gunfire. The next day in Jayapura, a larger demonstration, organised by the pro-independence West Papua National Committee (KNPB), turned into a riot, with Papuans setting fire to government buildings and migrant-owned shops. Waves of arrests followed.

On 23 September, news of racist remarks by a non-Papuan teacher in Wamena – which police say never happened – spread quickly, and Papuan students turned out in the streets, setting fire to migrant property. When it was over, more than 30 people were dead, most of them migrants burned to death in their shophouses. Sporadic violence has continued elsewhere in the central highlands, reportedly encouraged by pro-independence groups.

One, aimed largely at an international audience, is the narrative of Papuan oppression by the Indonesian state, focusing on the brutality of security forces; the history of racism and discrimination; the long list of unresolved human rights violations; and the marginalisation of indigenous Papuans in their own land as they are flooded by migrants from elsewhere in Indonesia.

The second, aimed at Indonesian audience, is a story of hard-working migrants who saw family members burned alive on 23 September in Wamena, the largest town in the central highlands, and homes and businesses destroyed by rampaging Papuan mobs. Television news programs, with slow mournful music in the background, showed long lines of Indonesians boarding military transport planes for evacuation.

Both of these narratives are true, but they don’t intersect. The domestic audience by and large has little appreciation of the sources of Papuan resentment or of the anger generated, for example, by the difference between the speed with which police documented property destroyed by Papuan mobs on 29 August in Jayapura, and their slowness to acknowledge Papuan deaths at the hands of security forces in Deiyai a day earlier.

This is the story of how Papua over the last two decades has become a province awash in cash in a way that has both spurred the influx of migrants and provided new sources of income for the independence movement, especially in the central highlands.

Likewise, the international audience hears little about intimidation and violence by independence supporters against migrants. Those killed were mostly from West Sumatra and South Sulawesi; nine Papuans also died, mostly stabbed by migrants trying to fend off the mob. Much of the international reporting has implied that the victims were all Papuan.

Independence leaders claimed after the Jayapura violence that they had no problems with migrants except those working as informers for the security apparatus. In fact, the independence movement has always had an anti-migrant dimension. The origin of this hostility lies in the Suharto-era transmigration program that brought thousands of Javanese and other Indonesians to Papua, in the interests of both security and economic development, and often settled them on customary Papuan land with no consultation or compensation.

The situation today has changed, however, and this leads to a third narrative that is missing from the other two but that links them together. This is the story of how Papua over the last two decades has become a province awash in cash in a way that has both spurred the influx of migrants and provided new sources of income for the independence movement, especially in the central highlands.

The money comes in part from funds made available under the Special Autonomy Law of 2001, and in part from programs at the subdistrict and village level designed to provide aid for education and local infrastructure development. The more people, the more funds, whether one is counting students in school or household heads in a village. Papuan elites, particularly in the least accessible parts of the highlands, accordingly oversaw the creation of hundreds of new villages, subdistricts, and districts, generally based on totally fictitious population data that no one in Jakarta had the time, resources, or incentive to check.

Tolikara is one highland kabupaten created in 2002. At the time, it had four subdistricts and ten villages. Today it has 46 subdistricts and 545 villages. In the 2019 election, the number of votes cast for President Joko (Jokowi) Widodo was 230,765, when according to the National Bureau of Statistics, the total population – men, women, and children – was just under 140,000. The problem is that the data used for electoral rolls and for government programs is not from the Bureau; it is rather from the civil registration office of Home Affairs, which is much more open to manipulation by local officials.

The fake population data has created a vast network of absentee government, but those who are in charge on paper are happy to spend the money rolling in on goods and services provided by the migrants. The government did not send thousands of Indonesians to Wamena over the last 20 years. They came on their own, knowing there was money to be made. Anecdotal evidence suggests that some of this largesse has also made its way to the independence movement from sympathetic elected officials, enabling KNPB to grow into the dominant organisation it has become and the Organisasi Papua Merdeka (OPM) to find money for bullets and guns.

At one point, intelligence agencies were driving the administrative fragmentation, seeing it as one way of fracturing the independence movement and fostering local rivalries. But as astute highland politicians have used the combination of money and political power to wrest control of Papua from the traditional coastal elite, exactly the opposite has happened. The West Papua National Committee, dominated by highlanders, has become the largest independence organisation in Papua, and pro-independence sentiment is stronger than ever.

Some independence supporters accuse Jakarta of deliberately hiding the true number of migrants to obscure the true scale of indigenous marginalisation. For example, after the violence in Wamena, one leading pro-independence pastor wrote1:

The indigenous people of West Papua have been friends for 58 years with migrants across the land of Papua from Sorong to Merauke. So it must be asked, migrants from what ethnic group and what areas have become the enemies of indigenous Papuans? We must have data so we KNOW who are the migrants that live in the Melanesian land of West Papua who carry swords and knives and sharp weapons to kill indigenous Papuans who own the land.

If the Jokowi government was serious about addressing Papuan ills, it would try to do an accurate headcount, in a way that would document the true number of migrants, as the Papuans demand, but would also expose the amount of population inflation that has taken place in local statistics, especially in the highlands. The government has an opportunity with next year’s national census, but it would have to move quickly to get extra resources, training, and personnel into place, and as of early October, nothing was happening.

In the meantime, the Jokowi government shows no sign that it appreciates the danger of growing communal tensions. More arson attacks against migrant property took place in Oksibil, the capital of Pegunungan Bintang in the highlands on 26 September, and two migrants from South Sulawesi were killed near the Puncak airport on 28 September. As most of the victims are Muslim, the attacks are attracting the attention of Muslim activists outside Papua, much as an earlier round of violence in Tolikara did in July 2015. This violence could spread beyond Papua.

Preventive policing has been totally absent, a factor that may have led to the sacking of the provincial police chief on 27 September and his replacement by the most senior indigenous Papuan in the police, Paulus Waterpauw. The police have devoted more time to mass round-ups of demonstrators than to trying to head off migrant-indigenous clashes, adding insult to injury by forcing those rounded up to listen to “patriotic” Indonesian songs while in detention. They have failed to undertake a clear accounting of the number of Papuans killed, by whom, and under what circumstances.

There has been no serious review of standard operating procedures in dealing with unrest, although the current national police chief, Tito Karnavian, made a number of recommendations in a book about “lessons learned” after his tenure as police chief in Papua from 2012 to 2014. They included the need for accurate intelligence to assess the potential for problems, the drawing up of security plans based on worst-case scenarios, immediate palliative measures when casualties are involved, and constant evaluation meetings to assess and address the impact.2 None of these measures appear to have been adopted by his successors.

Jokowi announced on 30 September that he was willing to talk to pro-referendum Papuans. That will be played as a major victory for the independence movement and proof that only violence produces concessions. He should be focusing instead on the situation on the ground:

Jokowi has rested for too long on his frequent visits to Papua and his infrastructure projects as proof that he is addressing Papua’s problems. Thus far, he has shown little interest in security issues, believing economic development would make the political problem go away.

It won’t, nor will New Order–style rhetoric about Indonesian unity and staged reconciliation ceremonies help. The very different narratives about Papuan violence show the gravity of the problem. It is time for a serious course correction.

1 Socratez Yoman, “We Must All be Vigilant in Preventing Horizontal Conflict between Indigenous Papuans and Migrants”, 28 September 2019

These week's links also include asylum seeker news from Nauru, shoring up the borders in Bangladesh, and climate change refugees from PNG’s Carteret Islands.
7 Feb 2018 14:30

Links and stories from around the Pacific by The Interpreter team.
Andrew Leigh 23 Dec 2021 11:00

A pandemic is bad. But humanity is inviting greater dangers by toying with technologies that could end the species.