Only the EU is in a position to pick up the banner of the Western world. 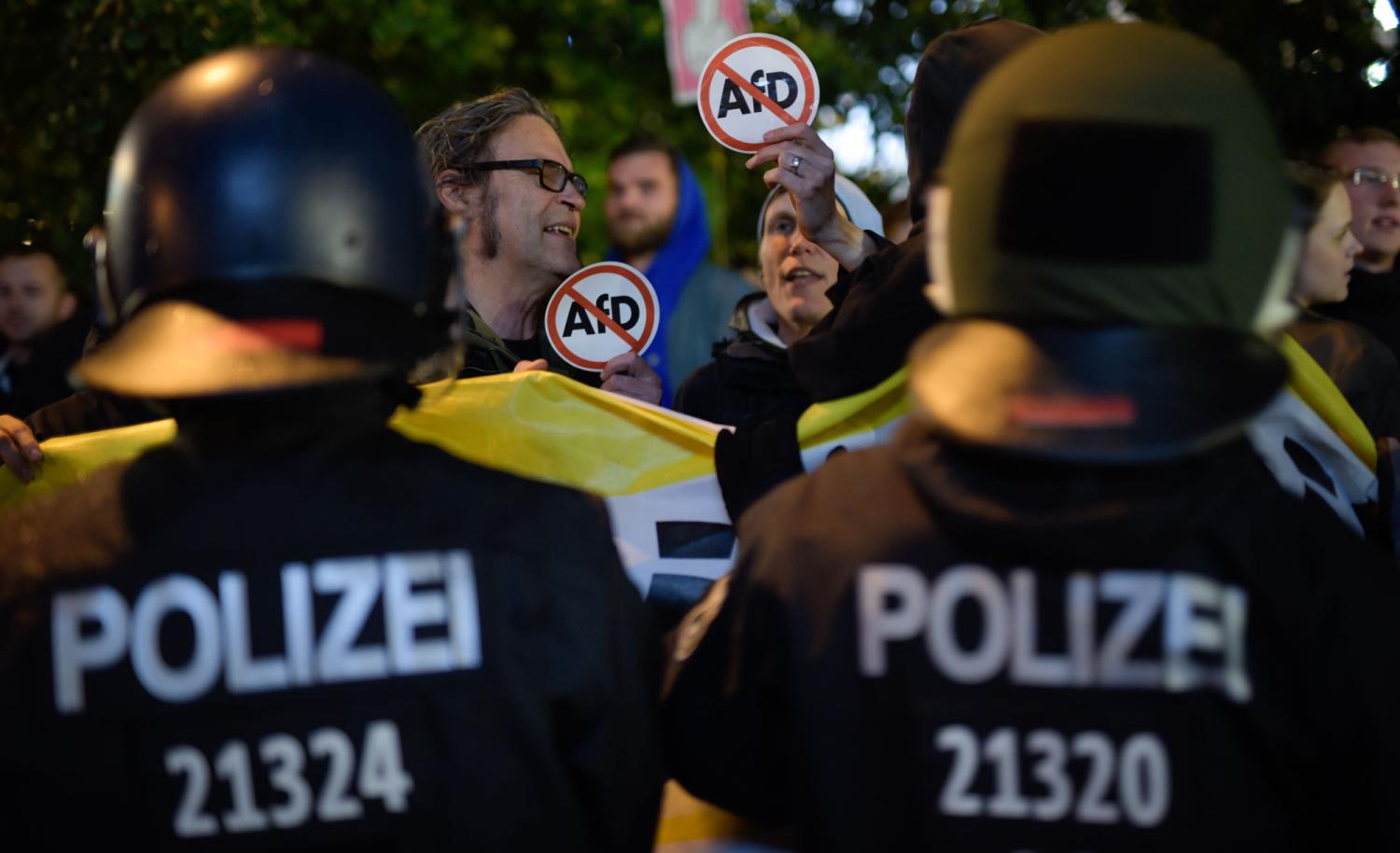 Opponents of the Alternative for Germany (AfD) protest after the German federal elections. Photo by Jens Schlueter/Getty Images
Published 26 Sep 2017

The 87% of Germans who did not vote for the ‘Alternative für Deutschland’, along with their elected leaders in government and opposition, now have their work cut out to stop the AfD cold so as to avoid any shadows escaping from the box of a permanently sealed past. First impressions on election eve are that everyone in Germany fully understands this. Thus the chances are good that they will succeed. That is important for Germany and Europe but also the rest of the world.

After Brexit and Trump, the mantle of fighting nationalistic illiberalism has passed to the old continent. To expect that ‘Saint Angela’ could and would carry this burden alone was unrealistic. Germany is far from being a superpower, not only by size and population but also by its own will. If it is to be anyone, only the EU is in a position to pick up the banner of a Western world in which migration is still more promise than menace, where humanitarian principles count as much as border security, and where the fragile health of our planet is an overriding issue.

Notwithstanding illiberal black sheep such as the governments of Poland and Hungary, the EU has a unique chance to rise to this immense challenge. All around Europe, economies are picking up. Even Greece has recently seen its Government bonds sell briskly and at dramatically lower price for the borrower.

At this point a quick look back at the German election is necessary. Statistics show that it was not so much the really poor who voted for AfD. Rather, it was those motivated by an overriding fear of the recent wave of immigrants and their effect on their country’s future. Furthermore, the percentage of votes for the AfD was much higher in the old German Democratic Republic than in western Germany, underscoring the point that a civil society, destroyed by totalitarian government, takes decades to recover.

Nevertheless, an improving economic performance is of course crucial if the EU wants to lead anything. It's a point the French President has accepted as a sine qua non of any pretense that the Berlin-Paris axis can power the EU’s resurgence. Interestingly, Angela Merkel’s loss in political reputation following the poor showing of the governing coalition she led over the last four years, coupled by early indications that Emmanuel Macron’s overhaul of French labour regulation just might come through largely unscathed by internal opposition, will probably lead to reinforced unity within the EU, insofar as Germany and France will work together again as equals.

The potential pitfalls are numerous. To just cite the most immediate and potentially most dangerous European flash point is to look a week ahead to the Catalonian referendum. It is to be hoped that new European cool will prevail over old-time Iberian machismo. If it is going to be solved at all, the Catalan crisis can only be solved over the medium term and under the broad umbrella of European autonomous regions across national borders. This, incidentally, is not political pie in the sky but the de-facto reality, as anyone can experience when taking a train across borders between Holland, Belgium, Germany, France, Switzerland and Italy.

If and when the EU is in shape ‘to lead the Western world’, all assistance and help from other parts of the globe will not only be welcome but urgently needed, at least as long as the Trump interlude lasts. To state that the 21st century will be progressively ‘easternised’ is undoubtedly true, but implies new global responsibilities for Western-style democracies, on several fronts: to effectively secure borders but also to accept a fair share of Syrian war refugees; to serve as an example of how continued American presence and growing Chinese assertiveness in the Indo-Pacific can be accommodated; and to show how the Trans Pacific Partnership trade deal (minus the US) can be linked with the EU not only as an economic but also an urgent political necessity.

Legal mechanisms, while not definitive, have compelled the claimants to examine their position and communicate them.
Mohib Iqbal 11 Jul 2018 13:00

Burdens and threats at NATO summit

Donald Trump’s theatrics about military spending will distract the alliance from a focus on pressing threats.
Kelsey Munro 3 Dec 2019 09:00

Renting influence: China in the Pacific

In Episode 15 of the Rules Based Audio podcast, we explore China’s interests, influence and intentions in the Pacific.