Any change to Japan’s constitutional “peace clause” needs securing a two-thirds majority in both houses of the Diet. 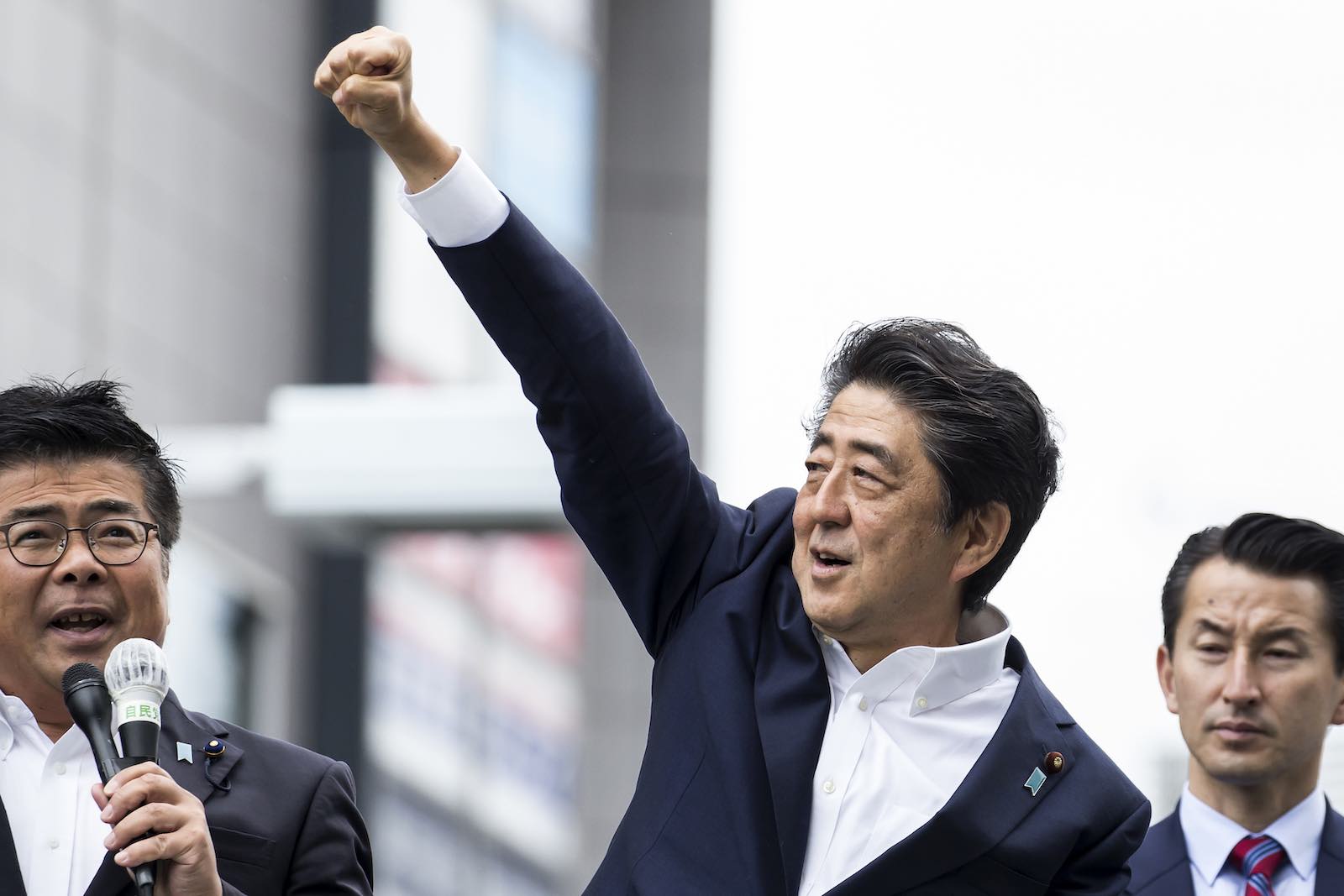 No other Japanese leader has spent as much political capital as Shinzo Abe on this politically controversial project to amend the constitution (Photo: Tomohiro Ohsumi/Getty)
Published 17 Jul 2019 13:00   0 Comments

Japan’s upper house election is set to be held this weekend but has attracted little media attention internationally. Doubtless this is because the House of Councillors is a less consequential body of Japan’s parliament, the national Diet, than the lower house, the House of Representatives, where governments are formed on the basis of a party’s majority.

The proposal to amend the constitution is not new, as many other Japanese political leaders before Abe have raised the prospects of change. But their ideas and proposals did not get very far. The constitution has remained untouched for more than 70 years since it came into force in 1947. Partly this is because of a lack of appetite for revision among the general public, and partly it is because the process itself is extremely difficult.

Any constitutional amendment has to be first passed by a two-thirds yes vote in both houses of the Diet. The amendment must then be endorsed by a national referendum with a simple majority of voters.

Several revisions are proposed for the constitution but the most debated and controversial is to Article IX ­– the “peace clause”. It presently reads:

Aspiring sincerely to an international peace based on justice and order, the Japanese people forever renounce war as a sovereign right of the nation and the threat or use of force as a means of settling international disputes.
In order to accomplish the aim of the preceding paragraph, land, sea and air forces, as well as other war potential, will never be maintained. The right of belligerency of the state will not be recognised.

Under this article Japan renounces war and prohibits itself from maintaining any “war potential”. However, many, especially within the ruling Liberal Democratic Party, have argued this condition was imposed by the occupying authorities when Japan was not a “free” nation.

The enormity of the issue can be gauged by the fact that the Reischauer Institute of Japanese Studies at Harvard University commenced a project in 2005 to study the various proposals for constitutional amendment ­– and the project is still going.

No other Japanese leader has spent as much political capital as Abe on this politically controversial project. He said last year he wanted to revise the constitution by 2020, but he has cleverly left this task in the hands of his party, so that he is not made responsible and forced to resign in case the proposed amendment does not mature.

His party has approved Abe’s proposal to amend the constitution and is ready to bring a bill in parliament. However, the bill is yet to be presented and Abe’s hope is to do so following the upper house elections.

Abe understands that rewriting Article IX and making Japan a “normal nation” by establishing a full military force is impossible. Pacifist sentiments run deep in Japan’s national psyche and even his own coalition partner, the Komeito, would not endorse such a proposal. So Abe has proposed to add a new clause in this article that would affirm the status of Japan’s Self Defence Force. In Abe’s view, recognising the existence of the SDF explicitly legitimises its current role.

But a big question is whether Abe’s LDP and his ruling coalition partner, Komeito, and other political allies can secure enough seats in the upper house to introduce and carry out an amendment to the constitution. (Abe’s coalition and allies have already a two-thirds majority in the lower house.)

The odds are against Abe. That is why he has set a low hurdle for himself in this election. He wants to secure a majority in the upper house by winning at least 53 seats, which added to the 70 uncontested seats will bring the total to 123 in a 245-member house. Any additional seats his party gains will be regarded as icing on the cake.

Abe has deliberately set his target low. In Japan’s 12-yearly cyclic calendar, 2019 is the Year of the Boar, characterised by some unique features in Japanese politics. In the Year of the Boar, Japan typically conducts a quadrennial unified nationwide local election for thousands of local assembly members and heads of local governments a few months prior to the upper house elections.

Fortunately for Abe, his party performed relatively well this year in April’s local elections. But the LDP lost two crucial by-elections for the lower house in the same month, which Abe called  “disappointing” before observing that “we have to brace ourselves for the Upper House election”.

Public opinion on constitutional amendment is divided and remains ambivalent. In a survey conducted in 2018, 29% supported change, 27% opposed, while 39% were undecided and five per cent did not respond.

Other issues will also come into play. The Abe government has decided to raise the consumption tax from the current rate of eight per cent to 10% from October this year. Tax hikes are never popular and opposition parties may capitalise on this issue as they are running joint candidates in several crucial seats to fight with the LDP head on.

There are also issues of lingering alleged corrupt practices involving Abe and recent controversy relating to insufficient pension payments has caused a slight decrease in the approval rating for Abe’s cabinet. But Abe and his party remain miles ahead of the largest opposition, the Constitutional Democratic Party.

Returning a two-thirds majority in the upper house seems an uphill task. But elections do spring surprises. If Abe and his allies win a two-thirds majority in both houses, then the Prime Minister will put his foot down to accomplish his long-cherished desire of amending the constitution. This election has the potential to make or break Abe’s dream project.

Show Comments
Previous Article
Pacific links: China challenge, an “Elevation”, power lifting, more
Next Article
Australia’s alliance with the US is defined by more than one President