After the attack: Supporting victims of terrorism in Indonesia

The country's revised anti-terrorism law is a step in the right direction, but it needs to go much further. 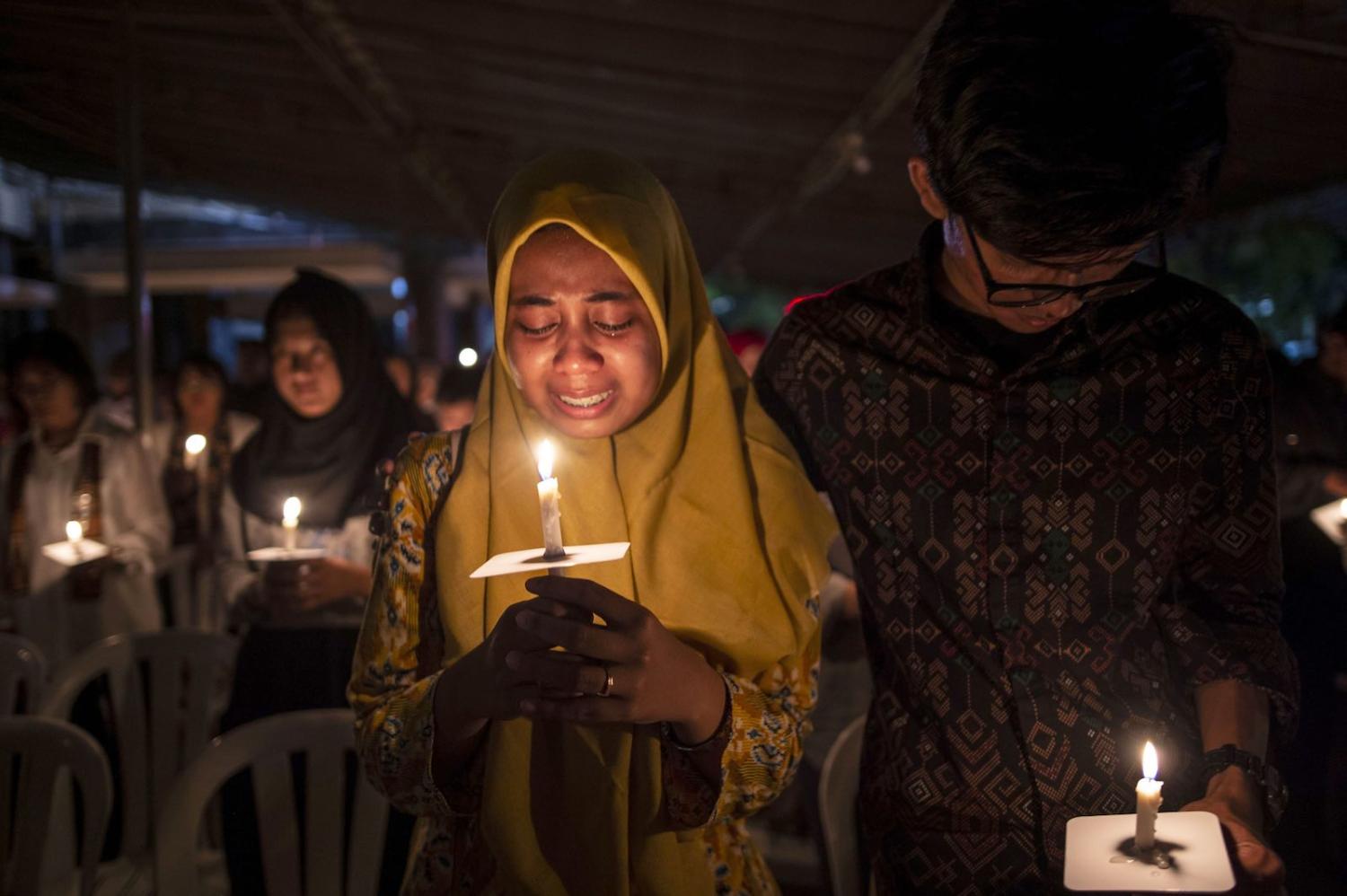 Tears during a candlelight vigil to remember the victims of the 2018 Surabaya suicide bombings (Photo: Juni Kriswanto via Getty)
Published 21 Aug 2019

Terrorist attacks inevitably generate frenetic global media coverage, with pundits examining motives, ascertaining network links, and theorising new developments or political repercussions. Numbers of deceased and injured are central to initial reports, but eventually victims are reduced largely to just that: figures that determine the severity or newsworthiness of a particular assault.

Today marks the United Nations International Day of Remembrance and Tribute to the Victims of Terrorism, which aims to highlight the ongoing struggle of countless victims worldwide, and to encourage governments to “promote, protect, and respect” their rights.

Indonesia in particular has sought to curtail the threat of terrorism in recent years. In May 2018, the government updated its anti-terrorism legislation, and among a raft of amendments, the new bill clarified the state’s responsibilities regarding victims of extremist violence on Indonesian soil.

While the refurbished law has so far helped boost recognition of the plight of victims, regulation required to fulfil the law’s intentions remains undelivered. Clear processes are necessary to identify victims and assess their immediate and ongoing needs.

Terror victims’ rights were specifically established in Indonesian law for the first time in the 2014 revised legislation on witness and victim protection. The problem with this legislation was that the category of “victims of criminal acts of terrorism” remained vague and undefined. Individuals explicitly mentioned by name in court-verdict documents may have been able to apply for compensation, but the Witness and Victim Protection Office (LPSK) was generally wary of distributing resources, for fear of accusations it might be misappropriating funds.

Chapter VI of the 2018 revised anti-terrorism law (5/2018) now states that victims shall be determined by the criminal investigation process. But in practice, they still need to be affirmed by court record. Once victims are identified, the state is obligated to provide them with medical assistance, psychosocial and psychological rehabilitation, and compensation, including for families in the event of death. Victims may also seek restitution from the perpetrator(s), where feasible.

However, the absence of an implementing regulation (Perturan Pemerintah) to flesh out the new law’s articles on victims and to provide clearer guidance on identification is causing uncertainty among individuals living with injuries. The regulation must be issued within three years of the law coming into force, or else victims who were not explicitly named in court documents will lose their chance to claim retroactive compensation.

Ideally, victim identification and needs assessments will involve medical professionals, which is not currently the case. Making do with the legal framework as it stands, the LPSK has been issuing assessment forms to individuals injured in terrorist attacks, which they are asked to complete by themselves. This flimsy personal appraisal has caused confusion in determining precisely what medical issues have been caused by the terrorist attack.

Coordination among different areas of victim support is also problematic. One young woman injured in a recent Jamaah Ansharud Daulah (JAD) attack was issued with a medical card to cover her hospital fees and was later given compensation in the form of a cash payment. When she returned to hospital for an operation related to the attack, her medical card was no longer active. She was told to use her compensation funds instead – money she badly needed for other life expenses.

The implementing regulation on Chapter VI of the anti-terror law needs to provide clarity on the different types of support victims may receive and the associated identification and application processes.

Mental health services are mentioned in both the 2014 LPSK law and the 2018 anti-terror updates, but they have so far not played a significant role in response and recovery efforts following attacks. This is partly due to the lack of mechanism for guiding victims into such services, but mostly because psychological issues are simply not prioritised by victims with painful physical injuries, children to feed, and bills to pay.

Aliansi Indonesia Damai (AIDA) has been arranging carefully managed meetings between victims and reforming terrorists since 2013, and AIDA representatives visit schools throughout the archipelago to conduct activities and build awareness. Mediation between victims and perpetrators is a highly delicate endeavour, of course, but if handled with caution and kept low-key, these emotional meetings can be promising for rehabilitation on both sides.

The state counterterrorism agency (BNPT) attempted its own reconciliation meeting between ex-militants and victims at a Jakarta hotel in March 2018. Roughly 50 victims and more than twice as many former terrorists attended the three-day event, which was criticised for being insufficiently sensitive to the victims’ feelings.

While BNPT’s intentions may have been in the right place, a state security agency is not the appropriate party to be organising such an effort, in any country. Not because civil-society practitioners are necessarily better at their jobs – it’s simply about their relative legitimacy and impartiality in the eyes of participants, who are quite likely to be fragile and prone to suspicion.

Victim-perpetrator engagements should be neither large-scale nor widely publicised. In this case, inviting as many people as possible was clumsy at best and fraught with potential problems. According to subsequent accounts, the odd offensive comment flew around between participants, an unfortunate and unconstructive scenario that would have been impossible to prevent with so many people in attendance.

The best way for the government to involve victims of terrorism in the nation’s struggle against violent extremism is to empower them to rebuild their lives independently. Last year’s legislative updates are a positive development, but they require greater procedural substance and clarity. Providing genuine support based on victims’ needs would surely send a more powerful message than any counter-ideological argument could expect to achieve.

We should encourage defectors from Chinese intelligence services, even if the bona fides in this case are not yet clear.
15 Dec 2017 14:30

How the region reported the Foreign Policy White Paper

The famed author roamed the grey of the international order and captured a world of “half-angels fighting half-devils”.