Is the AIIB still ‘lean, clean and green’?

It's a good moment to ask whether the AIIB is holding true to the most central and repeated claim that the bank will be 'lean, clean and green'.

It is just over two years since the United Kingdom announced (to the surprise of everyone involved, most notably the United States, but also China) that it would join the new, China-led multilateral development bank known as the Asian Infrastructure Investment Bank (AIIB). This triggered an avalanche of further signups, including China's frequent rival India and close US ally Australia.

Speaking at a recent conference in Berlin, broadcaster Markus Rimmele suggested that 12 March 2015 would one day be remembered as a 'milestone of a new geopolitical order'. Whether this turns out to be true, the bank's creation seems almost inevitable in hindsight, given China's growing economic power, the increasingly unrepresentative nature of the Bretton Woods institutions, and the pressing need for infrastructure across many parts of Asia.

Still, on this two-year anniversary, it's timely to ask whether the AIIB is holding true to the most central and repeated claim of its President, Jin Liqun, that the bank will be 'lean, clean and green'.

Taking the list in reverse order, the AIIB's inaugural batch of projects were mainly co-financed with other multilateral development banks, and were not high risk from an environmental point of view. But since that announcement, and particularly since two subsequent draft versions of the bank's energy strategy saw future loans for coal-fired power generation becoming more likely, some concerns have arisen.

Australia, a major coal exporter, the sixth-largest shareholder in the bank and chair of a voting constituency that also includes Vietnam (where coal generation and imports are rising) appears to have lobbied for this shift towards fossil fuels, causing a rare disagreement with the Western European constituency chaired by Germany.

It is worth considering the immediate human cost, too: a study by Harvard University and Greenpeace found air pollution from coal in Southeast Asia causes an estimated 20,000 excess deaths per year, which would increase to 70,000 by 2030 if coal-fired power plants presently planned or under construction go ahead.

What then, about Jin's claim the AIIB is 'clean' and 'will have zero tolerance on corruption'? Activists have raised questions about the AIIB's co-financing with the World Bank of the Trans-Anatolian Pipeline (TANAP), part of the European Commission's Southern Gas Corridor that connects Azerbaijan to Europe to curb dependency on Russian gas (though some dispute its necessity), where multiple firms contracted to build the pipeline in Turkey have been implicated in various forms of corruption in the past.

The human rights records of both Turkey and Azerbaijan should also give pause on whether borrower safeguards, such as public consultation exercises on project impacts, can be trusted. Transparency doesn't seem to be a strong suit of the new bank either, with an assessment by Bankwatch finding that the AIIB provides far less information to the public about its decision-making than its counterparts.

The bank's 'lean' status is, however, unquestionable. The AIIB has $US100 billion in subscribed capital but had fewer than 100 employees in October last year, with a goal of 500 by the end of 2018. The European Bank of Reconstruction and Development (EBRD), by contrast, has over $US36 billion in capital and 1500 employees in London. The World Bank boasts some 10,000 staff.

Is it possible to be clean and green while staying so lean? Upholding environmental and social standards takes oversight – difficult when a bank lacks a resident board of directors, or sufficient staff to implement safeguards. Such oversight requires capacity, particularly when there is pressure to lend. Some civil society groups have critiqued a recent $US20 million loan made to the Myingyan gas-fired power station in Myanmar, for example, as being pushed through too fast for consultations to take place, and for being approved before the bank had signed off its energy strategy. Others have raised concerns about a potential backlash sparked by a large-scale slum upgrading initiative in Indonesia that is likely to result in forced evictions.

Recognising the bank's thin staffing, it is incumbent on shareholders to help institute those checks and balances, and make sure the bank lives up to its admirable standards, rather than sparking a race to the bottom. 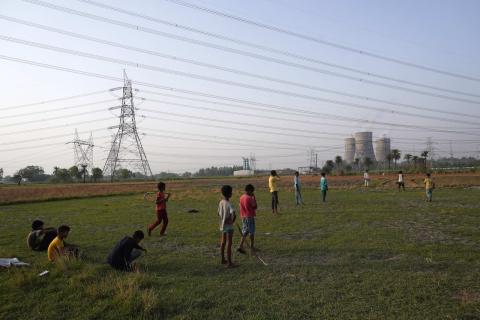 With memories of a five-year civil war still vivid, there is cautious optimism a move to a Federal system will help the nation prosper.
Henry Storey 28 Jun 2022 13:11

It’s often said there is no such thing as a free lunch, and issuing cash is not a limitless source of funding.