Authoritarian governments are quick to claim “fake news” in a neighbourhood crackdown on press freedom. Australia must be feeling more lonely in its part of the world as increasingly authoritarian governments across Southeast Asia use claims of fake news to clampdown on media freedoms and wind back democratic gains.

It seems many of our neighbours have been emboldened by US President Donald Trump’s attitude to the media, alongside his administration’s perceived indifference to human rights abuses. China’s long-standing tough stance on media control and censorship is likely also a factor.

Across Southeast Asia, news organisations are struggling with tightened government regulations and new laws, some of which are specifically aimed at “fake news”. Individual journalists and bloggers have found themselves labelled effectively “enemies of the state”. News outlets are increasingly censored through website blocking, arrests, cyber attacks, and other violations, and public broadcasters are also easy targets because they rely upon governments for financial support.

The 2017 World Press Freedom Index, prepared by non-government organisation Reporters Without Borders, noted that in the age of post-truth, propaganda, and suppression of freedoms, the authoritarian strongman model had triumphed. It declared, “the bad news is that media freedom is in the worst state we have ever seen”. All countries in the Association of Southeast Asian Nations fell into the bottom third of the Freedom Index, including countries once lauded as having the freest presses in the region, such as Thailand and the Philippines. 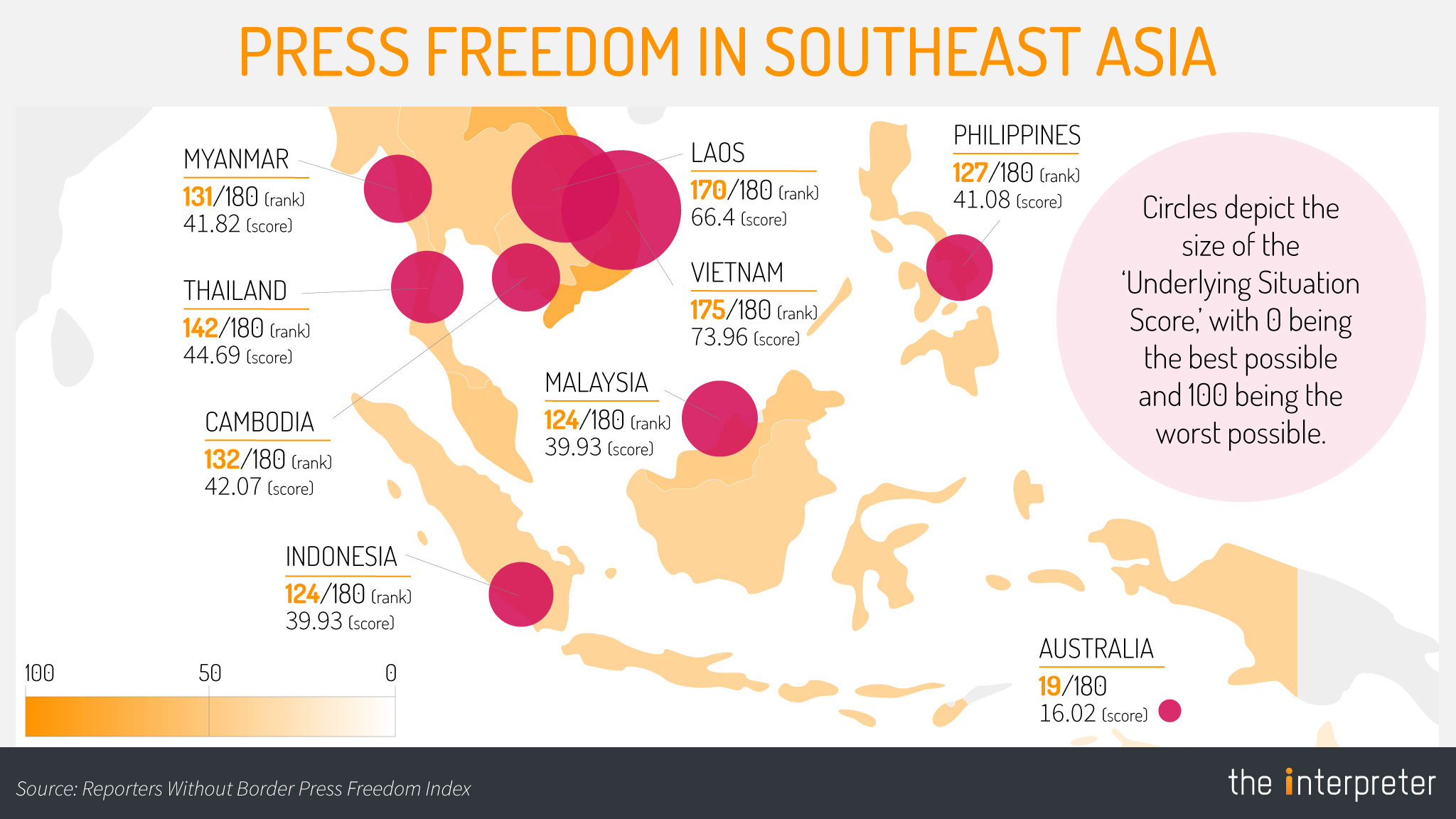 Democracy is also under intense pressure. Freedom House reported that last year was the 12th consecutive year of regression in global freedoms, and things have only worsened in 2018. The rule of law has deteriorated in the Philippines, Myanmar has made headlines for ethnic cleansing of the Rohingya, Cambodia’s semi-democratic system has collapsed, Thailand remains ruled by a military junta, and Indonesia faces rising populism and Islamism.

Malaysia, Cambodia, Myanmar, the Philippines, Thailand, and Indonesia provide the best examples of the increasingly difficult environment for media reporting on governments and individuals in power.

In Malaysia, the government has approved a fake news bill that will jail or fine those who circulate or publish misleading material. The bill not only covers news, information, data, and reports, but also cartoons and caricatures.

Even more worrying is that it allows for action to be taken against anyone, in any country, regardless of their nationality. All that is required is for the story to relate to Malaysia or a Malaysian, and to be deemed to be false. It also covers those who reproduce the content in some way.

To be clear, the government is clearly in control of determining what is fake. The Deputy Communications and Multimedia Minister said last month, for example, that any report about the Malaysia Development Berhad (1mdb) that was not verified by the government was fake news. The editor-in-chief of the most respected news outlet in the region, Malaysiakini news site, said the law was “a death blow to the sliver of democracy that we have”.

In Cambodia, Prime Minister Hun Sen has joined other increasingly autocratic leaders openly celebrating Donald Trump’s war on fake news, associating his government’s crackdown on the media with the stance of the US president.

The Cambodian Government used a massive tax bill to shut down the Cambodia Daily newspaper and forced the closure of major radio stations that relayed US Government–backed Radio Free Asia and Voice of America broadcasts across the country. The Phnom Penh Post is also negotiating a tax bill with the government, although the newspaper’s CEO has said those negotiations were “routine”. Foreign journalists, however, are complaining of difficulties in seeking official accreditation.

Meanwhile, hopes that democratic transition in Myanmar would increase press freedom have been dashed as the government and military use outdated laws to threaten and jail journalists, particularly those covering the Rohingya crisis where there is disagreement between local and foreign media about how to cover the issue.

Global star human rights lawyer Amal Clooney has been enlisted to plead the case for two Reuters journalists arrested in late 2017 while they investigated the killing of 10 men in Myanmar’s Rakhine State. The pair is accused of violating the colonial-era Official Secrets Act and face a maximum 14 years’ jail. Although it’s not clear if she’ll be granted a visa to appear, Clooney has issued a statement saying the journalists are being prosecuted simply because they reported the news:

It is clear beyond doubt that the two journalists are innocent and should be released immediately. The outcome of this case will tell us a lot about Myanmar’s commitment to the rule of law and freedom of speech.

In the Philippines, President Rodrigo Duterte has been at war with the press since the time of his 2016 election campaign when he declared, “Just because you’re a journalist, you’re not exempt from assassination if you are a son of a bitch”. Since his election, Duterte has labelled the Philippine Daily Inquirer and broadcaster ABS-CBN as “sons of whores”, and warned of repercussions over their criticism of him.

New laws about fake news are now pending, which has news creators and distributors worried about fines, or even jail. Public officials found guilty under the new laws are expected to face fines and jail terms double those for ordinary citizens.

The Duterte government has withdrawn the operating license for Rappler, one of the country’s most prominent independent news outlets, accusing it of violating a constitutional prohibition on foreign ownership of media companies. Rappler angered President Duterte with its criticism of him and by publishing the transcript of his April 2017 call with Donald Trump, during which the US President praised Duterte’s murderous “drug war” and invited him to the White House.

Duterte has labelled Rappler as “fake news”, and its license to operate has been revoked (Rappler is appealing the decision). Rappler chief executive Maria Ressa is holding the line, saying that she and her reporters have been attacked online with death and rape threats by trolls. She said:

It is much easier to be in a war zone because you know where the gunfire is coming from. In the virtual world, you don’t know what’s real and what is not.

[It will have a] profound chilling effect on Philippine media freedom, encouraging self-censorship by reporters and media outlets fearful of government reprisals for critical reporting at a time when the watchdog role of a free press is more urgently needed than ever.

In Thailand, the military is tightening pressure on news outlets that publish stories critical of the country’s ruling elite, declaring that journalists need an “attitude adjustment”. Various reporters have been detained, and the government increasingly refuses to deal with the media.

In January this year, Prime Minister of Thailand Prayuth Chan-o-cha went so far as to prop up a life-sized cardboard cut-out of himself and tell reporters quiz it instead. Kavi Chongkittavorn, former president of the Thai Journalists Association, has been reported as saying these actions:

reflect the growing confidence, and even sense of impunity, of ruling parties that they are very much in control of their own narratives.

Journalists in Indonesia are facing various threats from the government and the Islamic Defenders Front. Looking to solve their own fake news crisis, police have established a unit to monitor social media for misinformation. The unit is also responsible for disseminating information about public order and educating users on pro-social usage of social media.

More concerning is Indonesia’s House of Representatives, which has passed a law giving its members powers to press charges against their critics. The Law of Representative Assemblies – locally referred to as the MD3 law – allows members to force police to bring people into the House of Representatives (DPR) to be questioned by politicians. The University of Melbourne’s Director of the Centre for Indonesian Law, Islam and Society, Professor Tim Lindsey, told the ABC the laws were aimed at creating “a DPR that is able to resist criticism, and stifle criticism, and which protects its members from prosecution”.

The editors of Indonesian weekly magazine Tempo, which has covered news and politics since 1971, are refusing to apologise for a cartoon they published which is perceived to be mocking the leader of the Islamic Defenders Front.

Considering these concerns across the region, as well as more in Vietnam, Laos, and Brunei, and the general reporting difficulties in Singapore, it seems the authoritarian governments are winning. At the General Assembly of the Confederation of ASEAN Journalists in Bangkok held in January, only delegates from Thailand complained about media restrictions in the region. Confederation of Thai Journalists President Thepchai Yong said, as reported by the Nikkei Asian Review:

From being a beacon of press freedom many years back, Thailand has now been put in a group of countries where the freedom of press is threatened.

Delegates from the other ASEAN countries praised their leaders (Cambodia), or in the case of the Myanmar Journalists Association, Kyaw Swa Min joined the government rhetoric on the amount of “fake news and hate speech” surrounding recent developments in Rakhine. Despite a number of arrests for criticising the country’s leaders in the press and on social media, Swa Min told his colleagues that the MJA had successfully lobbied for leniency.

While nobody can predict the future, two things are fairly certain: the media across Southeast Asia is not optimistic about the future of press freedom; and democracy, as Australia wants it to operate in our region, is in great peril.

Emmanuel Macron wants to restore France to be a great power but despite a regional footprint his dreams may be fleeting.
Shivangi Seth 14 Jun 2022 11:53

Sending women to serve as peacekeepers is laudable. But at home, women continue to be marginalised.
Max Uechtritz 9 Oct 2017 17:03