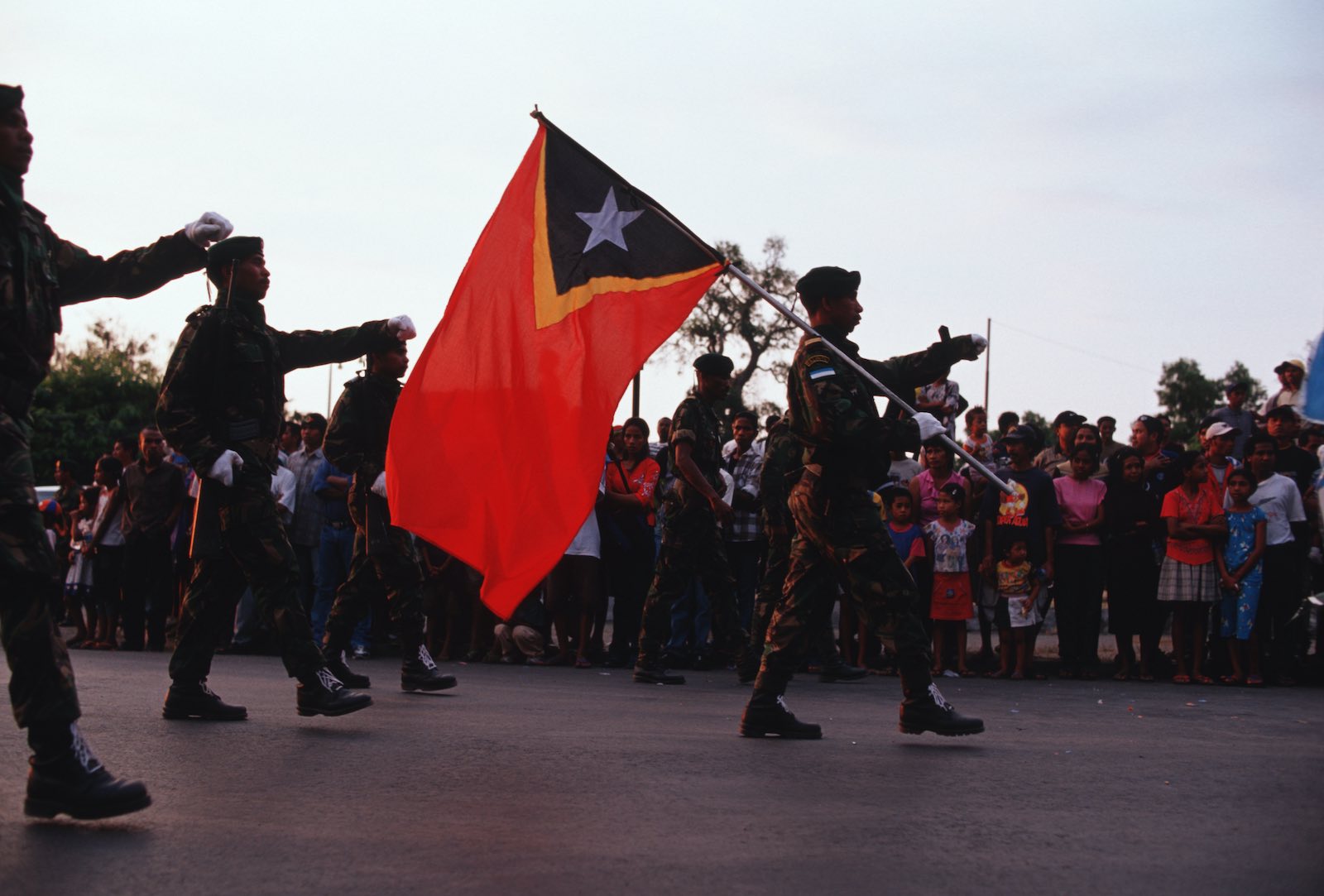 A parade on the anniversary of the founding of Falintil (Armed Forces of National Liberation of East Timor), Dili, 1 August 2002 (Jerry Redfern/LightRocket via Getty Images)
Published 12 May 2021 06:00   0 Comments       Follow @JobPeterjob1

Since his death on 13 April, tributes to former Australian foreign minister and leader of the federal opposition Andrew Peacock have flowed from across the political divide. He has been remembered as a huge figure who left an “indelible” mark on Australia in the 1970s and 1980s. Former Liberal Party leader John Hewson has described him as a “great Australian” who as a moderate “small-l liberal” took principled stands in foreign relations. Former prime minister John Howard pronounced him a “quite outstanding” foreign minister.

Peacock’s credentials as a liberal internationalist are considerable. As Minister for Territories under the McMahon government (1971–72), he was instrumental in moving Papua New Guinea towards independence. As foreign minister under the Fraser government from 1975 to 1980, he was active in opposing apartheid in South African and in working through the Commonwealth to end white majority rule in Zimbabwe. He was forthright in criticising human rights abuses in countries around the world, including in Chile, Uganda and Iran. He broke with Fraser about continued recognition of the murderous Khmer Rouge regime in Cambodia after the Vietnamese invasion, a factor that influenced his resignation as foreign minister in 1980.

There is, however, one vital apect of Peacock’s legacy that has not received attention: the role he played in establishing and supporting the Fraser government’s position on East Timor. More specifically, supporting the attempted Indonesian annexation, propagating a false narrative about it to the Australian public and the international community, and protecting the Suharto regime from scrutiny in a situation of dire human rights abuses and loss of life.

Peacock was initially well disposed towards supporting the Timorese people in their aspirations for national independence. As opposition spokesperson on foreign affairs before the invasion in 1975, he supported East Timorese self-determination, meeting Fretilin foreign representative José Ramos Horta when he came to Australia and accusing Prime Minister Gough Whitlam of following a “bankrupt foreign policy” in supporting an Indonesian takeover. He advocated a “free act of self-determination” and a more proactive approach, including establishing links with Timorese politicians.

When a brief civil war led to the coming of power of a fledging Fretilin government and the instigation of Indonesian covert military operations in response (under the pretence of being pro-integration Timorese forces), Peacock advocated a regional approach to ending the conflict and Australia acting as a mediator between Portugal, Indonesia and the Timorese. Just days before the Whitlam dismissal, Peacock published an article in the Melbourne Herald expressing fears of a prolonged guerrilla war and strongly criticising the government’s position of supposed non-involvement.

This position, however, came to an abrupt end after 11 November 1975, when the Australian Governor General appointed the caretaker Fraser government, making Peacock caretaker foreign minister. Both Fraser and Peacock initially explored possibilities of a policy re-orientation, with Peacock proposing a letter of concern to Suharto about the Indonesian covert intervention and Fraser raising the possibility of a United Nations peacekeeping force to restore order at the invasion. In both cases, they were talked out of these actions by Department of Foreign affairs officers who argued that Indonesian moves towards forced integration had gone too far to be effectively opposed, and that it was not in the Australian interest either to oppose the Suharto regime on the issue or to support the prospect of an independent East Timor.

Under pressure from Fraser, who was hostile to a left-wing entity such as Fretilin, and a foreign affairs department urging a pro-Indonesian position, Peacock made an abrupt about-face. He supported the continuing complicity, entailed by frank consultations between Indonesian intelligence and the Jakarta embassy, in covert Indonesian military actions in the territory. As had Whitlam before him, he propagated the untruth that these illegal and lethal covert Indonesian military actions were a civil war between Timorese, thus allowing Indonesia to dishonestly depict itself at the invasion as responding to a dangerous and destabilising situation not of its making.

The Fraser government viewed strong relations with Suharto’s New Order as the key to its regional security strategy and to strengthening relations with the anti-communist ASEAN nations, which it viewed as vital in the wake of the unification of Vietnam and the coming to power of communist governments in Laos and Cambodia. The issue of Timor Sea resources added a further impetus to this position. That said, the ardency of Peacock’s conversion and the actions he took in support of an Australian cover-up of the dire humanitarian and human rights emergency unfolding in one of Australia’s nearest neighbours was extraordinary.

At the invasion on 7 December 1975, he avoided direct condemnation of the Indonesian action, instead regretting “the course which events in East Timor have taken” while appreciating “the gravity of the problems posed for the Indonesian government”. This obscured the deliberate undermining of the Timorese decolonisation process by the Suharto regime and the lethal and illegal covert Indonesian military intervention that had preceded the invasion.

Peacock visited Jakarta on 19 and 20 January 1976, where he expressed his agreement with Suharto that that “the matter [of self-determination] should be solved quickly”, a clear message of support for a perfunctory rubber-stamping of incorporation rather than genuine choice. Without making any substantial criticism of the invasion, he stressed the “utmost importance” of the relationship between the two countries and of resolving difficulties “between friends”. Some five weeks after the invasion, in a situation of escalating conflict, death and human rights abuses, this would have sent a message that the Suharto government could continue its campaign and the cruelties that accompanied it without fear Australia would criticise it in the international arena.

In March 1976, Peacock rejected an end to military aid to the Indonesian military, claiming it was “of value to both countries”. Subsequent years saw the gifting of a variety of materiel, including nomad aircraft that were used in East Timor, helicopters, Land Rovers, fighter jets and patrol boats. The following years saw the emergence of a prolonged conflict and severe human rights abuses as the Indonesian military attempted to suppress a sustained East Timorese resistance. The Indonesian military’s campaign of “encirclement and annihilation” from 1977 destroyed rural food resources, causing a famine that took many lives. Peacock announced de facto recognition of Indonesian sovereignty over East Timor in January 1978, with Australia indicating it was ready for negotiations on the Timor Sea.

During these years, the Australian government actively supported the Suharto regime in both the domestic and international arenas, denying evidence of abuses and belittling those who claimed otherwise. In early 1977, a report based on interviews with Timorese refugees in Portugal by former diplomat and intelligence officer James Dunn contained accounts of massacres, sexual violence, induced famine and other human rights abuses which have since been largely backed up. Peacock responded by questioning the report’s credibility and warning against the possibility of it creating a “misunderstanding” with Indonesia. His department lobbied against Dunn internationally when he took his message to a number of European countries and the US, spuriously dismissing Dunn’s report and describing his claims as “highly exaggerated”, and dissuading the Dutch government from initiating an international inquiry into the situation.

This narrative of denial regarding the situation in East Timor continued throughout Peacock’s period as foreign minister. In response to a question in parliament about the use of napalm in November 1977, for example, Peacock insisted he had no information regarding allegations that are “made consistently by a clique in this country” with an agenda on East Timor. When in late 1978 a group of visiting ambassadors reported a humanitarian emergency and widespread starvation, Peacock responded by blaming it on the “very poor” subsistence conditions in the territory, exacerbated by fighting between Timorese.

In 1980, he deflected claims by Amnesty International of large-scale abuses in East Timor by stating that he had “no information available to corroborate” such allegations and contending that “the position of the Australian government regarding violations of internationally accepted standards of human rights is well known to the Indonesian Government”. These efforts were paralleled at the United Nations, with Australia actively lobbying in support of the Suharto regime, propagating disinformation about the origins and nature of the conflict, dismissing claims of a humanitarian crisis and attempting to remove the issue from the UN agenda.

The actions of the Australian government during this period are a part of Australian history that needs to be understood.

Peacock continues to be regarded widely as a liberal internationalist and a supporter of human rights and the international rule of law. While this image may be tempered by his actions on East Timor, Peacock’s position was very far from singular. The Australian government’s Timor narrative, while in contradiction to the weight of evidence emanating from the territory during this period, was supported by an array of politicians, government officials, journalists and academics. Australian lobbying to protect the Suharto regime not only delayed longer-term action to resolve the issue, but also shorter-term actions to relieve suffering, including the entrance of the International Committee of the Red Cross, a situation which almost certainly cost many lives.

This is part of Peacock’s legacy that should not be ignored. Most significantly, the actions of the Australian government during this period are a part of Australian history that needs to be understood, and with which the nation has yet to come to terms.