South Korea’s president has won the new administration in Washington over to his way of thinking. 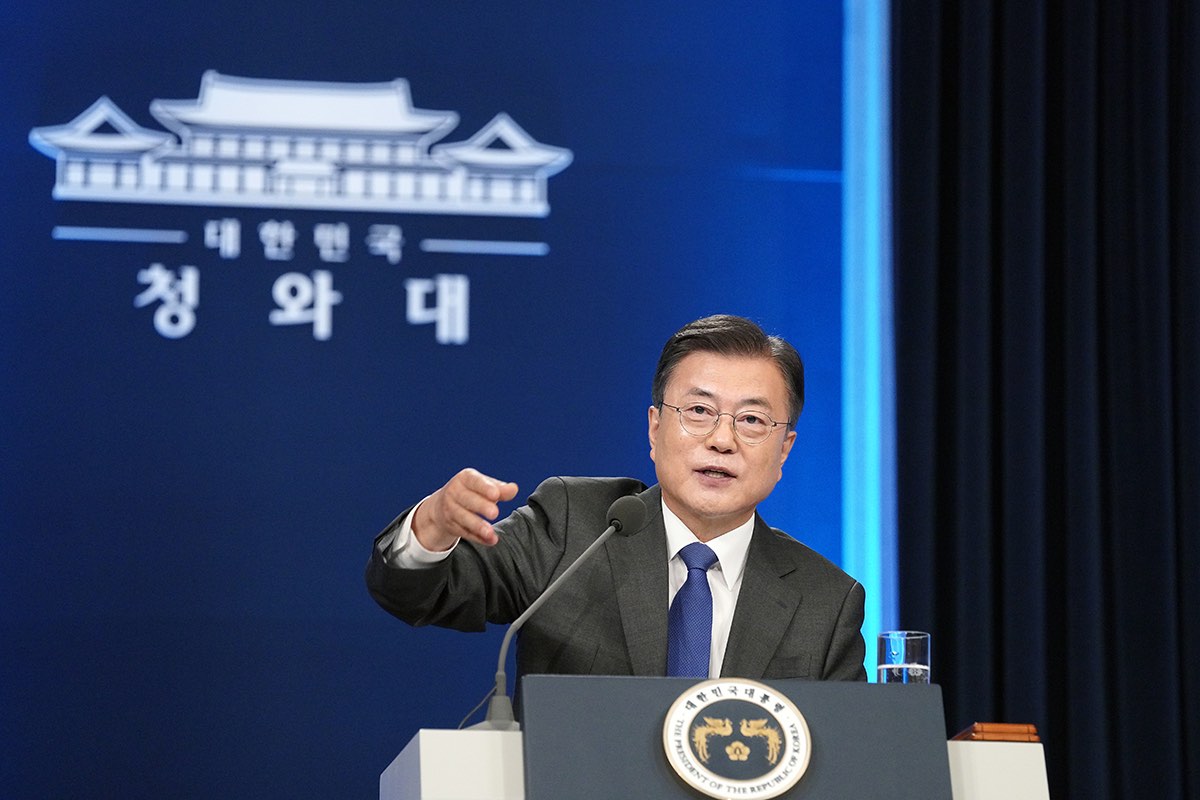 Moon Jae-in delivers a special address to mark the fourth anniversary of his inauguration at the presidential Blue House, Seoul, 10 May 2021 (Getty Images)
Published 11 May 2021 13:00   0 Comments       Follow @KhangXVu

US President Joe Biden will later this month hold his first face-to-face meeting as president with his South Korean counterpart, President Moon Jae-in. In the lead-up to the 21 May meeting, the United States has announced the preliminary results of its North Korea policy review. Although lacking in specifics, the review made clear the Biden administration would commit to “a more calibrated, practical, measured approach” towards North Korea, one that seeks progress towards denuclearisation through diplomacy. Gone are the days of “fire and fury” or even the more gently named “strategic patience”.

So far, the Biden administration has walked the talk. Washington has reached out to North Korea twice since mid-February in a bid to jump-start talks, which had been dormant since 2019 meetings in Stockholm. The US also considered the policy review to be a small olive branch, and whether diplomacy goes forward would depend on North Korea’s willingness to accept the offer.

North Korea did respond, with the usual bluster. Still, experts saw Pyongyang’s language as soft and with enough space for talks to resume, should the North change its mind.

And all this means Moon emerges as the winner from the preliminary policy review.

If North Korea does not carry out any major provocations and Biden commits to diplomacy, a conservative successor to Moon will be less likely to kill détente.

Ever since Biden assumed the presidency in January, the Moon administration has gone to great lengths to lock Washington into Seoul’s policy of engagement. Revitalising inter-Korean and US–North Korea diplomacy was among the priorities on the agenda for South Korea when US Secretary of State Antony Blinken and Secretary of Defense Lloyd Austin visited Seoul in March, as it was when US, Japanese and South Korean national security advisors met in April.

Moon himself gave an exclusive interview with The New York Times as part of the drive to persuade Biden to take “gradual and phased” steps towards denuclearisation based on a “mutually trusted roadmap”. Moon also wanted Biden to preserve the 2018 Singapore Declaration signed by then–President Donald Trump and North Korean leader Kim Jong-un give moves to reverse many of former administration’s policies.

Importantly, Moon’s victory will not be just short-term gains. The lack of details in Biden’s policy review, coupled with his commitment to work with South Korea, plays to Moon’s advantage for the South Korean president and can help fill in the blanks in the context of the 21 May meeting. US officials admit that one of the challenges behind the policy review is how to create the momentum behind the phased approach to get the North to come back to the table, and then create the incentives for Pyongyang to fulfill its end of any deal.

Moon can step in to provide such a momentum, as his government has been calling for a resumption of inter-Korean talks at all levels. Seoul also laid out its own plan to push forward talks between United States and North Korea under the Biden administration and welcomed the US attempt to contact the North. It recommended the US appoint a special representative to North Korea as a signal of US seriousness to engage. To tie North Korea into the process and reduce risks of defection, South Korea is planning to open an embassy-like mission in the North’s capital and reopen Mount Kumgang Resort and Kaesong Industrial Complex. The idea is to convince the North that future benefits of long-term engagement are even greater than what might be won initially.

To help the North overcome its scepticism of Biden and preference for Trump, Moon even blamed Trump for the lack of progress with North Korea (prompting an angry response from the former president). Moon also cited “external conditions and realistic restraints” as the causes of diplomatic setbacks in the past two years, seeking to build a rapport by arguing that a change in the US administration may be a good thing now that the external conditions have improved.

Moon’s diplomatic victory can translate into domestic victory. Moon’s time is running out, and he wants to hedge against a conservative successor, who is likely to reverse the policy of engagement. By integrating his vision into Biden’s North Korea policy, especially tying sanctions removal with resuming inter-Korean economic projects, Moon wants to set the terms of North Korea policy for the next South Korean president. If North Korea does not carry out any major provocations and Biden commits to diplomacy, a conservative president will be less likely to kill détente.

It is possible that Moon’s shuttle diplomacy will make a comeback as he attempts to fill in the blanks of Biden’s North Korea policy. Moon has explicitly hoped that the Moon-Biden summit would be an occasion to kickstart diplomacy with the North. Although Pyongyang has a say in the final outcome of Biden’s North Korea policy, Seoul will have a say in how the policy is crafted and implemented.