An empty chair in New York would be a potent reflection of the situation on the ground in post-coup Myanmar. 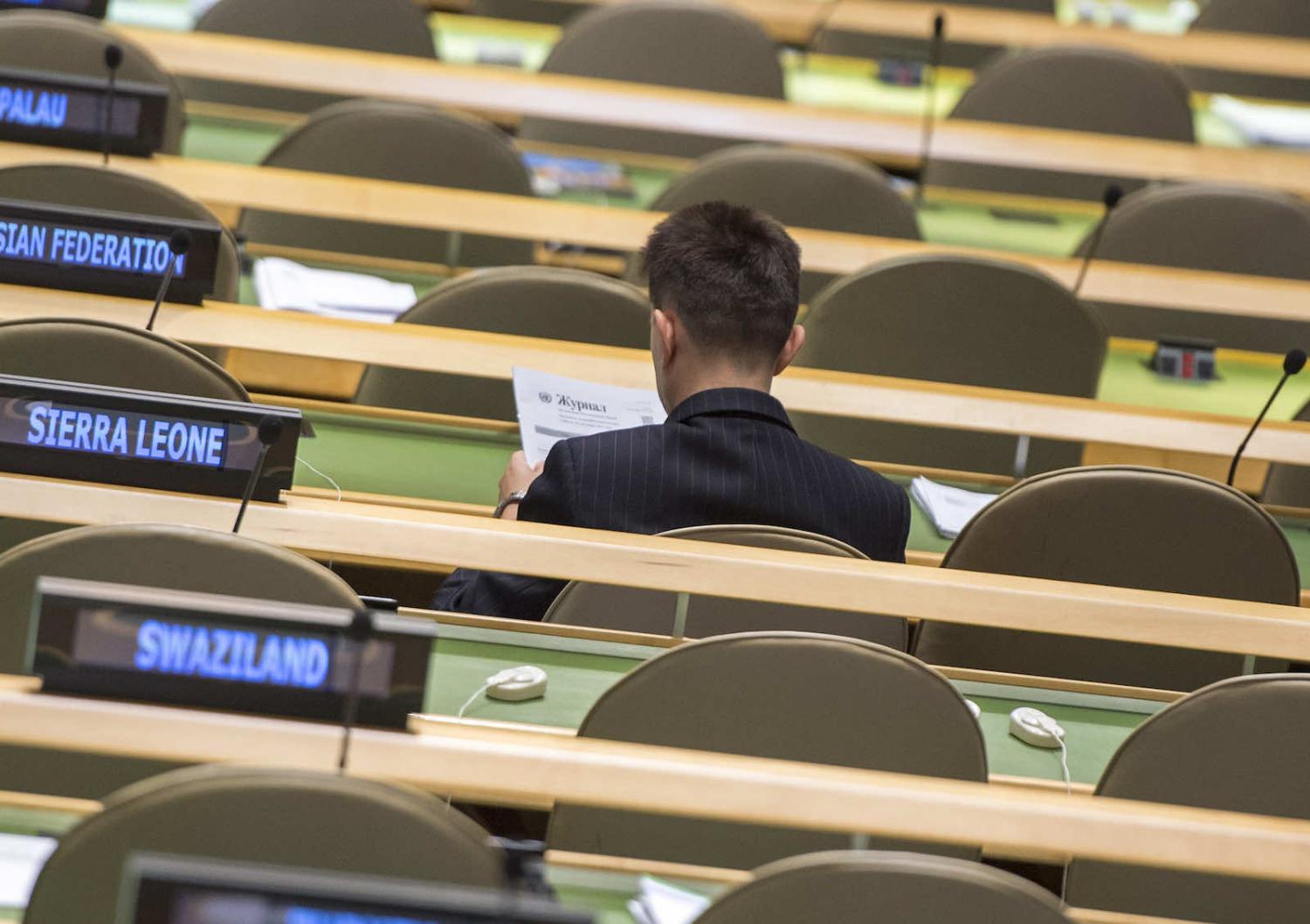 Across Myanmar, the battle continues between the military and those opposed to the military coup d’etat of 1 February 2021. Opposition to the coup began with non-violent resistance in the form of the Civil Disobedience Movement. The aim is now revolution and an end to the military’s decades-long dominance of political life. The revolutionaries have brought within their fold some of the armed ethnic organisations that have long fought against the military in the country’s borderlands. Civil war is looming.

A different battle for Myanmar is being fought in the United Nations.

On 14 September, the 75th UN General Assembly (UNGA) will meet in New York. Presidents, prime ministers and dictators from across the world – or their representatives – will gather to discuss, debate and make recommendations on global issues. The question de jour is who will represent Myanmar – the military’s representative or the representative of the democratically elected, ousted government?

It is the job of a nine-country Credentials Committee to make a recommendation to the UNGA about whose credentials to accept. It is rare for the Committee to accept the credentials of an ousted government that does not hold power or control territory, but it is not unprecedented (Haiti in 1992, Sierra Leone in 1997). In some contentious cases, the Committee has deferred making any decision at all (Afghanistan in 1996 and Cambodia in 1997).

What happens in the UNGA is another matter again. It is common practice for the UNGA to accept the recommendations of the Credentials Committee without a vote. But there is no rule that it must. In 1973, the UNGA voted to reject the credentials of the representatives of South Africa because of the country’s anti-democratic apartheid regime.

In the case of Myanmar, the UNGA stands with the democratically elected government. In June 2021, the UNGA passed a resolution calling on Myanmar’s armed forces to respect the will of the people – as freely expressed in the 8 November 2020 election – and called on all countries to end arms dealing with Myanmar. The resolution is not binding but it is significant – the UNGA very rarely condemns coups. The resolution was passed with only one vote against – that of Belarus – and with the support of more than half the Association of Southeast Asian Nations (ASEAN) states.

A vote in the UNGA about the credentials of the Myanmar appointee would probably go the way of the ousted government.

In the run-up to September, Myanmar’s government-in-exile, the National Unity Government (NUG), is engaged in a worldwide lobbying effort for diplomatic recognition. Recognition – by powerful states or by many states – would boost the NUG’s case for recognition by the Credentials Committee.

Recognition of a government on a state-to-state basis is a unilateral political act – states are entitled to recognise whichever government they want. The general practice is that states recognise the government that exercises military control over the territory of the state – and holds the capital city. On this count, in Myanmar’s case, the military’s claim is stronger.

It would be a historic moral victory for the men and women fighting in Myanmar if a representative of the NUG were to take the seat of Myanmar in September. But it would also seriously undermine the prospect of bringing the crisis to an end.

The military controls Myanmar’s airspace and while it does, the revolutionaries cannot win the battle for territory. China, Russia and many of Myanmar’s neighbours in ASEAN have effectively recognised the governing authority created by the military, the State Administrative Council (SAC).

The NUG is pursuing the argument that states should recognise the body that best represents the will of the people – and their right to self-determination. On this count, the NUG’s claim is undoubtedly the stronger. The National League for Democracy (NLD) was the clear winner of the 2020 election, despite the military’s claim that the election was tainted by irregularities. Key NLD members such as State Counsellor Aung San Suu Kyi and President Win Myint form part of the NUG. Other members include parliamentarians from the ousted government and representatives of most of the country’s many ethnic states – and with discussions to include a Rohingya representative.*

No state has yet granted recognition to the NUG, though many have met with NUG representatives. In recent meetings of the UN Human Rights Council and the World Health Organisation, neither the NUG nor the SAC has been given a seat. This may be the outcome in the UNGA as well.

It would be a historic moral victory for the men and women fighting in Myanmar if a representative of the NUG were to take the seat of Myanmar in September. But it would also seriously undermine the prospect of bringing the crisis to an end. With the symbolic support of the UN behind them, those on the ground in Myanmar would fight harder for a costly and improbable victory. The military, ostracised still further, would have fewer reasons to move forward with the only concession it has made to date – the Five-Point Consensus adopted at the ASEAN Leaders Meeting on 24 April.

ASEAN has now appointed a Special Envoy to Myanmar and the UN has committed to working with the Envoy to alleviate Myanmar’s growing humanitarian crisis. Leaving Myanmar’s seat vacant in the UNGA is the best representation of what is happening on the ground. It also provides the best chance of stemming the tide of civil war.

* This article has been amended following publication to add the words “with discussions to include”.

Previous Article
Australia and India: A time to refocus on trade talks
Next Article
Afghanistan: Russia faces its own risks and uncertainty

The midterm elections this week may change the balance of power in Washington and re-define Donald Trump’s presidency.
Stephen Howes 9 Apr 2020 12:00

As the next wave of Covid-19 bears down on developing nations, is there a chance they can avoid the worst?