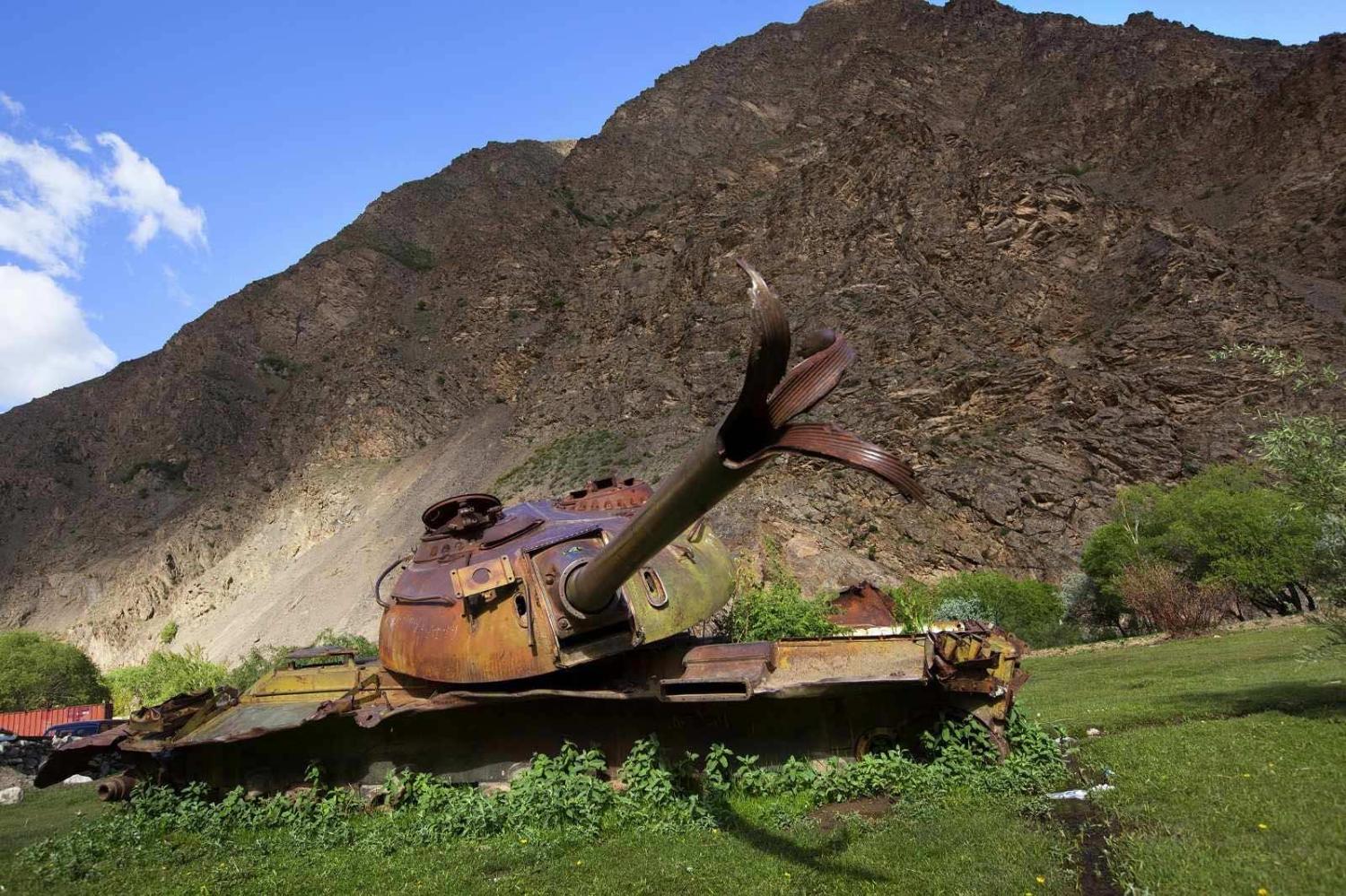 The remnants of a Russian tank in the Panjshir Valley after the area was seized by mujahideen during the Afghan war of 1979-1989, are a reminder of a futile decade-long conflict (Reza/Getty Images)
Published 10 Aug 2021     Follow @IAHill

The American withdrawal from Afghanistan offers some opportunities to Russia – but exposes it to greater uncertainty and risk.

Russia has long been ambivalent about the US/NATO force presence in Afghanistan. On the one hand, Moscow recognised, and valued, the stabilising role they played in the country over the past 20 years, restraining extremist groups and bolstering the Afghan authorities – thereby protecting Russia’s southern approaches.

Yet Moscow found the US military presence unsettling, close by its sphere of influence in Central Asia, and suspected America might look to make its stay more permanent, entrenching itself as a player on the Eurasian chessboard.

While criticising the US withdrawal as hasty, Russia may draw satisfaction from the inconclusive outcome of America’s long struggle in Afghanistan ­– recalling its own humiliating withdrawal in 1989 after a futile decade-long conflict waged to support its client regime in the face of mujahideen assaults.

Of particular concern to Moscow are Islamist extremist factions now operating in northern and eastern Afghanistan, reportedly including Islamic State veterans from Syria and elsewhere.

Yet such schadenfreude will be tempered by unease about what the ensuing turmoil now engulfing Afghanistan portends.

Moscow seems concerned less about who wins and loses the emerging Afghan civil war and more about whichever authorities gain sway in Kabul being able to impose some order on the country.

This reflects Russia’s key interest in preventing any spillover of instability and Islamist extremism from Afghanistan into adjacent Central Asian countries – Tajikistan, Uzbekistan and Turkmenistan – with potential flow-on terrorist risks for Russia itself.

Moreover, on-going conflict in Afghanistan risks substantial outflows of refugees across its borders, imposing further strains and tensions on its neighbours. Curbing the damaging flow of narcotics out of Afghanistan, through Central Asia and on to markets in Russia, is another priority for Moscow.

Of particular concern to Moscow are Islamist extremist factions now operating in northern and eastern Afghanistan, reportedly including Islamic State veterans from Syria and elsewhere. Russia fears that these elements might seek to infiltrate and foment unrest in neighbouring Central Asian states, exploiting porous borders and close ethnic ties.

Moscow appears to regard the Taliban as less worrying in this regard, judging the group’s objectives as primarily focused on gaining power and control within Afghanistan itself.

Indeed, Russia’s special envoy for Afghanistan, Zamir Kabulov suggests that, to the extent that expansion and consolidation of Taliban control in Afghanistan limits the threat posed by other Islamist extremist factions, this serves Russia’s interests.

How then is Russia approaching the situation as the US military presence winds down?

Moscow has no appetite to get involved on the ground again in Afghanistan – that much is clear. Russia has learned the bitter lessons of its past Afghan involvement.

Instead, Russia is focused on bolstering the security of its vulnerable Central Asian partners along Afghanistan’s northern borders – especially Tajikistan.

The Afghanistan conflict does provide Moscow with the opportunity to demonstrate, and consolidate, its implicit role as the primary security provider for the former Soviet republics along its southern periphery – although it has a full defence treaty relationship only with Tajikistan. (Uzbekistan suspended its Collective Security Treaty Organisation (CSTO) membership in 2012, while Turkmenistan asserts a neutral status.)

Tajikistan is particularly exposed: impoverished and brittle, with long-time strongman ruler Emomali Rahmon (who emerged as leader from the savage civil war that engulfed the country in the 1990s) now looking to secure a power transition to his son. Russia maintains a large military base near the Tajik capital Dushanbe, focused on border security.

Pakistan is of particular importance, given the close (and not always helpful) role it has long played in Afghan affairs.

Already, large numbers of Afghan government soldiers and refugees have fled across the border into Tajikistan from northern Afghanistan. Tajikistan has mobilised its reservists.

Moscow has intensified diplomatic efforts to secure a political settlement that promotes stability in Afghanistan. It has hosted talks between the Afghan government and the Taliban (with whom it has been quietly talking since 2018, despite its proscribed status in Russia). Russia has also engaged with other key players, notably China, Pakistan and the United States.

Pakistan is of particular importance, given the close (and not always helpful) role it has long played in Afghan affairs. Moscow has stepped up its contacts with Islamabad, with Foreign Minister Sergey Lavrov visiting in April this year  – his first visit in nearly a decade. Russia has undertaken to intensify security cooperation with Pakistan – although Moscow will be careful to manage sensitivities in neighbouring India.

The two countries have a shared interest in cooperating to prevent spillover of Islamist extremist activity beyond Afghanistan’s borders – in China’s case, fearful of contamination to Uyghurs in neighbouring Xinjiang. But Moscow will be protective of its leading security role in Central Asia.

And both countries have long-term economic ambitions in Afghanistan. China is eyeing copper and rare earth mineral resources, and is working to upgrade transport links through the Wakhan Corridor. While Russia hopes planned construction of energy and transport infrastructure through Afghanistan will open up economic opportunities through to the subcontinent and Indian Ocean.

But this all depends on whether security in Afghanistan can be assured.

For Russia, then, much is riding on what happens next in Afghanistan.

Previous Article
The battle for Myanmar’s seat in the UN General Assembly
Next Article
Pacific needs partnership, not just leadership

The new president might talk up China ties, but relations with the United States appear to be on the mend.
Sam Roggeveen 16 Sep 2017 08:00

This week we continued our delightful new series on foreign correspondents to mark the imminent awarding of the annual Lowy Institute Media Award.
Sian Troath 17 Jan 2019 12:00

Is the reality of Indonesia’s politics forcing a hardliner to become more moderate?