The WTO fight over India’s sugar subsidies is a chance for New Delhi to encourage farmers into more profitable crops. 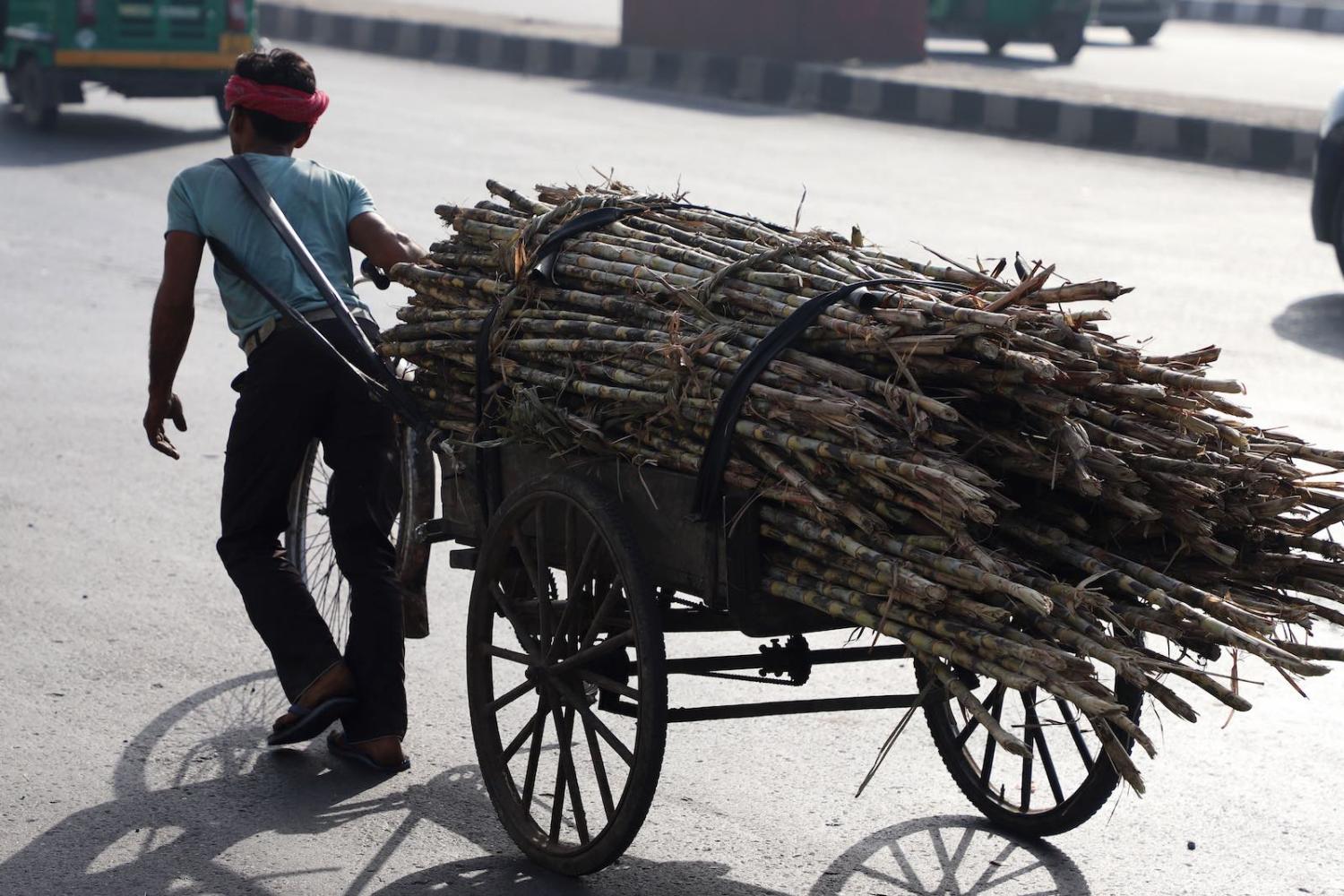 Over the past few months, sugar has featured prominently in India’s political and economic discussion. Countries such as Australia, Brazil and Guatemala are upset with the Indian government’s subsidies to its sugarcane farmers, alleging in a claim to the World Trade Organisation (WTO) that the subsidies are inconsistent with global trade rules and have led to a “glut” and “depressed” global prices.

India argues that it is a marginal player in global trade, accounting for less than one per cent of global sugar exports, and that the subsidies were solely to prevent Indian cane farmers from having to make distressed sales.

India is the second-largest producer of sugar in the world (most of its sugar is consumed domestically), after Brazil. Sugar wields immeasurable influence on Indian politics. The sugar industry engages around 50 million farmers and two million mill workers. The states of Maharashtra, Uttar Pradesh and Karnataka together produce about 81% of India’s sugar and represent more than 155 members in the Lok Sabha (the lower house of Indian Parliament). Of the 183 sugar mills, 101 had chairpersons who competed for state or national elections between 1993 and 2005. With high subsidies at every level, sugarcane is the most profitable crop, encouraging farmers to continue producing sugar.

With high subsidies at every level, sugarcane is the most profitable crop, encouraging farmers to continue producing.

The central government fixes a minimum sugarcane price, the Fair and Remunerative Price (FRP) that is paid by mills to farmers. Some state governments also intervene in sugarcane pricing with a State Advised Price (SAP). The farmer’s profit is affected by the cane price, farm productivity and the cost of cultivation. The mills’ profit is driven by sugar prices in domestic and international markets and by sales of by-products like molasses, alcohol (including ethanol).

A high cane price benefits farmers, but leads to lower profits for mills. When the sugar supply far exceeds demand, the government resorts to export. But that’s easier said than done, as Indian sugar is expensive by global standards. This leads to unsold inventories and unpaid dues to the growers. The mills struggle to pay the farmers and as arrears mount, the government is forced to step in and help the mills clear the dues through relief packages. The root cause behind the arrears is the government-fixed price. Data suggests mill owners owe growers almost US$3 billion. Coupled with drought affecting the water-intensive sugarcane crop, this debt has contributed to thousands of suicides by cane farmers.

Australia argues that distortions to the global sugar market have affected its AUD$2 billion sugar export industry, which has 4,000 cane farms and 24 sugar mills. It claims India’s subsidies for sugarcane were almost 10-times WTO limits in 2016­–17.

Australia’s agricultural policy has undergone continuous and significant reform since the 1980s. An OECD report rates Australian farmers as among the least subsidised and the country as one of the world’s most efficient agricultural producers. More that 80% of all sugar produced in Australia is exported as bulk raw sugar, making Australia the second largest raw sugar exporter in the world. The sugar industry is deregulated and exposed to market dynamics. Australia’s subsidies have instead moved to targeted direct payments, including payments to farms for natural disaster relief, income tax averaging and irrigation programs. Australia’s experience with agriculture regulatory practices could provide useful lessons for India and potentially be an important part of growing bilateral ties.

First, from the Indian perspective, it is important to acknowledge that there is a high level of political interference in the sugar sector, which is doing much harm and requires significant reform.

The Indian government’s heavy regulatory hand in the sugar industry is sustaining a vicious cycle: it sets cane and sugar prices, allocates production and export quotas, hands out subsidies, state-run banks give crop loans to farmers and production loans to mills. The government needs to deregulate the sugar sector, strong structural reforms where intervention is replaced with facilitation. For long-term health, the most important measure will be to link prices of sugar and cane, which is determined by market conditions of supply and demand.

As India integrates rapidly with the world economy, it would be wise for the government to conduct a major compatibility analysis of domestic laws and regulations with international trade obligations.

Crises can be an opportunity for change. In Maharashtra, about four per cent of the cropped area consumes 60% of irrigation water flows, largely because of sugarcane. The fall in sugar prices could encourage farmers to move into more water-efficient crops.

The WTO has become a battleground of subsidy disputes. To calculate the level of current subsidies, the WTO uses prices of 25 years ago (the average 1986-88 global prices). This is incongruous, as food prices have substantially changed since then. Recent prices should be used as reference. But developed countries currently refuse to agree to this. It is an opportune moment for the WTO to update subsidy rules.

It is equally urgent on the part of WTO to be cognisant of changing realities, giving the emerging economies and the developing world a greater say. In order to build a sustainable global sugar market, there needs to be a deeper understanding and acceptance of varied domestic conditions, which can be tabled in WTO negotiations for stronger viable long-term outcomes for all concerned.

There is a malaise in Western politics of which Australia’s instability is merely one symptom.
Mike Callaghan 13 Nov 2017 10:42

A stuff-up stops agreement in Vietnam but not hope of an ambitious final deal.