Book review: The Ministry for the Future

Putting the fate of the world in the hands of boring bureaucrats might not seem compelling – might just also be right. 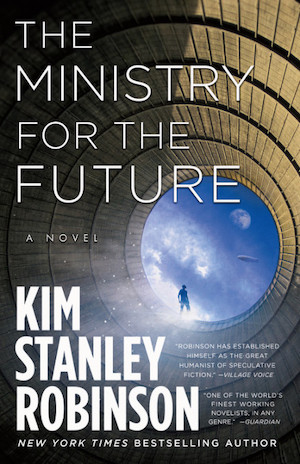 The Ministry for the Future is a novel set in the near future which describes the disastrous consequences of a warming planet and the steps humanity takes to mitigate them. It is ultimately an optimistic story about technological and political innovation. It is a novel with a distinct point of view about the economic system which has brought our natural environment to its current tipping point, and about how we can get ourselves out of it.

It is a novel for policy wonks, and not just because it describes policy – especially economic and monetary policy – in great detail, but because, as in other Kim Stanley Robinson novels, meetings and conferences hold centre stage in his story. A conference hosted by the Ministry of the Future – a Zurich-based international agency tasked with representing the interests of generations yet to be born – is described down to the plenary sessions and poster displays. When Mary Murphy, the novel’s protagonist and head of the Ministry, hosts a gathering of central bankers, we get a blow-by-blow account of the debate.

By contrast, when a bureaucrat working at the Ministry for the Future is assassinated by a suspected Russian drone, Robinson forgoes opportunities that few of his novelist peers would have missed. He doesn’t rhapsodise about exotic drone technology or breathlessly describe the victim’s last moments. Instead, the reader is given the news matter-of-factly after the event.

Robinson is not naive. He recognises the place of organised violence in world affairs, but it seems not to interest him as a storyteller. Perhaps he prefers not to pander to readers who might get off on reading lurid descriptions of non-state groups who use torpedoes to turn container vessels into instant coral reefs, or who bring down passenger jets by the dozen in order to trigger the collapse of the carbon-intensive airline industry.

Even when the town just down the road has been flattened by a hurricane, it can be damned hard to convince residents of your town that it might happen to them and maybe they should prepare for the worst.

Altogether it prompts a question: is a novel really the best choice as a vehicle for Robinson’s argument? The Ministry for the Future is so focused on policy, politics, science and engineering that you wonder whether a think-tank paper or a long Bill McKibben–style essay in the New York Review of Books (where McKibben reviewed The Ministry for the Future) might have been a better choice.

Ultimately, however, you have to conclude that Robinson made the right decision – this really is a novel, not just a policy think piece in disguise. The unlikely friendship between Murphy and radicalised environmentalist Frank May is compelling, something you only fully realise when the relationship ends well before the story meanders to a close. The description of a heatwave in India which opens the book is also vivid and terrifying.

But the main reason the novel was the right form for Robinson is that humans have a hard time imagining a future radically different to the present. As Robinson says in the novel, even when the town just down the road has been flattened by a hurricane, it can be damned hard to convince residents of your town that it might happen to them and maybe they should prepare for the worst. A novel, and in this case a science-fiction story, can fashion a plausible path from the present to the near future. Climate change seems more real, more immediate and more familiar to me now than it did before I read the book.

Still, it is hard to conclude that The Ministry for the Future is a complete success, because it can be so difficult for non-specialist readers to understand it. Early in the novel, one character voices the familiar quip that it is easier to imagine the end of the world than to imagine the end of capitalism. By the end, I concluded that Robinson’s mission was to undo this joke: the purpose of The Ministry for the Future is to make a post-capitalist world order seem not just plausible and realistic, but overwhelmingly beneficial for humanity and the planet. It’s just that, for readers who aren’t trained in economics and monetary theory, it will be very difficult to judge if Robinson has succeeded.

Riyadh’s man in Beirut is gone but seemingly not in some careful Saudi plot.
Mateo Szlapek-Sewillo 28 Jun 2022 16:18

No one living in a country that calls itself an American ally can ignore the perilous state of America’s social fabric.
Joseph Franco 1 Aug 2019 06:00

A June attack in Sulu could be a rediscovery of an almost forgotten cultural practice rather than ISIS mimicry.