Looking to past examples of state collapse offers a predictive guide to why nations will fail in the future.

Ed’s note: In response to a call on The Interpreter for reading suggestions in the event of a stint in Covid-19 related quarantine, Scott Robinson wrote that he’d recently revisited Why Nations Fail, by Daron Acemoglu and James A. Robinson. “I feel that we often forget the lessons of this seminal text, and so I have written a review of the book that captures the core messages, and what I think is missing,” Scott said. (The same authors also released a new book, The Narrow Corridor, in 2019.) 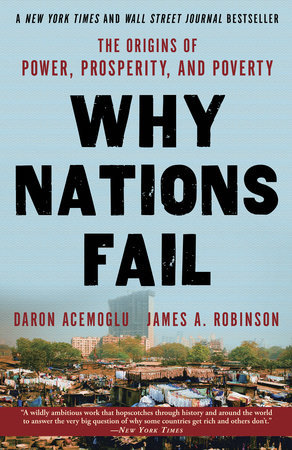 The cynical converse of this theory is that exclusive political institutions create what the authors label “extractive” economic institutions. Common forms are monopolies, slavery, serfdom, and feudalism. As wealth and power is concentrated, the ability of the holders of power to propagate and enforce these institutions increases. Elites, not accountable to the population, create and protect monopolies and resist any threats, such as creative destruction, to their supremacy. Policies that are inimical to the prosperity of the state are enacted. This enervates the population away from invention and investment, as the inevitable seizure of assets by the state make such pursuits abortive. Labelled the “vicious cycle”, the authors argue this as the principal reason why nations fail.

Acemoglu and Robinson employ a plethora of historical examples in support of their argument. These examples make up the bulk of pages. In citing the Western European example of why the industrial revolution occurred in England, they argue that the comparative weakness of the English crown, as compared to the Spanish and French crowns, led to the English crown having to cede powers to the parliament (through the English civil war and Glorious Revolution). Parliament, being a more inclusive institution than the alternative of absolutism of the divine right of kings, enacted policies that abolished monopolies, and granted and protected private property rights.

The mechanism through which this was assured, the authors argue, is that parliament was accountable to the people, and so people voted for a parliament that benefited the majority. The population then pursued invention and investments with surety, resulting in the industrial revolution.

The first reaction to this argument is to point out the flaws in the theory (lack of voting rights for women; only the wealthy, educated elite would vote or could get elected to parliament; susceptibility of people to rhetoric). However, these flaws are not fatal if cognisant of the alternative, the absolutism of the crown.

There are, however, two critiques of Why Nations Fail, and one seemingly unintended consequence that can be deduced from the book. The first is the oversight of the effect of trade interdependence. The second is the dismissal of geography.

Acemoglu and Robinson argue that culture, geography, or ignorance are not dominating factors in why nations fail. In concentrating on these three areas, they seem to preclude an obvious and overriding observation: that trade interdependence has a pivotal impact on how willing people are to centralise power to the state (a necessary precondition to inclusive political institutions), and critically affects the manner in which that power is exercised.

For example, if societal groups have an enduring and preeminent loyalty to only their immediate group, which may be limited for a multitude of reasons (geographic isolation, scarcity of resources), it is unlikely they will be willing or able collectively to centralise power alongside other isolated groups. Countries that consist of hundreds of such groups abound, especially in the Pacific. Unless and until interaction between these groups is frequent and mutually fruitful (trade interdependence), centralisation of political power is unlikely.

Accountability (the manner in which centralised power is exercised), is also affected by trade interdependence. If a particular isolated, self-sufficient group gains power over several isolated neighbouring groups, it is likely the powerful group will establish extractive institutions that benefit only themselves. As they do not interact frequently with or depend on the other groups, they are not accountable to them. The vicious cycle is guaranteed at the outset, given the lack of interdependence and lack of accountability.

The converse of this isolation is the concentration of several different groups that do not face such barriers to interaction, and that rely on trade with each other. Conjure a country rich in resources with several distinct groups that rely on trade with each other. Those on the coast would trade aquaculture products for resources produced by those inland, perhaps timber or stone. Given sufficient time, the economies of the separate groups would become intertwined, interdependent. It would be in the interest of any political authority to serve both their immediate group and those they trade with, as otherwise the valuable resources your group has come to rely on would be at risk. Inclusive institutions are far more likely to emerge under this scenario.

The second critique is authors’ dismissal of geography. As with the cultural example, intranational geographic isolation makes for a more suspicious peoples who are unwilling to centralise power. However, there is also the issue of geographic factors on the international scale. The prevalence of domesticable livestock, arable land, and plants that are able to be harvested make critical differences in the productivity of a people.

For example, the lack of horse, cattle, sheep, wheat, and barley in your country, no matter how altruistic and centralised your political systems are, will leave you at a disadvantage compared to a nation that has access to these resources. Higher productivity leads to more time dedicated to other pursuits (inventing, writing, thinking, creating permanent settlements). The importance of the absence of these resources is unduly discounted in the book.

Finally comes what can be deduced from the discussion, even if unintended. The authors have attempted to explain historically why nations have failed. In their thesis they rightly dismiss the factors of culture and ignorance, and discount the importance of trade interdependence and geography. The modern world, however, is far less constrained by these limitations – livestock and crops can be grown around the world, thanks to irrigation, people are able to travel to any number of nations, and global trade is indispensably intertwined. This largely removes these limitations.

So although Acemoglu and Robinson have attempted to explain the historical reasons nations have failed in the past, they have paradoxically provided both a predictive paper on why nations will fail in the future and a blueprint for prosperity for contemporary policy practitioners who are conversant with development theory.

In a sentence, it is those countries that establish inclusive political and economic institutions that will succeed.

Previous Article
The uncertain fate of .org
Next Article
Iran: Sanctions vs sympathy