Consulting people with disabilities about their experience and needs is a first step in leading preparations. 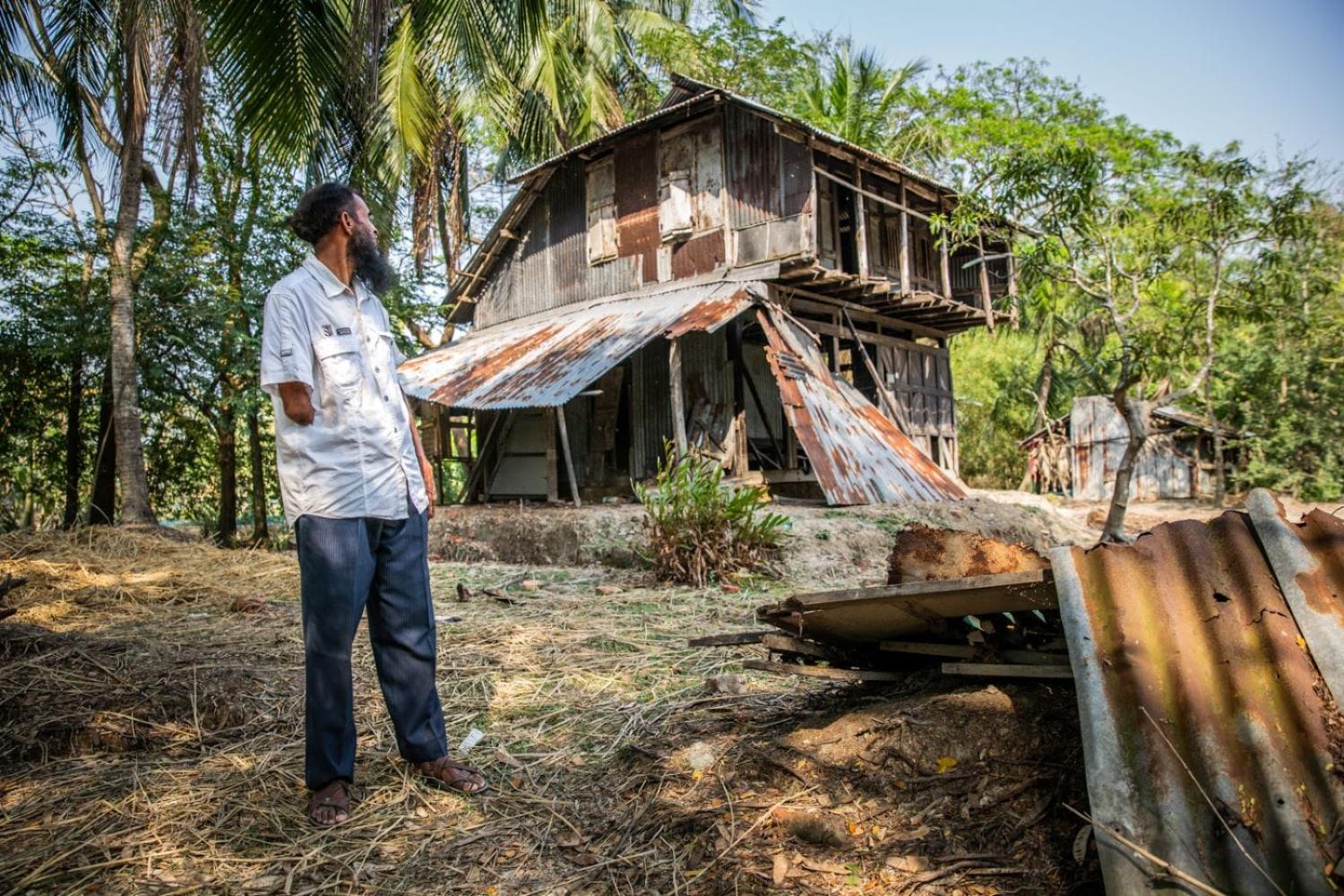 Shahadat in front of his home that was destroyed in Cyclone Sidr in Bangladesh, 2007 (©Erin Johnson/CBM Australia)
Published 16 Sep 2022     Follow @Renee_C_Dodds

Imagine if the only way to find out about a tsunami coming towards your seaside village was via a loud warning siren – but you are Deaf and cannot hear it. Or that the only buses to transport your community in the event of an evacuation could not carry your wheelchair, and you had to leave it behind.

One in six people across the Asia-Pacific have disabilities, and these are just some of the barriers they face.

Located in one of the most disaster-prone regions of the world, Australia is increasingly at the forefront of global conversations around disasters, and this month will host the Asia-Pacific Ministerial Conference on Disaster Risk Reduction (APMCDRR).

People with disabilities have high levels of knowledge and motivation to be involved in disaster preparedness, but are not yet being systematically included in wider disaster risk reduction activities.

Disasters have a disproportionate impact on people with disabilities, who are up to four times more likely to be injured or to die during a disaster. They also experience multiple disadvantages resulting from the interplay of poverty and discrimination on the basis of disability, such as social exclusion and lack of basic services and information. They have historically not been invited to the table where policies and programs to prevent and reduce loss of life in the event of an emergency are decided, despite living with heightened risks.

Since the implementation of the Sendai Framework in 2015, some positive steps have been achieved in implementing disability-inclusive disaster risk reduction processes. Currently, about 118 countries have national and local disaster risk reduction strategies in accordance with the Sendai Framework commitments. Policy commitments to disability inclusion were introduced in 81 countries as part of disaster risk reduction regulatory frameworks, strategies and policies, and this has led to increased provision of accessible risk information and infrastructure, although gaps remain. Research shows that people with disabilities across Asia and the Pacific continue to be frequently excluded from disaster preparedness activities.

In 2021, a study across eight countries in Africa, Asia and South and Central America found that while there was significant increase in awareness of the importance of disability inclusion, there was a lack of practical knowledge and capacities on how to implement disability-inclusive disaster risk reduction processes. Problems identified included lack of disaggregated data and that efforts were largely reactive or project-based, resulting in poor sustainability. Similarly in 2022, a joint study by CBM Global’s Inclusion Advisory Group and the Humanitarian Advisory Group looking at disaster risk reduction practice in Vanuatu and Solomon Islands found that greater inclusion in disaster response requires change to occur at multiple levels of the system, from communities through to policy.

In the Pacific region, the Australian Humanitarian Partnership (AHP) was formed between the Australian government and Australian NGOs, focusing on disaster preparedness and response. This innovative program uses local Pacific-based partners to deliver the $50 million program with specific emphasis on the inclusion of women, people with disabilities and faith-based organisations in disaster preparedness. A mid-term evaluation in 2020 found that although there were some good initiatives for people with disabilities within the AHP, overall they were still being excluded from disaster risk reduction activities.

To help accelerate disability-inclusive disaster risk reduction, the Pacific Disability Forum, the International Disability Alliance, and CBM Global’s Inclusion Advisory Group, with support from AHP, worked together to conduct consultations across Asia and the Pacific, to seek the perspectives, experiences and priorities of the diverse range of people with disabilities in relation to disaster preparedness, response and recovery. This consultation project has found that people with disabilities have high levels of knowledge and motivation to be involved in disaster preparedness, but are not yet being systematically included in wider disaster risk reduction activities.

Upcoming regional gatherings such as the APMCDRR offer a crucial opportunity to consider these perspectives, and to support people with disabilities to actively participate and partner as key contributors. Disability inclusion cannot be considered an optional add-on for disaster risk reduction; it is fundamental to effectiveness and is critical to achieve the objectives of the Sendai Framework.

Modelling shows that the ideal US tariff on Chinese imports would be 5-10% – could this be the trade compromise for a dealmaker like Trump?
Alexandre Dayant 28 Aug 2019 11:30

Australia stumbles on the step up, plus links and stories from the Pacific islands region.
Greg Earl 2 Nov 2017 14:22