In dull midterm elections, Manila is a thriller

Another former actor-turned-politician has stolen the show and injected the spark of change into Philippines politics. 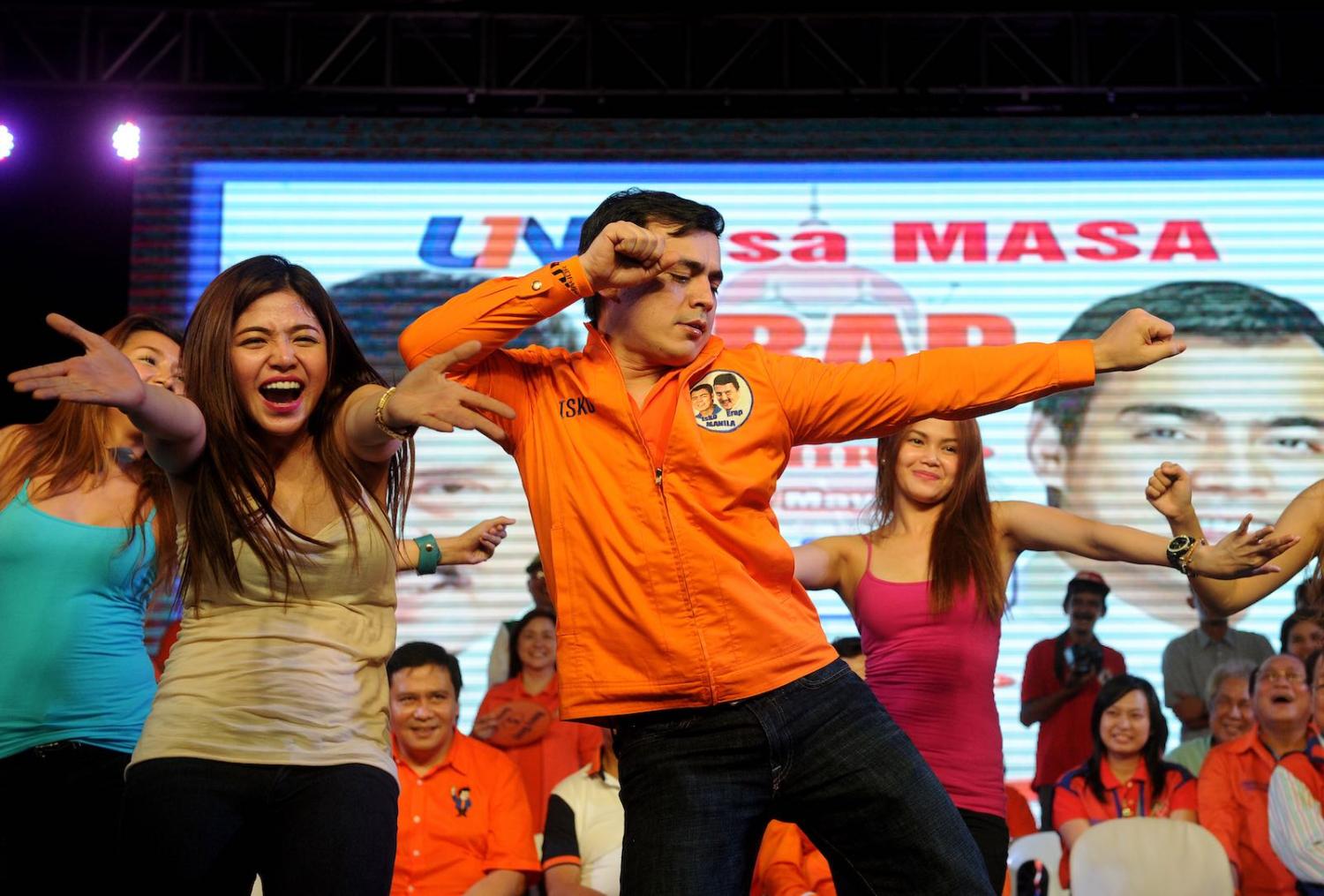 Different moves: back in 2013, Isko Moreno, centre, ran with Joseph Estrada, but this week defeated him to become Manila’s mayor (Photo: Noel Celis via Getty)
Published 15 May 2019     Follow @dmkmtoday

In Manila’s most densely-populated and poorest district of Tondo the fight for the mayor of the city is a loud one. For 10 hours, voters line the halls of Manuel L. Quezon Elementary School in the middle of the district. Hundreds of voters will have their say in the Philippines’ midterm elections, electing senators, congressional members and local representatives. But in this schoolyard, it’s all about the Mayor of Manila.

Francisco Domagoso, a 44-year-old better known as Isko Moreno, passed through the gates bright and early to cast his vote. Into the blindingly sunny afternoon, children accompanying their parents and living nearby will shout his name and wave fan-shaped hand-outs emblazoned with his face. By evening he will have beaten out two former bosses to become the 27th mayor of the City of Manila.

One is a huge scalp. Incumbent mayor Joseph Estrada, 82, was infamously the target of “EDSA 2”, a four-day protest in 2001 which eventually saw him forced from the country’s presidency over allegations of massive corruption. That seemingly did not matter to the voters of Manila who in 2013 and again in 2016 elected him mayor. Polling had him as the favourite for a third term. Electoral regulations say this would be his final consecutive term if he were re-elected.

Alfredo Lim, 89, hoped that a run with the PDP-Laban, the party controlled by Philippines President Rodrigo Duterte, would send him back to City Hall where he has ruled twice before, from 1992 to 1998 and again from 2004 to 2007. Rumours circulated for weeks that Lim would drop from the race. But as he placed his vote in the box at the neighbouring Rosauro Almario Elementary School, Lim said he would see it through to the end. His polling station was one of hundreds across the country where the controversial vote counting machines suffered a glitch. If he saw that as an omen, he didn’t let on.

Isko Moreno knows both his challengers well. He has served repeatedly as the city’s vice mayor and, in typically complicated Filipino style, under both Lim and Estrada. He left his post in 2016 for a failed senate contest but was the only candidate with a full slate of councillors in his arsenal come nomination time last October. His vice mayor running mate, Maria Sheilah Honey Lacuna-Pangan, had won in 2016 on the Estrada ticket.

Still, polling during the campaign had Estrada outpacing his former protege ­– and leaving Lim in the dust – just days out from the vote.

Moreno is Manila’s bridesmaid no more. As of unofficial results available on Tuesday this week, he commands a near 150,000 vote lead over Estrada, boasting 347,982 votes. Estrada is likely to finish with just over 200,000, while Lim is limping towards 150,000. Vice mayors are elected separately, and Honey Lacuna can expect to stay in office.

Moreno’s win in a season of Philippines midterm elections otherwise dominated by talk of a pro-Duterte senate and what that means for the future of the country is a rare moment of exciting change. While he’s clearly part of the establishment, Isko Moreno stands apart from the men he defeated.

He made a career in the 1990s as an actor in “bomba” films, an unsubtle genre of softcore and sexed up cinema. His childhood, however, is more relatable for the punters of Tondo who have turned out en masse at primary schools across the district to show their support.

Moreno’s win in a season of Philippines midterm elections otherwise dominated by talk of a pro-Duterte senate and what that means for the future of the country is a rare moment of exciting change.

Raised in the district, Isko Moreno made money for his family as a child collecting trash to be resold and food scraps to be reheated. He’s leaned heavily on his rags-to-riches story throughout the campaign. Calling himself a real Manileño, he made repeated digs at Estrada who he says lived most of his life outside of the city despite being also born in Tondo.

Reflecting frequently on the past failures of city administrations – broken promises of fixing failing infrastructure and resolving rampant poverty and crime particularly – his own complicity has been explained away. He had no opportunity for a formal education in Manila and has spent his two decades working for the city educating himself in the ways of governance, he says. Now, he is ready to tackle the big problems no other leader has addressed. It’s a message that clearly resonates.

While the incoming senate will be made up of Duterte allies keen to support his agenda, the City of Manila could be readying for a fight. Manila, and especially Tondo, has been home to the bulk of the thousands of deaths in the president’s war on drugs. Moreno stops short of saying the deaths would end under his watch, relying on a familiar trope of police self-defence. Still, “only God has the right to take a life,” he told Rappler just prior to the election.

Elsewhere for the city, he’s aiming big. His policy agenda looks nine years ahead with the assumption he would be returned for an additional two terms. This entails a two-pronged approach. First, massive infrastructure expenditure. Crucially, this would include low-cost housing for the city’s infamous slums as well as revitalisation of areas around the Manila Bay. He looks south for social policy inspiration and plans to bring Makati City’s education and healthcare standards to his own patch.

Achieving this would be against the odds. The city’s budget has been infamously troubled, although Estrada assures that it is now in the black after settling massive debts. It’s a risk the voters of Manila are overwhelmingly happy to take.

Filipino voters go to the polls to choose who will govern them but not necessarily how they will be governed.
Mustafa Aryan 26 Sep 2019 09:00

Ghani’s ranks are depleted with the exodus of erstwhile influential allies, but he remains a frontrunner with Abdullah.