A decoupling world will still need an old-style cooperative rescue service to repair the economic minefields. 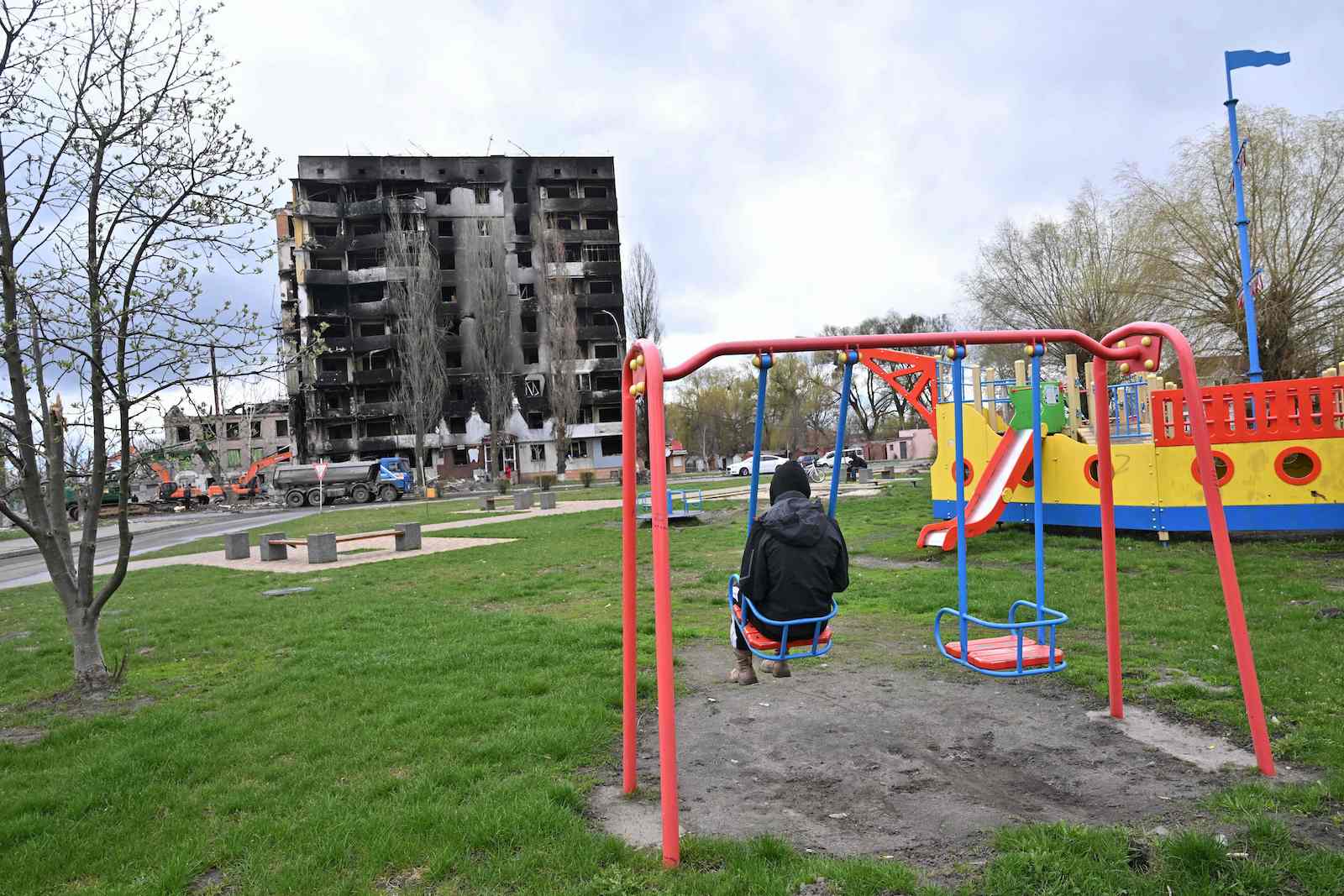 A playground opposite an apartment block destroyed in a bombardment in the Ukrainian town of Borodianka (Sergei Supinsky/AFP via Getty Images)
Published 21 Apr 2022 13:00   0 Comments       Follow @Greg__Earl

That grandee of American economic statecraft Robert Zoellick made an uncomfortable return to public life this month by being lampooned for sitting on the Twitter board for four years but never managing to tweet.

Nevertheless, the one-time Republican consiglieri has provided an interesting way of looking at this week’s annual International Monetary Fund/World Bank meetings by arguing that the United States will still have to deal with a changing world economic power balance despite the swift success of its leadership of the sanctions campaign against Russia.

Writing in Foreign Affairs magazine, Zoellick says: “Even though the United States led the creation of the major international organizations, Washington rarely reflects on their practical uses and devotes little effort to their renewal … They have fostered prosperity for decades, and if properly revived, they can continue to do so for decades to come.”

More controversially given China’s vacillation over the Ukraine war, he argues: “China’s rising power has become Washington’s greatest external preoccupation, although the United States has yet to develop a clear concept of a system that can peacefully accommodate both countries … Economic diplomacy should accept the reality of perpetual dynamism, which differs from the expectation of perpetual conflict and the dream of perpetual peace.”

The debate about whether sanctions will erode the role of US$ as the reserve currency is more diffuse than binary.

Twitter raider Elon Musk spoke volumes with his simple ! response to Zoellick’s twitter ineptitude as he stepped up his bid to take over the social media company from what he sees as a new woke elite that even these days encompasses a former World Bank president. But the old school Foreign Affairs essay still provides a useful lens for deciphering the IMF’s somewhat self-reverential existential warning in its annual World Economic Outlook that “geopolitical tensions threaten the rules-based frameworks that have governed international economic relations since World War II”.

The Biden administration kicked off this week’s Washington meetings by taking a firm stand against the idea the sanctions may undermine the US$-led global financial system – and thus potentially hurt American power in the longer term.

Treasury deputy secretary Wally Adeyemo told a Peterson Institute seminar that “the actions we have taken in response to Russia’s invasion of Ukraine are less about the centrality of the dollar and more about the impact of multilateral action. There have been few times in the last century when the operations and details of the international financial system have been so salient, especially during a military conflict.” He rejected suggestions the sanctions would encourage adversaries to build a separate financial system because they had been shown not only “how indispensable this system is” but also “how costly it is to be excluded from it.”

And he reportedly stepped up the financial war in discussions later, declaring:

The dollar is going to remain ubiquitous, even for countries that are attempting to escape it.

But the debate about whether sanctions will erode the role of US$ as the reserve currency is more diffuse than binary. At one end, Barry Eichengreen and others have argued that a decline is inevitable. But the beneficiary currencies will likely be “friendly” alternatives such as the Australian dollar as much as competitors such as the Chinese yuan.

At the other end of the debate, as noted here previously,  Credit Suisse strategist Zoltan Pozsar has argued that commodities may partly replace currencies in a new Bretton Woods 3 global financial system as countries try to escape the US financial dragnet. And countries from India to Indonesia have indeed mooted buying Russian oil without using the US$ in response to the Ukraine sanctions.

The WEO only tentatively steps into this contested territory by suggesting “a segmentation of global reserve assets and emergence of alternative cross-border payment systems could arise as a result of fragmented production blocks.” That maybe because it has a more immediate currency crisis looming as the Ukraine war has intensified already severe tensions in the world economy with the US Federal Reserve Board move towards higher interest rates to curb inflation as much of the developing world is still struggling with the debt taken on during the pandemic.

The IMF spends much space arguing that the old globalisation institutions are still needed despite the fragmentary fissures from the Ukraine war to help stressed poor countries with measures such as food aid and acceptance of capital controls.

But the more fascinating currency tension within the pro-sanctions coalition is in Japan where the yen is tumbling towards a 20 year low versus the dollar, due to high energy prices from the war and the rising interest rates in its close ally the United States.

So, while some countries led by the United States were focused on stopping Russian participation in Wednesday’s Group of 20 (G20) finance ministers’ meeting (see below), Japan’s officials seemed keen on the meeting proceeding so currency imbalances and intervention could be discussed.

Defining the parts of a decoupled world in the context of the Ukraine sanctions is complicated by which of many measures is used: for example, raw numbers in the United General Assembly votes, world population share or world GDP.

Adeyemo used a particular definition on Monday declaring the United States was leading a group of more than 30 countries which represented “50 percent of the global economy, issuers of the world’s most widely used convertible currencies, and producers of the world’s cutting-edge technologies.” Australia sits neatly there.

The IMF growth projections provide a possible hip pocket nerve insight into feelings about a prolonged war. Emerging market and middle-income countries have seen a cumulative 1.3 percentage points cut from their economic growth outlook over the next two years since the IMF’s January forecasts. Prominent sanctions sceptic democracies (and G20 members) India and Mexico have each lost one percentage point.

The Ukraine war has only underlined the need for cooperation on a global commons issue by revealing a gap between falling investment in fossil fuels and insufficient growth in renewable energy investment.

On the other hand, the pro-sanctions United States has only seen a 0.6 percentage point loss of projected growth since the IMF’s January update. But this possible economic pain explanation for fence sitting only goes so far because those other large sanctions sceptic emerging market democracies (and G20 members) Brazil and South Africa have not suffered significant growth downgrades.

And in the IMF’s more worst-case scenario of escalated sanctions and war, the European Union area emerges as the biggest economic loser with a three percentage point loss of growth in 2023 compared with half that for emerging markets.

What Financial Times commentator Gideon Rachman has contrasted as a Western “axis of outrage” versus a Global South “axis of indifference” over Ukraine seems to reflect more than just short-term economics.

The prospect of the IMF being left to clean up the economic damage from a fragmented world emerges throughout this first wide-ranging assessment of the global economy since the Russian invasion.

For example, on the truly existential issue of climate change IMF World Economic Outlook notes how the Ukraine war has only underlined the need for cooperation on a global commons issue by revealing a gap between falling investment in fossil fuels and insufficient growth in renewable energy investment. And so:

A coordinated climate effort among fossil fuel consumer and producer countries and divestment from fossil fuels at a pace commensurate with the speed of adoption of renewable energy would help reduce the risk of high and volatile energy prices.

And the IMF has doubled down on the value of global supply chains in trade despite the continued technological decoupling by the United States from China and Adeyemo promising to now “take apart Russia’s war machine, piece by piece, by disrupting their military industrial complex and its supply chains.”

Contrast that with the IMF economists arguing: “Increasing supply chain resilience is important for dealing with not only health emergencies like the pandemic, but also other types of shocks such as  the war in Ukraine”. And they go on to argue “reshoring policies could leave economies more exposed to supply disruptions, not less”.

While the economists can push the envelope on these issues, the IMF members still managed to formally agree before the meetings that “multilateral cooperation and dialogue remain essential to defuse geopolitical tensions and avoid fragmentation, end the pandemic, and respond to the myriad challenges facing our interconnected world, particularly climate change”.

The first test of this boilerplate diplomatic rhetoric came on Wednesday when the G20 finance ministers were reportedly split nine/nine on the Russia issue (not counting the Russian and European Union votes). In the end the ministers from the United States, Canada and the United Kingdom walked out when the Russians spoke and Australian caretaker government officials turned off their screens from a distance.

But it may say something about how power is slipping from Zoellick’s Washington Consensus generation that it was left to a rising politician from the Global South to define the future of one of the newest parts of the troubled architecture of globalisation in a fragmenting world.

Indonesia’s finance minister Sri Mulyani Indrawati, whose country is the G20 chair this year, said: “In order for us to be able to recover together ... we need more and even stronger cooperation. The G20 is still ... the premier forum for all of us to be able to discuss and talk about all the issues.”