President Biden moves to suspend vaccine patents, RCEP ramps up, IA-CEPA gets a lesson and US dollar reserves tank. 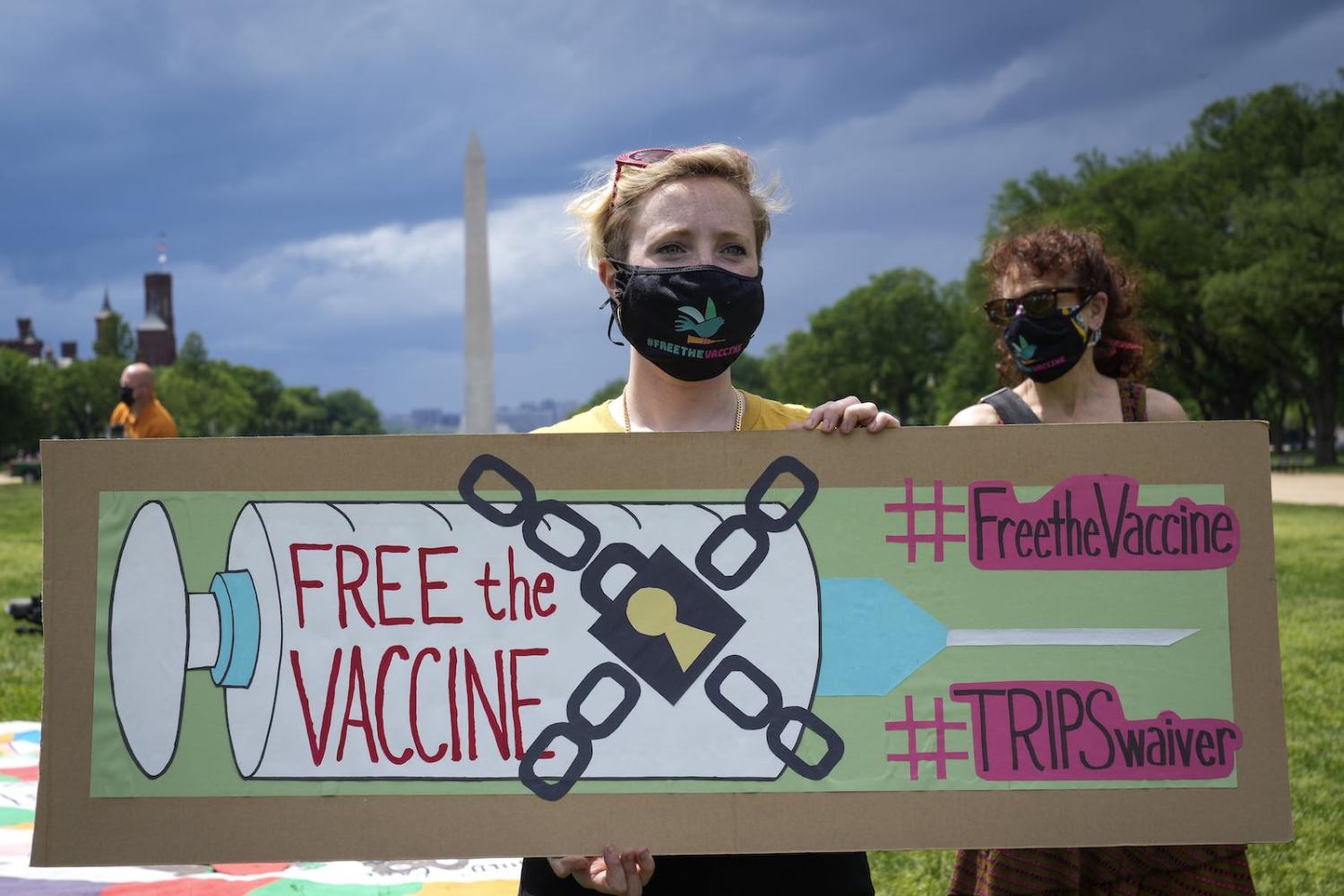 Demonstration in support of global access to Covid-19 vaccines, 5 May in Washington (Drew Angerer/Getty Images)
Published 6 May 2021     Follow @Greg__Earl

First it was new carbon emission cuts, and then a global minimum corporate tax. But it is hard to beat the Biden administration’s move to shaft the pharmaceutical industry lobby over vaccine patents for putting the US back at the heart of global public policy.

The devil will be in the detail of the temporary suspension of intellectual property rights for Covid-19 vaccines and how long it takes to get through the fractured World Trade Organisation. But as US Trade Representative Katherine Tai announced: “This is a global health crisis, and the extraordinary circumstances of the Covid-19 pandemic call for extraordinary measures.”

This idea has been circulating around the WTO since October, backed mostly by developing countries but opposed by the countries that host large pharmaceutical manufacturers.

A patent waiver could possibly even see Chinese vaccine manufacturers being allowed to reproduce leading Western vaccines for limited distribution.

And that included the Morrison government, which had signalled that Australia would oppose a patent waiver unless there were strong provisions to protect the money invested in research.

The pharmaceutical industry says the move will only create more confusion about the origin and quality of vaccines and set back the process of combatting Covid in poor countries.

But US “Big Pharma” companies have traditionally played an outsize role in US trade policy – such as pressuring Australia’s drug regulation regime during the negotiation of the original Trans-Pacific Partnership. So, this decision underlines just how much the Biden team is prepared to break with recent conventional wisdom to regain global credibility.

And a patent waiver could possibly even see Chinese vaccine manufacturers being allowed to reproduce leading Western vaccines for limited distribution. So, it seems to show how confident the administration is about winning the battle for hearts and minds with nimble diplomacy.

And the 15-member now East Asian (without India) trade group has been overshadowed in recent months by newer developments. The Quad grouping has put supply chains at the top of its economic agenda, and the Biden administration’s “foreign policy for the middle class” approach elevates standards or services over conventional goods trade liberalisation.

Nevertheless, while the Federal Parliament’s treaty committee is still getting onto the RCEP ratification task, Japan last week joined China, Singapore and Thailand in completing that process. And, predictably, the Japanese government reportedly made the heroic claim that the agreement would boost the country’s GDP by 2.75%.

But despite perceptions that RCEP is a China-led regional trade initiative, the Australian government can draw some fresh enthusiasm for it from new modelling by the Monetary Authority of Singapore (MAS) and the ASEAN+3 Macroeconomic Research Office.

It identifies Australia as a relatively significant and fast beneficiary of the agreement in contrast to the benchmark Petri-Plummer modelling and the conventional wisdom that Australia does not gain much without India in. Australian (and New Zealand) GDP is forecast to rise 0.5% over 20 years due to the deal, which is both higher and more front-loaded timewise than for the other North and Southeast Asian sub-groups. The study says:

These relatively large gains partly reflect the significant reductions in tariffs on primary products exported by these economies. Large though these impacts are, the potential benefits to Australia and New Zealand could still be understated by these estimates.

And it still doesn’t include some sectors where Australia has comparative advantages, including finance, telecommunications and e-commerce.

These modelling figures are, of course, mere rounding errors in overall medium-term economic growth. But they are better than the Petri-Plummer modelling, which shows virtually nonexistent trade liberalisation benefits for Australia, something the government has conveniently ignored when talking up the RCEP.

They also undermine the China dominance narrative on RCEP – which prompted India’s exit – by reaffirming that from a trade liberalisation perspective, Japan, South Korea and others do better than China.

The MAS study argues that beyond the tariff liberalisation benefits, RCEP should also improve the operation of supply chains across the region through common rules of origin for trade.

However, its parallel attempt to quantify the impact of these sort of embedded changes in existing Southeast Asian–based trade agreements – including the ASEAN-Australia-NZ Free Trade Agreement (AANZFTA) – is less positive for Australia. This work shows that the ASEAN countries benefitted more from their regional trade agreements with China and South Korea than the competing agreements with Japan and Australia.

It is an interesting finding when these countries are in the midst of a battle for their hearts, minds and wallets from the rival superpowers. It remains to be seen how much a more positive economic relationship with China will flow through to their security choices,

One of the striking aspects of the revitalisation of Australia’s economic relationship with Indonesia via the new bilateral trade deal is the potential for education and training to play a leading role.

It was notable that the only commercial venture announced during President Joko Widodo’s visit to Australia a year ago was Monash University’s approval as the first foreign institution to set up a campus in Indonesia.

Mining, beef exports and tourism will still remain larger for longer. But whether that high-profile university breakthrough will be followed by a more diverse tail of smaller skills-training providers will be a key measure of the mutually beneficial quality of the Indonesia-Australia Comprehensive Economic Partnership Agreement.

One of the challenges has always been that the responsibility for ensuring Indonesia makes the most of the demographic dividend from having a youthful population has been split across ill-coordinated ministries for education, research, religion, industry and labour.

So last week’s decision to merge the research and technology ministry with the education and culture ministry may now have a big influence on how well the IA-CEPA education and training changes are implemented.

At face value, a merger might seem to make the system better coordinated. But it appears to have been driven by the need to keep ministerial numbers down in a cabinet shake-up, rather than Widodo’s previous declared interest in shaking up education. The ministries also have quite different cultural origins, and critics say that research funding will now be more politicised at a time when Indonesia needs to move up the industrial development ladder to remain competitive.

And the new combined minister Nadiem Makarim, who was a surprise recruit to the education job last year from the ecommerce start-up sector, has reportedly struggled to manage the shift to a bureaucratic job.

The move was not tactical. It substantively erases policy-making functions in the research and technology field and adds more administrative work to the ministry.

But it is also an example of the pitfalls Australia faces in diversifying its trade from resources to China to services in a much wider arc of countries.

US dollar reserves held by central banks fell to their lowest level in 25 years at the end of last year, according to an International Monetary Fund (IMF) survey, potentially raising new questions about the future of a key arm of US global power.

The dollar share fell 12 percentage points to 59% over that time, while the euro remained fairly constant at 20%, and “other” currencies which include the Australian dollar and the Chinese renminbi collectively climbed to 9%, overtaking the once-powerful yen and pound.

This is certainly only a slow-moving shift in global financial power. But IMF economists have nonetheless been prompted to observe:

The fact that the value of the US dollar has been broadly unchanged, while the US dollar’s share of global reserves has declined, indicates that central banks have indeed been shifting gradually away from the US dollar.

Apart from the geo-economics of the US becoming a relatively smaller part of the global economy, the US Federal Reserve Board has also been facing questions about whether the greenback will suffer a loss of clout from the rise of cryptocurrencies and China’s own digital currency, which is now being tested.

So, it was interesting to see Fed Chair Jerome Powell last week draw on the Biden administration mantra of competition rather than confrontation with China in defending one of his country’s most valuable international assets, saying:

We’re the world's reserve currency … that’s because of our rule of law, our democratic institutions, which are the best in the world, our economy, our industrious people, all the things that make the United States the United States.

Powell acknowledged that the Fed needed to take digital currencies more seriously. But he certainly wasn’t buying the most significant official competitor so far:

The currency that's being used in China is not one that would work here. It’s one that really allows the government to see every payment that’s used for which it is used in real time.

Is the AIIB still ‘lean, clean and green’?

It's a good moment to ask whether the AIIB is holding true to the most central and repeated claim that the bank will be 'lean, clean and green'.
Michael Altman-Lupu , Matthew Bugher 15 Apr 2021 05:00

The US Department of Homeland Security has begun fingerprinting and photographing refugees on Manus Island as part of the US-Australia refugee deal.