Joko Widodo’s Australian visit is an opportunity to call out the worsening human rights situation in Indonesia. 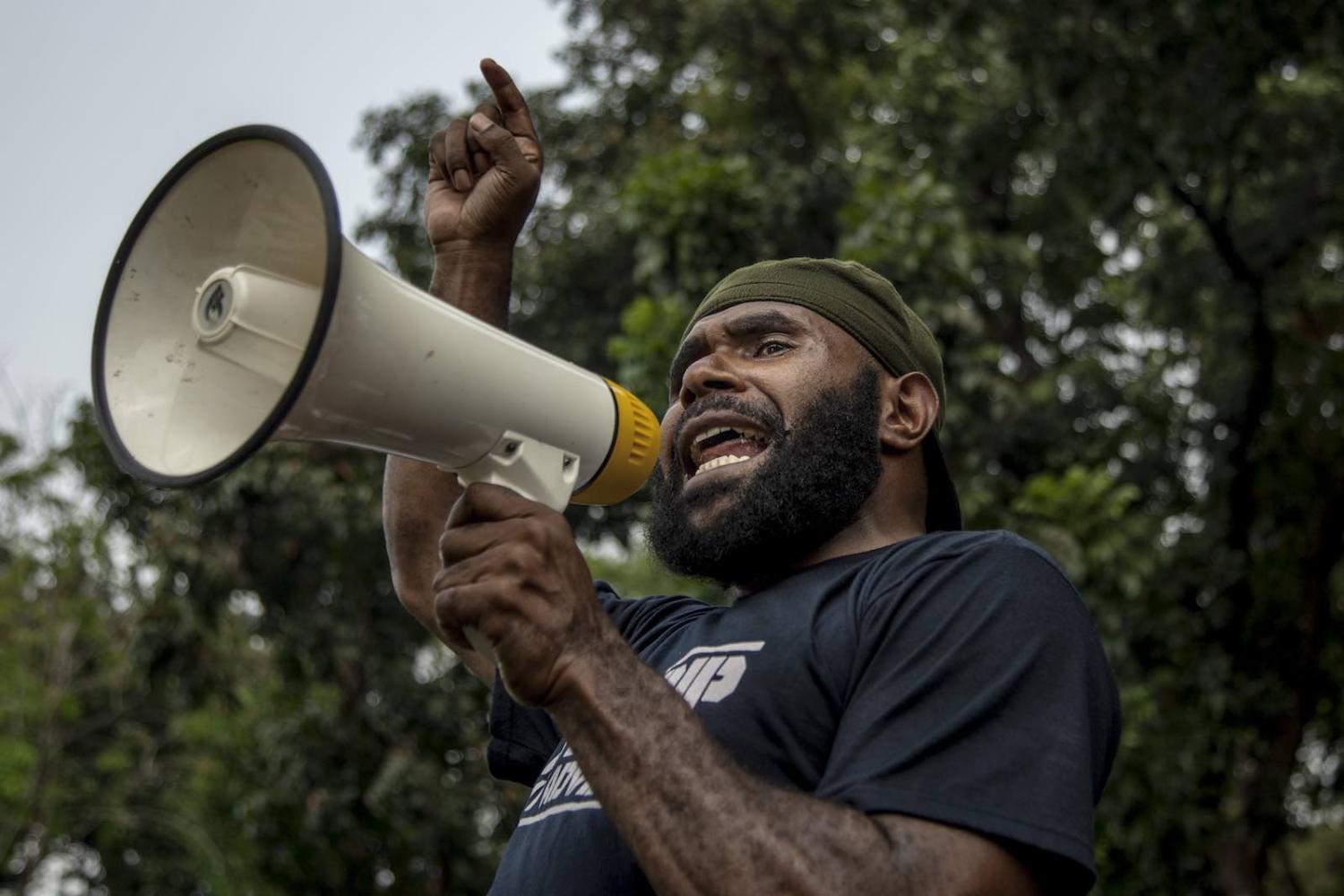 Protest calling for an end to discrimination against the people of Papua, August 2019 in Jakarta (Photo: Mas Agung Wilis/NurPhoto via Getty Images)
Published 10 Feb 2020     Follow @pearsonelaine

On 10 February, Indonesian President Joko Widodo (“Jokowi”) will address Australia’s parliament. Indonesia is often referred to as the democratic success story of Southeast Asia and a model of Muslim democracy, yet it has been responsible for significant backsliding on human rights in recent years. This backsliding is serious enough that Australian leaders should ask Jokowi some hard questions during his Canberra visit. Here are five current human rights concerns that should be included:

Indonesia has been working on updating its colonial-era criminal code for decades. Now Indonesia’s parliament is discussing a new draft code with a raft of problematic provisions that would be disastrous for women and minorities, and for many Indonesians in general.

The new code proposes to punish extramarital sex with up to one year in jail and unmarried couples who live together with six months. Consensual sex between adults should never be a crime, and this law would disproportionately affect lesbian, gay, bisexual, and transgender (LGBT) people. While it does not mention same-sex conduct, same-sex relationships are not legally recognised in Indonesia, so it would effectively criminalise all same-sex conduct.

The code also would criminalise disseminating information about contraception, as well as criminalising some abortions. It would expand the toxic blasphemy law, which has been used to target religious minorities.

While Jokowi delayed the vote following mass protests against the proposed code last year, he should show leadership in ensuring that abusive provisions are removed. These provisions not only violate Indonesia’s human rights obligations, but will help foment hatred and discrimination against certain groups.

While some gay and lesbian Australians might not think twice about visiting Bali for a holiday, they should be concerned about the rise in hateful rhetoric, discrimination, and violence against LGBT people in Indonesia. Since early 2016, Indonesian politicians, government officials, and state offices have issued anti-LGBT statements – with calls for criminalisation, “cures” for homosexuality, censorship of information about LGBT people and suppression of positive reporting on their activities.

The government’s failure to halt arbitrary and unlawful raids by police and militant Islamists on private LGBT gatherings has effectively derailed public health outreach efforts to vulnerable populations. Last November, Indonesia’s ombudsman revealed that a number of ministries openly discriminate against LGBT people in job postings, saying that applicants “must not be mentally disabled and not show sexual orientation or behavioural deviations.”

The 2019 Pacific Island Forum Leaders’ statement, signed by all Pacific nations including Australia, expressed concern about “reported escalation in violence and continued allegations of human rights abuses in West Papua (Papua)” and urged the Indonesian government to honour Jokowi’s 2018 promise to allow the UN Human Rights Office to visit the two provinces and report on the situation before the next Pacific Island Forum’s leaders meeting this year.

But the UN Human Rights Office has still had no access to West Papua. And last year’s protests and violence, in which at least 53 people – both Papuans and migrants from other parts of Indonesia – were killed and hundreds more wounded, make the visit even more urgent. Precise estimates on deaths are difficult because access to Papua is limited.

Indonesian authorities have detained and charged at least 22 people for peaceful acts of free expression – mainly for raising the pro-Papuan independence Morning Star flag or speaking about “West Papua independence” in public. They are charged with treason (makar) and face up to 20 years in prison.

Indonesia’s blasphemy law punishes deviations from the central tenets of Indonesia’s six officially recognized religions – Islam, Protestantism, Catholicism, Hinduism, Buddhism, and Confucianism – with up to five years in prison. The blasphemy law is alarmingly used for political purposes and to target religious minorities.

The highest-profile victim of the law was the former Jakarta governor, Basuki Purnama (Ahok), sentenced in 2017 to two years in prison for allegedly defaming Islam in a speech to fishermen on Seribu Islands, near Jakarta. More recently, a woman was sentenced to 18 months in prison for complaining about the level of a mosque’s loudspeaker.

These are among a number of worrying signs of growing efforts by the government to impose religious conservatism. Local and provincial governments in at least five provinces have introduced decrees mandating that women and girls must wear the hijab in civic buildings, universities, and schools. Schools have enforced these regulations in more than a dozen provinces, even on non-Muslim students.

What would happen if an Australian soldier who had been discharged from the military for human rights abuses and disobeying orders were to become our Defence Minister? That is exactly what has happened in Indonesia, when Jokowi appointed his presidential opponent, Prabowo Subianto, to the post last year.

The Indonesian army dismissed Prabowo in 1998 over allegations of kidnapping of more than two dozen activists in 1997–98 during the fall of Suharto. He has also been accused of abuses in East Timor during his time there as a commander of Kopassus, the military special forces unit. Indonesia’s military has a long record of impunity for killings and enforced disappearances. That is sadly unlikely to improve under Prabowo’s leadership of one of Indonesia’s most powerful institutions.

Now is the time to bring these issues up. President Jokowi has another four years to take concrete steps to protect the human rights and freedoms of all Indonesians. But unless he takes steps to stop the backsliding, Indonesia may face much bigger social and political crises.

As Indonesia takes the G20 presidency solving the country’s food security crisis should be top of the agenda.
Robert E Kelly 13 Jun 2017 08:36

A division between politics and economics, especially the biggest firms, end the constant temptation provided by developmentalism.
Greg Earl 29 Mar 2018 14:30