How is an advanced Australia faring in the Asian century?

The power of proximity has long surpassed the “tyranny of distance” in Australian trade relations. 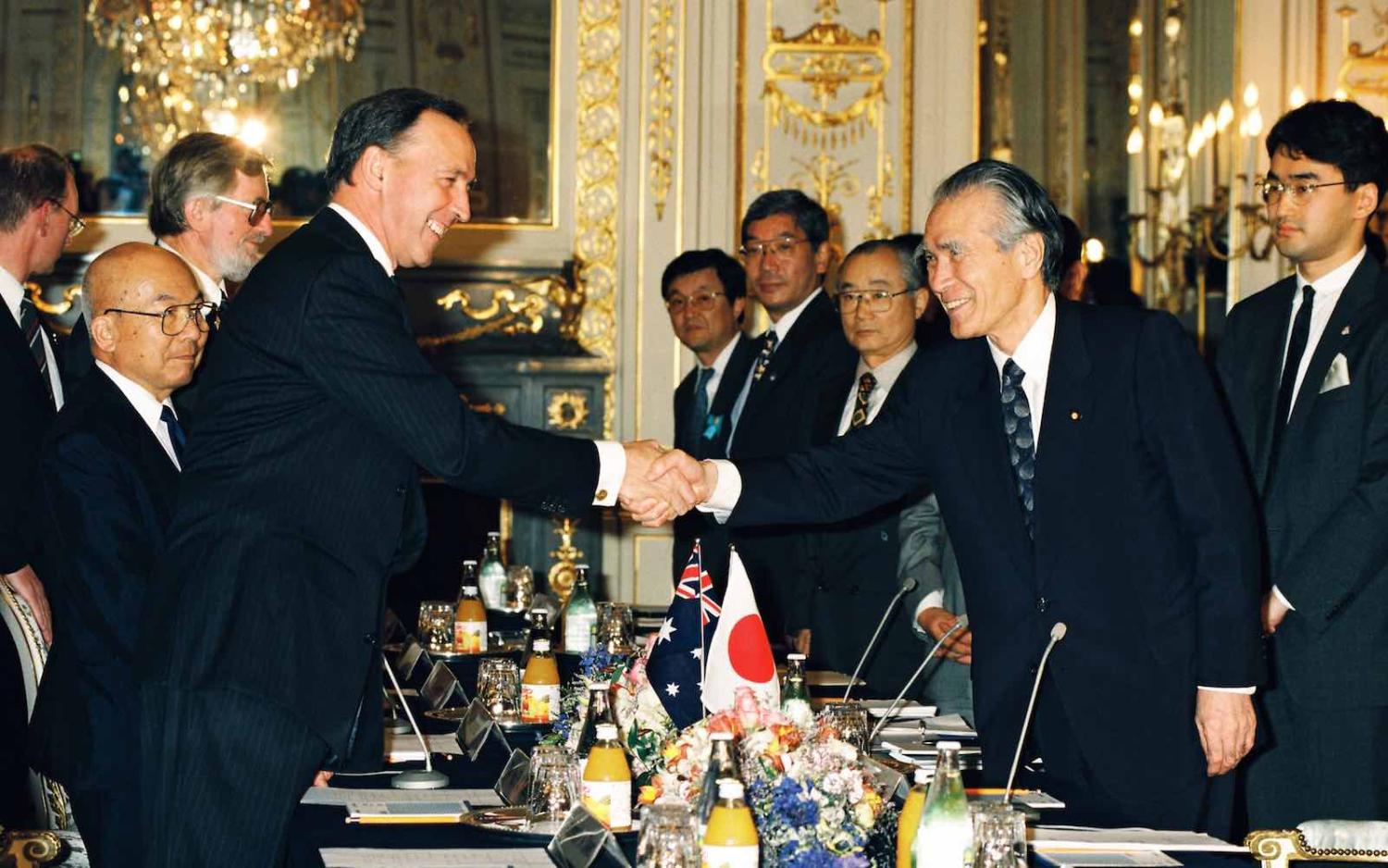 China’s barley tariffs have thrust the challenges of trade into the headlines with a prominence rarely seen in the popular Australian media. Although a crucial basis of national prosperity, the “trade” side of Australia’s international engagement has seemingly always had a lower profile than the “foreign affairs” aspect.

Yet the history of Australia’s trade, as told by key players involved, offers plenty of lessons for the present. The perspectives offered in a series of interviews over the course of a substantial research project are instructive about shifts in philosophy and tactics, ambition and attitudes.

Asia has long been a key focus. Paul Keating was known as passionate advocate for Australia’s engagement with the Asia-Pacific.

John Howard was very diligent in building relations in Asia, but his heart was really in the Anglo-American world. Bob Hawke was managerial and competent in Asia. I would say Paul Keating put himself on the line over Asia, like he did in Aboriginal Affairs with the famous Redfern speech. Keating was a risk-taker – a calculated risk-taker, not a reckless one – but a risk-taker, nonetheless. He had confidence in himself and confidence in Australia that the country could do great things as part of the Asia region.

It was Keating himself who once famously said, “We get our security in Asia, not from Asia.”

In preparing this essay, I had the pleasure to interview Paul Keating (and four other former prime ministers), but the more I got curious, the more I realised Paul Keating wasn’t the first Australian leader to advocate closer relations with Asia, although he clearly was one of the most passionate and articulate and accelerated our relationships with the region with confidence. But Australia’s relations with Asia go back a long way, well before our Parliamentary institutions were established by European settlement, especially in terms of trade.

Trade has dominated the Asian engagement story in recent years, but it has a long history. In fact, Australia’s first traders with Asia were the Indigenous people of Arnhem Land, who met fishermen from Makassar (now part of Sulawesi in modern Indonesia) in the 17th century to trade trepang (sea cucumber, which was thought to be an aphrodisiac). Trade saved the convict colony of New South Wales in the 18th century from economic ruin, and Chinese migrants to the gold rush in the 19th century helped develop Australia’s retail sector, many taking the concept back to the major urban centres of China with them.

It was really the post–Second World War period that saw Australia’s trade relations with Asia accelerate. In some ways, they can be seen as the four “waves” of Asian economic engagement.

And there were further forays of trade into Asia. The colonies (now states) tried a few trade missions in the later 19th century and in after federation in 1901, Australia set up a Trade Commissioner in Shanghai in the 1920s, in Tokyo in the 1930s (despite objections from the British Foreign Office) and even in Batavia (now Jakarta) in the Dutch East Indies. But war, depression and war again put a stop to this Asian engagement (as British interests tried to curb Australia’s trade with Japan in the 1930s, for instance) and the Ottawa Agreement of 1932 cemented Imperial trade preference within the Commonwealth (British Empire), excluding those outside “the pink bits on the map”.

But it was really the post–Second World War period that saw Australia’s trade relations with Asia accelerate. In some ways, they can be seen as the four “waves” of Asian economic engagement, as waves are distinct but can be overlapping.

For instance, the first wave occurred in the 1950s, when it was the Country Party leader and trade minister Sir John “Black Jack” McEwen who forged the Commercial Agreement with Japan in 1957. The agreement – signed by McEwen and Japanese Prime Minister and Foreign Minister Nobusuke Kishi (grandfather of current Japanese Prime Minister Shinzo Abe) – gave Australia a beachhead into the Asian century and allowed Japan back into the multilateral trading system after the horrors of the war and the militarist regime. Despite fierce opposition from the Returned and Services League, it worked, and in less than a decade, Japan had overtaken the UK as Australia’s number-one export destination and later become a major foreign investor in Australia.

In some ways, on the Coalition side of politics, the Country (National) Party drove Asian engagement as much as the Liberal Party, if not more. Nationals leader Tim Fischer was a champion of closer ties with Asia, particularly with Thailand, and as former leader Doug Anthony reflected, his party wanted to “pivot” towards Asia more than Menzies did:

Unlike Menzies, McEwen wanted us to do more in Asia. And just as well he did, because when Britain later joined the Common Market, they wanted nothing to do with us, and luckily, we had developed these alternative markets in Asia by then. McEwen and public servant Jack Crawford really started it all off.

And according to Anthony, it suited both McEwen and Menzies to let McEwen take the lead on the Japan agreement. Anthony recalls:

Menzies let McEwen pursue Japan, given the political risk involved and the fact that Menzies was more comfortable with the UK, given his love of Britain’s legal and academic institutions. Menzies didn’t want to push ourselves into Asia too much.

In the 1970s, we saw the second wave of engagement, when in 1971 it was Labor’s turn, as opposition leader Gough Whitlam, on the eve of becoming the first Labor prime minister since 1949, decided to travel to Peking (Beijing) and make it party policy to recognise China. It was a huge risk at the time, given the Cold War was still on, and Whitlam faced much criticism for it. But that soon subsided when it was revealed that Henry Kissinger was also in Beijing, as he and US President Richard Nixon were planning the same course of action as Whitlam. Whitlam won the election and visited Beijing in 1973 as prime minister.

For Whitlam, there was also the dreaded White Australia Policy to be rid of. Whitlam’s logic was that you can’t trade with people if you don’t let them in your country, and he and South Australian Labor Premier Don Dunstan made sure that immigration policy was not determined by race. As Whitlam later said: “The White Australia Policy, championed by the labour movement as anyone else, crippled our credibility in Asia for a century.”

Of course, Whitlam got a lot of credit for China, even from the Country Party (now National Party), whose leader Doug Anthony once said:

Gough‘s trip to China surprised us all. Gough always wanted to take a risk and make a big statement with everything, including foreign policy. I thought Hawke and Keating were intelligent and disciplined. Gough was intelligent, but his government had no discipline, with all the grog hanging around ministerial suites in the morning.

Whitlam also got credit from within his own ranks on China as a foreign policy achievement more than an economic one. As former prime minister (then ACTU president) Bob Hawke said about Whitlam:

“What Gough knows about economics you could write on the back of a postage stamp and still have some room to spare.”

Hawke, in his dual roles as both ACTU and ALP President, had wanted Gough to focus more on economics, and just before the 1972 election, at the ALP federal executive, he said: “Gough … you’re going to do some great things in government in the social welfare area and international … but your government will live or die on how you handle the economy.”

Then came the third wave, the Hawke-Keating Labor reform era of the 1980s and 90s. These “big picture” reforms made a once-in-a-generation difference to Australia’s future prosperity. Opening up the economy, reducing tariffs, floating the exchange rate and setting up new regional institutions like APEC, and actively engaging in the region (e.g., Foreign Minister Gareth Evans’s peace negotiations in Cambodia). Bob Hawke’s championing of Chinese students in a tearful speech in the aftermath of  Tiananmen Square was symbolic of his passion for China and better relations with Asia, and after a hard nine years as a reforming treasurer, Paul Keating made engagement with Asia the centrepiece of his prime ministerial vision for the nation’s future.

Finally, the fourth wave came, post–Hawke-Keating, when both sides of politics made significant contributions during global economic downturns. John Howard and Peter Costello kept their nerve during the Asia Financial Crisis of 1997–99, as did Kevin Rudd’s Government during the Global Financial Crisis of 2008. The domestic stimulus package designed by Treasury secretary Ken Henry, “Go hard, go early, go households”, stimulated local economic activity and employment – as did the China and ASEAN stimulus packages – and Australia was one of the few major economies to avoid recession.

We now have some new challenges, with the rise of economic populism and breakdown of multilateral institutions, as President Trump takes on China directly in a battle for global economic supremacy, the European Union loses the UK, Japan-South Korea tensions continue and nationalism is on the march in India. Throw in the challenges of climate change and an X-factor health issue like Covid-19, and the world economy has a lot on its plate. For Australia, our engagement with Asia will be a key factor in navigating these new storms.

In 1966, the celebrated economic historian Geoffrey Blainey wrote that Australia’s history was shaped by “the tyranny of distance”, yet that same year, Japan took over from the UK as our number-one export destination (a title held more recently by China). So even as The Tyranny of Distance was being written, the “power of proximity” was beginning to take shape, as Australia began to find its economic place in the Asian Century.

Previous Article
In Afghanistan, one step forward, but peace still a far leap
Next Article
Mauritius, Diego Garcia and the small matter of nukes

It was clear Senate Republicans would ensure acquittal, but the process put Trump’s corruption on full display.
Victor Ferguson 1 Sep 2020 09:00

Why might Beijing have chosen to use anti-dumping and anti-subsidy investigations as informal economic sanctions?