He could soon be leading the country in volatile times but what does Peter Dutton think of the world beyond the border? 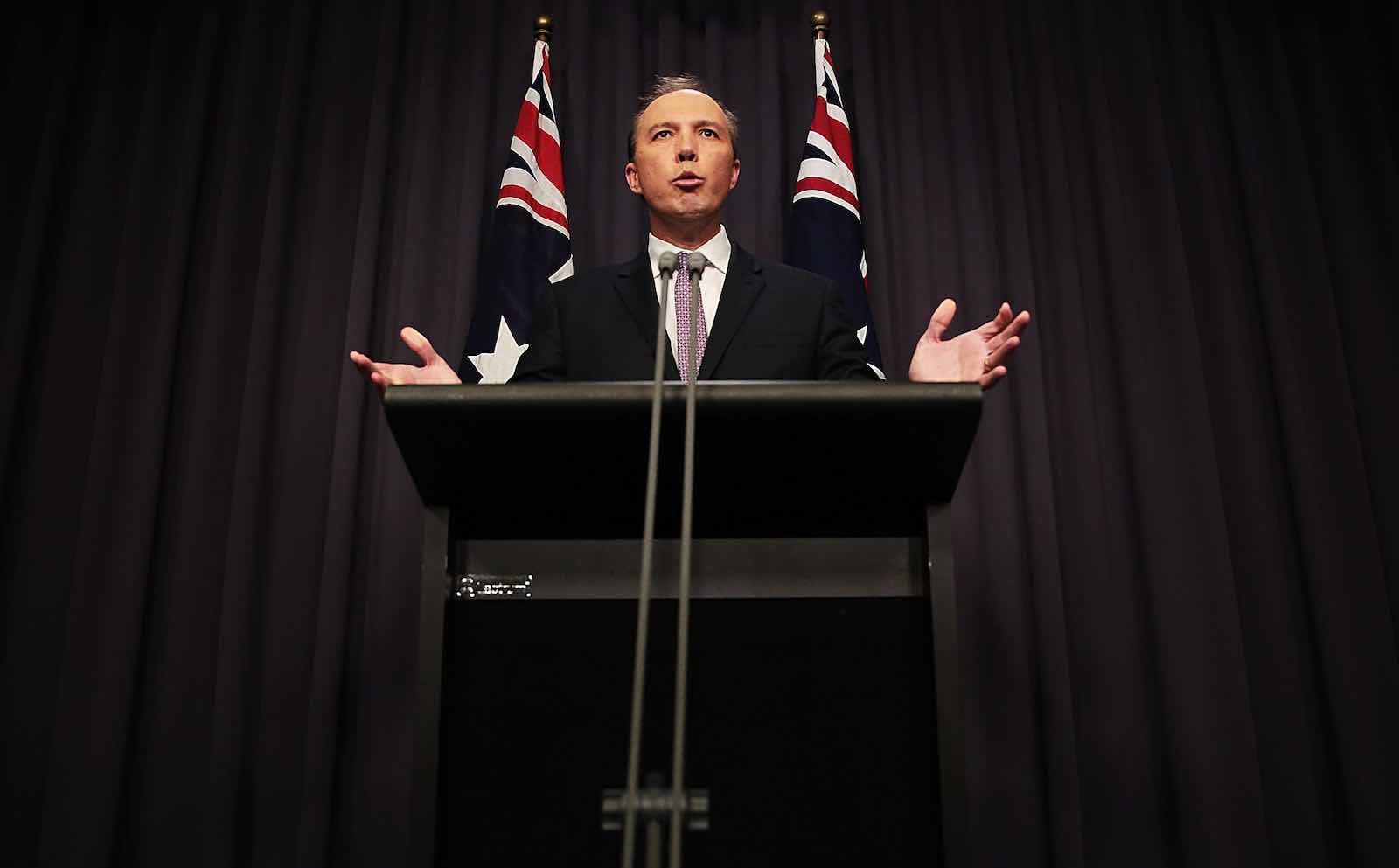 Peter Dutton was standing beside Malcolm Turnbull at joint press conference in May when a journalist asked whether Australia would move its embassy in Israel to Jerusalem, as its US ally had formally done so the day before.

“No, our embassy will remain where it is,” Turnbull responded, as Prime Minster.

But if – still an if – Peter Dutton was in the top job, would Australia’s international position on the embassy location suddenly change? Or what about on environment policy? Migration? Relations with China? Donald Trump?

Dutton’s views on international affairs – publicly at least – amount to sharp outlines, with only a few shades offered to fill in the contours. As he admitted himself, after falling just short of toppling Turnbull in a party room ballot on Tuesday, Dutton is better known as a politician who never smiles.

Rather than speaking on themes of engagement, Dutton regularly talks about borders, controls, and threats.

He has not offered a grand sweeping vision of Australia’s place in the world. His portfolio responsibilities in government have predominantly focused on hard-edged security matters. His political style is punctuated by attacks – warnings about “an armada of boats heading to Christmas Island under Labor”, the danger of “African gangs” in Melbourne, or “illiterate and innumerate” refugees common headline-grabbing examples.

Rather than speaking on themes of global engagement, Dutton regularly talks about borders, controls, and growing threats.

Unlike Turnbull, who before becoming PM delivered philosophical speeches about Australia’s foreign interests, or Tony Abbott, author of a book that touched on worldly challenges, or Kevin Rudd, with a background immersed in diplomacy, Dutton has not sought to lay out a manifesto on how to guide the nation internationally.

Julia Gillard was criticised for conceding foreign policy was “not her passion” soon after taking the job. But she quickly grew accustomed to dealing in the international arena and put her own stamp on diplomacy. The role of the prime minister demands it.

So where exactly would a Prime Minister Peter Dutton lead Australia if he can seize the chance? How would he position the country in these turbid times?

There are hints of his worldview in several speeches and comments Dutton has made over recent years. He has called Indonesia a “very, very crucial friend” and made the country his first overseas destination as Home Affairs Minister – the context, again, the prism of security against terrorism or disrupting people smugglers. He also praised Sri Lanka for cooperation on border policy. Speaking at the United Nations he emphasised the benefit of “safe, orderly and well managed migration”, and, conditioned by his experience with border protection, told Policy Exchange in London about the complex growth of distant threats.

But perhaps Dutton’s most notable remarks are found way back in 2003, when parliament debated the prospect of an invasion of Iraq.

Then a backbencher in his first parliamentary term, Dutton laid out what he saw as a “moral” case for Australian action. Much of the speech was boilerplate rhetoric from the time, that “the Australian people would demand that we deal with this threat in a way that serves our national interest”. But there was also some exposition.

John Howard had been criticised for deploying Australian troops to the Middle East, while still maintaining his government had not committed to take part in the war. Dutton defended the decision, arguing this fit with a wider responsibly for the nation:

Australia has chosen to forward deploy elements of the Australian defence forces as part of its moral obligation to ensure where possible ongoing stability around the world.

One past speech is not a reliable guide to the future. But the sentiment Dutton outlined in 2003 would be familiar in the longstanding debate about Australia’s responsibility to preserve what is now usually called the “rules-based order”. Dutton went on to back the US alliance as an “equally important” reason for the deployment, a relationship “paramount to our nation’s security and a key part of our nations’ close ties”.

China will doubtless wonder how far Dutton believes the moral obligation extends, should he ever be asked whether to send Australian warships to disputed parts of the South China Sea.

Yet in many ways, Dutton’s attitude would be in keeping with Turnbull, as much as Turnbull was in keeping with Abbott – a broadly similar approach to foreign policy distinguished more by personality that substantive difference.

Abbott was prone to Manichean outbursts – the “death cult” and the “shirt-front”. Dutton delivered a speech to the Liberal Party-aligned Menzies Centre last year, thundering that “appeasement has failed in the past and it will certainly not be a feature of this government’s posture”. Turnbull also angered China by perceived intemperance, invoking Mao Zedong and the famous “stand up” over foreign influence.

Yet all three share a view on the moral case for turning back asylum boats that Dutton outlined in a 2016 speech at the Australian Strategic Policy Institute. Each also agree, as Dutton has said, that Australia is a free-trade nation.

Broad consistency should not be equated with the absence of change. Should Dutton rise to the prime ministership, he would be immediately under pressure to switch Australia’s stance on totemic international issues for conservatives. Asked recently about negotiations on the UN Global Compact on Migration, Dutton was blunt: “we’re not going to surrender our sovereignty”. While he has called for multilateral cooperation in some areas, notably in tackling cyber threats, this instinct does not extend to all.

He was infamously caught joking by a live microphone in 2015 that Pacific islanders are “about to have water lapping at (the) door”, and it was again climate change wars that sparked the latest leadership instability. There will be pressure for Dutton to follow Trump in withdrawing from the Paris Accords.

And in diplomatic relations he will need to reconcile anger in Wellington about his practice of deporting New Zealand citizens, and his speculation of offering help to white farmers in South Africa.

Political leaders regularly claim the support of “values” for policy. During the wide condemnation of the racist speech by newly appointed senator Fraser Anning, Dutton rose in parliament to praise Australia for “values that have stood us through war, through peacetime, in drought, in natural disasters otherwise”.

But values must be defined, and there is always debate. Dutton voted “no” in the same-sex marriage postal survey, whereas the majority of Australians agreed to support a cause that has also gathered widespread international backing. He boycotted the 2008 apology to the Stolen Generation, saying it would not deliver tangible outcomes for indigenous Australians. Later he expressed regret for not appreciating the symbolism and importance of the gesture.

And debates extend to the cabinet table, and there would be plenty of jostling to help shape the Dutton worldview.

Before the latest leadership ructions, Dutton was on Sydney commercial radio last week with one favoured host. He was being quizzed after Australia hit a population of 25 million. The host wanted to know whether Dutton would support the idea of a pause on immigration.

“I’m sure if you’re Prime Minister, you probably would, but you’re not,” the host posed as a hypothetical. Dutton left the question unanswered. But now, in the wake of his party room challenge and manoeuvring for another tilt, what he decides for Australia could become startlingly real.

Show Comments
Previous Article
New faces and absent friends in Pacific diplomacy
Next Article
What did the 2008 crisis cost America?