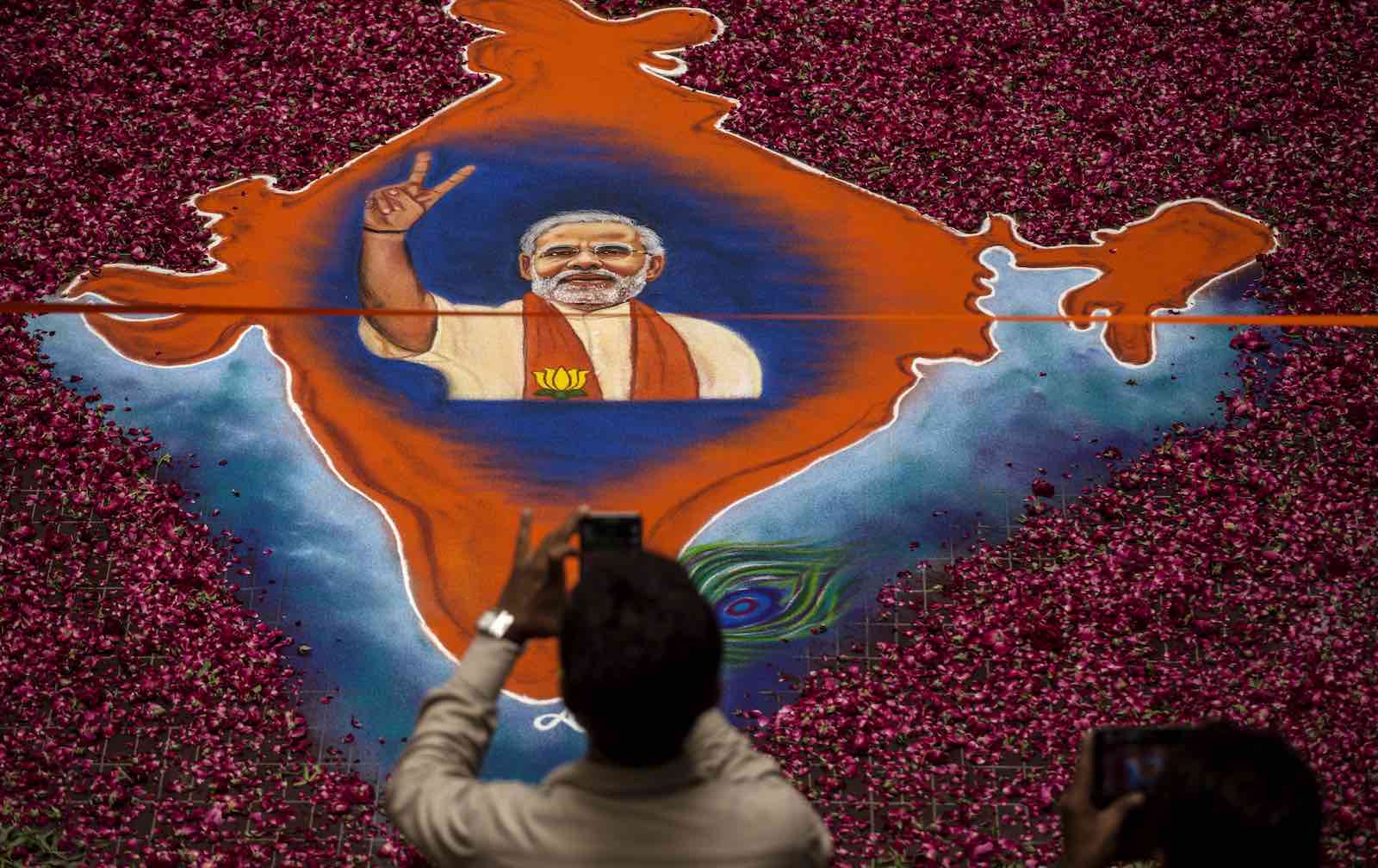 A supporter takes a picture of a map of India made of flowers with a picture of BJP leader Narendra Modi in Ahmedabad, India during the 2014 elections (Photo: Kevin Frayer/Getty)
Published 27 Aug 2018 15:00   0 Comments       Follow @pomegranitaa

In India, a recently-released report ranking the states by their governance levels has once again highlighted the great disparities between north and south.

The Public Affairs Index 2018, released last month by the Bengaluru-based think tank Public Affairs Centre, ranked states by how well they are governed, according to metrics such as fiscal management and justice. Four of the top five states are from the south, with Kerala leading the list. (It’s unlikely that anyone in Kerala is celebrating right now, however, as the state reels from its worst floods in a century.) Tamil Nadu is at number two on the survey which ranks states across a three-year period.

For all of its highs, Kerala – indeed, all of south India – is about as appealing to the central government in New Delhi as coconut oil in butter chicken.

A notable inclusion in the top three is the state of Telangana, which was created in 2014, carved off from Andhra Pradesh, after decades of agitation. For a state just four years old, the writers of the report pointed out how remarkable an achievement this is, adding that their team had earlier struggled to get access to the state’s data.

The bottom spots of the survey were taken up by states from the north: Madhya Pradesh, Jharkhand and Bihar.

The think tank, established in 1994, aims to provide a data-based framework that gives a basis to assess the performances of each of India’s 29 states. This report, released in July, is the second one by the PAC, with the first out in 2016. The group readily admits that the findings are relatively rudimentary, but points out that there is a dire need for it. “As a young country with a growing population, India needs to assess and address its developmental challenges,” said the organisation’s chairman, K. Kasturirangan at the launch of the report.

Assessing the performance of states is, in the Indian context, a wise move. After all, with its 1.2 billion-strong population, devolving power is a dire necessity (indeed, decentralising power was a key part of Gandhi’s political ideology).

States in India have a wide remit with control over water, agriculture, land rights, public health and order, theatres and entertainment, even duties on opium and other narcotics, and in some cases are as powerful as an individual country in a continent such as Europe might be. Uttar Pradesh, home to 200 million people, would be the world’s fifth biggest country if it were an autonomous nation, and regularly makes global headlines for internal state matters, such as a change of local government.

States are linguistically diverse, culturally and socially varied – for example, in the cluster of eight northeastern states which border China and Myanmar, people look eastwards for their cultural cues, eschewing Bollywood in favour of K-pop, and prefer soccer to cricket. Home to matrilineal societies, women are far more visible in everyday life than in the “cow belt” states of central India.

Kerala too, is markedly different from the north. It has the highest literacy rate in the country, at more than 93%, as well as a high life expectancy and the best gender ratio in the country. It also tops the UNDP-sponsored Human Development Index thanks to high standards in sanitation, health, education and poverty reduction. The poverty rate is under 12% (2011­–2012 state government figures), compared to the national rate of almost 22%, according to the World Bank.

But for all of its highs, Kerala – indeed, all of south India – is about as appealing to the central government as coconut oil in butter chicken. In north India, southerners are universally mocked with the pejorative “Madrasis” (a reference to the former name of the city of Chennai). South Indians are looked down on for their dark complexions, their mannerisms, even their diets. Keralites eat beef, even as the meat has become a lightning rod issue and emblematic of the rightward shift, as Hindus revere cows as sacred. (It might be worth noting that four out of the top five best-government states are not ruled by the Hindu-right BJP, but the party does preside over the three states that come last in the survey.)

Many in India point to the central government’s response to the flooding crisis last week as a key example. Prime Minister Narendra Modi, who conducted an aerial survey of the state, has committed a total of 760 crores, around $A150 million, to the relief effort. With estimates of $A3.7 billion in flood damage, many in Kerala say this falls far short of what is needed. At the same time, a handful of social media posts claimed the floods were divine justice for the beef-eaters.

With the divide between north and south so marked that you could be forgiven for forgetting they are part of the same country, there is a growing recognition by international organisations and foreign governments that it might be more effective to deal with individual states rather than the central government.

In the recently-launched report by former Foreign Affairs department secretary Peter Varghese into Australia’s engagement with India, some recommendations involve a recognition that interacting with states can help the relationship. For example, it suggests immediately upgrading the Austrade presence in Kolkata into a full Consulate-General, to help service the mineral-rich eastern states in the region; and down the track, establishing another one in Bengaluru.

The PAI survey underscores what many have been saying for some time: that targeting the states should be front and centre of anyone’s India strategy. Given India’s reputation for its bureaucratic snarls, it is a wise move, whether for business or government reasons.