Despite some increase in gender equality indicators, things are not changing fast enough in India. 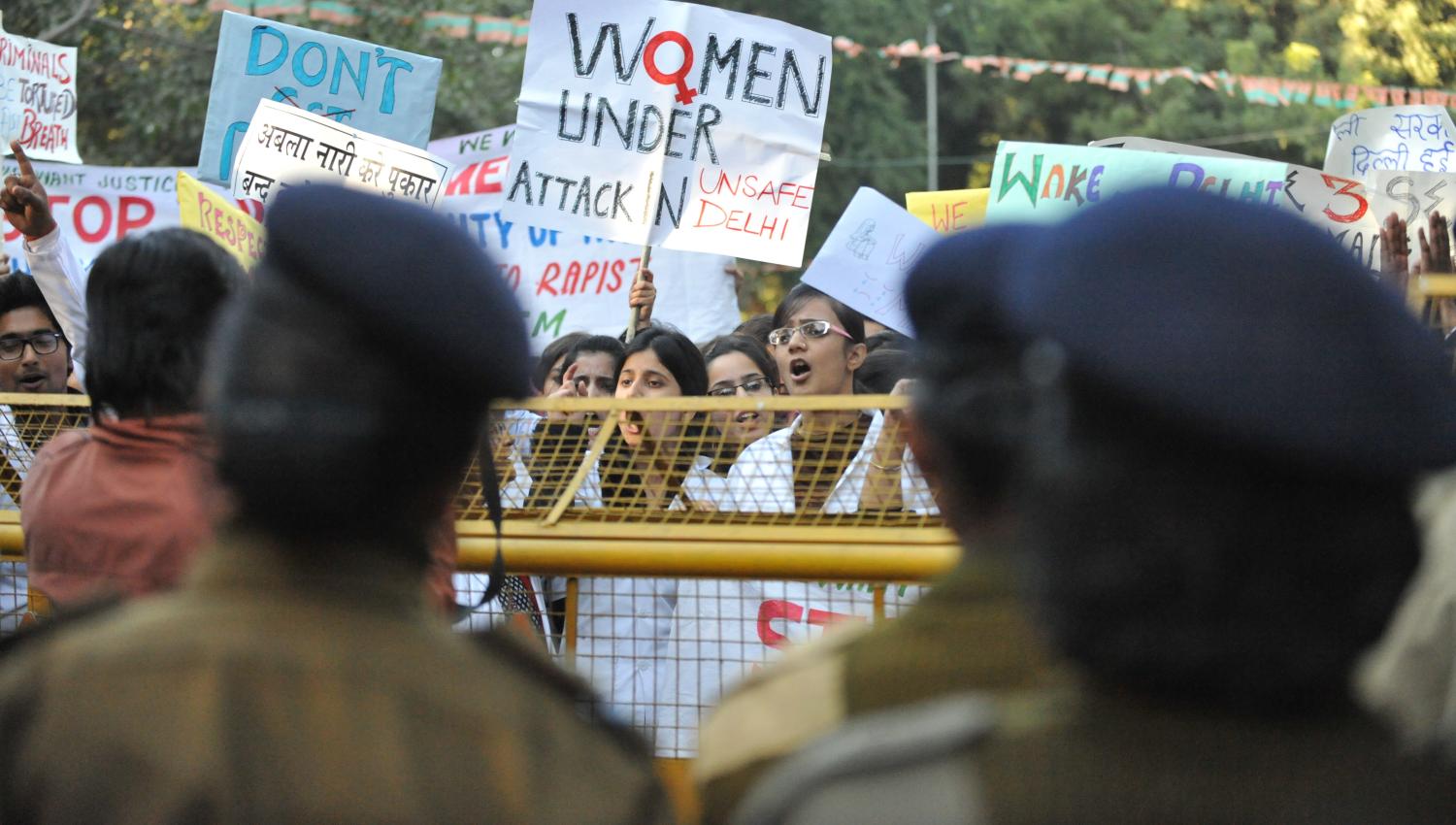 A rally in 2012 protesting the gang rape and assault of Jyoti Singh, who later died of her injuries (Photo: Getty Images/Barcroft Media)
Published 16 Jan 2017     Follow @erinwatsonlynn

Last year, I wrote in the Interpreter about Modi’s panic button policy approach to increasing concerns about women’s safety in India.

Fast forward seven months and on New Year’s Eve, in the south Indian city of Bengaluru (formerly Bangalore), women were harassed, groped, and assaulted en masse. News about the mass molestation rapidly spread across the world. Karnataka’s Home Minister G Parameshwara was quick to blame westernised clothing and behaviour of young people. ‘They try to copy westerners not only in mindset, but even the dressing ... some girls are harassed, these kind of things do happen,’ he said.

It is an all too familiar narrative. There is an enduring history of victim-blaming culture in India, from political elite through to convicted criminals.

In April 2015, during a political rally in the socially conservative state of Uttar Pradesh, former Chief Minister Mulayam Singh Yadav said in response to the conviction of gang rapists in Mumbai: ‘The poor fellows, three of them have been sentenced to death. Should rape cases lead to hanging? Boys are boys, they make mistakes'.

In January 2014, Asha Mirje of the National Congress Party in Maharashtra said that ‘rapes take place also because of a woman’s clothes, her behaviour and her presence at inappropriate places’. Congress colleagues distanced themselves from Mirje’s remarks. She later apologised and said it is her personal view, not that of the party.

And how could we forget Mukesh Singh. Singh was the driver of the 2012 Delhi gang rape bus, where five men brutally raped Jyoti Singh’, a 23-year-old physiotherapy student who later died of her injuries. When speaking to the BBC from Tihar Prison, Singh said that ‘a girl is far more responsible for rape than a boy. Boys and girls are not equal…About 20 per cent of girls are good'.

The list of examples goes on, and it exhaustively documented across the media. We are well acquainted with India’s poor track record of women’s safety. It is impossible to forget the horror of Jyoti Singh’s gang rape. Since then, the safety of women in India has been under the microscope from domestic and international observers. The number of rapes reported in India has increased significantly, and the government has introduced new laws to fast track rape cases through the legal system.

India’s Prime Minister Narendra Modi has attempted to find a solution to India’s biggest PR problem. In May 2016, Modi declared that all mobile phones sold in India from 1 January 2017 must have a panic button. The theory behind the device is that when a woman is attacked, she will whip out her mobile phone and alert her five closest friends by pressing the ‘panic button’. At the time of the announcement, much of the criticism focused on the practicality of such a button and its broader implementation.

Unsurprisingly, we are three weeks into the New Year and these panic button-enabled phones are not yet available for purchase. Poor implementation of other Government policy is partly to blame. Demonetisation of 500 and 1,000 rupee notes in India resulted in mobile manufacturers seeking an extension to the sale of old inventory, prior to taking the panic button enabled devices to market.

These public policy failures (coupled with pervasive gender discrimination and cultural norms) beg the question: what steps can we take to prevent atrocities such as the mass molestation of women in Bengaluru? It is not an easy question to answer. The 57th Commission on the Status of Women, which addressed the prevention of violence against women and girls, concluded that prevention requires both education programs and the participation of men.

While it is easy to look at India and exoticise its problem with women’s safety, India is not alone in this predicament. Here in Australia, Our Watch states that one woman per week on average is killed at the hands of their partner. One in five women has experienced sexual violence. However, the political elite of Australia have not publicly pointed the finger at women. In fact, both Tony Abbott and Malcolm Turnbull deplored Australia’s domestic violence epidemic during their respective terms as Prime Minister.

Speaking with Amanda Vanstone on Radio National’s Counterpoint, I optimistically said that there are signs of change in India. However, New Year’s Eve in Bengaluru demonstrates that despite some increase in gender equality indicators, things are not changing fast enough. India and Australia both have a long road ahead to make progress on these significant challenges that impact such a large number of our populations. To address these shared challenges there is an opportunity for Australia and India to collaborate. To do so, we need strong and consistent leadership from men and women; increased dialogue between policy makers and civil society; and accountability of public policy through measureable and publicly reported outcomes.

The Chinese-run port in Pakistan, a vital part of the belt-and-road plan, may have found a path to success.
Alexandre Dayant 25 Sep 2019 09:30

Links and stories from the aid and development sector
Max Walden 9 Aug 2018 12:00