Japan is again hunting whales. What can be done?

As G20 leaders gathered in Osaka, Japan let loose the whalers and the international response has so far been muted. 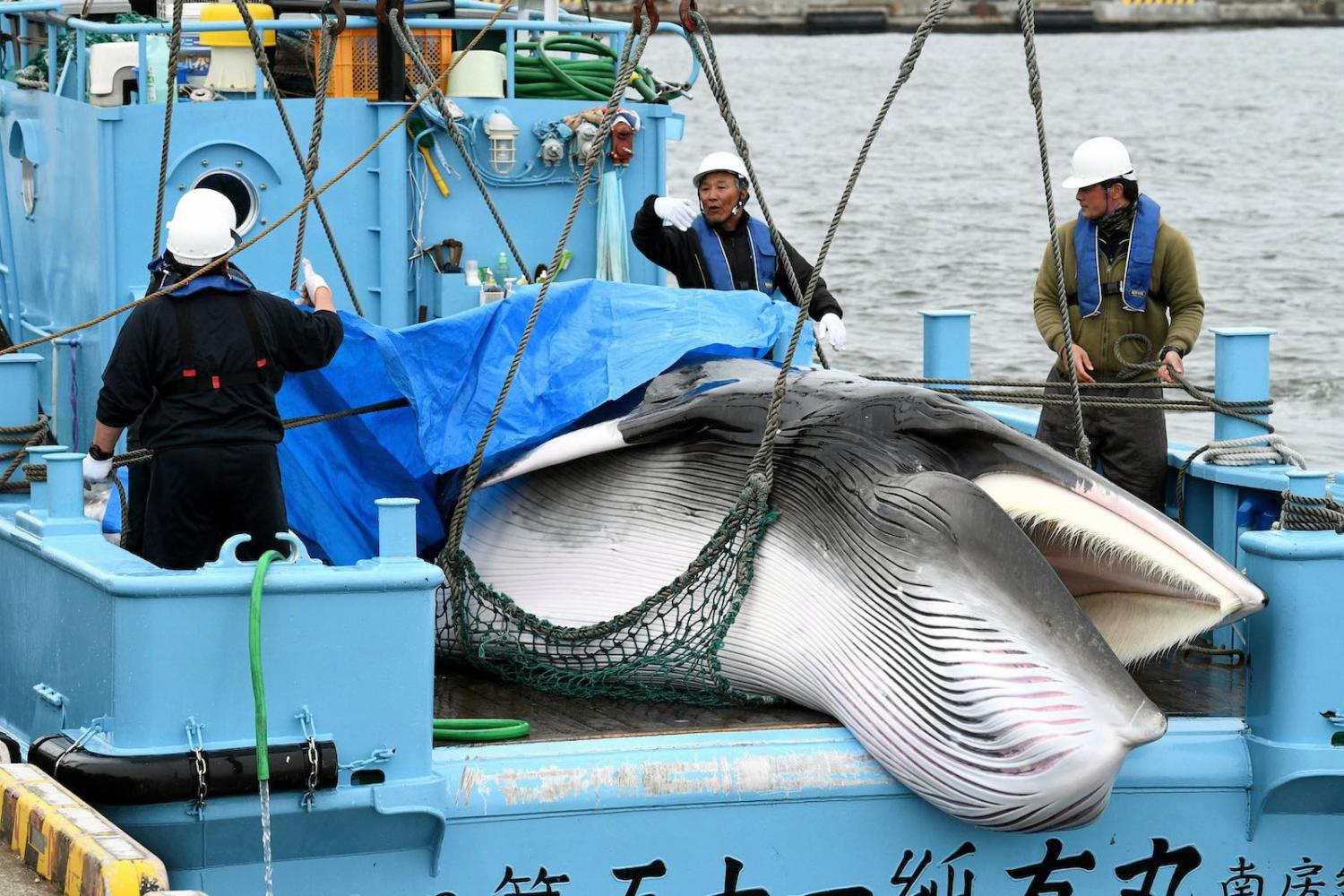 A minke whale is unloaded at Kushiro Port on the first day of the commercial whale hunt, 1 July 2019, in Kushiro, Hokkaido, Japan (Photo: The Asahi Shimbun via Getty)
Published 5 Jul 2019

This week Japan has formally recommenced commercial whaling for the first time in over 30 years.

A small Japanese whaling fleet left port on 1 July after the Japanese government announced that it had set a quota of 227 whales for the remainder of 2019. The quota is made up of 150 Bryde’s whales, 52 minke whales, and 25 sei whales. Whaling, however, is limited to the 200 nautical mile Japanese exclusive economic zone.

As such, Japanese whalers will not be returning to the Southern Ocean or to the North Pacific where they have been undertaking seasonal “scientific whaling” programs since 1987.

These events are deeply symbolic for the future of the International Whaling Commission (IWC), the body established under the 1946 International Convention for the Regulation of Whaling. Japan, along with Australia, has been one of the longest standing members of the IWC and has remained loyal to the Commission, notwithstanding the 1982 moratorium on commercial whaling that commenced in 1985.

Japan responded to the moratorium by commencing two whale “research” programs in the North Pacific Ocean (JARPN) and the Southern Ocean (JARPA). These programs were designed to be consistent with International Whaling Commission rules, particularly Article VIII of the Whaling Convention that permitted “special permit” whaling conducted for the purposes of scientific research. During the conduct of these and later programs named JARPNII and JARPAII, Japan continually asserted its conduct was consistent with Article VIII and ignored non-binding IWC resolutions calling upon it to cease.

Eventually, in 2010 Australia took Japan to the International Court of Justice which ruled in 2014 that Japan was not conducting itself in accordance with Article VIII and that its JARPAII program was in reality commercial whaling in breach of the Convention rules. Japan immediately halted JARPA II, but in December 2015 commenced NEWREP-A, a revised Southern Ocean research program designed to be in conformity with the court’s ruling which set an annual quota of 333 minke whales.

Japan nevertheless continued its campaign to have the moratorium overturned or to at least have an alternate proposal for Japanese small-type coastal whaling endorsed by the IWC.

That Japan did not release the final details of the 2019 quotas until after the G20 had ended also suggested some sensitivity from Tokyo to the issue.

After repeated IWC knock backs, Japan announced its intention to withdraw from the Convention and IWC on 26 December 2018 which took effect on 30 June. Japan, has however, indicated that it wishes to attain IWC observer status, where the next plenary meeting is not scheduled until 2020.

To date the response to Japan’s IWC withdrawal from the international community has been muted. This no doubt has partly been one of the knock-on effects from the Osaka G20 summit, where there would have been a desire to not embarrass Japan as host. That Japan did not release the final details of the 2019 quotas until after the G20 had ended also suggested some sensitivity from Tokyo to the issue. Australia’s Prime Minister Scott Morrison did not directly raise the issue of whaling with his Japanese counterpart Shinzo Abe during the G20, and has indicated that he does not wish to have the Australia/Japan bilateral relationship defined by the issue. There are also other mutual economic, trade and regional security issues that both countries are currently addressing.

Australia’s position then on Japanese whaling would appear to have shifted from the heights of the Rudd Government in 2007–2010 when the then environment minister Peter Garratt, along with Kevin Rudd, were at the forefront of the diplomatic and legal initiatives that eventually brought Japan before the International Court. Australian Foreign Minister Marise Payne’s issued a statement on 2 July observing that:

“While the Australian Government welcomes the end of whaling in the Southern Ocean, we are disappointed that Japan has withdrawn from the Convention and is resuming commercial whaling. We continue to urge Japan to return to the Convention and the Commission as a matter of priority.”

What then are Australia’s options if it wishes to continue to be the champion of whale conservation and to oppose all forms of commercial whaling?

There are legal options that could be pursued, especially under the 1982 United Nations Convention on the Law of the Sea where under Article 65 Japan is under an obligation to “cooperate with a view to the conservation” of whales, including working with the IWC for their conservation, management and study. However, the Morrison government has given no inclination that it is considering taking Japan back to an international court.

Australia will need to be resolute though if it wants to retain its opposition to commercial whaling. Japan’s actions may encourage others to rethink their stance on whaling. Iceland and Norway have over the years moved in and out of the IWC and, like Japan, maintain a small commercial whaling industry. Could then these recent events prove to be a tipping point for the IWC?

That Japan will remain an IWC observer at least allows for continuing dialogue. If Japan did to return to the IWC as Australia hopes, there is always the prospect that Japan could enter certain reservations so as to exempt itself from some of the constraints that it previously faced as both Iceland and Norway have done. Japan may have left the IWC, but its impact will be ongoing.

Global companies are looking for clean energy, but Indonesia is failing to keep up with neighbours in the region.
Morris Jones 29 Aug 2017 13:56

What is gained by shooting missiles across Japan?

Japan is being tested as much as the missile itself.