Jiang offered rare colour as a leader who saw a “strategic opportunity” for China in engaging with the world. 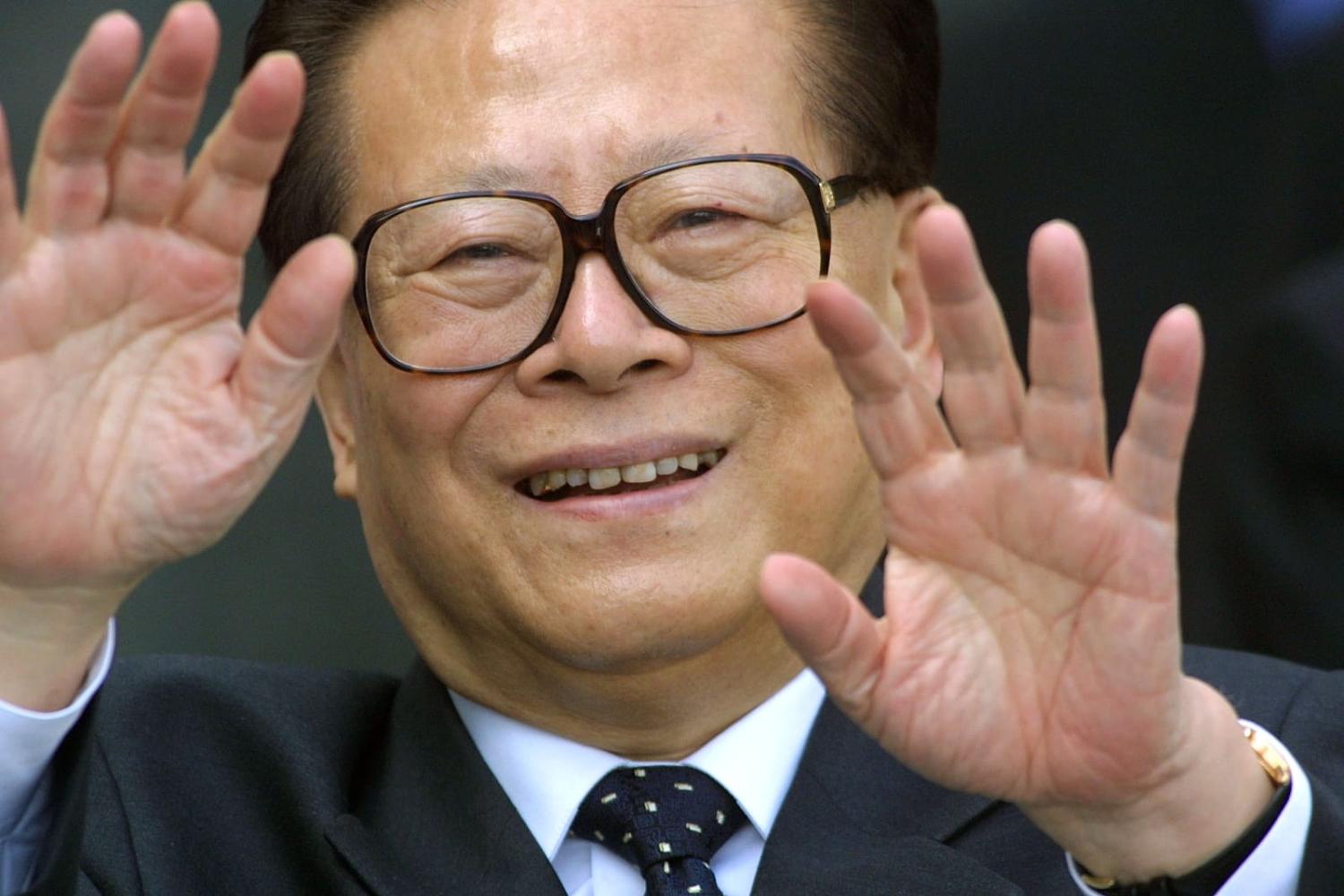 Jiang Zemin will be seen as a major figure in modern Chinese history. This is because he became the political vehicle through which Deng Xiaoping’s reform program of the 1980s survived another 20 years following the implosion at Tiananmen Square in 1989. It was Jiang’s political life and career that made it possible for the Chinese economy to grow more than ten-fold over three decades to become the second-largest in the world. Jiang’s death this week at 96 marks the final, flickering embers of that now-distant reformist age – and the unambiguous beginning of the brave, new world of Xi Jinping.

Jiang was a colourful, entertaining, larger-than-life Chinese leader in a party-political culture often overwhelmed by a thousand shades of conformist grey. I well remember his visit to Australia in June 1987 as then mayor of Shanghai when I was a junior woodchuck recently returned from our embassy in Beijing. Jiang wanted desperately to see the Sydney Opera House. I think he fancied himself, more than generously, as China’s answer to Luciano Pavarotti. Arriving in the Concert Hall, he insisted on mounting the stage before bursting into his unique rendition of O Sole Mio. The accompanying throng of Chinese and Australian officials all dutifully applauded. Perhaps fortunately, there was no actual audience in attendance. But he was happy. And we were happy that he was happy.

Under Jiang, the Chinese economic miracle was delivered in large part because the party got out of the road.

All these years later, it reminds me that, of all the Chinese Communist Party leaders we’ve seen since its founding in 1921, only Jiang had a genuine facility with English, the foundation of his fascination with the world beyond China’s shores. By the time I next met Jiang, more than a decade later, he had risen to party general secretary and national president on an official visit to Australia. Once again, his intellectual curiosity was evident as he probed our nation’s political leaders on the detailed structures of the Australian parliament and constitution.

China in the 1980s had already seen two general secretaries of the party, Hu Yaobang and Zhao Ziyang, purged for allegedly going too far and too fast on the vexed question of reforming the creaking edifice of the Marxist-Leninist state. Hu and Zhao had crossed that thin but treacherous line between acceptable market reforms to the economy on the one side, and the perilous terrain of political reform on the other.

Indeed, following Zhao’s purging in 1989, when the party concluded the entire Communist system had come close to collapse, it took Deng until 1992 to finally re-emerge triumphant over internal critics with his famous “Southern Inspection Tour”. Deng purged the party of resurgent conservatives, enjoined it to go even faster on reform and told obstructionists to get out of the road or be steamrolled in the process. Then at the tender age of 88, Deng retired to the “second line” for the last five years of his life, entrusting General Secretary Jiang and his master-technocrat Premier Zhu Rongji with the task of taking the economic reform agenda forward as rapidly as possible – while leaving systemic political reform (the killing fields for both his predecessors) well and truly alone. This would set China’s basic course for the next quarter-century.

Jiang and Zhu internationalised the Chinese economy by completing the decade-long process of accession to the World Trade Organisation in 2001, enabling China to become the world’s factory. Jiang also secured the 2008 Olympics, which would become China’s formal “coming out” party in the eyes of the world at large.

One of the consequences of Jiang’s economic reform agenda was the rise of the Chinese private sector and its stellar entrepreneurial class. This was when Jack Ma’s Alibaba, and the army of start-ups like his, came into being. For the first time, China’s private sector surpassed the moribund state-owned enterprise sector as the dominant contributor to GDP, taxation, employment and home-grown innovation. This also created a political dilemma for Jiang as the party became progressively marginalised from the real world of the Chinese economy.

Under Jiang, the Chinese economic miracle was delivered in large part because the party got out of the road. The state invested massively in building the basic infrastructure of a modern economy, including nationwide fibre-optic cable, and road and high-speed rail networks that rivalled most advanced economies. Detailed macro-economic management and micro-economic reform were left to a new generation of technocratic elites that Deng, Jiang and Hu had sent to study in the United States and other Western countries. Meanwhile, the engine-room of economic growth was delivered by the legions of self-made entrepreneurs who had left the party’s labyrinthine bureaucracies to make their fortunes, sometimes through the bargain-basement privatisation of state assets, but other times not.

On foreign policy, it was Jiang who also used the 16th Party Congress in 2002 to proclaim that China now faced a period of “strategic opportunity”.

But on the economy at large, the party as the keeper of the ideological flame of the Chinese revolution had largely become irrelevant in an age dominated by Deng’s axiom that it was “glorious to be rich”. Jiang’s response to this dilemma was dramatic. He amended the CCP constitution to allow this new generation of patriotic capitalists to enter the ranks of the party itself. This would have caused Marx, Lenin and Mao to turn in their graves.

It came at the 16th Party Congress in 2002 under the rubric of Jiang’s concept of “the three represents” whereby in the official parlance the party should represent “the development trend of China’s governing forces; the progressive course of China’s advanced culture; and the fundamental interests of the overwhelming majority of the people of China”. This was a total ideological revolution given that Mao had eliminated private property in both agriculture and commerce by 1956, when the party formally concluded that basic socialism had been established. Nearly half a century later, Jiang formally reversed ideological course.

His political logic was not dissimilar to Lyndon Baines Johnson – it was far better having potentially problematic individuals inside rather than outside the tent, and directing their creative energies accordingly. The alternative, in Jiang’s view, was to allow the creation over time of a potentially hostile political force that could challenge the party’s status as the ultimate instrument of Leninist control, if and when the country was threatened again with the “chaos” of 1989. And so Jack Ma and those like him were formally admitted into the ranks of the CCP.

Jiang could not be described however as a closet liberal political reformer. The circumstances of his unlikely political elevation in 1989 put paid to that. He also assumed astute political neutrality during the 1989–92 period when, after the near-death experience at Tiananmen, the future of the reform project hung in the balance as Deng, Chen Yun, Bo Yibo and Yang Shangkun vigorously contested the party’s direction.

Further, it was Jiang who initiated China’s first “patriotic education campaign” in the 1990s that aimed to wrap the party in a nationalist flag to help secure its long-term survival. In some respects, this was an ideological precursor to Xi’s more recent, full-throated embrace of Marxist nationalism as an alternative source of political legitimacy as the social contract built on the party’s traditional reliance on economic growth has come under acute pressure. Moreover, it was Jiang who launched the brutal domestic and international campaign against Falun Gong after he discovered that senior party members had also become practitioners. No, Jiang still believed in the role of the Leninist party, albeit as a reserve instrument of state power, rather than being on constant public display across every aspect of Chinese life.

Of all the Chinese Communist Party leaders we’ve seen since its founding in 1921, only Jiang had a genuine facility with English, the foundation of his fascination with the world beyond China’s shores.

On foreign policy, it was Jiang who also used the 16th Party Congress in 2002 to proclaim that China now faced a period of “strategic opportunity”. Properly decoded, that meant the party assessed that there was no large-scale war on the horizon that potentially involved China, thereby enabling Beijing to focus exclusively on its economic development task.

This was a remarkable turnaround from the 1990s when Jiang faced two Taiwan Straits crises with the United States over then Taiwanese president Lee Teng-hui’s decision to hold democratic elections, and Washington’s decision to allow Lee to visit the United States in 1995 despite Beijing’s objections that this violated the One China Policy. It was also a major shift from the 2000 US presidential elections when George W. Bush had been elected on a platform of repudiating China’s accession to the WTO and confronting its rapid military development. September 11 changed all that when, amid the US invasion of Afghanistan, the Bush administration sought China’s collaboration in the “war on terrorism”, most particularly against al-Qaeda, the Taliban and any spillover into neighbouring Xinjiang. US strategy towards China had been turned on its head, and Beijing was the overwhelming beneficiary.

This period of “strategic opportunity” would last until the 20th Party Congress earlier this year when the phrase was removed from the text of the general secretary’s report. Jiang also saw the China–US relationship as “the most important of the important” or “zhongzhong zhizhong”. This too would, in time, be eclipsed by Xi’s conclusion that US power was in structural decline in an age that was now seeing “the rise of the East and the decline of the West” and the birth of the China century.

Jiang’s other political legacy was his decision in 2002 to yield power to his successor, Hu Jintao, after completing two full terms (in fact, 13 years as general secretary given that he was appointed halfway through Zhao Ziyang’s term in the emergency circumstances of May 1989). Jiang was mindful of Deng’s 1981 resolution on the lessons of the Cultural Revolution, particularly those opposed to one-man rule, life tenure and the cult of personality indelibly associated with Mao. Jiang’s successor, Hu Jintao, would do the same in 2012, yielding in turn to Xi.

The end of the Deng–Jiang–Hu era was formally marked at the 19th Party Congress in 2017 – five years into Xi’s term – when he literally proclaimed the beginning of a “new era”. This new demarcation line in the complex business of the periodisation of party history was drawn at multiple levels. Xi rehabilitated the party’s central ideological, political and policy role, including in the direct management of the economy. He redefined the party’s core ideological challenge away from the central imperative of economic growth to instead focus on the excesses and imbalances generated by what he defined as the ideological laxness of his predecessors. And by the 20th Congress this year, the end of the “period of strategic opportunity” was replaced by an admonition to the People’s Liberation Army to begin preparing for war in response to China’s deteriorating external strategic circumstances. Moreover, Xi’s reappointment for a third term returns China to the pre-1981 norm of unlimited tenure. These major changes caught the world, which had become accustomed to the assumed verities of China’s recent past, largely by surprise.

In October, we saw the final political demise of Hu Jintao as he was removed unceremoniously from the stage of the closing ceremony of the 20th Congress. This month, we have seen the final physical demise of Jiang Zemin. And with it, the near-half century of what we once simply called the era of “reform and opening”, beginning with the once-celebrated “Third Plenum of the Eleventh Central Committee” in November 1978, has now been quietly consigned to history. But Jiang occupied a central chapter in that history.