France's President Emmanuel Macron is striking a pragmatic and self-confident tone in the country's foreign policy.

French President Emmanuel Macron is striking a new, pragmatic and self-confident tone in the country's foreign policy, for which he's received a lot of kudos. The recent reception for US President Donald Trump in France is a perfect illustration of this new approach.

Macron invited Trump to attend the Bastille Day celebrations 100 years after the US entered World War I. That move could have been highly controversial at a time when the US image is plummeting under the country's highly erratic President. Only 49% of respondents of a recent global poll by the Pew Research Center said they had a positive view of the country, compared to 64% under the tenure of former President Barack Obama. But six out of ten French people seemed to like the idea of having Trump join in the 14 July celebrations, according to one poll.

At a joint press conference the night before Bastille Day, Macron said that France and the US intended to jointly battle global terrorism. But Macron added that he was aware of the differences of opinion on another issue – countering global warming. Trump had weeks before announced the US would pull out of the Paris climate accord. Macron had called this a 'mistake' in an English video message with the slogan 'make our planet great again' that went viral.

Macron has also been deploying this strategy with Russian President Vladimir Putin, who was invited to the Palace of Versailles in late May, and with Israel's Benjamin Netanyahu, who visited France this weekend.

In both cases, the French leader insisted France needed to cooperate with the other country in the fight against terrorism. But he very openly criticised Russia's state media and the country for its human rights record. He also voiced support for a two-state solution, while disapproving of Israel's settlement policies.

Macron seemed frosty when it came to Vladimir Putin. No smile crossed the President's face during the joint press conference with an equally glacial Russian leader at Versailles. And Macron repeatedly said they had had a very 'direct and frank' conversation. The French leader was imitating Putin's body language. They were gauging each other. Macron's message: he could be as firm as Putin.

The atmosphere at the press conference with Trump, by contrast, was cordial, even warm-hearted at times. 'I am attached to the strong relationship between our two countries,' Macron said. He pointedly stated the two heads of state would gather with their wives the same night at the Eiffel Tower for a 'dinner between friends'.

According to de France, Macron was attempting to copy the US President's way of directly engaging with the public: 'You've got to hand it to Trump that he knows how to reach people – something Hollande seemed incapable of doing.'

De France added that Macron was trying to show that he had what it takes to be an internationally respected leader and that he could speak his counterparts' language. It's his way of giving France back some of its old 'grandeur' as a nation.

Macron is also trying to give the country more significance within Europe. Socialist predecessor Hollande had accepted the role of Germany's junior partner and tried to gain more political weight by gathering southern European countries around France.

But the new centrist President wants to be seen as on an equal footing with Germany, says Claire Demesmay, head of the Franco-German Relations Program at the Berlin-based German Council on Foreign Relations. That's why he's repeating, time and again, that he will indeed be implementing the structural reforms promised during his election campaign and bring down the public deficit.

Macron wants to make clear that France can be trusted and should therefore be taken seriously. He sees the European Union as France's natural habitat, says Demesmay. And he thinks that the country needs the organisation – and international partners – to achieve out certain political goals, such as in the areas of defence and the fight against terrorism.

For de France, Macron's performance on the international stage has been flawless so far. 'It's pretty convincing,' he said.

But of course, the President's biggest challenge is yet to come. He needs to push through wide-ranging structural reforms in a country that is seen as impossible to reform. If the reform attempts fail, his popularity abroad and at home is likely to take a hit. Unions have already announced a first demonstration for September. 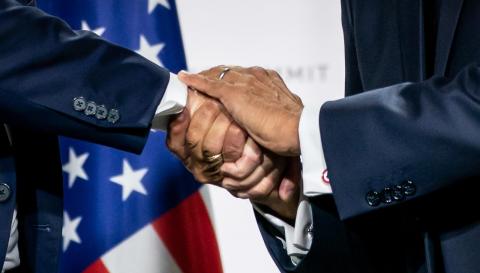